Which Forex Pair Trends the Most - 2021 Data

The present guide provides an updated review of the most trending currency pairs in 2021. Additionally, it also provides a script that you can use to calculate trend statistics for any set of trading instruments and timeframes.

Measuring a trendedness of a currency pair (or any other trading instrument) is always a challenge. It is accentuated by the problem of this trendedness changing over time. A currency pair might be trending strongly one year and be completely trendless the next year. Still, it is possible (and important if you trade the trend) to compare the trendedness of currency pairs based on a set of metrics to get a better understanding of which currency pairs trend the most and also how exactly they trend.

The post below analyzes 10 currency pairs based on five metrics. It explains how these metrics work and why they can serve as a rough proxy of a pair's trendedness.

For the analysis, we chose 10 currency pairs that three conditions: they are very liquid (according to the 2019 Triennial Central Bank Survey), they have low spreads, they are readily available at retail Forex brokers. For example, the rather liquid USD/CNY currency pair is omitted (which is the sixth most liquid in the world) because it is available only at few brokers, its spreads are high, and trading is severely restricted by the People's Bank of China. Instead, we will look at the following currency pairs for this study (presented in alphabetical order):

We use the following methods to assess the trendedness of the currency pairs:

Rate of change is calculated as previous Close minus current Close and divided by previous Close to get the percentage value. Obviously, this is a crude method of analysis. However, it can give us some hints on the pairs that trend often.

Currency pair’s volatility is calculated as candle's High minus Low divided by its Open. It is calculated in percentage points too.

The above calculation would be only a starting point. To identify the best of the trending currency pairs, we need to calculate precisely the number of periods a pair had been in a trend during some span of time. We need a dependable indicator to identify trend in three different timeframes. We use moving average for that purpose. We calculate the mean and median number of consecutive closes above/below the moving average. By ranking the average of the number of closes above/below a moving average, we can get additional insights regarding how trending the pairs are. Beginners are often advised to use an exponential moving average instead of a simple one as the former lags less (i.e. it follows a trend more quickly). We verify that as well by applying the calculations to both simple and exponential 50-period moving averages.

Consecutive Higher High + Higher Low or Lower Low + Lower High show exactly that — the streaks of bars that are formed according to one of the most popular definitions of trend.

All calculations are repeated on three timeframes: daily, weekly, and monthly. All currency pairs are analyzed using the data of 5 years back from May 21, 2021. The data is derived from MetaTrader 5 platform with a server in GMT+2 time zone, which means that the weekly session goes from Monday 00:00 to Friday 23:59.

We can calculate the absolute change in the exchange rate of a currency pair in a given period (day, week, month), using the following formula:

where N is the total number of periods.

The median rate of change is calculated by sorting the individual rates of changes (Tn) and either picking the middle one (for odd number) or calculating the mean of the two rates of change.

We have to use the percentage values because the direct (pips) rate of change would differ significantly among currency pairs as their exchange rates are not comparable.

The table provides the 5-year mean and median percentage (%) rate of change values for the studied currency pairs for three timeframes from May 22, 2016, until today.

The table above shows how mean and median changes (per day, per week, and per month) differ among currency pairs. The first noticeable thing is that they don't vary by a lot — there isn't a case where one currency would show twice the average change of the other. Let's look at the charts below to better analyze the differences among the currency pairs' average change for the period.

Unlike in the previous year, there was no clear winner across all timeframes this year. Judging by the mean change, GBP/JPY demonstrated the biggest daily and weekly rate of change but was only the third on the monthly timeframe, coming behind NZD/USD and AUD/USD. As for the median change, the clear winner was NZD/USD, though its daily 0.37% rate of change was the same as for GBP/JPY. As for the pair, it was almost universally USD/CAD, closely followed by USD/CHF. Other notable pairs were EUR/USD and EUR/GBP. On the daily timeframe, the difference between the fastest 0.49% mean change of GBP/JPY and the slowest 0.32% change of USD/CHF was not particularly big. On the monthly timeframe, the situation was different, especially when comparing the median change. The change of 2.46% for NZD/USD was more than two times bigger than 0.85% for EUR/GBP. 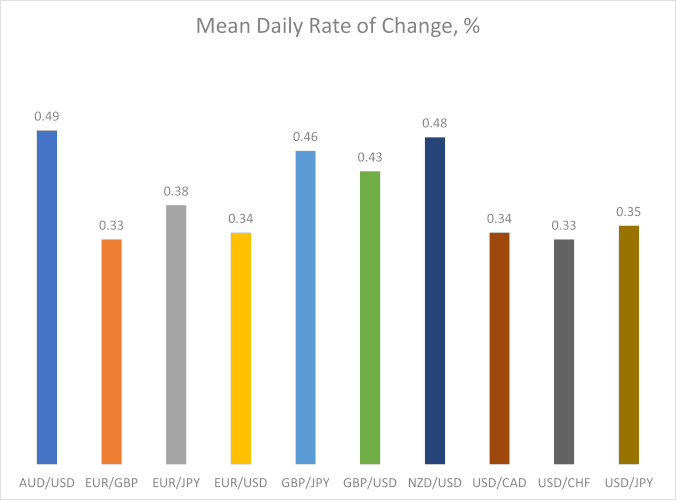 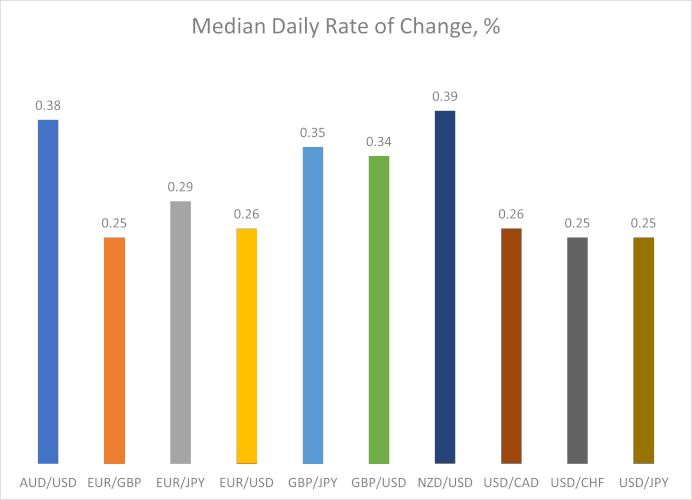 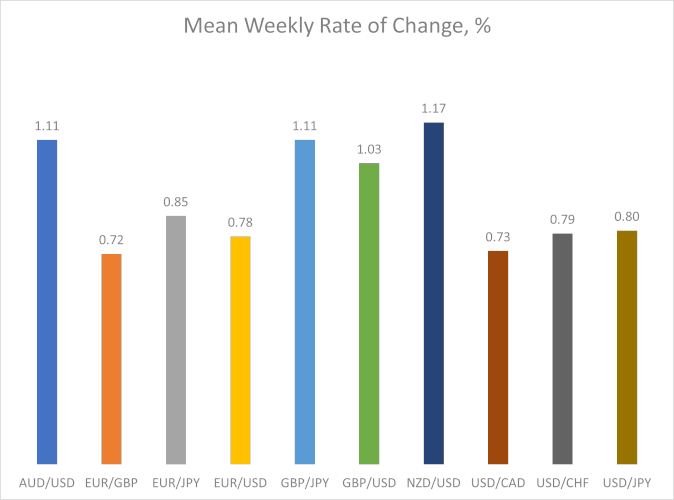 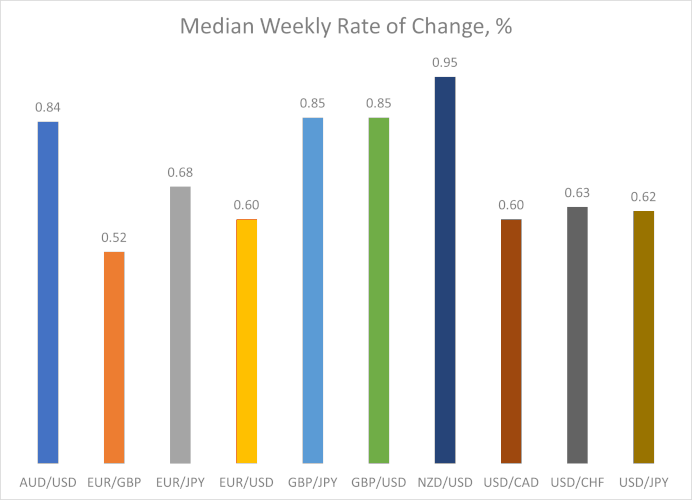 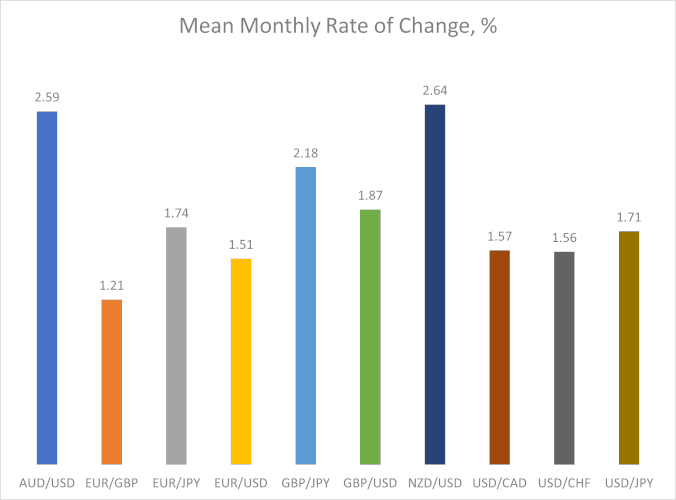 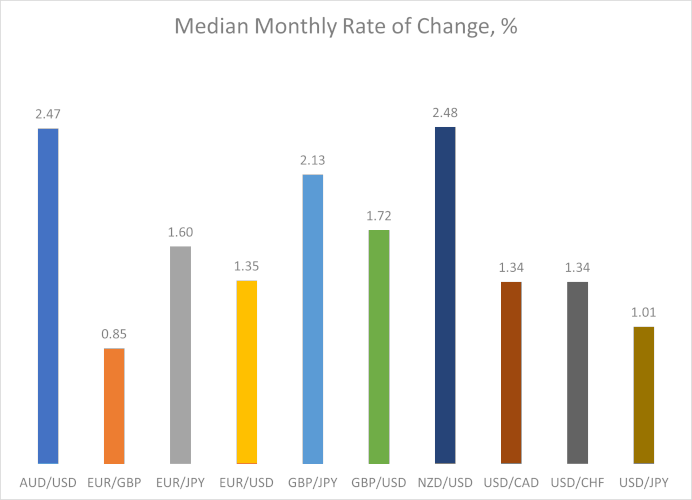 The volatility of a currency pair can be calculated using the formula:

where N is the total number of periods.

The median volatility is calculated by sorting the individual volatility values (Vn) and either picking the middle one (for odd N) or calculating the mean of the two value (for even N).

The table summarizes the mean and median percentage (%) volatility values of the studied currency pairs for daily, weekly, and monthly timeframes from May 22, 2016, till May 21, 2021.

GBP/JPY is leading in volatility across all timeframes except when measured by median weekly volatility (where there is NZD/USD at 1.94%). NZD/USD ends up second across all three timeframes in both mean and median measures, except for the median weekly chart. USD/CAD and USD/CHF were the least volatile pairs by all measures on almost all timeframes, though EUR/USD was close, being the second least volatile pair by the median measure on the monthly timeframe. 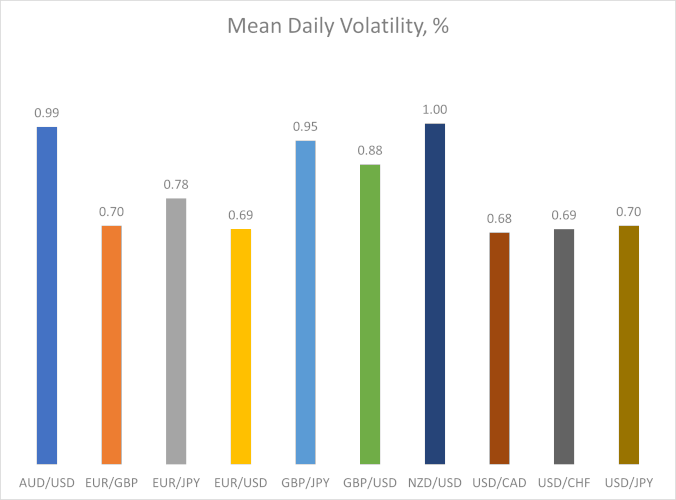 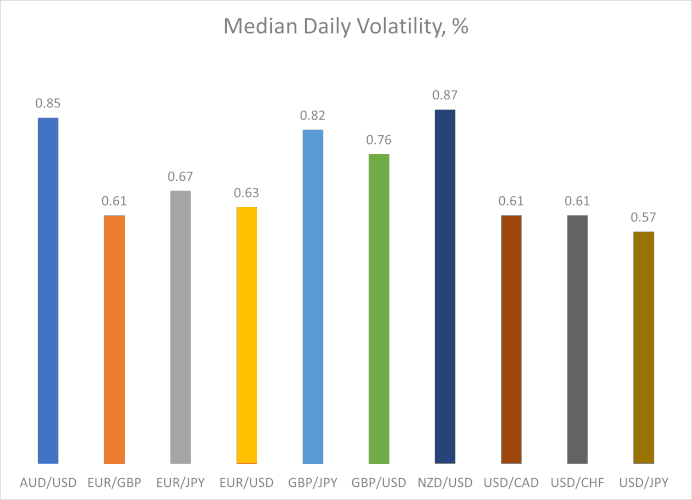 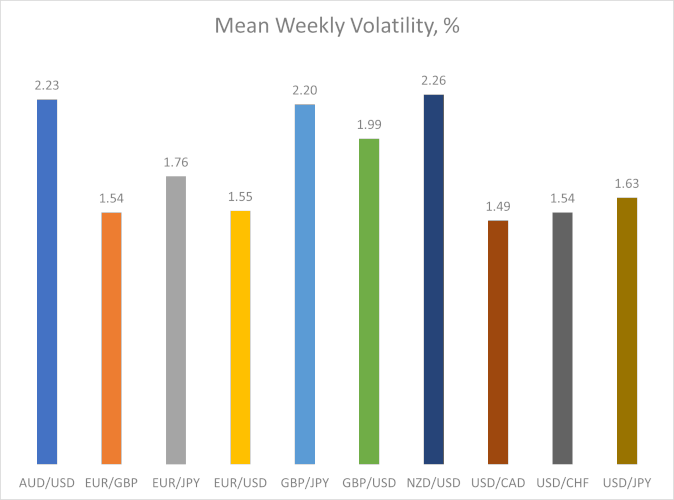 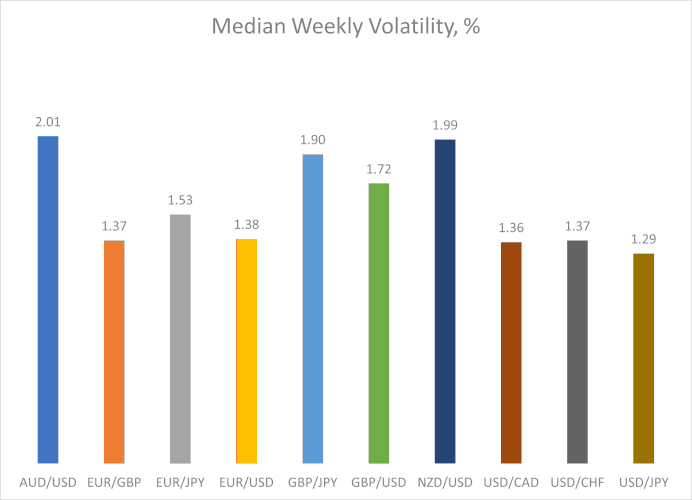 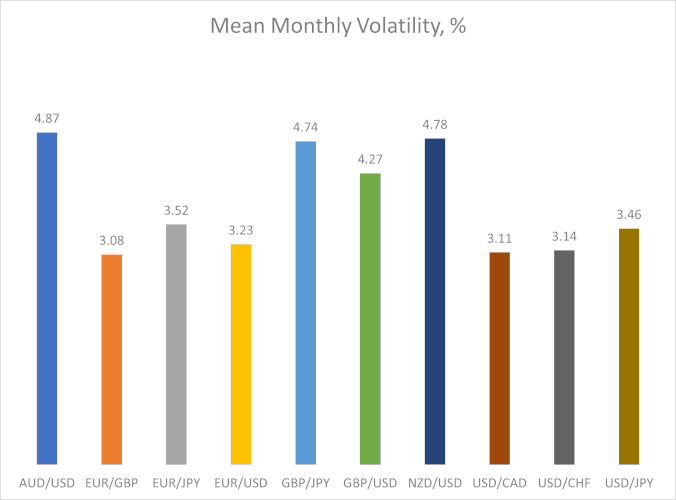 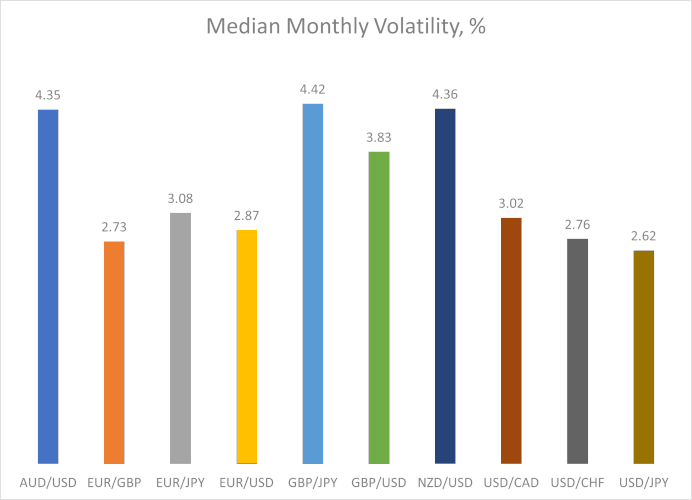 One of the most intuitive methods to detect Forex trends is to use a moving average. We calculate the mean and median number of consecutive closes above and below a 50-period (daily, weekly, and monthly) moving average (both simple and exponential).

Unlike previous measures of trendedness, consecutive closes below or above moving averages seem to result in more significant differences between the pairs. For example, when compared to the SMA, the median number for GBP/JPY pair is 7.0 periods, while it is only 3 for such pairs as EUR/GBP and EUR/USD. This means that GBP/JPY tends to stay more than twice longer above or below a moving average compared to those pairs. The comparison of other pairs is well illustrated by the charts below. 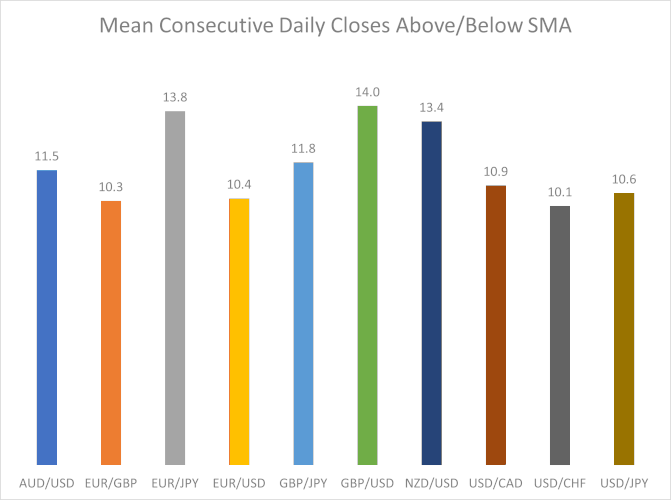 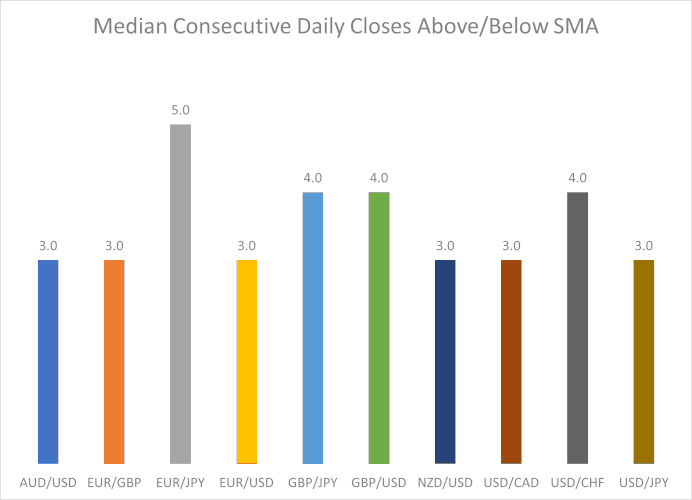 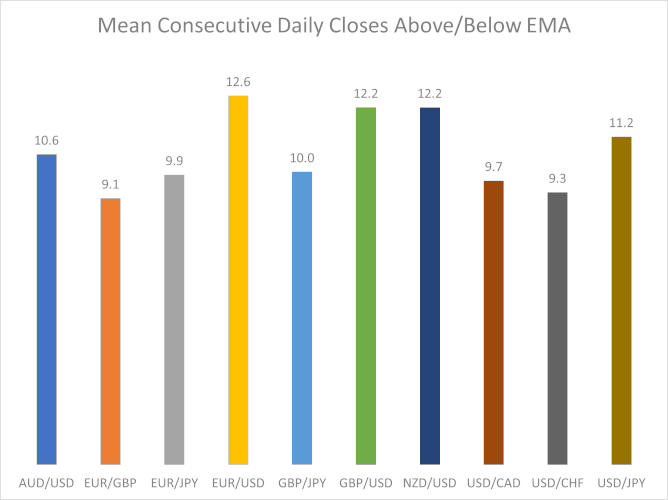 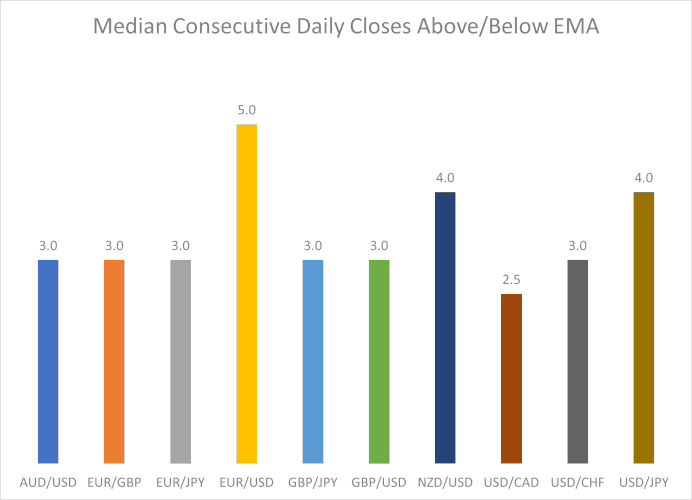 The table for the consecutive weeks above and below the moving averages is presented below.

Rather surprisingly, each chart had its own winner on the weekly timeframe. GBP/USD came first with its 13.3 mean value of above/below SMA periods, though AUD/USD and EUR/USD were close behind, with 13.1 and 13.0 respectively. NZD/USD was the winner in the median value, with its 5.5 result being noticeably above the next best 5.0 of AUD/USD. Turning to EMA, EUR/USD was the winner with the mean value of 14.1, though AUD/USD was not lagging far behind with 13.9. And AUD/USD came out first in the median value of consecutive weekly closes above/below EMA, with its result 8.0 was above any other competitors. EUR/GBP took the second place but was far behind with its 5.0. 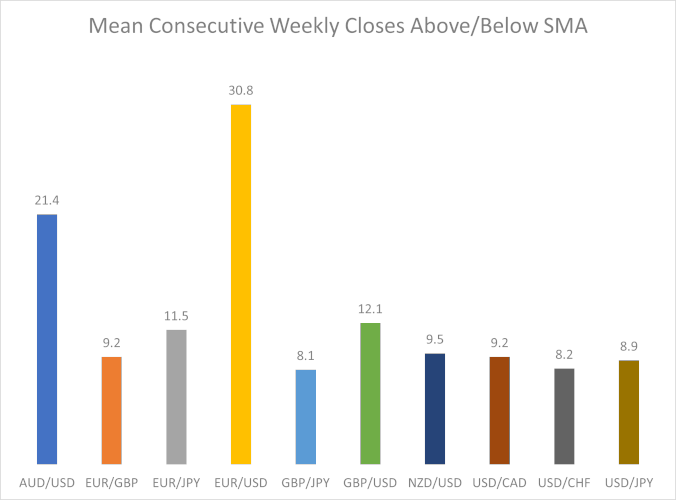 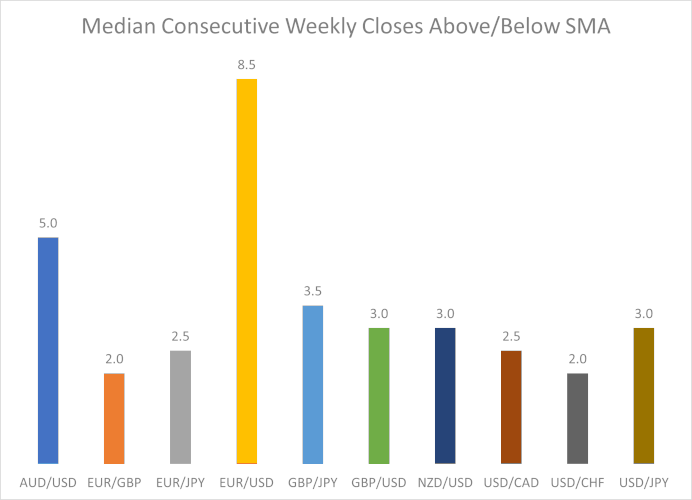 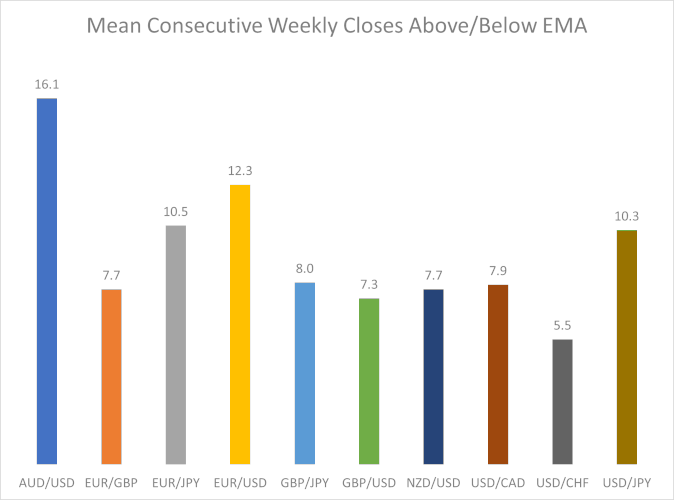 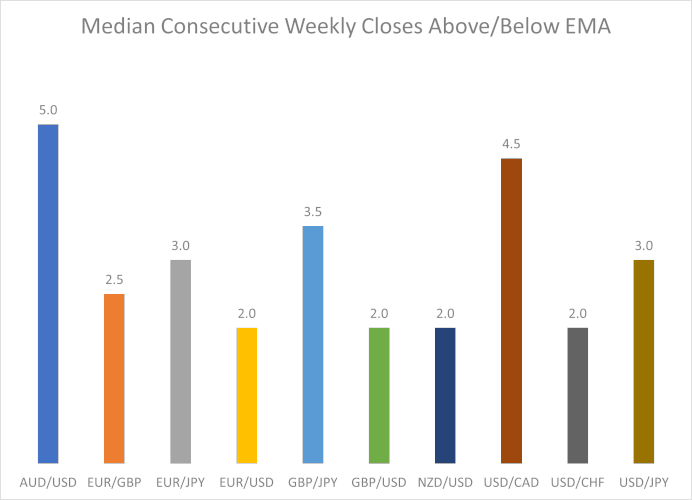 The table for the monthly data is presented below. Unfortunately, it doesn't offer reliable information because 5 years contain not so many monthly candles to work with.

As you can see on the charts below, GBP/JPY gets an undeniable lead but that's just because we only have 60 monthly candles to look at, and this currency pair spent nearly all of them trending below or above the moving average. Still, the data can be useful to get the idea of how some pairs (I am looking at you, EUR/JPY) traded in a whipsawing sideways market on a monthly timeframe. Another interesting point is that three pairs — GBP/USD, NZD/USD, and USD/CAD — show the same number of mean monthly closes above/below EMA — 10.4. 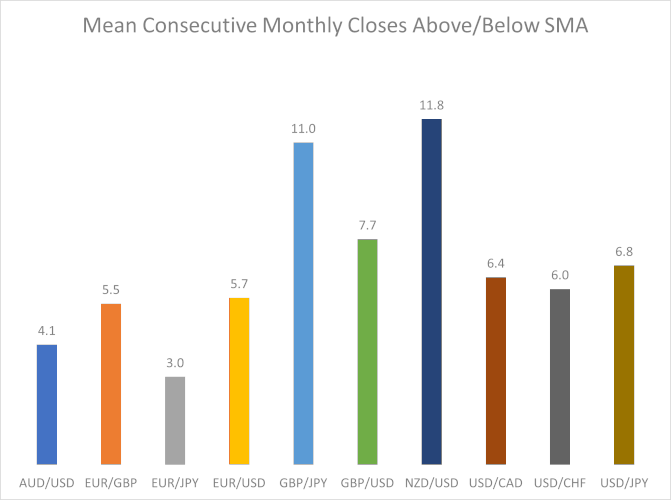 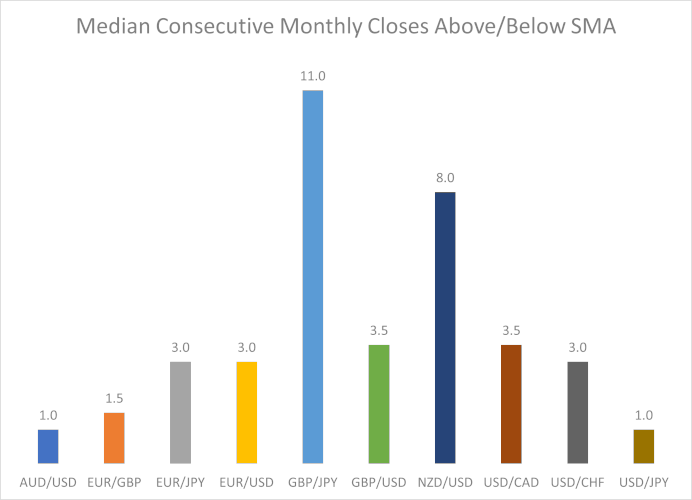 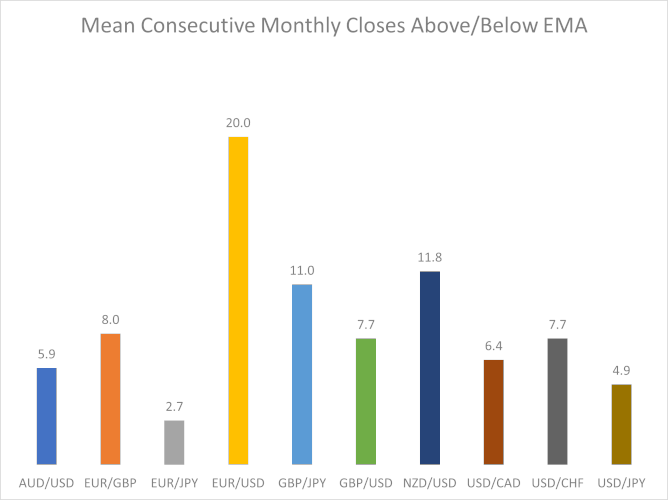 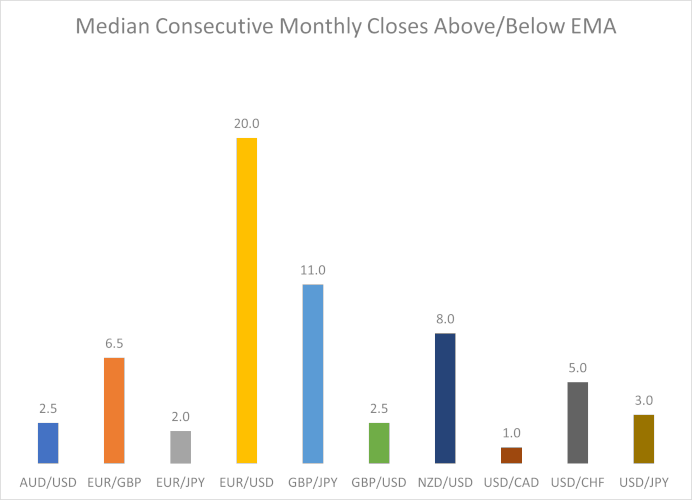 A currency pair is generally believed to be trending if it forms consecutive Higher Highs with Higher Lows (HHHL) in an uptrend or Lower Low with Lower Highs (LLLH) in a downtrend. We calculate the mean number of HHHL and LLLH patterns for each currency pair on the daily, weekly, and monthly timeframes.

On the charts below, you can see the illustration of the data presented in the table above. Mean consecutive HHHL/LLLH days are the highest for USD/JPY and EUR/USD while being the lowest for USD/CAD. It is interesting to see that currency pairs were almost at the same level on the weekly timeframe. Just two pairs deviated from the trend noticeably - GBP/JPY to the upside and EUR/USD to the downside. It is extremely peculiar considering that the monthly chart shows the completely opposite result - EUR/USD demonstrates the highest number of consecutive HHHL/LLLH periods, whereas GBP/JPY has the lowest. 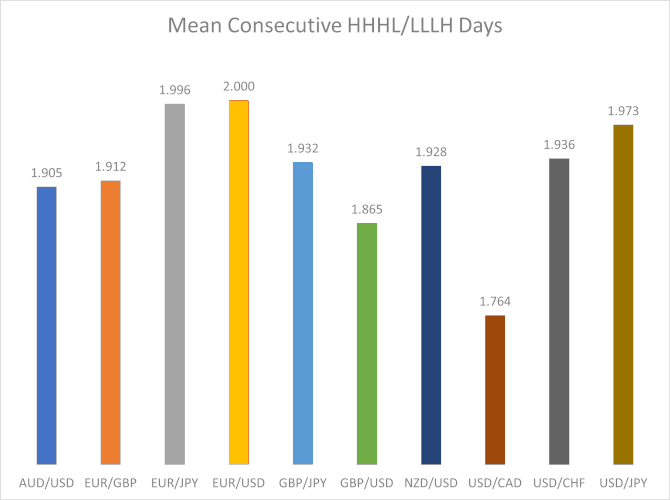 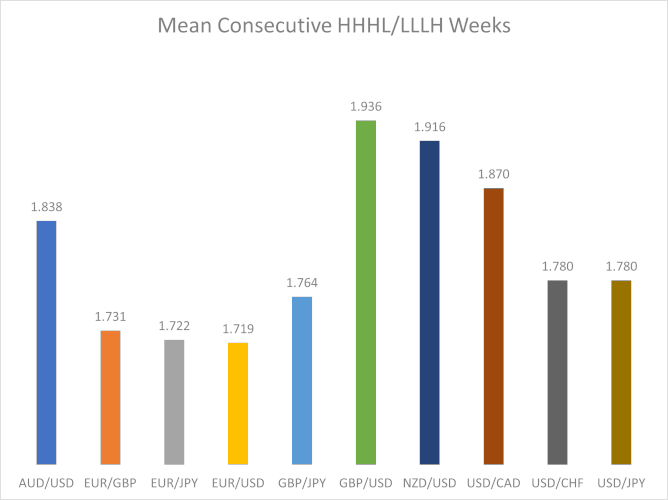 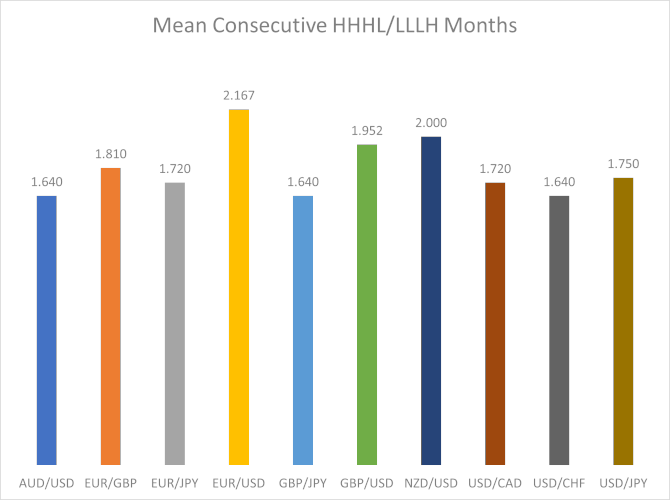 A blunter way to measure trends is to record the average number of consecutive bullish or bearish candles. It ignores the Higher High + High Low and Lower Low + Lower High condition outlined in the previous analysis but still captures useful information about the currency pair's trendedness. The following table contains the mean values of consecutive bullish/bearish candles for each currency pair on the daily, weekly, and monthly timeframes.

The main leaders on the daily timeframe are EUR/JPY and GBP/USD. The weekly timeframe favors GBP/JPY and NZD/USD. On the monthly charts, EUR/GBP is well ahead of the rest of the crowd. These results don't stack well with the ones obtained in the analysis by other methods. Yet it hints that average bullish and bearish streaks are quite longer at some currency pairs compared to others. 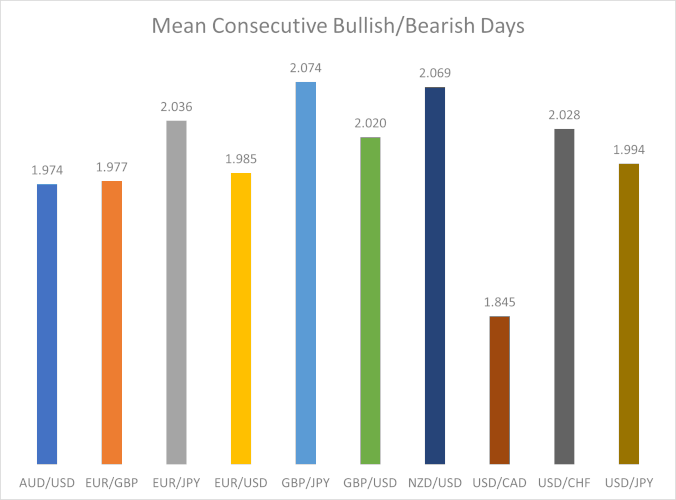 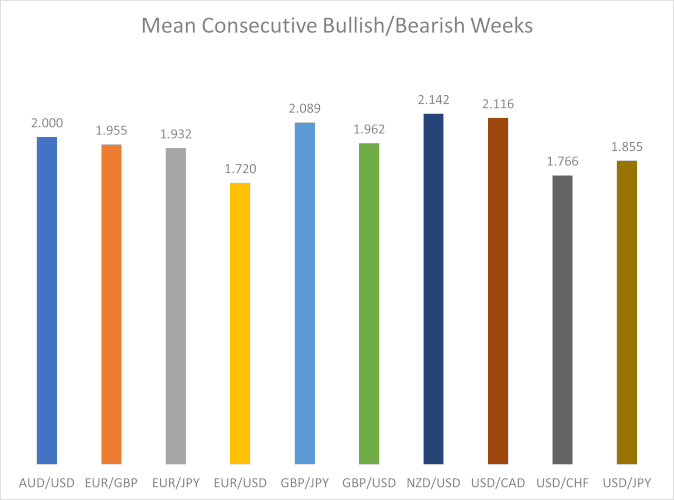 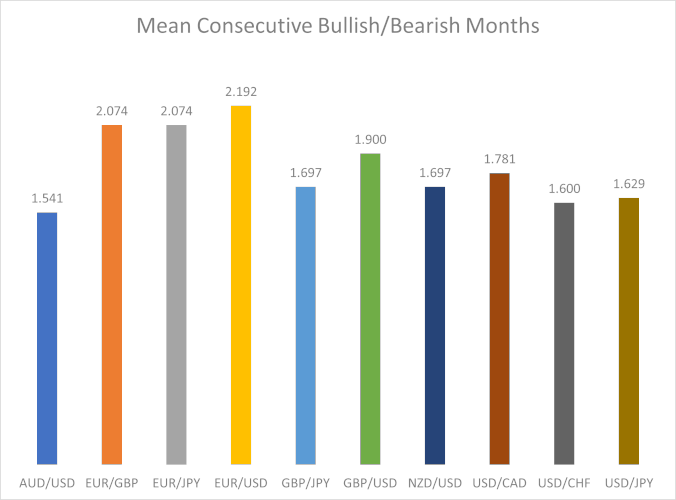 Our research has revealed the following facts based on the studied period of 5 years:

Important note: Past performance is not an indication of future performance. This means that it might be impractical to base actual trading on expectations of the trending behavior to remain the same as they were during the studied period.

If you have some questions about this study of the major currency pairs' trendedness, if you want to suggest some other measures of trendedness to analyze, or if you find some bugs in the TrendStats script, please proceed to our Forex forum.