Traders can use a great variety of types of charts in their trading. Some of them are common, like candlestick charts. Yet some are more exotic and are used only rarely. But that does not mean that such charts are not useful to traders. One of such less popular types of charts, usually used only by professional traders, is the Kagi chart.

What is the Kagi chart?

The Kagi chart is a type of chart that shows the price movement of an asset. It consists of vertical and horizontal lines connected under a 90-degree angle. They can be either thick or thin. Sometimes, a trader can choose to color the thick lines green and the thin lines red. The Y-axis shows the price value. The Kagi chart does not show a consistent time scale. Instead, the X-axis shows key moments when price reversal happened.

The Kagi chart was created in the 1870s in Japan. Initially, it was used by rice traders to gauge supply and demand. The word "kagi" in Japanese is used for an L-shaped key. Indeed, sometimes the Kagi chart is called the Key chart. The name reflects the L-shaped lines of the chart.

Components of the Kagi chart

The Kagi chart consists of the following components: 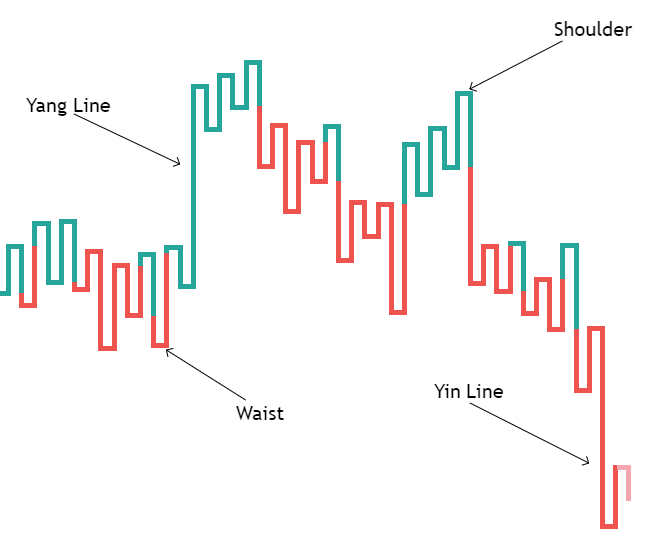 Construction of the Kagi chart

How the reversal amount is determined?

There are three methods to determine the reversal amount:

How to trade the Kagi chart?

There are many ways to filter out the noise from the markets. One of them is to plot a trendline and buy when a waist is created above it or sell when a shoulder is created under it. Another one is to wait until the price falls below the three previous waists or rises above the three previous shoulders to confirm a new trend.

The main advantage of the Kagi chart is considered to be the fact that it is independent of time. This allows it to filter out the market noise and make it easier to spot trends.

The disadvantage of the Kagi chart is the necessity to find a proper reversal value. If a trader sets it too low the chart becomes too choppy, creating too much noise, making it harder to spot trends, and basically erasing the advantages of the Kagi chart. If a trader sets the value too high the chart will create too few trading signals, resulting in missing potentially profitable trade opportunities. The latter means that the Kagi chart is not as useful for less actively traded assets.

How is the Kagi charts different from candlestick charts?

How is the Kagi chart different from other time-independent charts?

Being a time-independent chart, the Kagi chart somewhat resembles the point-and-figure (P&F) as well as the Renko charts. However, the Kagi chart is considered to be a better tool in spotting trends due to the way those charts are built. To better understand why, we should look at how the charts look and how they are constructed.

The P&F chart consists of Xs and Os. An X is created when the price rise more than the specific amount above the previous high, while a Y is plotted when the price falls more than the predetermined amount below the previous low. While it makes it easy to understand and plot the chart, such an approach means that it usually takes a relatively long time for a new X or Y to appear. This makes it not that useful for fast-trading intraday markets, like the Forex.

Let's look, for example, at the chart of EUR/USD. A rally had started at the end of May 2020, and those traders who entered long positions early could have profited greatly from it. Yet, if we look at the daily P&F chart of the currency pair, it would take too long to identify the trend, and traders might have lost a significant chunk of profit waiting for confirmation. 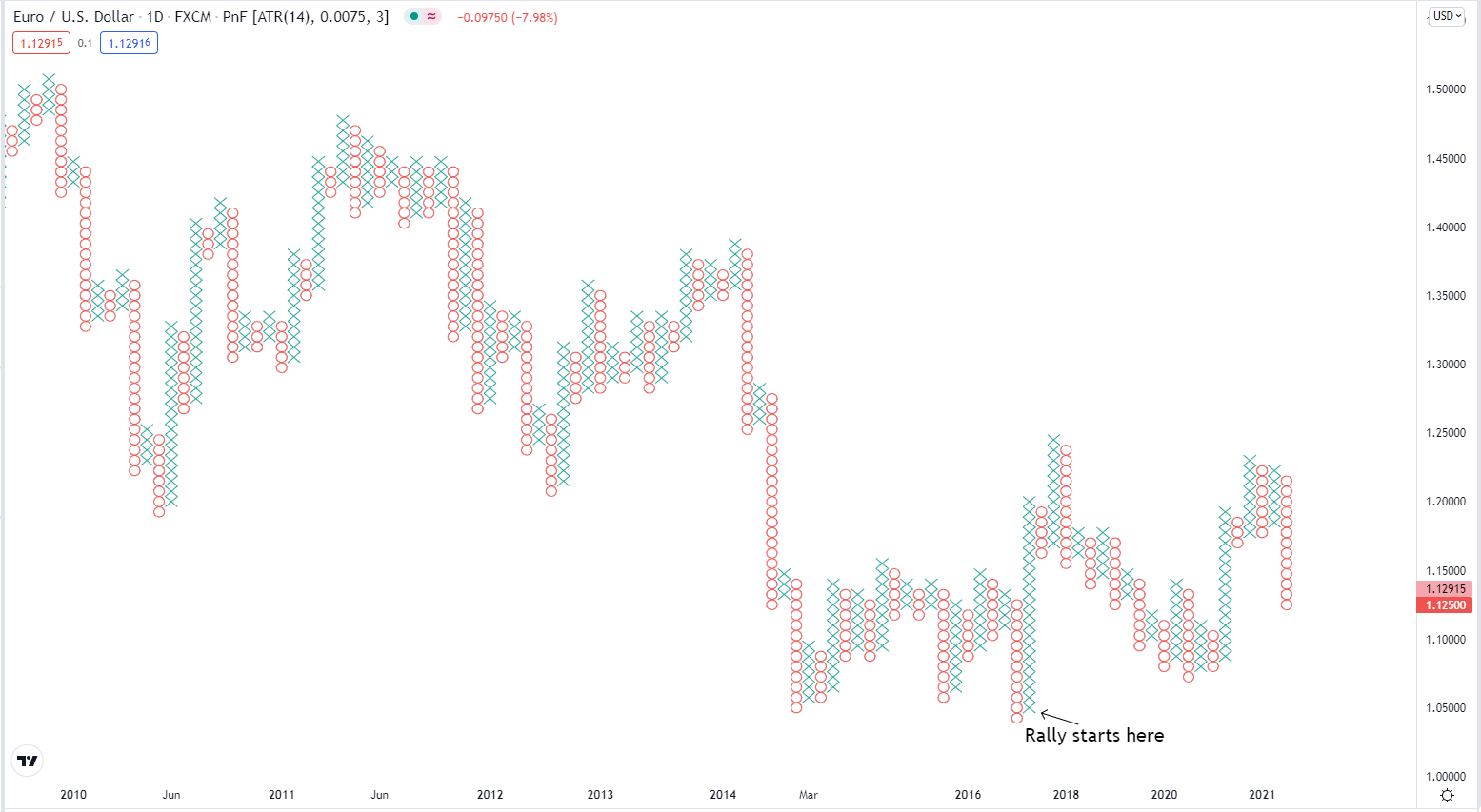 Using a smaller timescale alleviates the problem a bit. Here is the same chart on the 4-hour timescale. 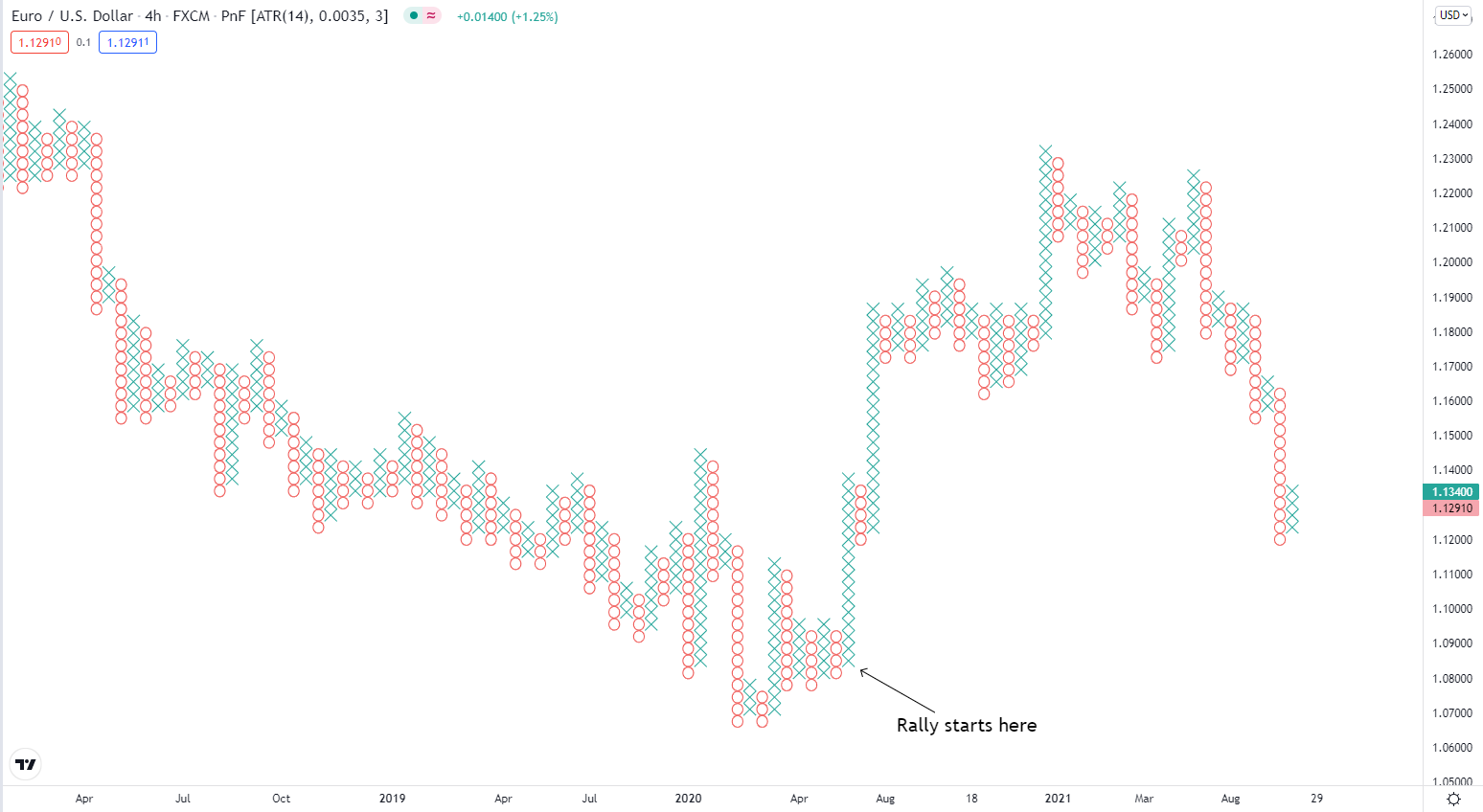 With all Xs and Os, the chart still looks just too crowded visually, making it harder to see less prominent trends.

But what about Renko charts? The Renko chart consists of boxes (called bricks). A new brick appears only when the price moves at least by the set minimum amount. Additionally, a new brick can appear only if the closing price rises above the top of the previous brick or falls below the bottom by at least the specified amount. With new bricks appearing more often than Xs and Ys on the P&F chart and with each new brick being placed to the side from the previous one, it makes it far easier to catch a trend on the Renko chart than on the P&F chart. Let's look at the Renko chart of EUR/USD. 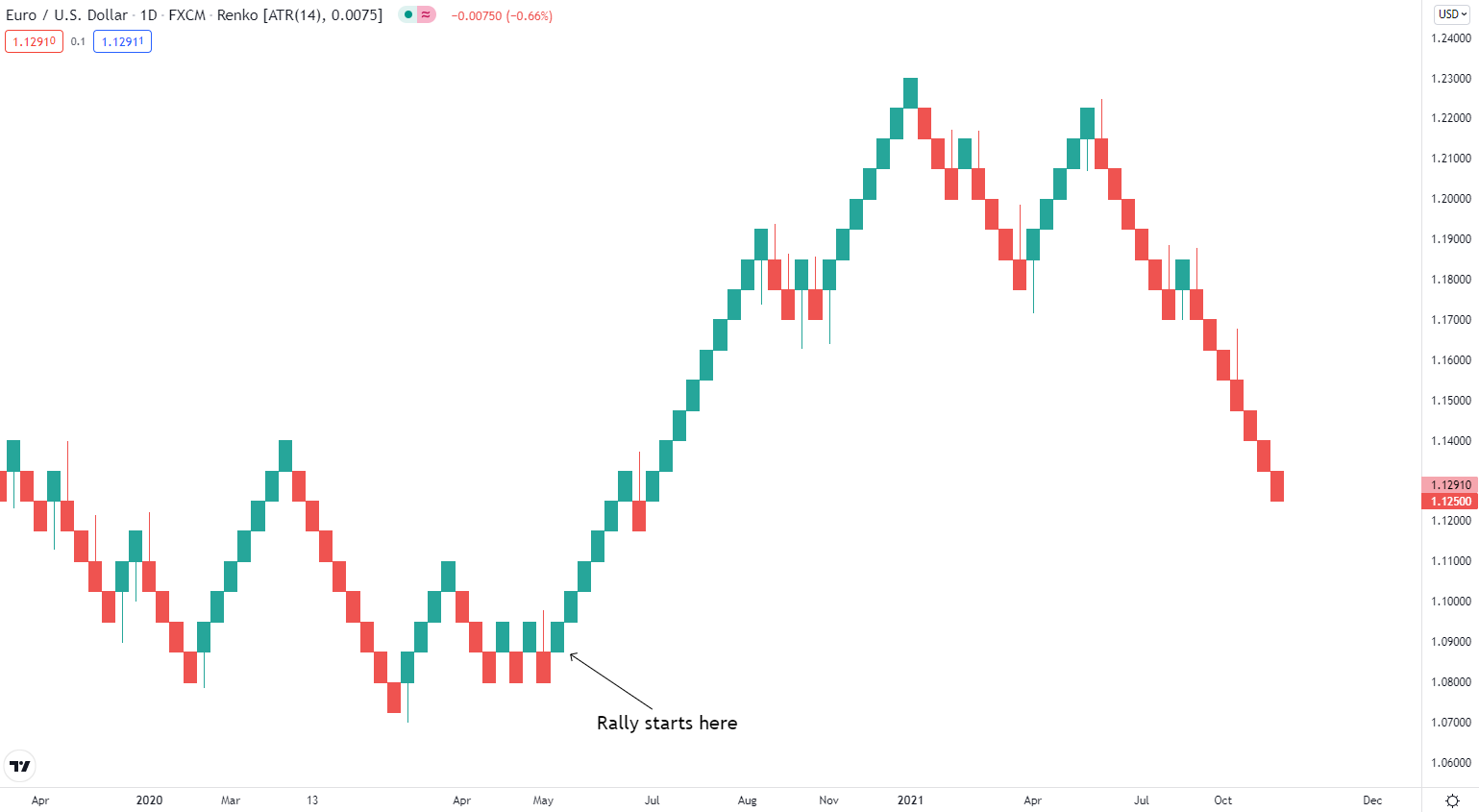 However, as a new brick is created every time the relevant price action happens, it reduces the advantage of filtering out market noise and makes the Renko chart look closer to the candlestick chart than other time-independent charts. Additionally, due to the nature of how the Renko chart is built, it cannot quickly react to trend reversals. As no two bricks can be placed beside each other, the price has to move at least by two bricks before it is allowed to change the direction.

And to conclude the comparison, let's look at the Kagi chart of EUR/USD. 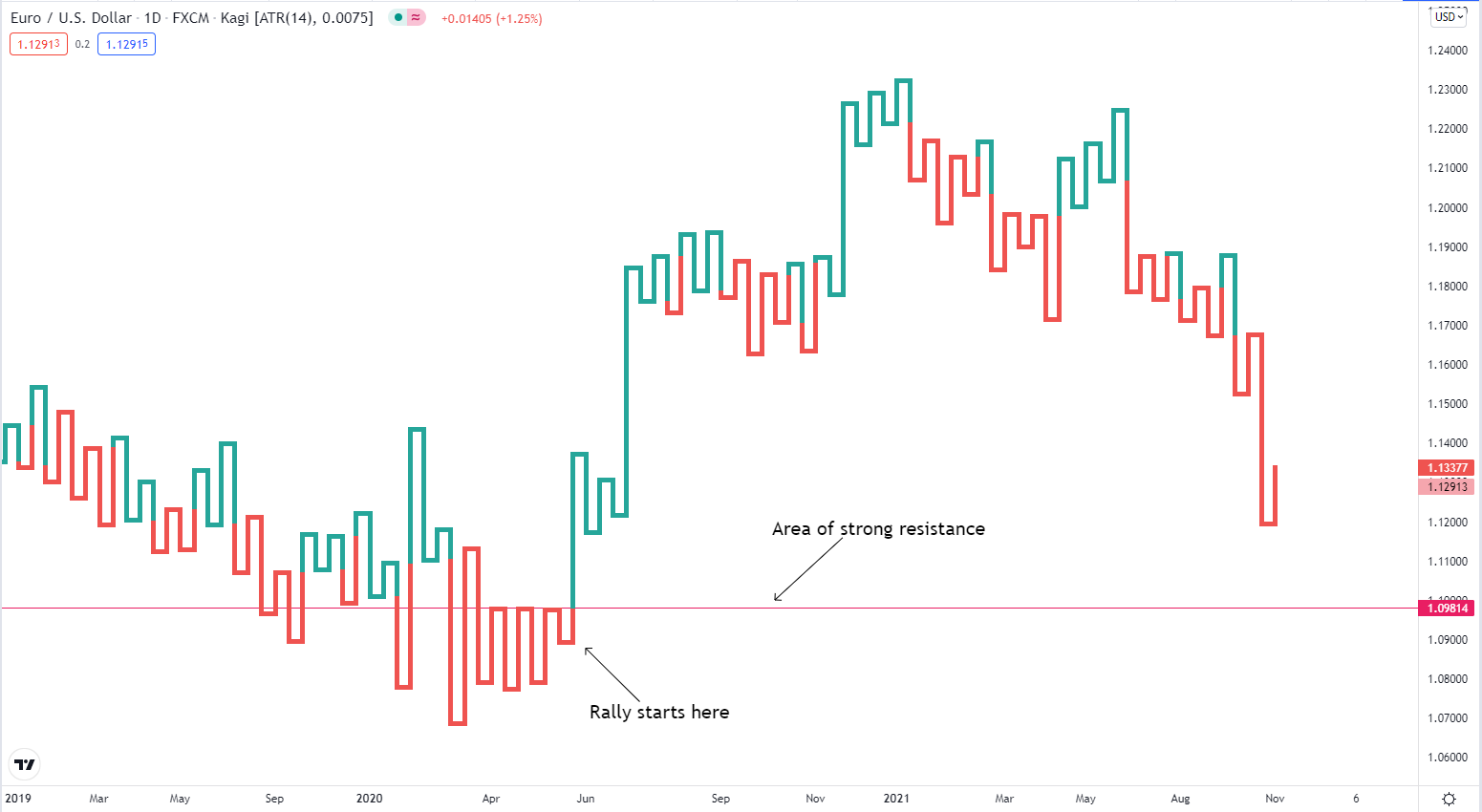 Not only it is quite easy to see the uptrend, but traders could also have jumped in as soon as the price broke above the strong resistance level, tested three times before, and the chart sent a bullish signal by turning the Yin line into a Yang line.

Can the Kagi chart be used in Forex?

The method for building the Kagi chart does not discern between different assets. That means nothing prevents traders from using Kagi charts for trading the Forex pairs.

It is important to remember, though, that some currency pairs are more actively traded than others. That means it can be useful to use different reversal values for different currency pairs. Some professional traders advise using an ATR-based reversal value to account for variations in volatility. Others advise against this as such an approach removes precise control of the reversal value from the hands of the trader on top of changing the look of the chart in the past.

Unfortunately, the Kagi being a less popular chart means not every platform supports it. Here is the list of popular platforms that allow using the Kagi chart.

The MetaTrader platform does not support the Kagi chart out of the box. But it can be downloaded for free from the official code base as a separate indicator.

Here is one example of such an indicator for the MetaTrader 4 platform called KAGI_1: 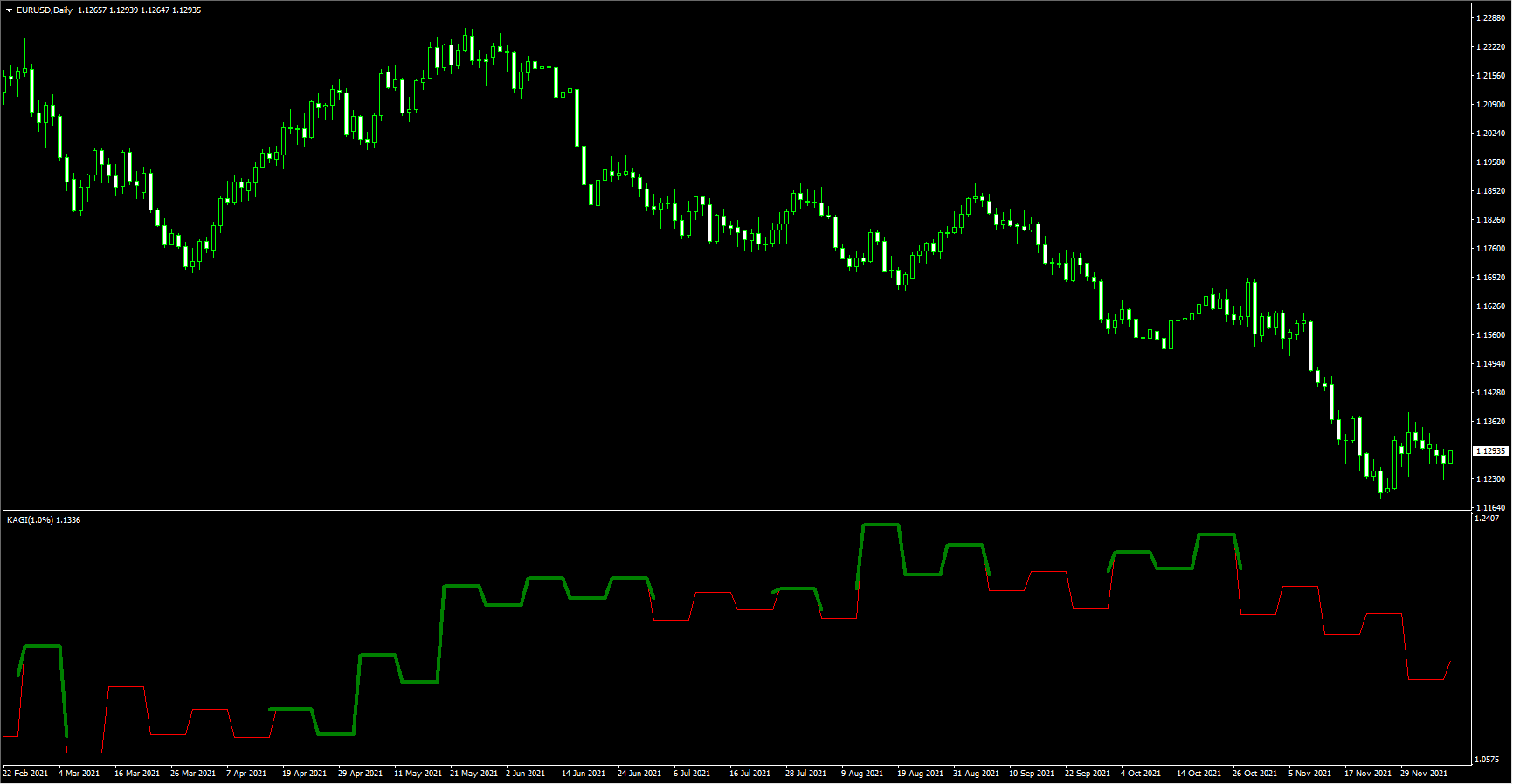 And here is an example of a Kagi chart indicator for the MetaTrader 5 platform called kagi-1: 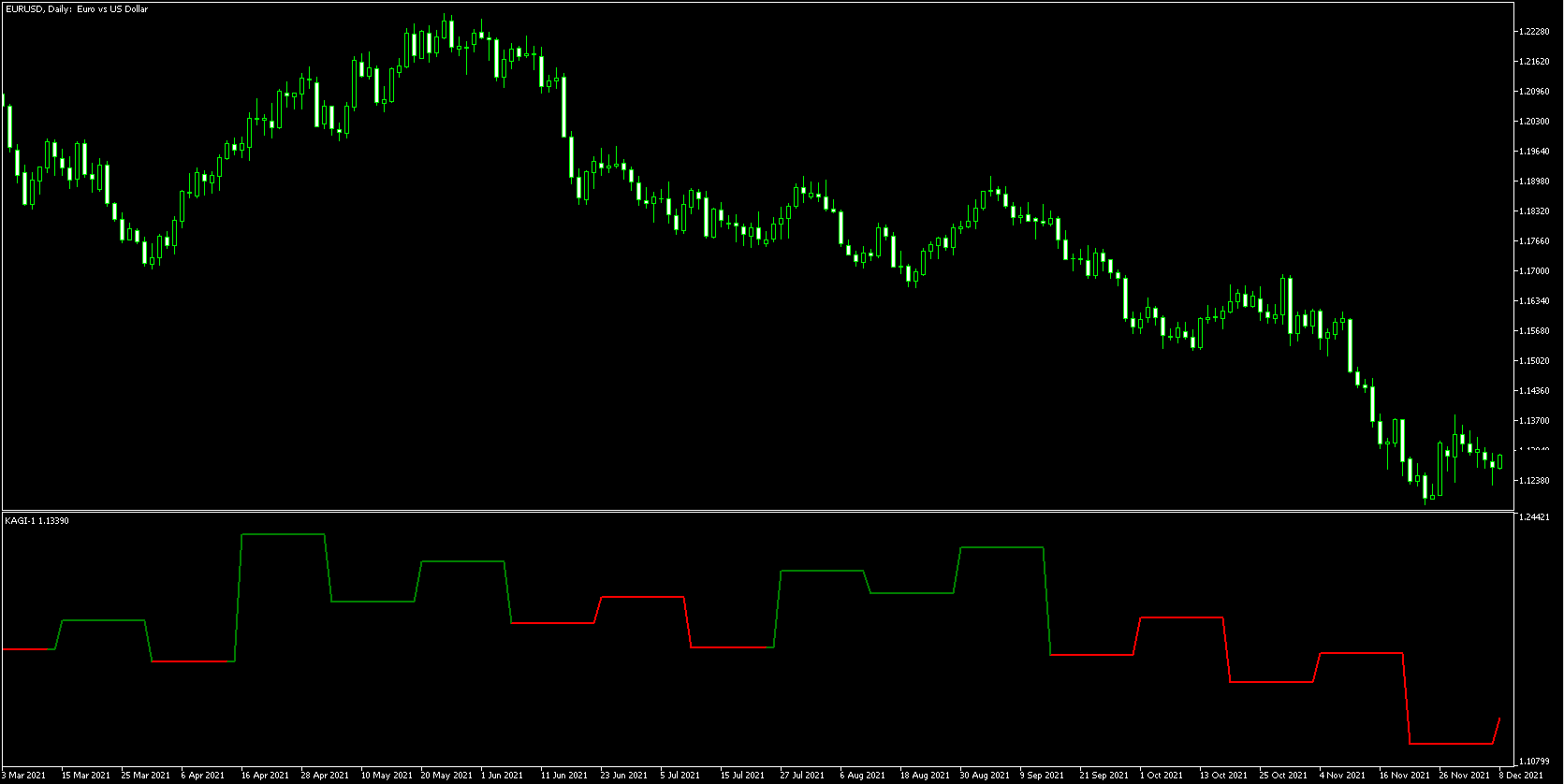 While the indicators allow you to see Kagi charts on the popular MetaTrader platforms, the charts do not look great, and MetaTrader is clearly not the best way to use Kagi charts. It is better to use platforms that have the Kagi chart by default, like the ones listed below.

NinjaTrader comes with the Kagi chart out of the box. To use it a trader should choose the Kagi Line option in the Chart Style of the Data Series menu item (Data Series->Chart Style->Kagi Line). 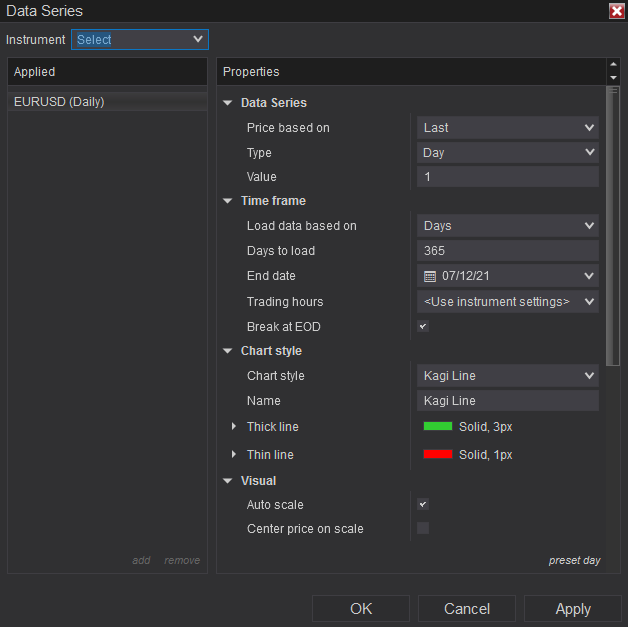 Here is an example of how the Kagi chart looks in the NinjaTrader platform: 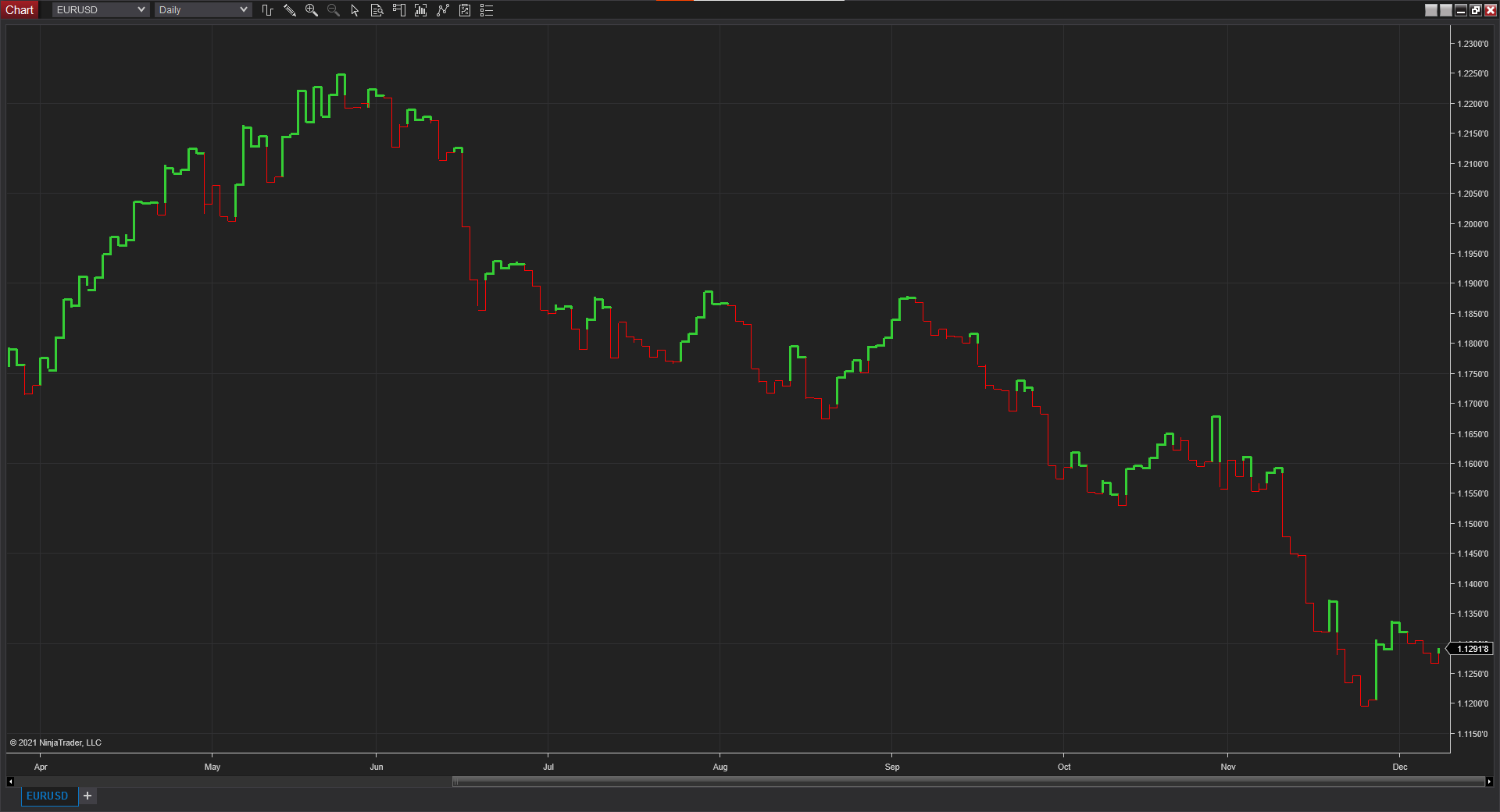 TradingView is perhaps the easiest way to try Kagi charts as it has this type of chart built in and does not require a download. You can simply choose Kagi when choosing the chart type. Unfortunately, the Kagi chart is available for free only on daily or longer timeframes. Intraday timeframes are available only to paying customers. 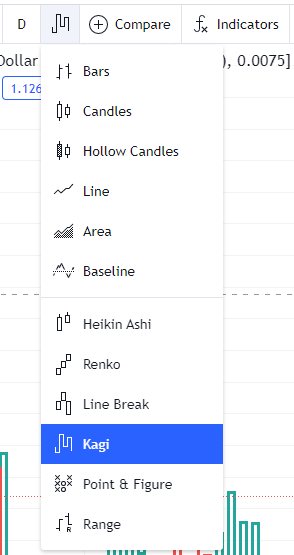 Here is an example of how the Kagi chart looks on the TradingView platform: 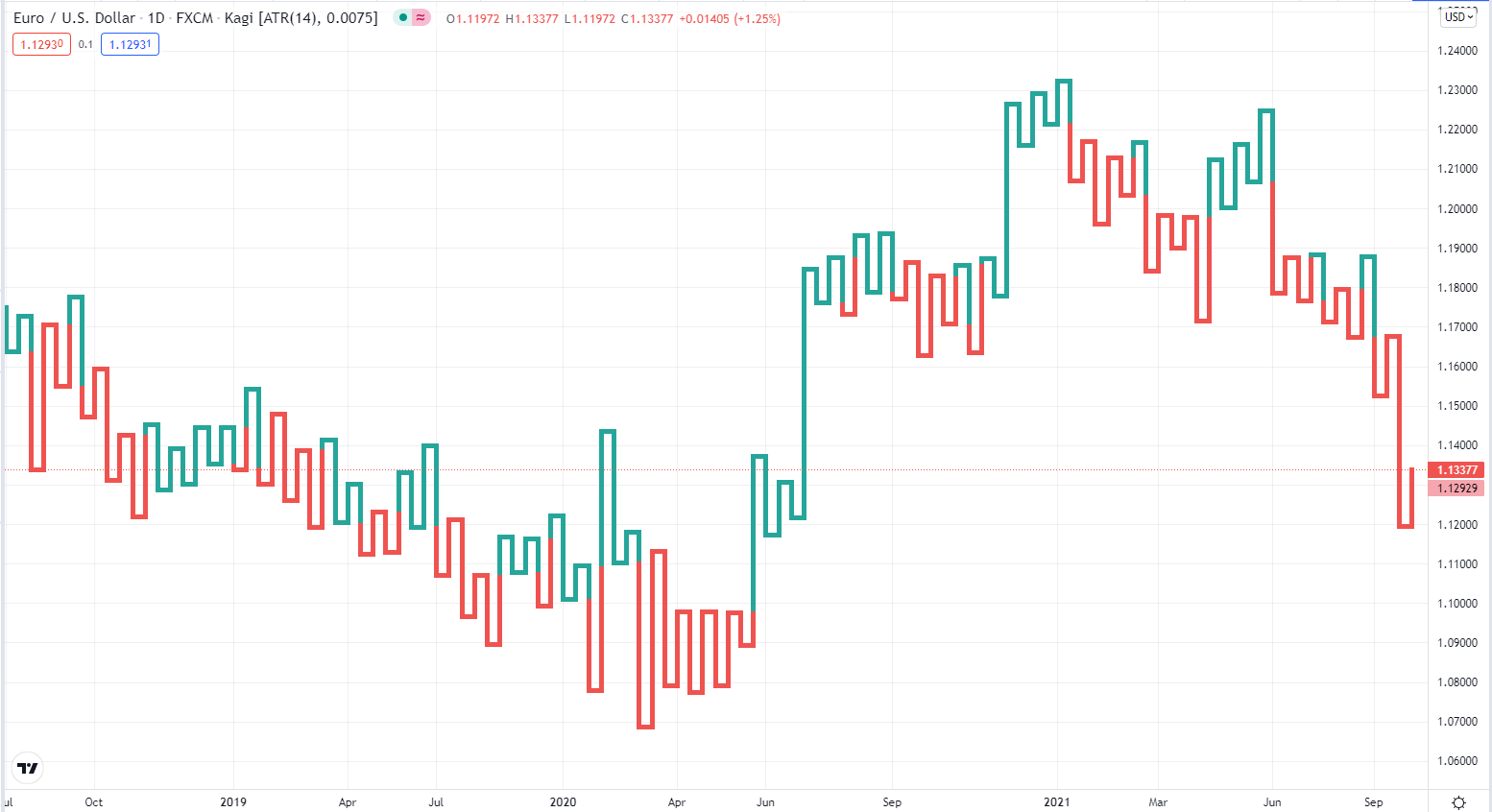 If you want to share your opinion, observations, conclusions, or simply to ask questions regarding the use of the Kagi chart in Forex, feel free to join a discussion in our forum.