What Is Repainting Indicator in Forex?

What are repainting indicators?

Repainting means that the indicator is updating its display, changing what has already been on the chart. There are two major types of repainting:

Nearly all technical indicators constantly update the current candle value with each new tick. It is a totally normal behavior. The Close price of the current candle changes for as long as the candle is forming, so if the indicator is based on Close prices (which is often a default applied price type), the indicator's value at the current bar will change too. This isn't bad and many traders wouldn't even call this repainting. To mitigate the results of such repainting, traders should wait for the candle to close and a new one to open before taking any consideration of the indicator's value. However, if you set the indicator price type to Open, this ceases to be a problem at all. For example, see the latest candle repainting with these two classic RSI indicators — the red one is applied to Open, so its value never changes after it has been calculated for the given candle; the blue one is applied to Close and is updating with each new tick:

Some indicators are changing their signals on past candles. It means that the indicator's code is looking at the future candles to paint the display for the past bars. Of course, a trader cannot rely on such an indicator in live trading as it won't be seeing future candles when attached to a chart. This is a bad kind of repainting. For example, you can see how a famous repainting indicator Semafor keeps repainting the signals on old candles. If you would have acted on any of them, you would get yourself in trouble:

If you look at the same indicator's output in retrospect, it looks perfectly precise and impeccably timed: 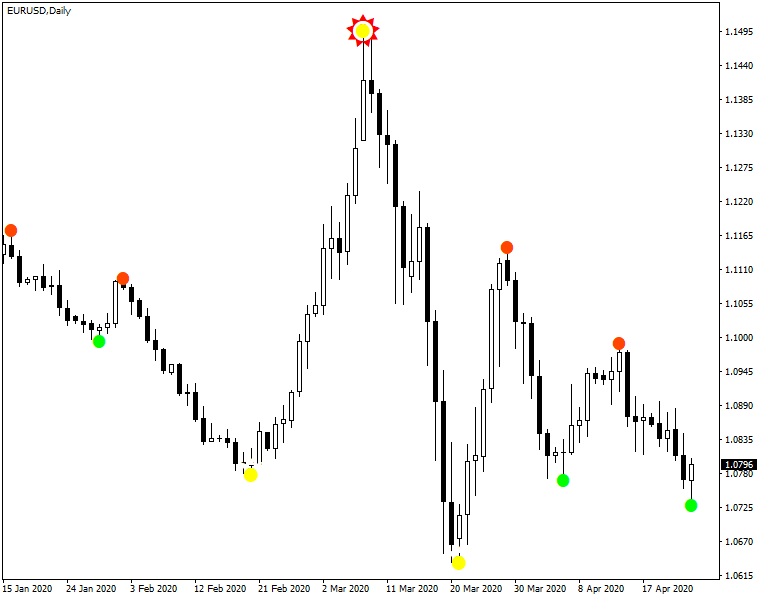 Do all indicators repaint?

Why do indicators repaint?

Repainting of the past candles when added intentionally by the indicator developer is usually aimed at fooling potential users to make the signals appear more accurate or timely. What appears as perfect signals on a historical chart will actually turn out to be nowhere near as good in live trading. The historical chart was showing the indicator with all its signals already repainted using the chart data that hadn't been available at the time of those signals.

Sometimes, an indicator can be made repainting intentionally but without any malicious intent. This can be useful to make further chart analysis easier or to highlight some peculiarities of the price action. In any case, the developer should clearly disclose the repainting nature of the indicator. Otherwise, it is generally considered cheating or even scamming by the community of Forex traders.

Occasionally, an indicator can be made repainting completely unintentionally. It is possible to code an indicator in such a way that it "looks" at the next bar (to the right) instead of previous bars to calculate its signal value. This error can be committed by a beginner developer without giving it a second thought. That is why it is important for indicator coders to test and backtest their work before releasing it to the public to avoid being accused in repainting scam.

Lastly, indicators that repaint the current bar based on Close/High/Low price (like the blue RSI in the example above) are coded that way intentionally, and the last candle repainting is a normal behavior for them. If you use such indicator in trading, you should take a cue only from the finished candles.

An often-overlooked kind of repainting issue is the one that occurs in multi-timeframe (MTF) indicators. An MTF indicator is an indicator that uses data from other timeframes (normally, higher ones). For example, a simple multi-timeframe moving average indicator could be displaying an SMA value from a daily timeframe on your H1 chart.

Some MTF indicators can look very appealing thanks in large to their repainting effect. When an MTF indicator is attached to a chart of a lower timeframe, its historical values are displayed so as if the Open/High/Low/Close values of the higher timeframe candle are known at the first candle of the lower timeframe. 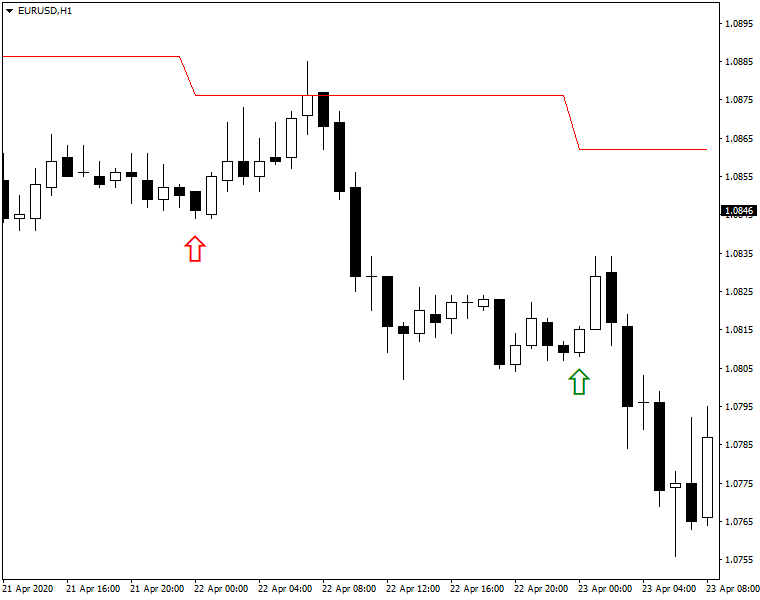 When trading with multi-timeframe indicators, you must always remember to keep an eye for such a repainting and never judge the efficiency of such indicators by their appearance on historical charts.

How to know if the indicator is repainting?

The easiest way to check and verify in MT4 or MT5 platforms is the Strategy Tester. You can launch a visual backtest of any indicator and see if its signals change post factum. Here is how to do it: 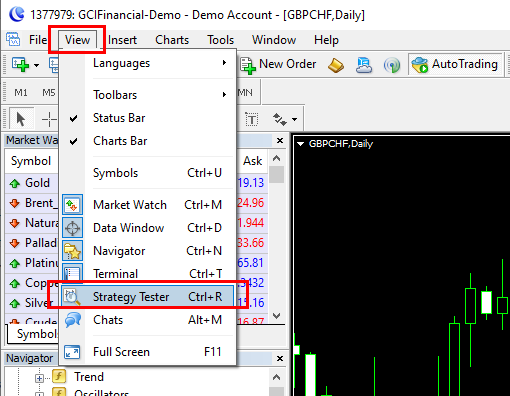 You can also watch the entire process in detail in this video:

As you can see, it isn't hard to tell if the indicator is repainting or not.

One potential problem with some particularly malicious indicator sellers could be that they detect whether indicator is being tested in Strategy Tester and skip repainting if so; this would conceal the repainting nature of that indicator, but it would also reveal how inferior its signals are (as the repainting is mostly done to make signals look more accurate than they are).

How to tell if an indicator is repainting if I cannot backtest it?

Is an indicator that repaints useless?

Not all repainting indicators are bad. As you saw above, indicators that repaint the latest candle aren't bad at all and provide great information to technical analysts regardless of this trait. Indicators that repaint their values on the already completed candles can also be quite useful. To not use them at all because they repaint isn't always a smart choice. Of course, you must know how they function and acknowledge the fact that they repaint.

One of the most popular repainting indicators every trader encounters after installing a MetaTrader platform is ZigZag. It is an awesome indicator but it repaints. To use it properly, traders have to be aware that it repaints and utilize its lines and nodes solely for building support and resistance zones or trend lines.

Fractals (or Bill Williams' Fractals) is another fascinating repainting indicator that is present in MT4 and MT5 platforms by default. Fractals are drawn using simple rules: fractal up arrow requires a high surrounded by two lower highs from each side; fractal down arrow requires a low surrounded by two higher lows from each side. As you can see, it needs five candles in total to display an arrow, and two of the candles should be in the future relative to the current one. This results in the repainting behavior. A trader should wait for two next candles to finish forming before considering the output of the Fractals indicator.

Indicators such as ZigZag and Fractals are not meant to deceive traders. They are effective in identification of support and resistance levels.

Semafor indicator had already been mentioned above when we were first talking about indicators repainting the signals of the previous candles. Still, Semafor indicator is a worthy custom indicator available for many trading platforms. Despite the fact that it looks too good to be true, lots of people rely on it for analysis of the past price action and for marking down the important price levels on the chart. Numerous threads on popular FX forums confirm that it has no lack of fans to this day. The below chart shows an example markup of short-term and long-term support and resistance levels using the Semafor indicator: 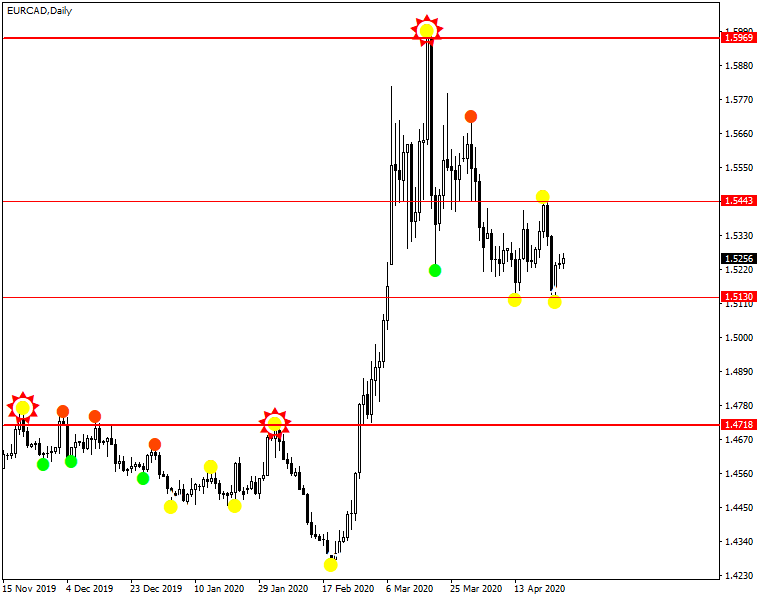 Center of Gravity is displayed above in the tutorial on detecting repainting with Strategy Tester. It is a variant of linear regression channels and is extremely useful in two tasks - detecting trend direction and measuring the volatility of the past N candles. Of course, it is crucial to always keep in mind the repainting nature of the indicator and not to use it for direct generation of entry and exit signals for your trades. The chart example below shows a clear trend direction (up), a period of low relative volatility (between the two blue lines), a period of excess volatility (between the second blue line and the green line), and the current period of "normal" volatility. 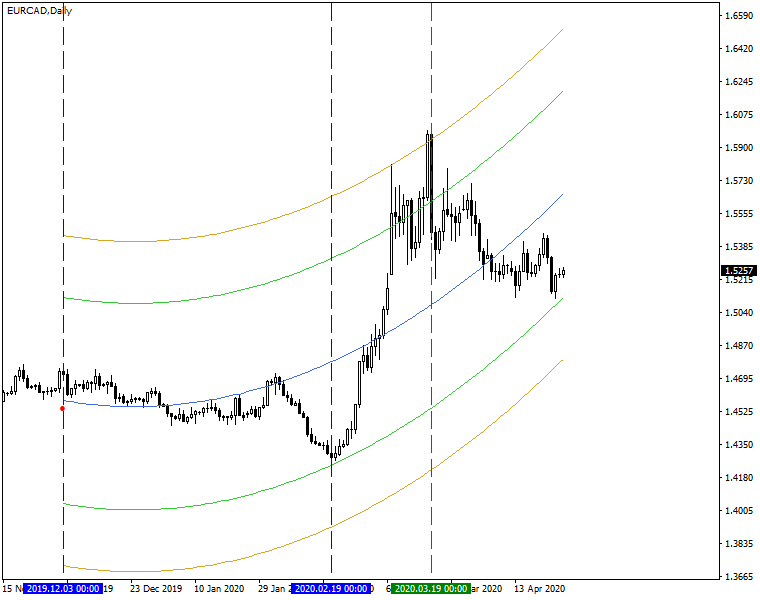 How to fix indicator repainting?

If you are wondering if there is any way to edit an indicator so it doesn't repaint, then you have some options available.

Repainting indicators that take advantage of looking into the future candles can be fixed by removing the code that does so. Unfortunately, the indicator might become completely unusable after that as it draws to many false signals, which previously had been hidden by the repainting process.

In both cases, you should either know some coding to try fixing the repainting or hire a professional MQL developer to fix it. If you don't have access to the source code of the indicator (.mq4 or .mq5 file) and only have compiled indicator (.ex4 or .ex5 file), it will be impossible to fix the repainting.

MetaTrader is arguably the most popular trading platform in online retail Forex trading. However, in other platforms, repainting indicators can also pose a problem when an unsuspecting buyer can be scammed by fraud sellers. Fortunately, as you have seen above, not all repainting indicators are useless - the trick is to know whether the indicator repaints and to use it accordingly.

cTrader isn't free from repainting indicators. cAlgo indicators can suffer from the same types of repainting as MQL indicators. Indicators based on Close price repaint the latest candle's value. Malicious, poorly coded, or special purpose indicators can repaint the values on past candles. The problem is that it isn't possible to run indicator backtests in cTrader, so, unlike in MetaTrader, there is no fast and easy way to check if an indicator repaints. The best way is to observe how the indicator functions on some very short timeframe or, if you understand C# code, analyze the source code of the indicator (when it is available).

Here is a time-lapse of ZigZag indicator repainting in cTrader on a tick chart:

NinjaTrader is not immune to repainting indicators either. If you use this trading platform, you have to be aware of the repainting nature of the indicators you use. To check whether an indicator is a repainting or non-repainting one, you can use Market Replay facility of NinjaTrader. It effectively allows you to backtest any indicator on a chart of your choice.

Here is a Market Replay demonstration of the Fractals indicator repainting in NinjaTrader - note that signals appear only two candles in the future:

TradingView is a very popular charting platform among all kinds of financial traders (including crypto and Forex). The main repainting indicator problem - when indicator values on old candles are updated with the data from future candles apply to TradingView the same as it does to other platforms. You can test to check if the indicator is repainting either by running it on a 1-second chart as done with Fractals in the animation below, or you can launch the Replay feature to run a fast-forward replay of any amount of bars from any timeframe and see how the indicator behaves.

Unfortunately, this cannot be helped if you are dealing with a closed-source script. It could be a repainting one and you wouldn't be able to verify or fix that via the source code.

When taking trading signals for entries and exits from an indicator, make sure it is a non-repainting one. Trading using signals from repainting indicators will cause only loss and frustration. Always check if the indicator is repainting or non-repainting via Strategy Tester before buying one. Demand full disclosure from its developer. Don't get yourself lured by nice looking repainted charts with seemingly perfect historical signals that catch every low and high.