The value of a country’s currency, relative to another, is affected by a multitude of factors such as the economic growth, debt level, balance of trade, inflation, and interest rates. Interpretation of several of these important economic data is simple and straight forward. However, data pertaining to inflation is not easy to decipher. Both high and low inflation are not good for a country’s economy. In this regard, the energy prices play an important role in causing an increase or decrease in inflation. Thus, from the perspective of a trader, a clear idea of the relationship between the energy prices, inflation, and currency rates is a must to make wise trading decisions.

Relationship between energy prices and inflation

Before we discuss about the relationship between energy prices and inflation, it is better to have a clear idea about inflation.  Inflation, as everybody knows, measures the rate at which the prices are rising. There are two kinds of inflation. The first one is cost push inflation. The other one is demand pull inflation. If the price of a product increases due to an increase in the cost of raw materials, then it is referred to as cost push inflation. On the other hand, if the price increases due to a rise in the aggregate demand for the product, then it is defined as demand pull inflation.

Based on our discussion earlier on, we can say that low inflation rate normally equates to low prices. It means that industries realize lower cost for their products. Ultimately, it affects the wages. There won’t be any meaningful increase in wages when the inflation is too low. That is the reason for the Central Banks to loath low inflation or deflation (negative inflation) scenario. The low inflation scenario, which as of 2016 exists in the USA, Europe, Japan, Australia, New Zealand, and several other countries, is causing fear among the economists squarely for this reason. Ultimately, a prolonged low inflation scenario leads to an increase in the unemployment rate.

On the other hand, if the inflation is allowed to rise freely, the situation will be quickly out of control. It will again lead to recession and unemployment. In spring of 1980, the inflation in the US touched a high of 14%. This was soon followed by a recession. In order to avoid such a situation, Central Banks have to balance growth and inflation continually. Most economists agree that an annual inflation rate of 2% to 3% is ideal. It will continue to spur growth and also will create a meaningful increase in wages. 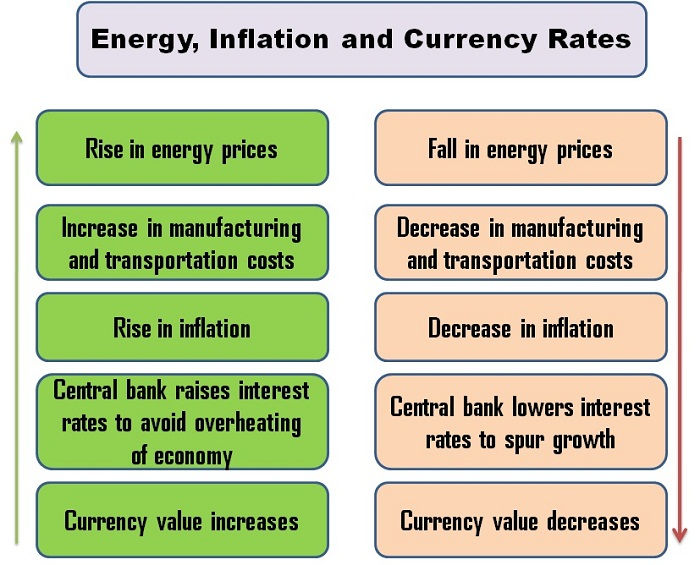 A rise in the energy price leads to an increase in the inflation. To keep the inflation under control, a Central Bank will attempt to decrease the money supply in the market. This is done indirectly through an interest rate hike. A rise in the interest rate in a geographically stable and economically strong country will naturally attract more investments. When more and more investors flock to invest in a country, its currency value will increase relative to others.

On the other hand, low inflation would force a Central Bank to increase the money supply to trigger growth. This is generally done through an interest rate cut. When interest rates go down, the attraction towards the country will decline. Investors would start leaving the country in search of better green pastures. When they take back their investments, the value of the currency would start declining relative to others.

The theory would work perfectly as long as the country has a stable government and a growing economy. If the economy is deteriorating due to internal or external issues, the inverse would happen. There would be hyper inflation (inflation rising without control) leading to large scale unemployment and devaluation of the currency. Thus, inflation data is usually left for the trader to decipher and never categorized as better or worse.

A wannabe professional trader should compulsorily have a good knowledge about the relationship between the energy prices, inflation, and currency rates. Only then a trader would be able to capitalize on large price moves that usually happen when there is considerable rise or fall in the energy prices. Furthermore, the trader will also be able to suitably position himself in the market to the measures (interest rate hike or cut) taken by the Central Bank to increase or decrease inflation.