Until the first-half of 1971, the international monetary system was regulated by the Bretton Woods System, which is more or less a modified gold standard system that existed in the early 1940s. Under the system, the major currencies were tied to the US dollar, which was in turn pegged to the gold reserves at Fort Knox. The inherent loop holes in the system and the transition of the Europe towards the free movement of capital ultimately resulted in the collapse of the system.

In August 1971, the US President Richard Nixon unilaterally announced the discontinuation of the Bretton Woods system, as the country’s gold reserves dipped to one-third of the dollar held by other countries. The main reason for discontinuation was that it looked like France would ask for the delivery of the yellow metal in return for the US dollars. Finally, when the US dollar started floating, it paved way for other currencies to pursue a similar path.

Before the euro came into existence on January 1st, 1999, the US dollar index was made up of 10 currencies including the Deutsche mark of Germany. The arrival of the eurozone resulted in the modification or rebalancing of the currencies that makes up the DXY.  Since then no changes have been made, even though the currencies are no longer the most traded with the US dollar. 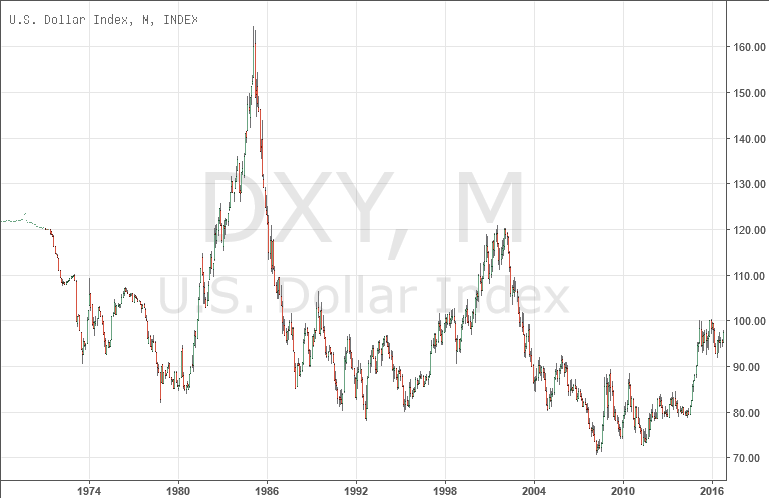 Math behind the US dollar index

The formula for the calculation of the US dollar Index is as follows:

Trading the US dollar index

The quotes are updated once every 15 seconds using multiple Forex data feeds. The midpoint of the top bid/ask price is used for the calculation of the US dollar index and is passed on to different data vendors. Some of the data vendors use their own symbol. For example, Bloomberg uses the symbol DXY (commonly referred to as Dixie). Trading in the contract starts at 18:00 EST on Sunday and ends on 17:00 EST Monday. The market re-opens again at 8:00 EST and closes at 17:00 EST on Tuesday through Friday. Similar to other exchanges, the traders can place orders during the pre-open period (30 minutes before the trading/execution of orders begin). The derivative contracts enable an investor to hedge his portfolio against the volatility risk of the US dollar.  The US dollar index ICE contract is the only USD futures contract which is publicly traded in a regulated exchange and offers a transparent price discovery mechanism. Based on the personal capability, variations of the US dollar index are privately traded by the hedge funds and high net worth investors with the investment banks.

The size of the US dollar index futures contract is $1,000 times the index value. For example, if the US dollar index is trading at 96.550, then the size of the contract is $96,550. The tick size is 0.005 ($5 worth). The contracts have quarterly expiration cycle - March, June, September, and December. Daily settlement is based on the volume-weighted average price of all the transactions executed during the closing period (14:59–15:00 EST). Even though the tick size is 0.005, the settlement price is expressed in 0.001 increments.

In general, the futures contract of the US dollar index is stated to be offered by the New York Board of Trade (NYBOT), which is a subsidiary of the ICE. The DXY is also traded as ETFs and mutual fund units through various exchanges.

In order to make the index relevant to the current economic situation, in 1998, the Federal Reserve created an alternative to the US dollar index. Firstly, there was a need to include the currencies of countries such as Brazil, China, and Mexico, which were gaining prominence in the international trade with the USA. Secondly, the arrival of the euro made it a necessity for the creation of an alternative to the existing US dollar index. The newly created index was referred by the name trade-weighted US dollar index or Broad Index. 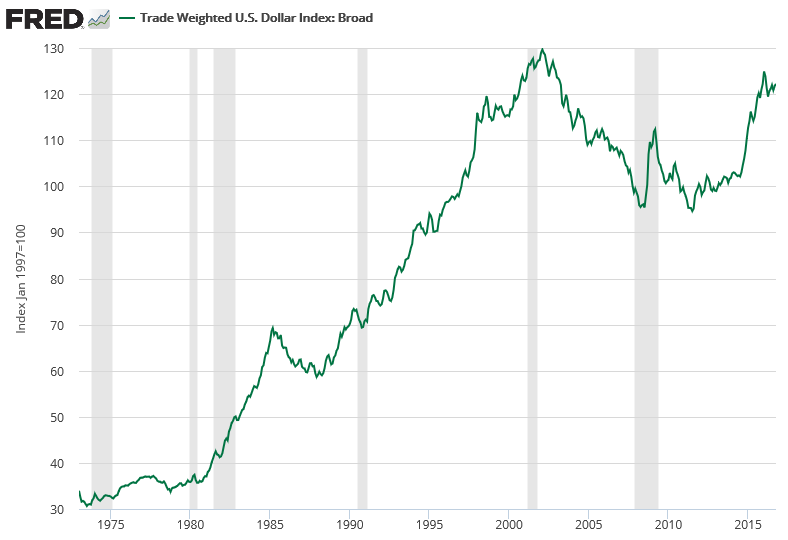 As mentioned earlier, the index was primarily created to assess the strength of the US dollar in an accurate manner. The weightage of the currencies used in the calculation is based on the volume of imports and exports between the United States and the respective countries. The trade data is used to update the weightage of the currencies once a year. The trade-weighted US dollar index is updated once a week. It is not available for trading. The currencies that were used for the creation of a trade-weighted US dollar index and the corresponding weightage as of October 26, 2015 were as follows:

Math behind the trade-weighted US dollar index

— value of index at time

— value of index at time

— number of currencies in index at time

— US consumer price index at time

— US consumer price index at time

— value of the country

— value of the country

From the currency composition and the corresponding weightage, it can be easily understood that the US dollar index no longer reflects the current situation. The ICE also charges a considerable amount for the real-time and delayed quote feed. 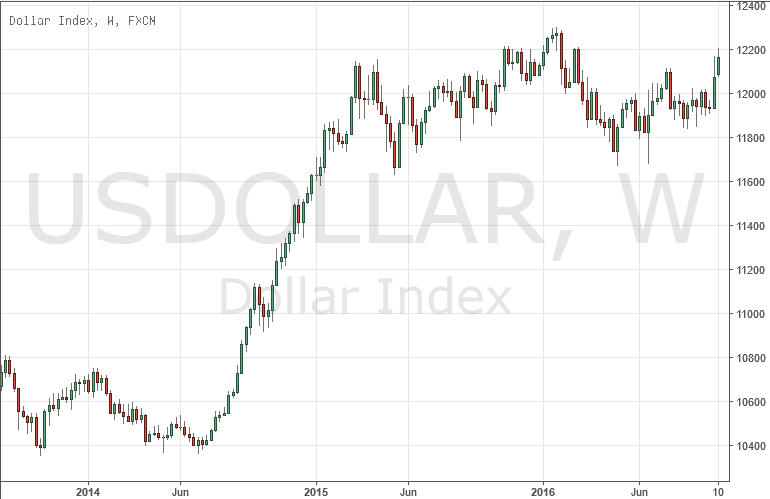 The US dollar index can be used as a quick reference guide to assess the strength of the US dollar against the rival currencies. However, considering the huge investment required, it is arguably suited only for large traders. Still, it is worth to check out the index chart before entering into a trade as it will assist in avoiding wrong entries.