Commitments of Traders report is released by CFTC every Friday and contains the data on long and short futures and options positions throughout US exchanges. Among other things it includes data on the following currency pairs: USD/CAD, USD/CHF, GBP/USD, USD/JPY, EUR/USD, AUD/USD, RUB/USD, MXN/USD, BRL/USD and NZD/USD. It is believed that using the reported data on the number of "smart money" positions taken in a given pair, a Forex trader may skew winning chances in his favor.

The report contains a rather big set of quantitative characteristics based on five classes of traders:

If you want to follow some category of traders, it should definitely be either Dealers or Asset Managers as these two categories consist of the "smartest money" — the sell-side of the futures market. The most simple way would be to buy a currency pair whenever the number of Dealer long contracts rise and short contracts fall. Of course, there are numerous modifications possible based on adding some other categories into the formula or using additional market data for entries or exists.

The backtesting results of more than thirty strategies based on CoT reports have shown that most of such strategies (following Dealer trades) offer a positive edge in long-term perspective. The most consistent strategy is presented below.

Buy and Sell with Dealers/Intermediary Traders

Surprisingly, the most straight-forward interpretation of the Commitments of Traders report yields a profitable output on all of checked major currency pairs except AUD/USD, albeit with quite significant drawdowns over the course of nearly 8 years.

The rules of the this strategy are pretty simple:

After the first entry is executed, the strategy remains in the market during all times.

The execution of this strategy is also uncomplicated. Every CoT report has a separate field for changes in positions compared to the previous report, so there is no need to calculate anything. All 7 major currency pairs can be quickly checked and the respective entries and exits executed.

There is no stop-loss, take-profit or any additional exit conditions. Previous position is closed when a new position in the opposite direction is entered. The size of the position does not increase when a new CoT report shows an entry signal in the same direction.

Below is an example of five trades executed during the Summer of 2012 based on the strategy of following the positions of Dealers and Intermediary traders. 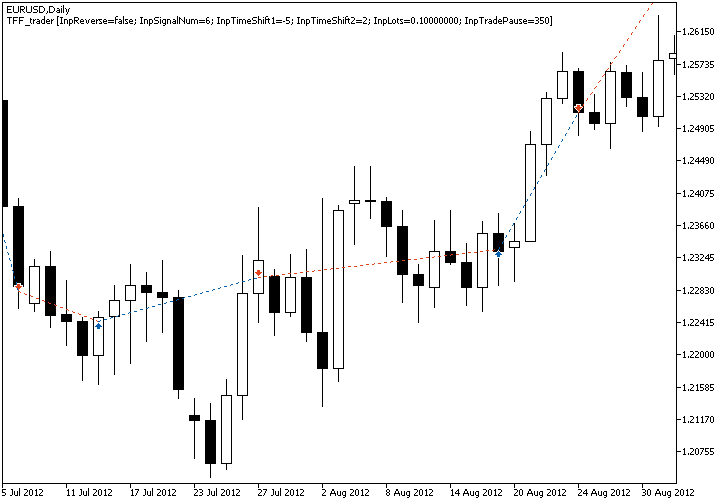 The first entry is a short signal generated on July 6, 2012. The following Commitments of Traders report shows the reason for entry. The data in the report are valid as of July 3, 2012. We are interested only in Dealer/Intermediary positions (the so called "smart money"). The currency we are looking at is Euro, meaning that the data is for EUR/USD currency pair. Changes in Dealer/Intermediary long and short positions are reported compared to the previous report (released a week ago).

The position is closed next Friday, July 13, 2012, when the report with data for July 10 is released. It shows a rise in long contracts and drop in short contracts, which is a signal for a buy trade (the first number is longs, the second is shorts, and the last one is spreading, which is not used in this strategy):

A CoT report released on July 20 shows that both the number of long and the number of short contracts increase compared to previous report. It means that the position remains open for one more week.

The long position lasts for two weeks as it is closed on July 27 using the data for July 24. A short position is opened in stead of the long one.

On August 3, when the report with July 31 data becomes available, it only confirms the short position:

The following Friday, August 10, both sides of the contracts rise for EUR/USD, which is not enough to warrant a termination of the current short position:

August 17 brings an end to this short trade as the Dealers' long positions grow while their short bets are dropping. A long position is opened immediately.

It survives for one week only as the next CoT report reverses the situation:

There are some important precautions to be aware of when trading CoT reports:

Do you have any suggestions or questions regarding this strategy? You can always discuss CoT Report Trading Strategy with the fellow Forex traders on the Trading Systems and Strategies forum.