Buy-and-hold (B&H) strategy is very popular in stock markets but is often deemed useless or even dangerous in the Forex market. Many articles and books simply state that a buy-and-hold strategy does not apply in currency trading. While there are certain limitations to using the buy-and-hold strategy in the FX market compared to equity markets, it is a viable technique, which would appeal to many foreign exchange traders or investors.

Buy-and-hold, as it name suggests, consists of two stages. The first one is a process of choosing and buying one currency with another. The second stage of B&H is a holding period of several years for the bought currency rate to rise against the currency sold. Although there is only "buy" in the name of this strategy, B&H traders are not limited to long side of the trades. Short selling works equally well in the Forex market.

Is it even possible in Forex?

The main argument of the experts, who oppose buy-and-hold in Forex trading, is that currencies lack the main advantage of the stocks. Whereas a company's value may soar hundreds percent up as result of some fundamental event (for example: entering new markets, successful invention, lack of competition, etc.), currencies cannot rally against each other in a similar way. The only exclusion being third-world currencies devaluating rapidly due to some political or financial turmoil. Of course, those are out this strategy's scope.

While this argument is completely valid, it does not remove the possibility of using buy-and-hold with currencies. The lack of rapid growth is easily compensated with extremely high leverage (up to 1:2000), while the inability of currencies to depreciate similarly to shares makes long-term Forex trading more flexible and controllable.

One of the possible obstacles for employing B&H strategy is a Forex broker. Firstly, it should be reliable enough to outlive the planned long-term trade, be able to execute the exit trade and transfer the initial investment with profit to trader's bank account. Secondly, it should be willing to hold the trader's position open for that long. The last factor should not be overlooked as the online FX brokers earn from spreads and commission that depend on the frequency of trading. Needless to say that in buy-and-hold this frequency is too low for a broker to earn anything significant. The only possibility for them to benefit from a long-term position is to tune the interest rate payments into their favor. That is why a choice of a broker for a B&H position is almost as important as a choice of currencies.

A lot of similarities can be drawn between buy-and-hold and carry trade strategies. Both imply long-term holding periods, both benefit substantially from the positive interest rate difference, and both do not have defined entry and exit rules. At the same time, the differences between these two trading techniques are quite important:

The first example depicts USD/RMB (USD/CNY, US dollar vs. the Chinese yuan or renminbi) currency pair. Which was, and still is, in a long-term downtrend thanks to the negative US trade balance with China and slow revaluation of yuan by the People's Bank of China. Not only a long-term investor would profit from a nearly constant currency pair decline, but he would also earn significantly from the positive difference between high Chinese interest rate and low rate used by the Federal Reserve. 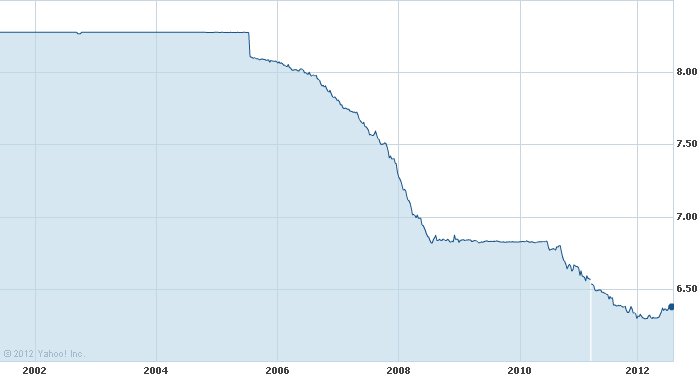 The second example is EUR/CHF (euro vs. the Swiss franc). Obviously, the pre-1999 part of the chart is synthetic but, nonetheless, is completely valid. The currency pair is trading in an extremely long-term downtrend since 1970's. To trade this bearish buy-and-hold setup, one would need to be able to endure quite a lot of major drawdown periods combined with prevalence of the negative interest rate difference between CHF and EUR. 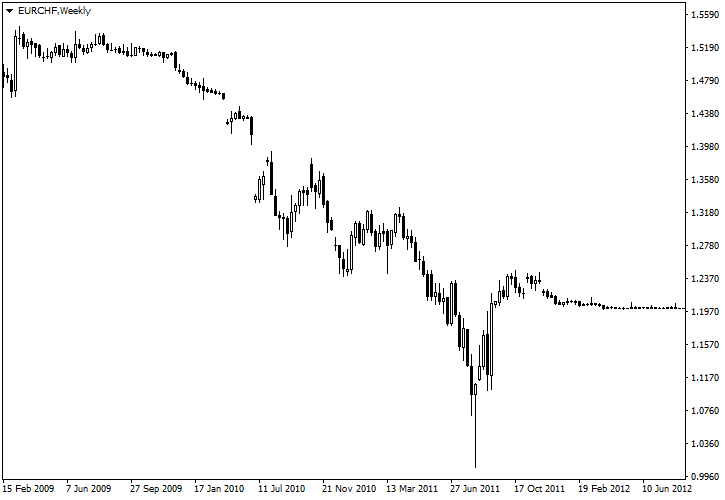 Do you have any suggestions or questions regarding this strategy? You can always discuss Buy-and-Hold Strategy with the fellow Forex traders on the Trading Systems and Strategies forum.