When assessing your trading performance, it is useful to look not only at such parameters as the average win size, average loss size, or the ratio of winning trades to losing ones. Looking at the maximum gain or, conversely, at the worst losing trade can also shed light on the viability of the employed trading method. However, one of the overlooked parameters is the maximum length of the losing streak encountered by a trader.

For example, catching three losses in a row can be a daunting experience, but even with such a high winning ratio as 70%, there is almost 1% probability of any particular four trades coming one after another to be losers. Longer streaks are definitely possible too, especially when the winning ratio is lower and the trading frequency is high. Yet the danger of losing streaks lies not only in the number of trades, but also (and mainly) in the size of those losses and quite often in the prolonged time before another winning trade. In fact, losing streaks should be categorized by three parameters as described further.

An example of a losing streak composed of 6 losses in a row is presented below: 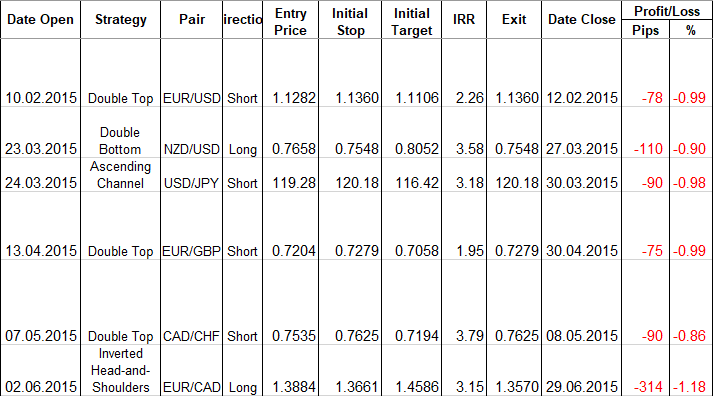 The simplest form to measure a losing streak is to count the number of red trades encountered without interruption. The worst such streak will be the one composed of the maximum number of losing trades. For example, if we have 12 trades arranged as follows: win, loss, loss, win, win, win, loss, loss, loss, win, loss, win; then our worst losing streak is 3 trades. The advantage of this method is that we can easily detect the highest number of losing trades executed continuously. The tradeoff is that you know nothing about how severe this streak was in terms of money lost. This is where the next method comes handy.

A method that requires some more calculation is to sum up the loss amount (in actual money) accumulated in a given streak. We can easily imagine that in the above example of 12 trades, the first streak of two losses could be worth, let's say, $200, while the longest one (three trades) could be worth only $150. Obviously, the 2-trade streak here bears the most devastating effect on the account balance even though it is shorter than the one picked by the previous method. The advantage of this way to look at losing streaks is that you pay attention to the actual performance result of a given streak. Unfortunately, it is telling little us about the time aspect of the trading periods devoid of gains.

If we consider the duration of trades and also of the periods between the trades, we can come up with another measure to assess the losing streaks — how much time was spent after the first losing trade and the next profitable one? Let's return to the initial example: the isolated loss (11th trade) does not look too worrisome. But if we assume that the first 10 trades have been done in one week while there have been four months between the last two trades, we get a grim picture — a very long period with just a single loss to look at. After all, a  Forex trader would feel the pressure to make money for a living, and months without a profitable position would be a disaster.

However we measure our loss series, there are always two main detrimental effect way have on our trading:

It is difficult to see anything good in such a discouraging outcome as an uninterrupted row of losses, but going through a particularly long series of losing trades can be a good medicine against the Martingale strategies. It teaches that however good your strategy is, you still will be encountering strings of bad luck.

Talking about the worst streak of Forex losses can be painful, but we learn important lessons from them. Although diverting too much of your attention to the biggest winning streaks might seem unnecessary. Additionally, focusing too much on your winning streaks can impair your judgement and induce excessive .

Similar to losing streaks, winning streaks can be measured using three different techniques: by number, by size, and by duration.

The same example of 14 trades can be viewed at a different angle. The final streak of 2 wins could be much larger than the longest streak of 4 wins highlighted by the simple method based on number. For example, the final 2 wins could be worth $500 in total, while those 4 wins could be just $400 in total. This method should be preferred when analyzing abnormal balance peaks and the ability of your trading system to climb out of deep drawdowns. For a more complex approach, you also need to differentiate the streaks as measured by time.

The same streak of 2 wins near the end of the example set of trades could be 2 weeks long, while the longest streak of 4 wins could be a result of one successful day. Of course, winning $400 in a day is always better than winning $500 over 2 weeks, it is important to analyze the lengths of your streaks. The time duration of your winning streaks matter to your overall success as a Forex trader. Any incurred loss takes an emotional toll on you. Conversely, prolonged periods without losses inspire confidence in your trading strategy and make you less .

Looking at your long streaks of profitable trades might be lots of fun and pride, but is there any point in doing so? Knowing that your strategy is capable of producing uninterrupted sequences of purely winning positions can be useful. Such strategy, even if prone to drawdowns, will have higher probability of recovering from them. Additional boon of operating a positively streaking system, as mentioned earlier, is the morale boost it gives you, especially if you are not too experienced in Forex trading.

On the  side, paying too much heed to your wins could give you a false idea of being invincible as a trader, which leads to risking too much and to overtrading. This can be mitigated by an impartial and unbiased view of your own trading history. Revising your trading plan should be based on a systematic approach and remain unaffected by emotions or unusually long streaks of gains.

An example of a trading journal excerpt, which shows a winning streak of 3 profitable positions in a row, is shown below:

If you have questions or if you want to share some details on the biggest streak of winning or losing trades you have recorded in Forex trading, please proceed to our community forum.