How to Automate Trailing Stop-Loss in MetaTrader with EA?

A trailing stop is one of the most sought-after tools by Forex traders who practice risk management. It is an important part of many strategies and works to limit losses and secure profits. Trailing stop means moving the stop-loss level in the direction of the trade according to specific rules. You can automate this task through a trailing stop EA in MetaTrader.

What Is Trailing Stop-Loss?

So what exactly is a trailing stop?

A trailing stop is the short for trailing stop-loss — it is the activity of moving the stop-loss price when the current price moves in favor of your trade.

You are basically applying a trailing stop. You are moving the stop-loss following the price, until the price eventually hits your take-profit target or your stop-loss. 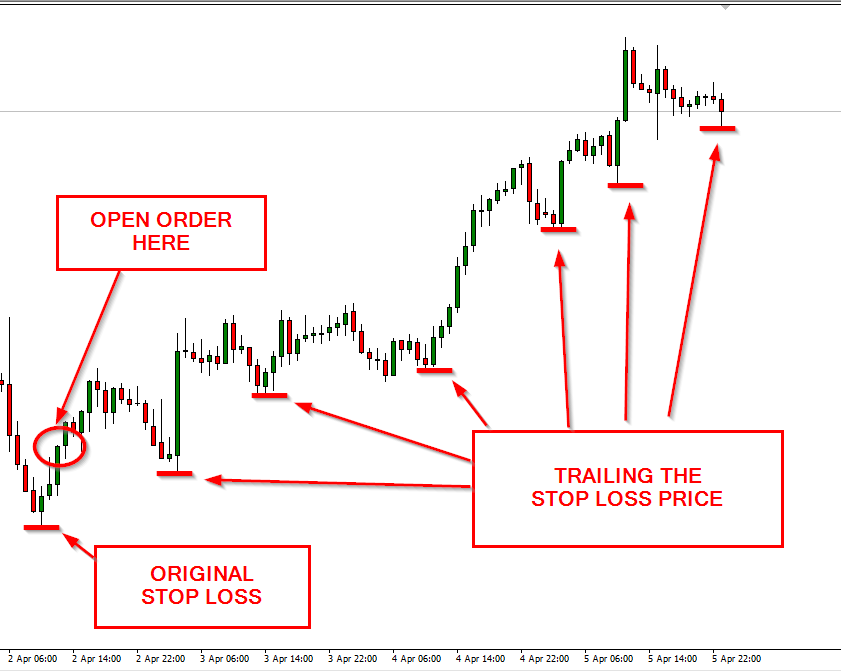 As you will see further in this guide, there are several types of trailing stops.

There are several expert advisors (EA) that can automate this process in MetaTrader.

Why Use Trailing Stop?

Using a trailing stop is a very common practice both with beginners and among experienced traders.

It is often required by the risk management rules of popular trading strategies.

The main benefits of applying a trailing stop to your trades are:

Do not underestimate the power of a trailing stop because it can be the difference between a losing and a profitable strategy.

Difference Between Trailing Stop and Stop-Loss

Trailing Stop and stop-loss are closely related but there is a key difference between them.

A stop-loss price is a price recorded in the trade that when hit will immediately close the trade.

A trailing stop is the activity of updating the stop-loss price when the price moves in favor of the trade.

It is very important to understand that the two are executed by MetaTrader differently.

A stop-loss price is registered on the server together with the trade, so if that price is hit by the current price the server closes the trade.

A trailing stop, on the other hand, is performed on the client side. This means that you configure it on your terminal, and your terminal must be open to update the stop-loss price.

In other words, you cannot have a trailing stop working without having your MetaTrader software running.

This is why, it is best to use a VPS server to run a trailing stop for you.

How to Enable Trailing Stop in MT4?

At this point, you should understand fairly well what a trailing stop is and why you should use it.

MetaTrader platform offers a very simple trailing stop option that you can enable.

To set an auto trailing stop in MT4, right-click on a trade line directly on the chart or on a trade entry in the Trade tab of the Terminal panel.

You will see a Trailing Stop option property that expands into some settings.

With that option, you can set the number of points of distance between the current price and the stop-loss price. 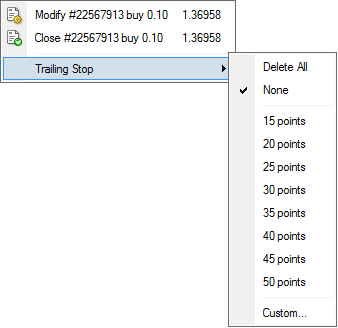 Once this is set, your MT4 client will move the stop-loss by following the current price when it moves in the trade's direction, keeping the distance equal to the number of points you set.

For example, you set a trailing stop of 100 points (which is the same as 10 pips for quotes with 5 decimal places) on a long position EUR/USD opened at 1.12000.

So, as you can see, the trailing stop acts as a backstop for a trade.

How to Enable Trailing Stop in MT5?

To enable an automatic trailing stop mechanism in MT5, the process is the same as in MT4.

Right-click on a trade line directly on the chart or on an order entry the Trade tab of the Terminal panel.

MT5 will trail the stop-loss by following the price at a distance equal to the number of points you set.

The auto trailing stop facility in MetaTrader is too limited. It is too basic and lacks some important features.

There are many expert advisors that can assist with a trailing stop with extended functionality.

Further below, you will find some popular trailing stop methods along with working trailing stop expert advisors for MT4 trading platform.

How to Move Stop-Loss to Breakeven?

A very simple form of a trailing stop is to move the stop-loss to breakeven, i.e. the open price.

This can be done when the current price is at a specified minimum distance from the open price.

For example, you want to move the stop-loss to breakeven when the price is 50 pips above your buy order open price.

Such a trailing stop only acts once. It moves the stop-loss to breakeven and then ceases operation.

Move Stop to Breakeven is a free MT4 expert advisor that can automatically move your stop-loss to breakeven according to your settings.

A moving average indicator can be an indicator that you can use as a trailing stop.

This type of a trailing stop is similar to the one that you can set in MetaTrader, but it only triggers at specific steps.

For example, you could set a trailing stop that incremented every 20 pips. A long position in EUR/USD open at 1.1200 and with original stop at 1.1180, with a 20 pip fixed step trailing stop would act the following way:

The stop-loss is moved only at specific steps. Basically, if you draw a grid of horizontal lines with distance equal to the step size, you will see the trailing stop applied at each next line of the grid. 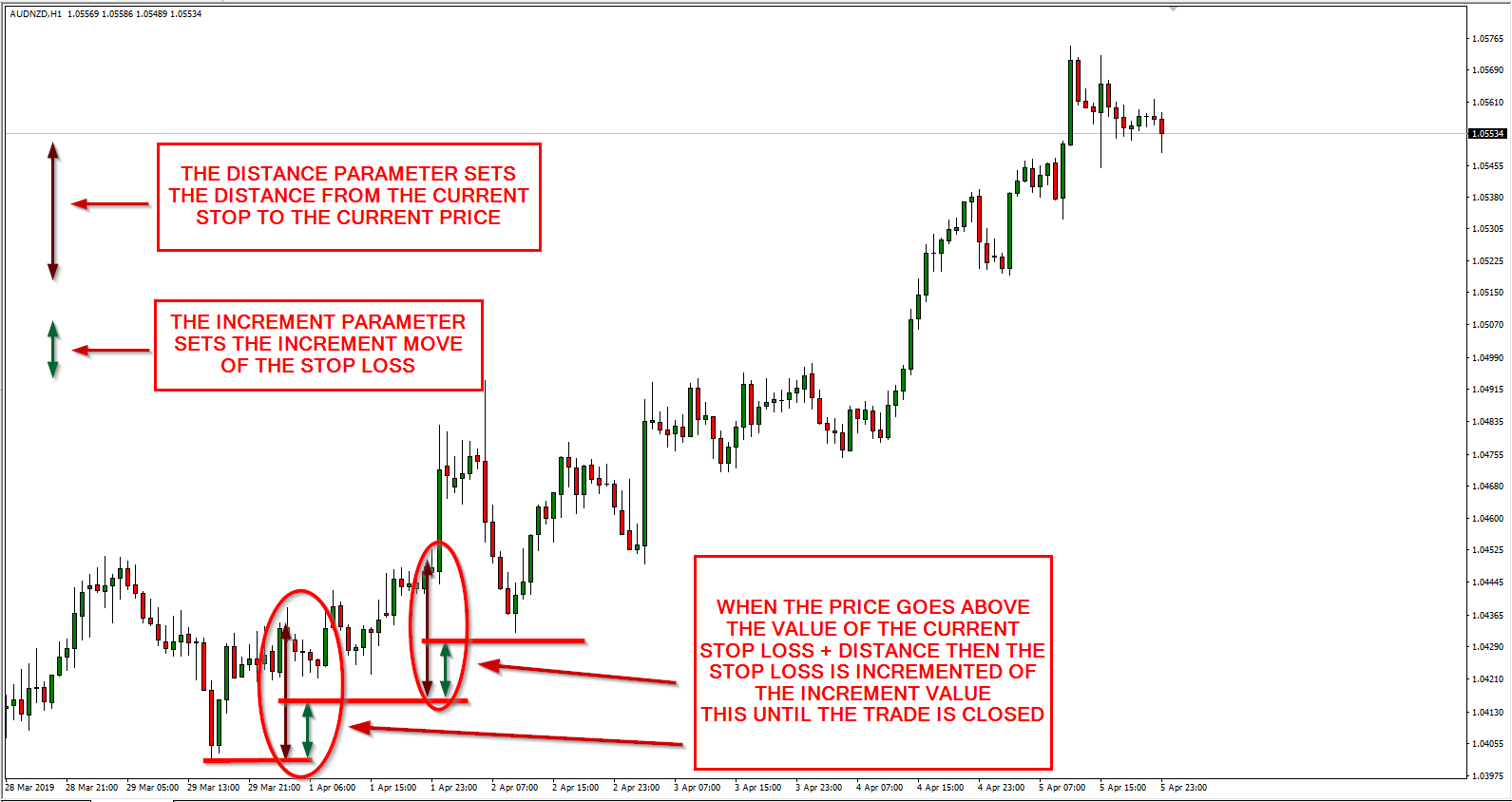 Fixed Step Trailing Stop is a free MT4 expert advisor that can automate the fixed step stop-loss incrementation for you.

ATR stands for average true range indicator. It is a very popular utility metric that traders use to assess the market's volatility. ATR tells you how volatile the price has been during the recent N candles.

You can use this indicator to set a stop-loss and as a trailing stop. For example, if you see an ATR value of 30, you can expect the price to have a range of 30 pips on average during the current candle. This can help you setting a volatility-based stop-loss. Your trailing stop can be based on this value too.

ATR Trailing Stop is a free MT4 expert advisor that uses ATR values to automatically trail a stop-loss according to your input parameters.

Parabolic SAR (or PSAR) is another indicator that can act as a foundation for a sound trailing stop.

However, it might be more suitable during strong moves and defined trends. It is probably not the best choice of a trailing stop for ranging markets. 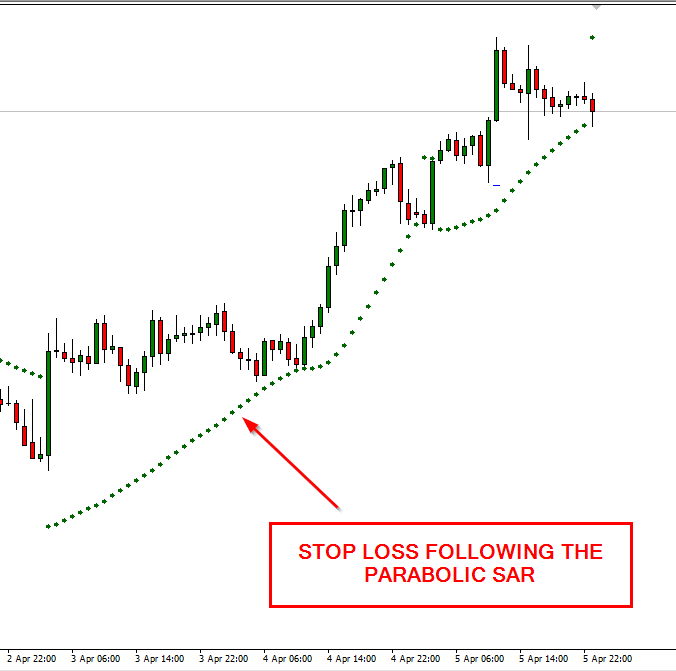 Supertrend has only a few options and can follow the trend pretty well. Because if this, it can quickly react to trend reversals, making it an ideal solution for a trailing stop.

Fractals is another popular indicator that can provide a decent trailing stop value.

As you can see, the arrows placed by the fractals indicator can be good levels for a stop-loss in a trending market.

In some cases, a conservative trailing of a stop order can be performed using recent higher highs or lower lows.

As is the case with other trailing stop methods, trailing stops to high/low values is better done automatically by trading software rather than manually by the trader.

High/Low Trailing Stop is a free MT4 expert advisor that detects the higher highs and lower lows for the past N candles and trails the stop orders of your trades automatically.

In this guide, you have learned about the concept of trailing stop and its importance in risk management. You have also found out how to automate your trailing stop process in MetaTrader via expert advisors.