The ever increasing number of international transactions demands smooth settlement process, which involves conversion of one currency into another. The Forex market prevails primarily for this purpose. However, the disequilibrium in the demand and supply of currencies in the global arena causes continuous fluctuations in the exchange rate of currencies.

Since the exchange rate is directly linked to the economic stability, the central banks of all the countries closely monitor the forex market and take adequate actions, whenever needed, to protect the vested interests of the country they represent. In this regard, the central banks play a major role in setting the currency exchange rates by altering the interest rates. By increasing interest rates the central banks indirectly (on the basis of high return on investment) stimulate traders to buy the respective country’s currency. This process drives the value of the corresponding central bank’s currency higher in comparison to other currencies.

However, the action discussed above is only one of the methods adopted to keep the currency exchange rate stronger. There are several other complex methods implemented by a central bank to prevent an economy from ailing. Before the strategies are discussed, it is vital to understand the basics of foreign exchange mechanism.

The currency exchange rate of a country directly and indirectly affects the various segments of a country’s economy in the following manner: 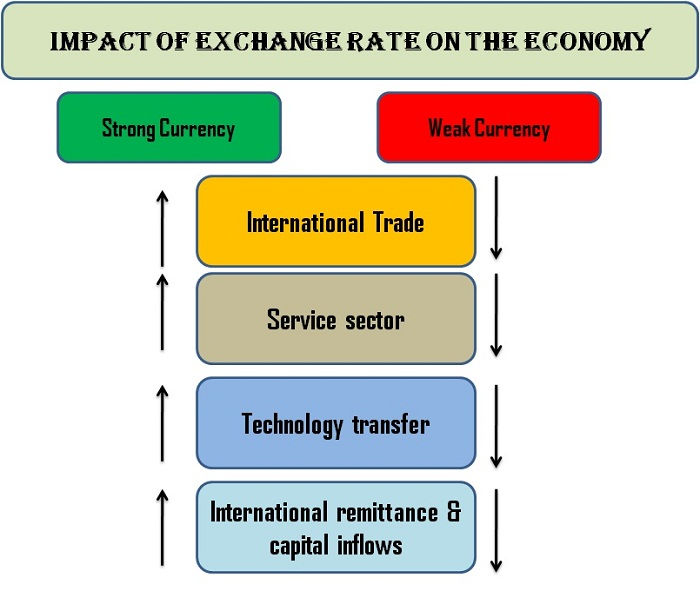 Industrial sector can grow only when a country has adequate foreign exchange. When the exchange rate is poor, the value of goods which can be purchased for every dollar equivalent of currency will largely decrease. This would deplete the foreign exchange resources quickly. In turn, a lack or shortage of foreign exchange would create difficulty in importing essential goods, raw materials, and much needed machinery. When vital goods fall short of requirement there won’t be any surplus good available for export. This would cause a spiraling effect on a country’s economic growth.

The local economy benefits when the currency exchange rate of a country is stronger. The reason is that overseas clients need to spend more to purchase one dollar equivalent of service (tourism, banking etc.).

A country with a strong exchange rate will have better bargaining power. Additionally, it becomes easier to purchase high end technologies without draining the foreign exchange reserves.

A country with a strong currency will not default from its debt obligations. Thus, investors will have no issues in getting dividend / profit remittances. This would encourage capital inflow thereby strengthening the local economy further. 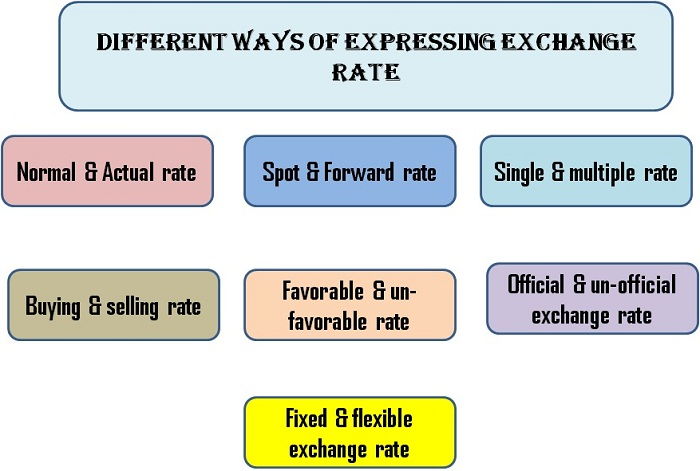 a. Normal and actual rate

b. Spot and forward rate

The dealers (banks, financial institutions) operating in the forex market will offer lower and higher rate respectively to clients approaching to sell and buy a country’s currency. The lower rate offered is the buy rate while the higher rate quoted is the sell rate.

If the currency exchange rate increases with respect to the currency of another country then it is called as favorable rate and vice versa.

How exchange rate is determined?

Over the course of time, three theories were put forth by economists and think tanks for the determination of foreign currency exchange rates. They are: 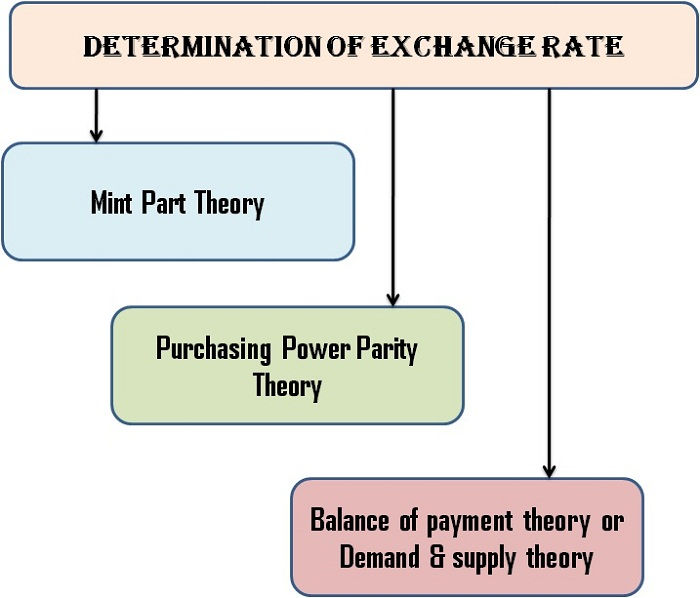 The theory is based on the Gold Standard. A country following Gold Standard will also have its currency in gold or convertible into gold at a fixed rate. Additionally, the currency will also have a fixed ratio relationship (mint par exchange or mint par of excellence) with currency of another country following the gold standard. Presently, the gold standard is not followed by any country. Thus, mint par theory has lost its significance.

The theory was first arguably refined and put forth in presentable form by the Swedish economist Prof. Gustav Cassel in 1922. This theory for paper currency states that the rate of exchange of two currencies should match the quotient of their respective internal purchasing power.

From the theory, it can be inferred that the price rise in a country brings down the value (or purchasing power) of its currency. Even though the theory can be applied to all currencies, it neglects other external factors (speculative activities, capital inflow/outflow etc.) which would impact the exchange rate.

c. Balance of payment theory or demand and supply theory

The theory is comprehensive, practical and realistic. Even though the theory is widely accepted, still it suffers drawbacks from assumptions related to balance of payments.

Several factors contribute to the volatility of foreign exchange rate. They are:

When a government or central bank regulates the inflow and outflow of foreign exchange then the prevailing economic system will exhibit the following characteristics:

Theoretically there is no limit for the rise or fall of a paper currency. Thus, adverse changes in the exchange rates will create unmanageable economic instability. When the currency of a country strengthens (rise in the exchange rate) there will be positive effects (rising productivity, lower unemployment, high economic growth, incentives to cut cots etc.,) overall. However, if a currency becomes stronger because of speculative activities then it would lead to a recession. Swiss Franc is a classic example for a speculation driven currency. Problems in the USA and the Euro zone naturally lure investors to Switzerland, which is considered as a safe haven for investments. Thus, Swiss Franc often sees fundamental overvaluation and the central bank should intervene to prevent the country from falling into recession.

A weak currency will have undesirable effects on the economy. It will adversely affect imports and capital inflows, which form the nerve center of any healthy economy. Thus, no responsible central bank will allow its currency to fall freely. With a weak currency in place, no country in history has successfully come out of debt or recession.

Considering the facts mentioned above, it becomes very important to closely monitor the exchange rate and intervene, if necessary, to keep the economy healthy and growth oriented.

Basically, all the methods adopted to implement exchange rate control can be classified under two groups. They are:

a. Direct and indirect methods

b. Unilateral, bilateral and multilateral methods 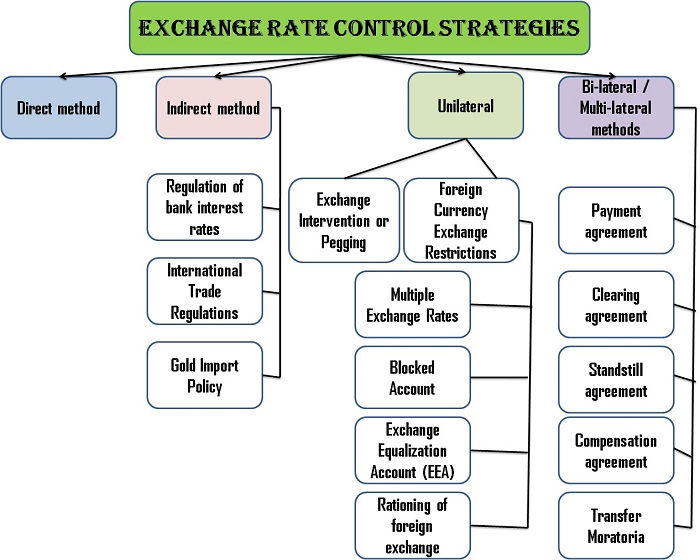 It is a soft form of intervention in the market. As per this strategy, the central bank of a country will intervene in the market to bring the exchange rate to a desired level, if there is a concern about speculators driving the price too high or low.

By controlling the demand and supply of currency, the central bank of a country can influence the exchange rate. The following are the widely adopted measures to keep the exchange rate under check:

The bank accounts of foreigners are blocked under this system. If there is a dire necessity the central bank will even transfer funds from all the blocked accounts into one single account. However, it will create bad impression about the country thereby leading to lasting negative effects on the economy as a whole.

Under this system, a central bank will have total control over the foreign currency and offer different rates for purchase and sale by the importers and exporters respectively. This is done to control the capital outflow from the country. It can be construed as rationing of foreign currency by price instead of volume. The system is complex and only creates additional headaches to the central bank.

In this method, the control over foreign exchange will solely lie in the hands of the central bank, which will decide the quantum of foreign exchange to be distributed for every incoming request. No individual or corporate can hold foreign currency. Only urgent needs would be considered.

To control short-term volatility in the exchange rate, the central bank of UK, following the exit from the Gold Standard, created a fund named Exchange Equalization Account in 1932 to prevent unwanted volatility in the exchange rate of Pound Sterling. The strategy was later adopted by USA (Exchange Stabilization Fund) and other European countries including Switzerland and France.

Under this system, the debtor and creditor country enters into a payment agreement to overcome the delay in the settlement of international transactions. The agreement will stipulate the methods to be followed for controlling the exchange rate volatility. Usually, the method includes but not limited to the controlled distribution and rationing of the foreign exchange.

This exchange rate control strategy is implemented through an agreement between two or more countries. Based on the agreement, the exporters and importers respectively will receive proceeds and make payments in their domestic currency. For this purpose a clearing account with the central bank is used. Thus, the need for foreign exchange is avoided, which in turn reduces the exchange rate volatility. The system was used by Germany and Switzerland during great depression in 1930.

Under this system, through a moratorium, a central bank converts short term debt into long-term debt. Such a process offers adequate time for repayment. This removes the downward pressure on the exchange rate. The system was implemented by Germany in 1931.

The process involves a barter agreement between two countries. One country will be a net exporter and other one will be a net importer. The value of exports and imports will be equal. Thus, the need for a foreign currency is avoided and the exchange rate remains stable.

Under this system, the central bank bans all kind of payments to creditors abroad. The debtors should make domestic currency payment to the central bank, which will disburse funds when there is overall improvement in foreign exchange reserves.

a. Regulation of bank interest rates

When the balance of trade becomes unfavorable, a government can impose import restrictions through a series of measures (tough clauses, changes in policy, quota system and additional tariffs). Simultaneously, exports can be promoted (international business exhibitions, subsidies etc.). This will ultimately make imports unattractive and boost exports. The net gain in the foreign exchange reserves will obviously strengthen the exchange rate.

Barring few countries in Africa, almost all others are net importers of gold. By restricting (increasing import duties) the import of gold, the exchange rate can be altered. This tactics is often used by India, which imports about 700tons of gold every year. When import decreases, foreign exchange reserves increases thereby resulting in a better exchange rate.

The Chinese currency had undergone a huge transition in the last four decades.

Most of South Africa’s exchange control measures were taken to resolve the external pressures.

Following a mass protest to topple the Venezuelan government in 2003, CADIVI (Commission for the Administration of the Currency Exchange) put forth exchange controls to prevent capital flight from the country.

On the other hand, Iranian Rial is a classic case of currency manipulation orchestrated by the government. When the Iranian government lost its ability (due to imposed sanctions) to keep the Rial high through the use of petrodollar, the currency started declining dramatically. The Iranian currency had declined from 68.75 Rials to a dollar to 35,000 Rial to a dollar in less than three decades. Most of the erosion took place in the last five years.

History has proven that only those countries with liberalized exchange control mechanisms ward off financial difficulties at the earliest and register remarkable economic growth. After all, the nature of human being is to break away from any kind of restrains and exchange control is no exception to that.