The Role of Emotional Intelligence in Forex

As mentioned in the preface, emotional intelligence is made up of four main skills: self-awareness, self-management, social awareness, and relationship management.

While self-awareness and self-management reflects the personal competence of an individual, social awareness and relationship management reflects the social competence. Alternatively, self-awareness and social awareness can be clubbed under ‘what a person sees’, while self-management and relationship management can be clubbed under ‘what a person does’. Thus, it can be understood that all the four skills are intertwined in a complex fashion. Let us quickly go through each of those skills before discussing its impact on Forex traders in particular. 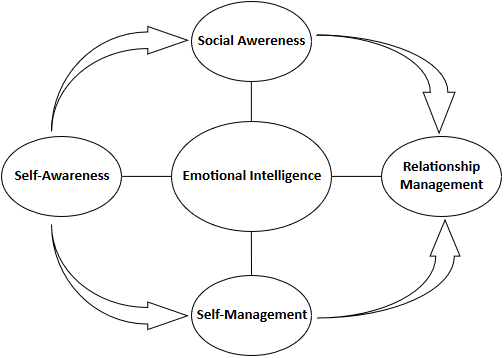 The emotional response to an event is generated in the brain’s limbic system.  The primary senses enter into the brain through the spinal cord. However, before reaching the portion of the brain, which makes rational decisions, the signals enter the limbic system. Thus, adequate balance is necessary between the rational and emotional centers of the brain. Only then a person will be able to take actions without any dilemma. In other words, the level of emotional intelligence is decided by the quantum of effective communication between the rational and emotional portions of the brain.

Critical skills based on emotional intelligence

Research has shown that a person who lacks emotional intelligence will be unable to control his anger. Ultimately, it would force the person to take wrong decisions. Rationale will not prevail where anger exists. A Forex trader who is prone to anger will get frustrated and make hasty trading decisions. Hasty decisions will lead to a loss. It will not end with that. The Forex trader, clouded by anger, would then try to take revenge on the market, thereby leading to more losses. Finally, the account would get blown off.  A trader with admirable emotional intelligence would sort out the mistake instead of getting angry.

Time management is extremely important in the life of a currency trader, and emotional intelligence enables a person to achieve that objective. A Forex trader should allocate time for preparing himself for the next trading day. This includes market analysis, determination of entry and exit points, and maintaining a trading diary. Emotional intelligence will enable a trader to prioritize requirements so that none of the trading related activities are missed out due to lack of time.

Flexibility is another must have virtue of a Forex trader. Studies have shown that emotional intelligence influences the flexibility of a person in an astonishing manner. A rigid trader will find it hard to accept the mistakes. When market does not move as expected, a flexible trader will close the position and will wait for clarity to emerge. On the other hand, a rigid trader will average out losses until the account gets blown off. Professional traders are always flexible. They will vouch for the fact that market neither has a top nor bottom.

A currency trader should be accountable for his actions. The response can be either positive or negative. That does not matter. However, a trader should not shy away from being accountable. That is what leadership is all about. Blaming on the market or the broker for the loss is quite commonly seen. While there is no denial of the fact that there are bucket shops who loot traders’ funds either by hook or by crook, most of the brokers adhere to business ethics. Thus, a trader should introspect himself and analyze the mistakes instead of trying to put the blame on external aspects. Emotional intelligence makes a person accountable, and any financial trader certainly needs that.

Interaction and communication skills are a must for succeeding in any profession and foreign exchange trading is not an exception to this rule. A trader should not hesitate to communicate with a broker in case he has any doubt regarding the spread, doubtful price spikes, deposit/payment related issues, trading platform related problems, overnight swap rates charged, etc. Hesitation to communicate will only aggravate problems. If the person is new to Forex trading, then he should not have any qualms in asking doubts or exchange ideas with experienced professionals through forums and social media platforms. Emotional intelligence assists a trader to express his opinion without any constraints and in an eloquent manner.

As discussed earlier, the primary senses enter the limbic system before entering the portion of the brain which makes rational decisions. Thus, any decision made by a person is the outcome of the cumulative effect of the rational and emotional center of the brain. If the emotional center is not performing well, then the brain’s response will not be adequate enough to resolve the issues. Studies have proven that the emotional intelligence impacts the decision making ability of a person. It is the decision making ability that ultimately decides the profit factor and drawdown of a Forex trader. A trader with good emotional intelligence will be able to make smart decisions at the right time.

Self-esteem is yet another virtue found in people with higher levels of emotional intelligence. Emotional intelligence enables a person to trust in his abilities. A Forex trader who lacks trust would hesitate to place a buy or sell order even if there is an ideal trade setup. After placing the order, the trader will not patiently wait for the price movement to begin as desired. Ultimately, the trader will exit early and lose an opportunity to generate good profits. On the other hand, a seasoned professional will ride on profits and cut down losses quickly. The maturity and confidence shown by a professional trader is an outcome of the influence of emotional intelligence.

Assertiveness is yet another must have trait in a Forex trader. A trader should be able to justify his actions in a soft manner, if needed, to any other market participant. He should neither be aggressive nor be too passive in his response. An aggressive mentality will create a bad impression about the trader, while too much of passiveness will make others consider the trader to be incapable. Emotional intelligence, according to studies, is primarily responsible for making a person assertive.

Empathy indicates the ability of a person to understand the emotions of others. In the case of Forex trading, empathy also corresponds to the ability of a trader to assess the response of other market participants to a particular event or economic data. Unless a trader gauges the probable reaction of the majority of market participants, it will be difficult to take a suitable position in the market. This might end up in costly errors. Emotional intelligence nurtures the ability of a trader to understand the notions of the market and guides him to take decisions in line with the primary trend of an asset.