In this guide, you will discover what rate of change (ROC) indicator is and how it can be used in Forex trading. You will see the formula to calculate ROC, what it indicates, and you will learn how to set up alerts for important rate of change indicator events.

What Is Rate of Change?

Rate of change is, in its basic meaning, the percentage of difference between the price at one moment and the price at some previous moment.

People usually refer to rate of change with the short form of ROC.

Rate Of change is an indicator of momentum, so it gives some information about the momentum of price change.

The calculation of ROC is very easy and only requires two values:

Once you have the Close price of an instrument at two different times, you can easily calculate ROC using this formula:

Which can also be presented in this alternative form:

Rate of Change in MetaTrader

Rate of change indicator available in MetaTrader platform is a visual representation of the current and historical ROC.

ROC indicator in MetaTrader is a momentum indicator constructed as an oscillator.

Rate of change draws a line oscillating around the zero level, indicating the momentum of the current trend. 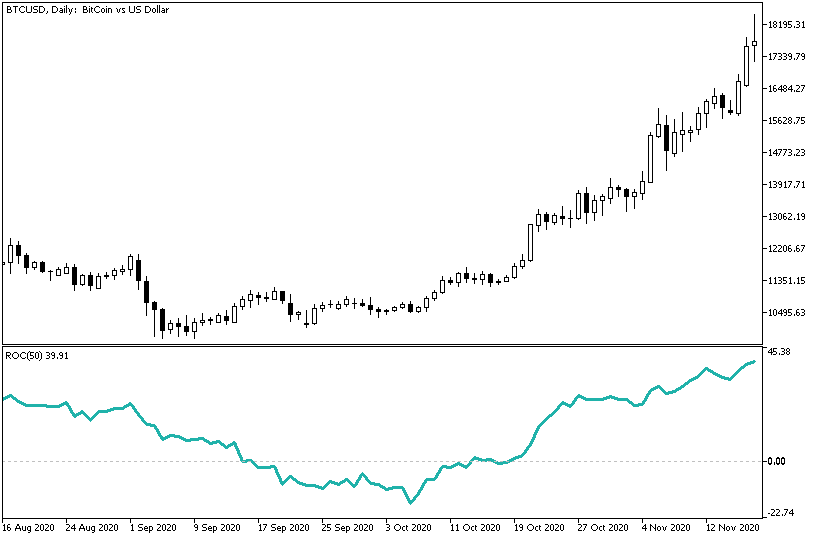 How to Use Rate of Change?

ROC indicator is useful to spot various possible behaviors in the market.

It would be hard to base a trading strategy entirely on ROC, however, the indicator can provide information to make better decisions.

Rate of Change Crossover with Zero

Rate of change can be used to spot trend reversals and trend continuations. When ROC crosses the zero level, it can indicate a momentum reversal.

It is important to note that ROC suffers from whipsaw especially around the zero mark, where the direction is still unclear. 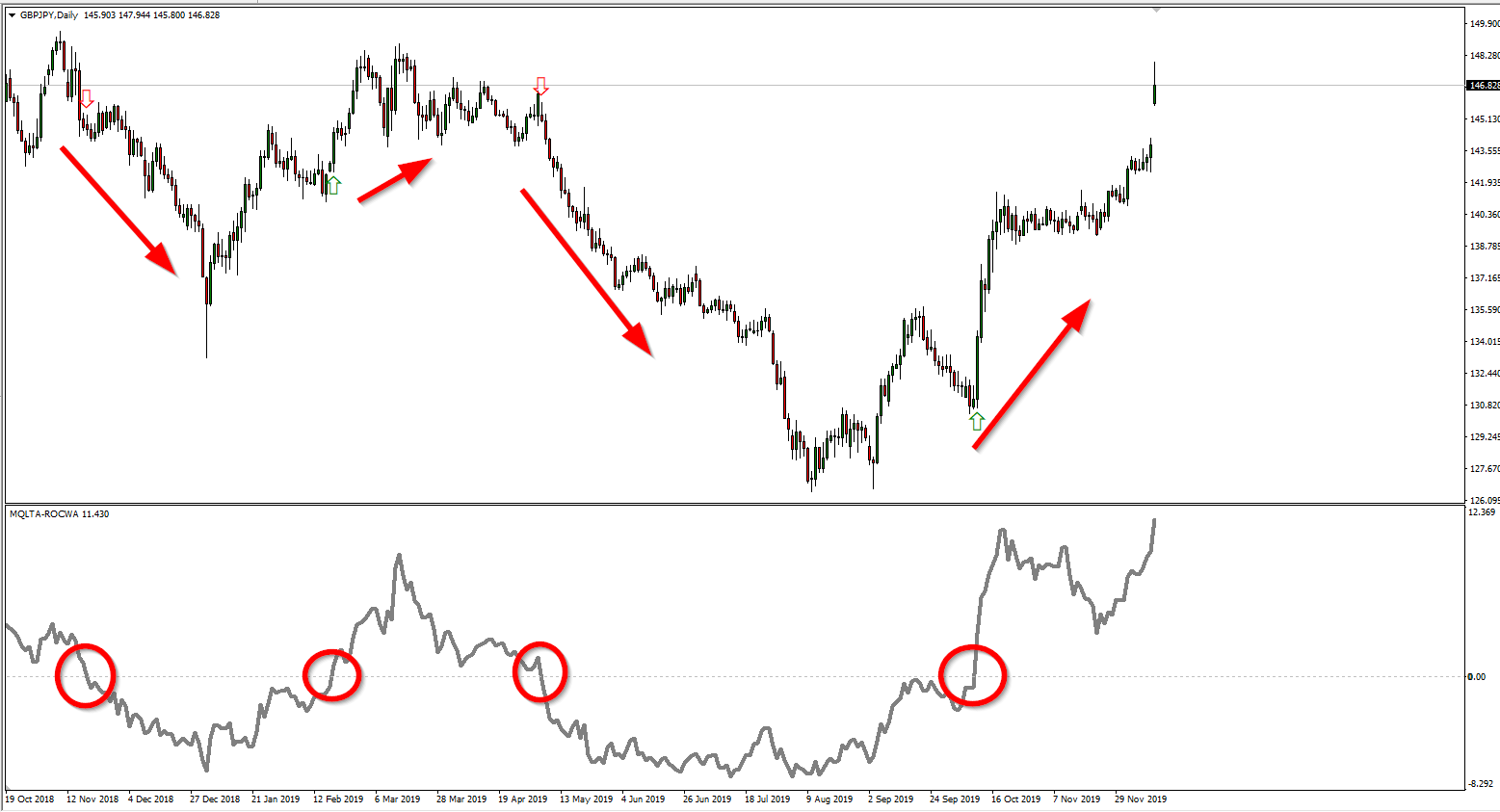 Conversely, a stabilized large positive or negative value of rate of change indicator may signal of a strong trend with a continuation more probable than a reversal.

Rate of Change for Overbought and Oversold

ROC can also be used to see when the momentum of a trend is exhausting.

Similarly to stochastic and RSI, ROC can be used to detect overbought and oversold situations.

Instead of basing the overbought and oversold on fixed levels, it makes sense to compare the current spikes and dips to previous tops and bottoms. 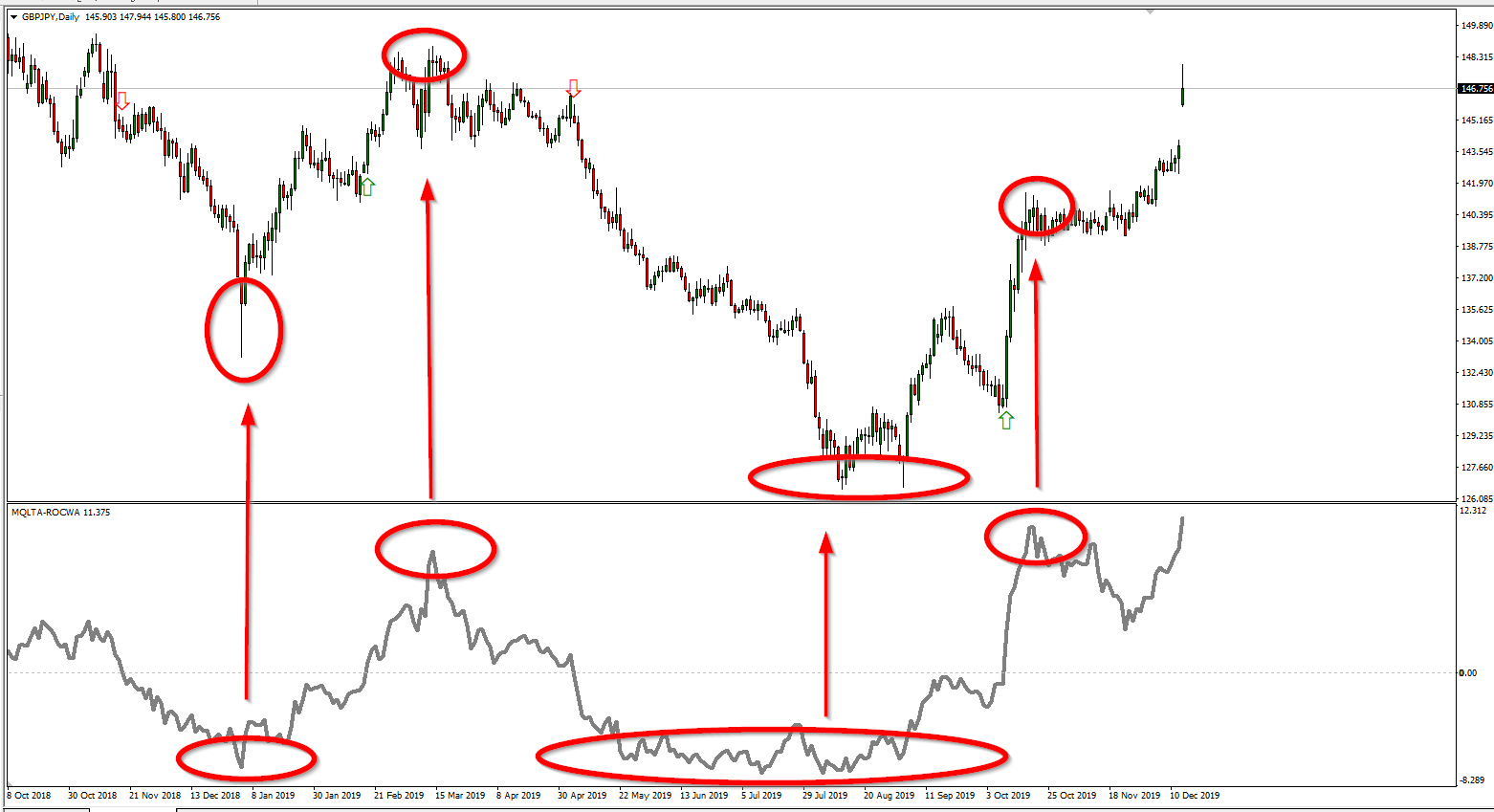 Another way to use ROC is ROC divergence. This method is similar to the divergence studies done with RSI and stochastic oscillators.

Basically, you look for a higher high in the price chart reflected by a lower high in the rate of change line to spot a bearish divergence and the potential for the uptrend to end.

If you see a lower low on in the price accompanied by a higher low in the rate of change line, a bullish divergence occurs with a possibility of a switch from a downtrend to a rising trend.

A hidden bearish divergence with ROC is spotted when it is ROC that is making a new lower low while the price fails to set a new lower low, this is usually considered a signal for the bearish trend continuation.

If the rate of change line is recording a new higher high while the rising price fails to set a new higher high, it is called a hidden bullish divergence and could be a signal for the bullish trend continuation.

Note: Although the standard MetaTrader indicator for rate of change doesn't support built-in alerts, it is often sensible to get some sort of notifications when following the rate of change crosses with the zero line. For this purpose, you can use our free ROC Alert indicator for MT4 and MT5.

In this guide, you learned about rate of change indicator and its utility in trading. ROC indicator in MetaTrader can be used for trend following, trend reversal, and momentum detection.