Book Review: Trading in the Zone by Mark Douglas 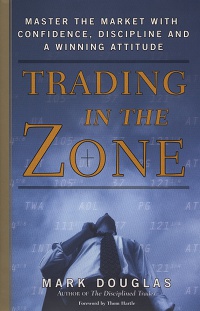 Almost twenty years of coaching experience did not pass unnoticed for Mark Douglas when he created his apex work — Trading in the Zone. As the book's full title suggests, its aim is to help trader master the market with confidence, discipline, and a winning attitude. Actually, the whole book's subject can be summarized by that "winning attitude." Before proceeding to any further details, it can be said that if your Forex trading attitude cannot be described as winning, you are strongly suggested to get this book (you can borrow one from a friend, if you do not want to spend money on it.)

Mark Douglas wrote his first book on the role of discipline and psychology in trading, The Disciplined Trader, back in 1990 — an era that has quite a lot of differences with our days in terms of financial markets and their accessibility. His work from 2000, Trading in the Zone, is not only more but also extends the study of successful trader's thinking introduced in the previous book.

As you have probably understood already, we are very enthusiastic about this book. That is really so. Although, you will easily find some really stupid things there, it is worth all the time and money spent on it. It is also one of the few books whose Kindle version is not a complete crap compared to the paper version.

The main contents of Trading in the Zone is dedicated to one goal — becoming a consistently successful trader. According to Mark Douglas, it is a big mistake of the majority aspiring traders does it all wrong by studying the market's behavior rather than starting looking into one's own mind and traits. There are five "fundamental truths" about the market at the core of the "right" trading :

Anything can happen means that the market is composed of traders and there is no way any of the traders can know with certainty what the other one is going to do. Even if some technical, fundamental, or sentiment indicators strongly forecast some movement, the real outcome could be completely different as it may take only one trader to affect the prices.

But that is not the problem for earning money. Like the casino owner does not need to know what will happen with the particular spin of roulette, or like the insurance company does not need to know whether specific contract will get claimed or not. What is important to know is that the total of a big enough series of outcomes will be in their favor.

The distribution of these outcomes can be only random. There may be streaks of losses or gains, but there cannot be any dependency between two outcomes because anything can happen.

By admitting that every moment of the market is unique and cannot be repeated, we acknowledge that what we see now, no matter how similar it is to some previous moment in history, will not necessarily end up similarly to that previous outcome. If we won three times in a row using some pattern it does not mean that we will win the fourth time we use that pattern. Because anything can happen.

Accepting these five truths leads to elimination of fear and euphoria from the trading process. A trader will enter a  state of mind and will operate "in the zone", which means intuitive, trading, resulting in a consistent success.

Now, why have we liked this book and why do we recommend reading it? The following points sum up the positive sides of Mark's book:

Although Trading in the Zone is a great book, there is one big striking flaw and a few minor ones that spoil the overall impression a bit:

Please don't let the number of disadvantages stop you from acquainting yourself closer with the ideas presented by Mark Douglas. The book is really good and you won't regret reading it.

If you have any questions, comments, or opinion about Trading in the Zone by Mark Douglas, feel free to share them on our Forex forum.