Partial Profit Taking in Forex — Does It Work?

"Cut your losses short and let your profits run."
— Proverb

When a Forex traders decides to open a position, usually he has some profit target in mind. Often such target is set as a  order for the position. Sometimes, traders set multiple profit targets for one position and close it partially with every profit target reached. It's called partial profit taking or half profit targets and is widely used by traders.

So is the partial profit taking a viable Forex trading technique? Does it improve the overall trading record? Does it provide any other advantages to the trader? You'll find different opinions on this matter in trading related sources. Some successful traders promote this method, while others call it dangerous (Van K. Tharp does so in his Trade Your Way to Financial Freedom on p. 265, Chapter 10 — How to Take Profits — What to Avoid). In this article I will try to demonstrate the actual difference in the impact on the account's end balance when using partial profit taking compared to conventional profit taking.

For our first model let's look at the random walk market, i.e. the one where the price changes are completely random and there's an equal probability for going up and down at any given moment. That means that our trading strategy doesn't have an edge — it can't have an edge in a completely random market. The trading scenario for conventional profit taking and for half profit targets with an  trading system is demonstrated below: 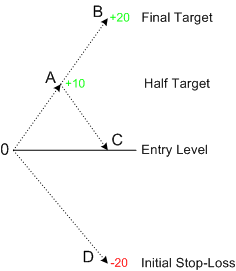 Position is open at entry level and, obviously, has 0 profit at that level. If our trading system has no edge, there's the same chance for going up as for going down. That means that if we use simple profit taking (with one target), we have 0.5 probability of reaching point B (20 pips profit) and 0.5 probability of reaching point D (20 pips loss), resulting in the trade expectancy of $0.00 (). Now, if we use the partial profit taking with one half profit target, we have the following probabilities at play:

So does it has any advantages or disadvantages with the  trading systems? Only the minor ones. Partial profit taking helps to smooth the account balance curve volatility. It also has higher execution risks because it involves more trades per position. Additionally, it's providing a sense of psychological comfort to a trader, who is now making more profitable trades, albeit at a cost of decreasing their average size.

Now, let's get back to the real world, where traders assume that their Forex trading systems have some sort of an edge compared to entering the market blindly. For our second model to be more demonstrative, let's assume that our system has a really nice edge over the market — the price at our entry point has a double chance of going in our direction compared to that of going in the opposite direction. So how does our trade expectancies fare with two different profit taking methods? Considering the same chart as above, we have the following trade expectancy for a single profit target method: $6.66 (). As for the partial profit taking technique, we have the following probabilities:

It turns out that when we use this method of profit taking with a  entry system, the minor differences are accompanied by a huge disadvantage for a trader — decreased trade expectancy.

According to the above calculations, the bigger is the edge of your Forex trading system, the bigger is the advantage of the conventional single profit target method over the partial profit taking method. That means that the former should be used only if you don't believe that your market entry system can fare better than if you'd be trading completely randomly. Even then, the partial profit taking system offers no significant advantage compared with the common single method.

If you have your own opinion on this topic or would like to ask a question about partial profit taking in Forex, feel free to visit our Forex forum.