MACD Divergence Forex trading strategy — is one of the quite reliable systems and is based on the standard MACD indicator. Actually, the divergence between MACD line and the currency pair rate is the basic signal in this strategy. This system has rather fuzzy entry and exit points, but it's easy to spot the signal and the trades can be rather profitable, as it helps to catch the pull-backs and the trend reversals.

If the system generates a reversal signal — close the previous position first. 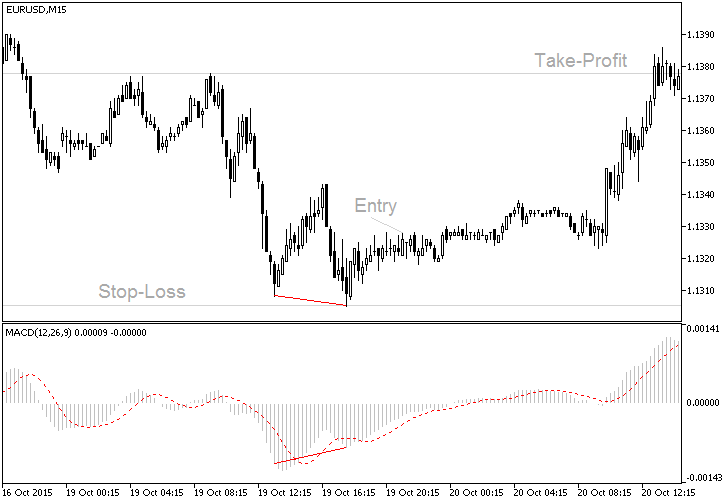 The example chart is EUR/USD currency pair at M15 timeframe. As seen on the chart, the price line was declining in a bearish trend, while the MACD indicator was rising in a bullish trend during rather long period. The entry point is marked at the level, where it's became clear that the downtrend is over on the currency pair chart. Stop-loss was set to the support level formed by the double-bottom chart pattern, while the take-profit level was set to the level of resistance formed by bearish trend's short-lived pull-backs. The TP/SL ratio is rather good here — about 1.5.

Do you have any suggestions or questions regarding this strategy? You can always discuss MACD Divergence Strategy with the fellow Forex traders on the Trading Systems and Strategies forum.