Risk of Ruin in Trading

Every Forex trader wants to know how risky their strategy is and what is the chance to lose a part of the account or the entire balance. This chance is called the risk of ruin. Since usually Forex traders know their win/loss ratio and the average size of their winning and losing positions, calculating the risk of ruin should be relatively easy. Or should it? Unfortunately, it isn't that simple.

The risk of ruin is a known problem in probability theory and, to some extent, it can be solved using the laws and formulas of this theory. Assessing the risk of ruin in Forex is a very complex task that requires a lot of research and calculating powers in exponential dependence on the desired level of accuracy.

The most popular ways to calculate the risk of ruin of a Forex strategy are two static formulas for the fixed position size and fixed fractional position sizing employed currently by many Forex social networks (e.g., FXSTAT, Myfxbook, and others). The formulas were presented by D.R. Cox and H.D. Miller in The Theory of Stochastic Processes and are publicly available in various sources (e.g., Minimizing Your Risk of Ruin by David E. Chamness in the August 2009 issue of the Futures Magazine). They may seem very complex at a first glance, but you can actually compute them using a calculator or an Excel spreadsheet.

Fixed position size condition suggests that the Forex trader won't be increasing or decreasing position size with new wins or losses. For example, if one starts with $10,000 account balance and 1 standard lot per position, dropping to $1,000 balance or advancing to $50,000 balance won't change that 1 lot position volume. The probability to lose a part of balance is exponentially proportional to the standard deviation of the account and is inversely exponentially proportional to the size of this part and the average return per trade. The formula for the risk of ruin is the following:

The risk to lose 10% of the account balance, considering a 2% mean return on a position and a standard deviation of 7%:

The risk of complete ruin (100% of the account balance), considering a 1.5% mean return on a position and a standard deviation of 1%:

It is easy to notice that this formula calculates the risk of ruin for the infinite number of trades. According to it, the risk of loss will always be 100% for the system that currently shows negative trade expectancy and will always be close enough (but not equal) to 0 for the high enough mean return and low enough standard deviation of returns.

Unlike the fixed position size model, fixed fractional position sizing implies that a trader is risking a fixed fraction of his account per trade (for example, 1%; the actual value doesn't really matter here), so the profit is proportional to the account size and the loss is inversely proportional to it. As with the fixed position size, the probability to lose a part of the balance is still inversely exponentially proportional to the size of this part. The dependence of the risk on the standard deviation is still positive, and on the size of the part, it is still negative, but its nature becomes more complex. The formula for the risk calculation is the following:

Below are two examples of the risk of ruin calculation using the fixed fractional position sizing model with the same conditions as for the fixed position size examples above:

Obviously, it is only slightly lower than 44.2% of the fixed position size model.

Since using 100% part of the account balance for the formula would imply that Z = 1, there would be an error in natural logarithm calculation (natural logarithm of 0 is not defined, but it is an infinitely large negative number). This means that it is impossible to lose the whole account if the strategy has a positive rate of returns and a fixed fractional position sizing is used:

Evidently, this formula shows a smaller risk because it assumes a fractional position sizing, which reduces the position size in case of losses, thus reducing the further losses and so on.

The most intuitive method to calculate risk of loss turns out to be the most difficult one in terms of the actual computations involved. The Forex risk of ruin problem can be defined as a particular case of the gambler's ruin problem, where a trader (player), starting with an initial account balance (stake), has a certain probability to win a given average profit amount and a different (or, sometimes, the same) probability to lose a given average loss amount. The trader is competing against the market (an infinitely rich adversary) — so, only the trader can get the account balance ruined; winning condition may be defined as reaching some target balance higher than the starting one.

More background research for the simple formulas of risk of loss calculation using this method can be found in the Chapter 12 of the Introduction to Probability by Charles M. Grinstead and J. Laurie Snell.

In case when the average profit equals the average loss and the probability to lose equals the probability to win, the task of calculation the exact risk of ruin is extremely simple. The starting balance is denoted as z and the target balance is denoted as M. The risk of ruining the account before going from z to M then would be:

The probability to win (p) — is a chance to win (end up with profit) one position. It would be very interesting if traders could know their exact probabilities to win a particular trade, but instead the win/loss ratios are to be used here. The number of profitable trades divided by the total number of trades will be used as the probability to win. It is safe to include positions here, since it will be compensated by the average win size, it is just necessary to remember to count such positions when calculating it.

The probability to lose (q) — is a chance to lose (end up with a loss) one position. For the same reasons as above, a plain win/loss ratio is the best estimate that can be used here. q = Number of losing trades / Total number of trades. Obviously, if zero profit positions were counted in the calculation of p, they aren't to be included here. 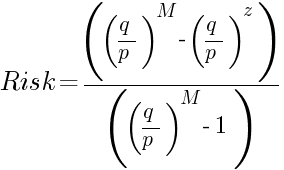 Evidently, an edge of 5% gives a Forex trader an enormous improvement in reliability of the whole trading system.

In reality, a Forex trading strategy rarely operates with an average profit that is equal average loss. The difference in the outcomes of winning and losing positions leads to a much greater complexity in the risk of ruin calculation. It is pointless to lay out the whole algorithm of calculation in details for this case here. Instead, it is better to provide an overview of the necessary steps, which can be easily reduced to trivial math/coding problems.

The detailed information on the mathematics of the risk of ruin calculation for the general case (different win/loss size and probabilities) can be found in Kevin Brown's article The Gambler's Ruin. It is a superb work that provides an excellent explanation of this problem and the ways of solving it.

In general, the formula for probability of ruining the whole account before reaching a target balance can be written as follows:

In the above example, the matrix M would look like this: 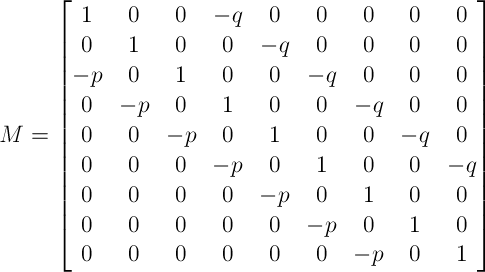 And if populated with values:

While matrix/vector multiplication is trivial, inverting a matrix bigger than is not. The easiest way to find the inverse matrix M-1 using a computer is . Using the matrix L, it is possible to solve Ly = I to find y and then to use the matrix U to solve Ux = y to find x, which would be M-1. Multiplying three matrices of the upper part and the three of the lower part of the general formula for probability of ruin is then trivial.

The example case is pretty simple, the matrix is only 9×9 — its inverse can be calculated pretty fast without any optimization. But what if the GCD of the strategy is $1? For example, if the average loss is $1,113 and the average profit is $1,109, the GCD is $1. With $2,500 starting balance and $5,000 target, that is a matrix — this will require a lot of computer memory and time to calculate. The best time of computing this risk of ruin without any optimization is O(k2.376) and in general it requires at least memory.

Firstly, it is important to keep the M-1 matrix as small as possible. Optimally, k should be less than 500, if the aim is to solve this problem in reasonable time (several seconds).

Here is the example PHP code that uses the above algorithm to find the risk of ruin for the earlier example:

The output would be:

So, the risk to ruin the entire account before doubling it is about 25.8% for this example.

But what if k is getting too big? In this case, mathematical rounding should be applied to the loss step, win step, and both starting and target balances, virtually truncating some of the last digits. Additionally, the target balance can be reduced. The first method influences the accuracy, but its effect becomes less important as the difference between the average loss and the average profit gets bigger.

None of the described methods is perfect. Each of them should only be used when it fits the parameters of the Forex trading strategy:

Whichever method you choose, it is important to remember that the resulting risk value shouldn't be taken too seriously on its own. Its main purpose is in comparing different strategies or the effect of the changes applied to one trading strategy. Relying on the calculated risk value as the real measure of strategy riskiness can lead to unexpected but horrible consequences.

Note: it is possible to calculate all three types of risk of ruin by using the Forex Report Analysis Tool. Perhaps, the only free online tool that offers such functionality.

If you have any questions or commentaries regarding the assessment of the risk of ruin in Forex trading, please feel free to discuss them on our forum.