The peculiar behavior of currency pairs around Christmas time has always captured traders' attention. Many traders believe that the Forex liquidity on Christmas Eve is very thin, and it is not recommended to trade in such an environment at all. Let's see if this preconception holds. 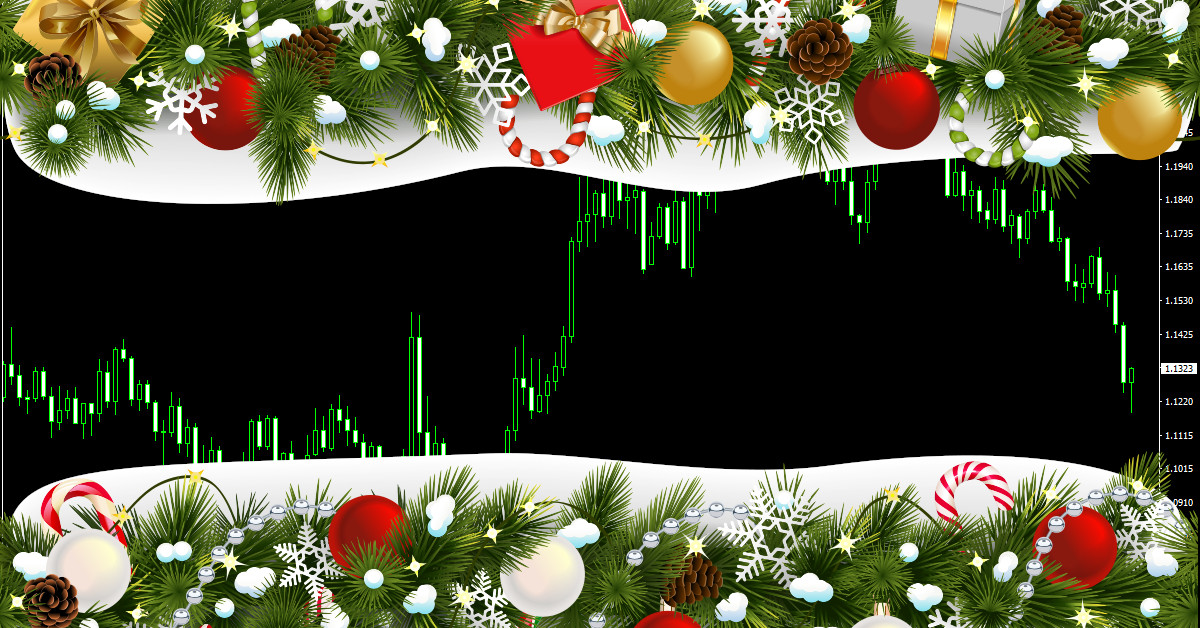 The present analysis looks at the market behavior of seven major currency pairs (EUR/USD, USD/JPY, GBP/USD, AUD/USD, USD/CAD, USD/CHF, and NZD/USD) on their Christmas Eve (December 24) trading sessions on the period from 1999 through 2020. It encompasses 16 trading sessions, not 21 because some of the dates fell on Saturday or Sunday and were complete days off on Forex. The Christmas Eve statistics are then compared to the average daily values across the entire period (1999–2020).

Before proceeding to the analysis of each currency pair, let us discuss the data and metrics it is based on.

The OHLC data used in calculations is derived from the Alpari MetaTrader 4 platform and is based on GMT+2 time zone — the one that has Friday Close at midnight and opens on Monday at 00:00 — so that there are no Saturday or Sunday sessions.

Daily change data is calculated using the previous day's Close vs. December 24 Close. Both signed change and absolute changes are calculated — the former is useful to understand if there was any directional bias, and the latter is useful for calculating the average value. The daily range is calculated as High minus Low. Both daily change and daily range values are plotted on charts using pips values, while the comparison to all trading sessions and other currency pairs is done using percentage values.

The updated analysis also includes additional information — a comparison between the direction of the currency pair's moves on December 24 with the day before Christmas Eve and the day after Christmas. If those days fell on a weekend, the closest business days were used. The information is going to be useful to traders as it shows whether there is a correlation between the direction of movement of currency pairs on Christmas Eve and the days immediately before and after. 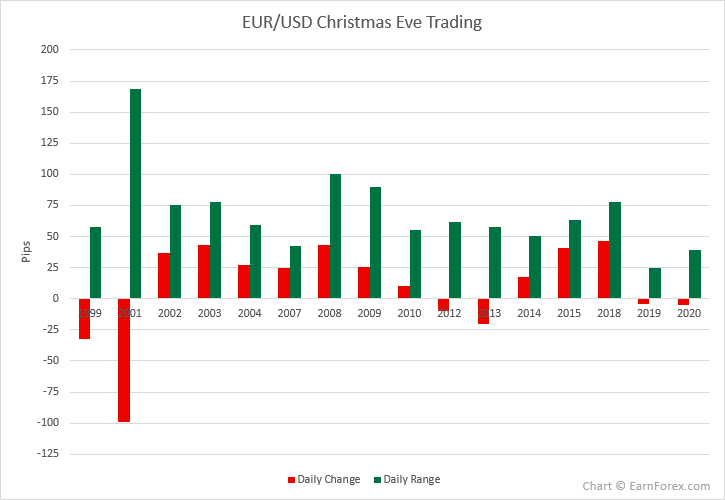 The table summarizes the data obtained from EUR/USD Christmas Eve trading sessions. Comparison to averages suggests that both average daily change and range are about of a norm, signaling lower volatility and profit potential. A slight bullish bias (average change of +9 pips) — compared to overall bearish change since Christmas 1999 — signals some predisposition of the euro to rise on this particular day of the year.

The Christmas chart for USD/JPY suggests lower volatility and rate of change in the periods between the crises. That was especially evident during the past two years. 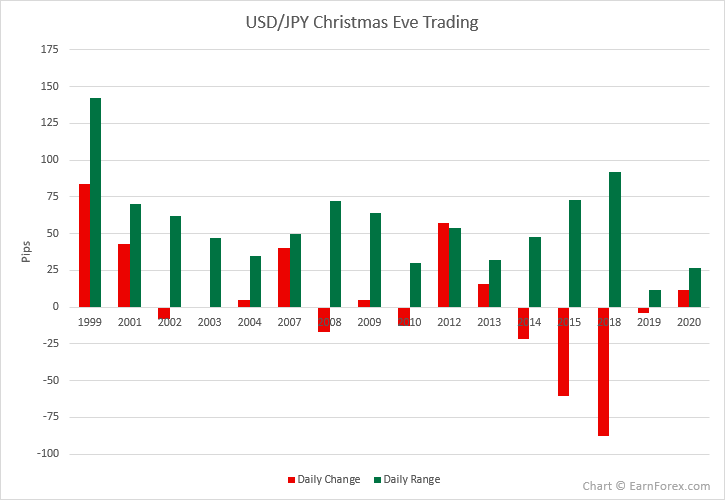 You can see that the daily volatility is even more subdued in USD/JPY on Christmas trading than it is in EUR/USD. At the same time, the daily change is the same. An exceedingly small upward bias (+3 pips on average) is negligible. 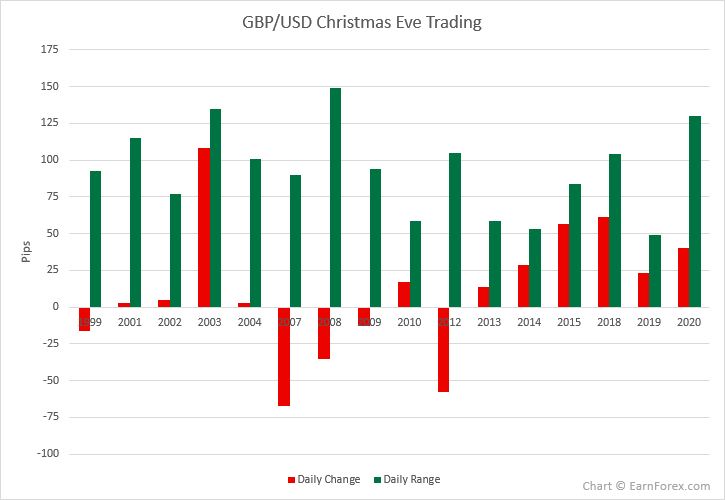 The average daily change on Christmas Eve is about half of that of a regular day. The difference between the average daily range on Christmas Eve and a regular day is somewhat smaller compared to EUR/USD. The pair's bullish bias for the holiday session (average change of +11 pips) might seem insignificant, but it is important to remember that GBP/USD lost almost 25% of its value during the entire reviewed period.

GBP/USD moved on Christmas Eve 10 times in the same direction as the day prior and 6 times as the day after.

Christmas volatility seems to be calming down for AUD/USD since its peak during the 2009 trading. The chart also draws a rather bullish picture for the currency pair.

The overall volatility and average daily change are significantly higher for AUD/USD in percentage terms if we compare it to the previous three currency pairs. The dominance, albeit less pronounced, remains on Christmas Eve sessions too. Yet, holiday trading is about twice weaker than all other sessions on average. The +15 pips of average gain on Christmas sessions for AUD/USD look significant, however, it should be noted that the Forex pair rose somewhat if we compare 2020 to 1999.

Among the top 5 major currency pairs, the chart for Christmas Eve sessions in USD/CAD demonstrates the most apparent drop in average volatility and daily change from 1999 through 2020. 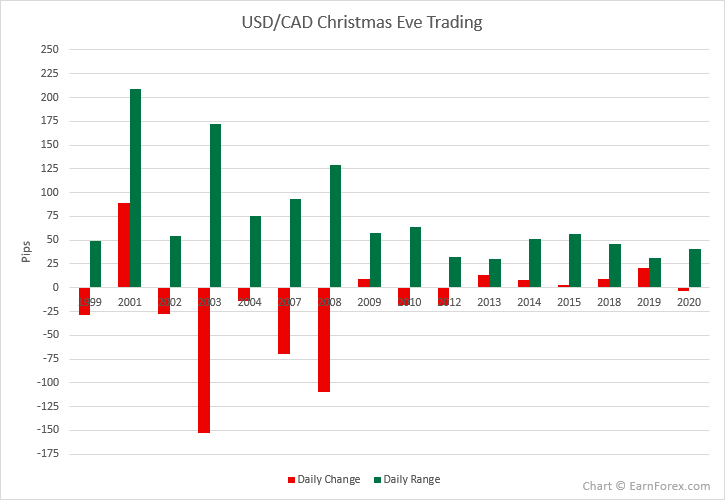 From the table above we can understand that USD/CAD is the currency pair that is least bothered by Christmas Eve compared to its normal trading period. It also loses in volatility and average daily change to the top four majors. Its average daily decline of -18 pips for Christmas sessions is significant but corresponds well to the overall bearish bias in USD/CAD from 1999 through 2020.

The chart of USD/CHF Christmas Eve daily changes and daily ranges provides us with two conclusions. First, 2001 was a clear outlier, which unfortunately spoils the average data for the pair; this is something to bear in mind. Second, the pair's volatility is in a decline with a sort of a revival from 2014 onwards, though it has pulled back a bit in the past two years. 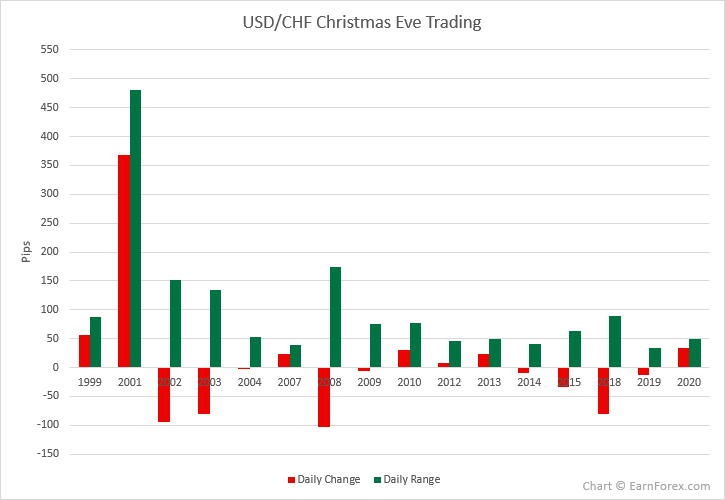 USD/CHF is the only currency pair of the ones we studied here that demonstrates the same level of the average daily change on Christmas Eve sessions as on all days in total. Obviously, the year 2001 outlier seen on the chart above is to blame here. On top of that, the daily volatility numbers suggest that the currency pair is normally rather volatile and remains such during Christmas trading. The bullish bias suggested by the average gain of +8 pips disappears if we ignore the 2001 Christmas session.

The USD/CHF did not buck the trend in terms of its movement, moving in the same direction as the day immediately before Christmas Eve in 7 instances and the day after in 8 instances.

The chart for NZD/USD sessions resembles that of AUD/USD a little. There is no noticeable decline in volatility — there is just a peak during the global financial crisis of 2008. That year could be called an outlier, but it is not too different from the rest of the Christmas Eve sessions plotted here. 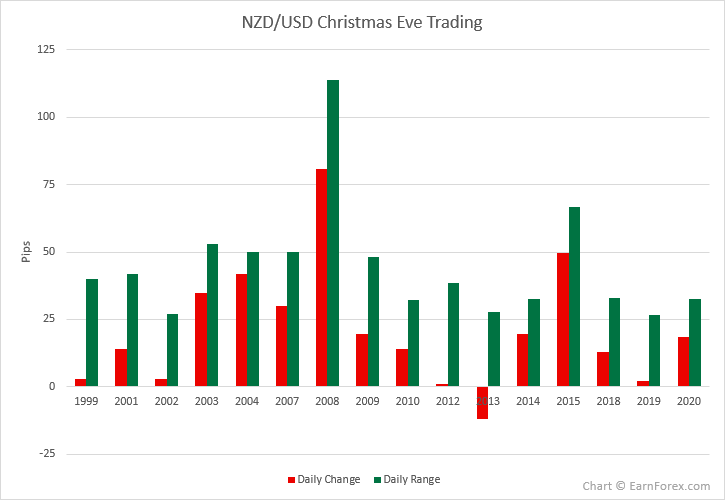 According to the table above, NZD/USD is the currency pair in percentage points outside the Christmas Eve sessions and the most volatile one inside if we do not count the outlier of 2001 in USD/CHF. A bullish bias (+21 pips) would be significant if NZD/USD was not in a bullish trend in 1998–2018 overall.

Although the seven major currency pairs we study in this post demonstrate different patterns in their Christmas Eve price action, there are four important conclusions we can come to with the obtained results:

If you want to share your opinion, observations, conclusions, or to simply ask some questions regarding trading on Christmas Eve, feel free to do so on our Forex forum.