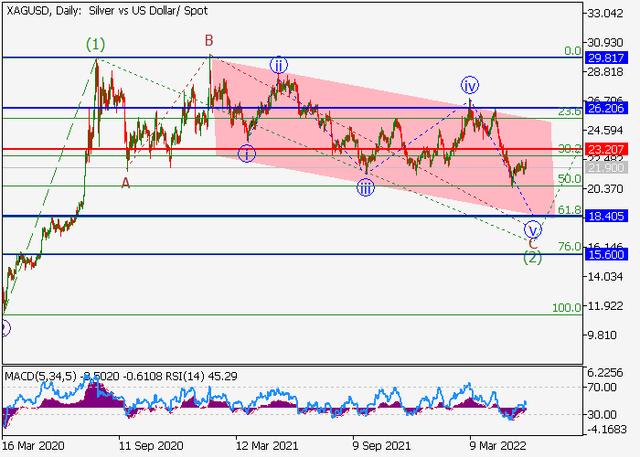 Silver is trying to recover its positions​

Silver prices are moderately declining during the morning session, again testing 22 for a breakdown. The day before, the instrument made another attempt to grow, reacting to a corrective decline in the yield of US Treasury bonds, which retreated from their previous highs at 3.038% to 2.979%.

At the same time, trading participants are in no hurry to open new trading positions for the instrument, preferring to wait for the decisions of major global financial regulators on monetary policy issues. In particular, a meeting of the European Central Bank (ECB) will be held this week, at which, as expected, the regulator may announce the start of a quantitative tightening program, and next week the key issues will be discussed by the US Federal Reserve and the Bank of England, from which the market expects a "hawkish" rhetoric. In turn, the Bank of Japan, judging by the recent comments of its Governor Haruhiko Kuroda, will maintain a soft position.

Moderate demand for silver is also supported by the gradual recovery of industrial activity in China. However, the situation is ambiguous here, as growth in Asia may be offset by a noticeable drop in industrial activity in Europe, where supply chain disruption, high inflation and rising energy prices are causing many factories to stop working. Disruptions are especially noticeable in high-tech areas, where the use of silver as a raw material has always occupied a fairly high percentage.

Although the number of positions in gold for the last week began to gradually increase, the statistics for silver remains at the levels of the previous week. According to the latest report from the US Commodity Futures Trading Commission (CFTC), the advantage in open positions remains in favor of sellers (37.877K positions), while buyers have only 7.797K open contracts. In addition, last week, buyers liquidated 0.926K positions, while sellers, on the contrary increased their number by 0.997K. 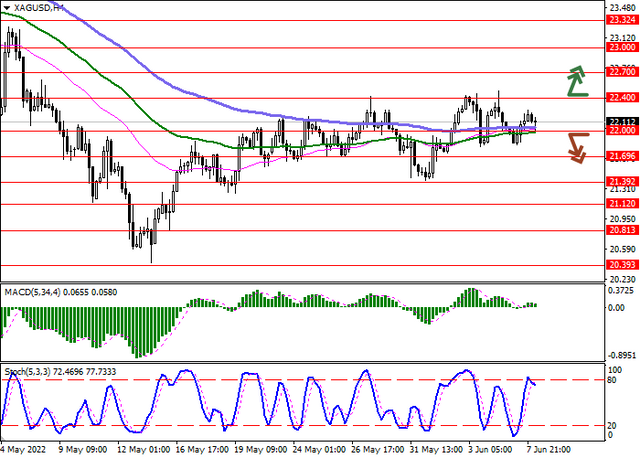 On the D1 chart, Bollinger Bands are gradually reversing horizontally. The price range is slightly narrowed from below, being spacious enough for the current activity level in the market. MACD is growing preserving a weak buy signal (located above the signal line). Stochastic, having not reached its boundary level of "80", reversed into a horizontal plane, reacting to the emergence of "bearish" trend during the Asian session. 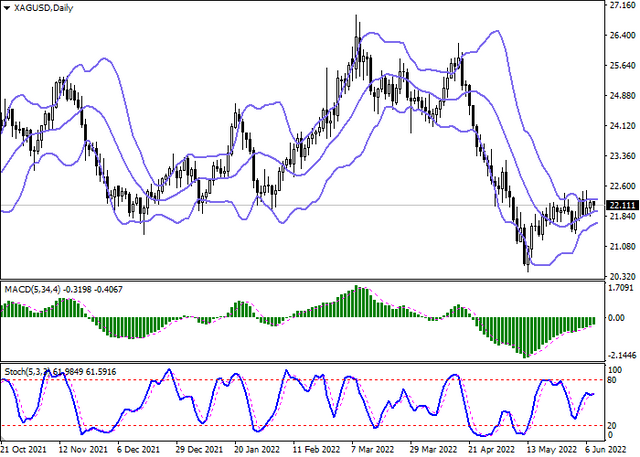 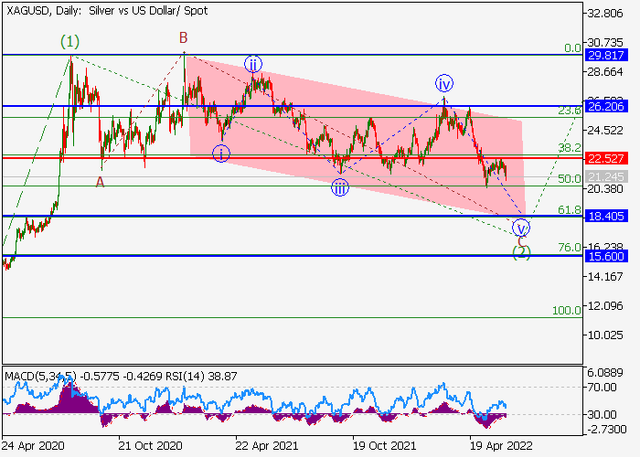 Silver - The pair may fall.​ 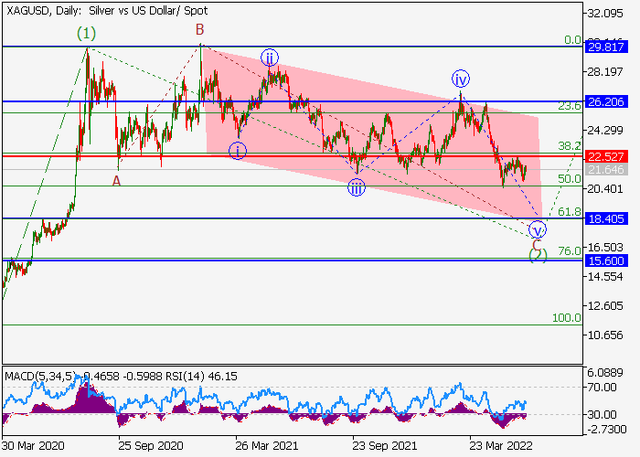 D1
On the daily chart, the price reversed at 21.95 (correction 23.6%) and continues to decline along the downward "fan," the targets of which may be the levels 20.60 (correction 0.0%) and 18.95 (extension 61.8%). The key "bullish" level is 21.95, supported by the middle line of Bollinger bands, and if it is broken, the asset will rise to 22.80 (correction 38.2%), 23.50 (correction 50.0%), but this option of movement is seen as less likely, as the indicators point to the continuation of the downtrend: Bollinger bands and Stochastic reverse downwards, and the MACD histogram is stable in the negative zone. 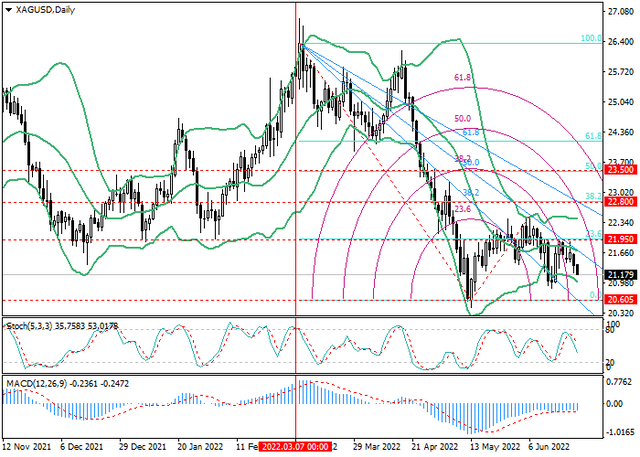 W1
On the weekly chart, the trading instrument overcame 22.30 (correction 38.2%), which allows it to fall to 20.45 (correction 50.0%) and 18.60 (correction 61.8%). In case of a reverse breakout of 22.30, positive dynamics may develop to 23.50 (middle line of Bollinger bands) and 24.60 (correction 23.6%). Technical indicators point to continued decline: Bollinger bands and Stochastic reverse downwards, while the MACD histogram is increasing in the negative zone. 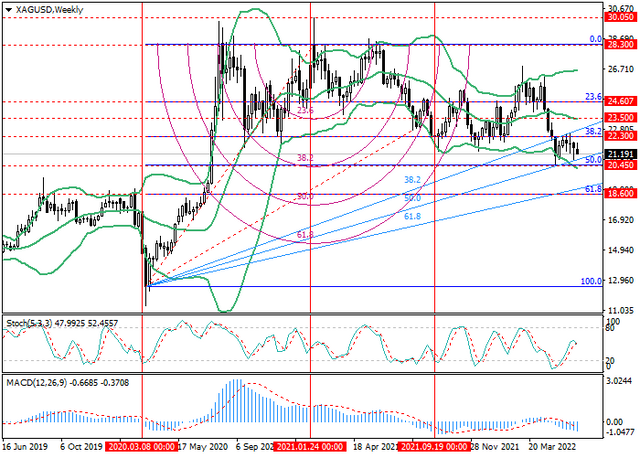 The asset is under pressure due to the strengthening of the US currency in anticipation of the next speech by US Federal Reserve Chairman Jerome Powell, whose rhetoric is likely to favor further tightening monetary policy during the July meeting. As before, the markets do not analyze the very fact of the rate increase but the pace of this growth and the evaluation of the effectiveness of the steps taken earlier. Meanwhile, the Bank for International Settlements (BIS) has called for a more "hawkish" stance from leading financial regulators, despite the risks of a slowdown in macroeconomic indicators: if measures are not taken promptly, this could lead to general stagflation. However, the current rate adjustment in the world's major economies is 1% to 6% below the historical range and is similar to what was recorded in the 1970s, according to a document published by the BIS.

The trading instrument is slightly supported by a corrective decline in the yield of 10-year US Treasury bonds, which on Wednesday morning corrected from 3.207% to 3.172%, as well as inflationary risks in the world's leading economies: for example, in May, price growth in the US accelerated to 8.6%, which is the highest since 1981. Another positive factor for silver is the increase in industrial activity in China, which is gradually increasing the volume of imports and is recovering from the downtime of factories closed for quarantine. Yesterday, Chinese media noted that no new COVID-19 cases were reported in Beijing and Shanghai on Monday for the first time since February 19. 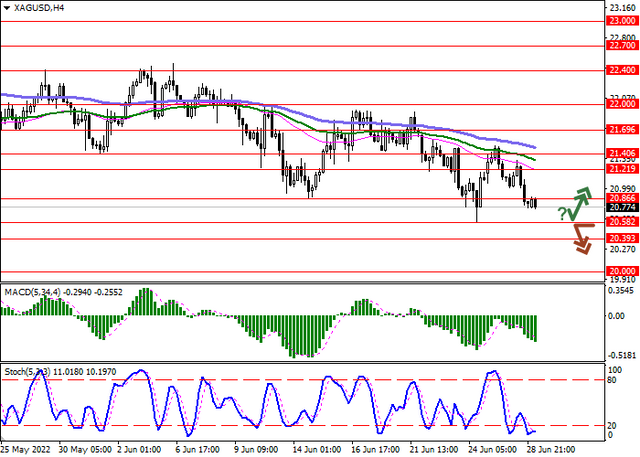 On the daily chart, Bollinger Bands are steadily declining: the price range is expanding from below, letting the "bears" renew local lows. The MACD indicator is falling, keeping a relatively strong sell signal (the histogram is below the signal line). Stochastic, having made an unsuccessful attempt to reverse upwards at the end of last week, returned to the decline again, indicating that the instrument may become oversold in the ultra-short term. 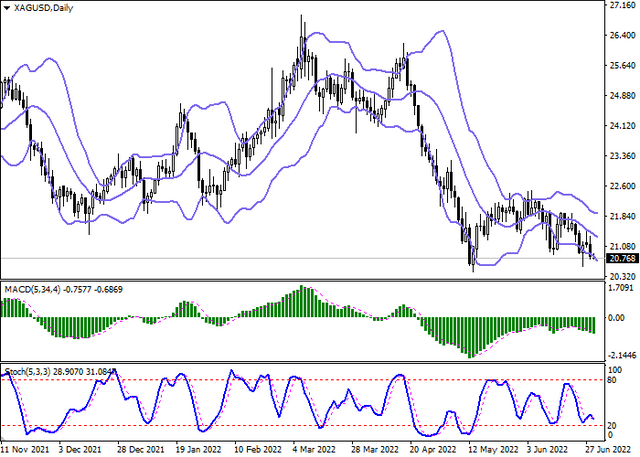