In technical analysis, moving averages are mathematically derived indices that play a fundamental role as effective momentum indicators, helping the trader spotting and confirming a newly started trend in any given currency pair.

The Simple Moving Average (SMA), also known as '', is simply the average of the bid prices in the last n candlesticks. The parameter n is configurable: when it is set to a big number, let's say over 20, the line tends to change quite slowly: this has the advantage of spotting well the overall trend but does not keep much into consideration the most recent data.

Conversely, when the parameter n is below, say 10, changes in the index become quite fast, which makes it predict and confirm future trends earlier, but also with less reliability with respect to the last example.

The exponential moving average (EMA) is an index very similar to SMA, but with the advantage of keeping in greater consideration the most recent candlesticks, applying weighting factors that decrease exponentially. See the picture below: 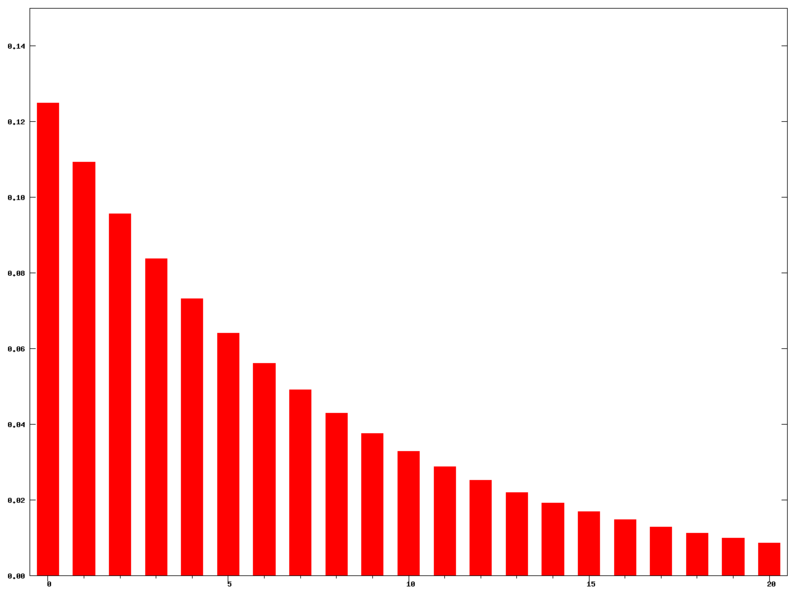 In the graph, the X axis represents the distance in time (0 is the present), while the Y axis is the weighting.

Of course, since the formula to calculate this average will be something like:

with a parameter ∝ below 1, you can decide how much the exponential is "compressed" by controlling both this parameter and n, which has the same role here as in the simple moving average.

If you are not too good at maths, do not worry about this last paragraph as long as you got the meaning behind the previous graph. What really matters is to understand that EMA is highly influenced by the latest candlestick values, which makes this index subject to rapid changes in direction, allowing you to spot new trends early (but with a high percentage of false positives).

A weighted moving average is simply an average whose weights are calculated in an arbitrary way which is not that of SMA or EMA. There are no rules as to how the values can be assigned, although it is always very important to know (at least roughly) what such weights are if you want to use this kind of index, in order to understand its actual meaning.

One of the most interesting things that can be done with moving averages is to combine two averages of different kinds, usually with a different parameter n too. For instance, you can build what is commonly referred to as a  moving average crossover by using two indices, an EMA and a SMA, and decide to open or close a trade whenever the two cross.

It is very important to experiment different parameters and candlestick graphs until you think you have found the setting that feels best for you. You can find out common EMA and SMA settings with a quick Google search, but always remember that they need to be right for your specific trading conditions.