The History and Future of Cent Accounts

Born from a rather obscure flaw of the MetaTrader platform, cent accounts quickly became a popular feature and remain a permanent offer from a significant part of brokers. Despite low profit potential for the brokerage companies and the existence of better alternatives in  trading software, accounts show resilience even today. 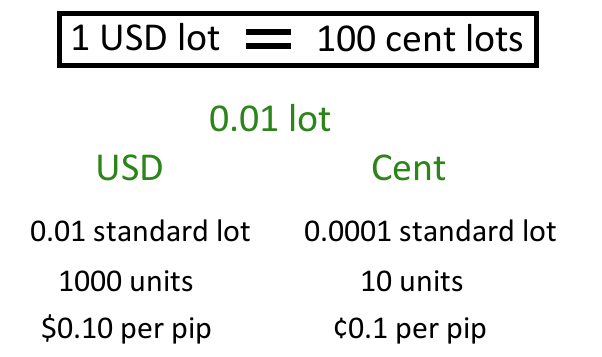 Trading accounts denominated in cents are handled the same way as normal USD or EUR accounts. The only difference is that upon depositing or withdrawing, the account holder pays or receives 100 times less money than usually. When trading on a cent account, 1 standard lot's size, which is normally 100,000 currency units, becomes just 10,000 units. Respectively, the effective profit or loss from a 1 lot trade is also reduced proportionally. The margin requirements are also lower for 1 standard lot in cents than for 1 standard lot in a normal USD account. However, that difference is not seen when a trader is operating the account. Actually, there is almost no way to tell the difference between a cent and USD account from within the trading platform. For example, in the following EXNESS cent account view, the only sign of it not being a dollar account is the displayed balance currency — USC instead of USD — other information looks the same as if it were a $100 live Forex account:

With a normal USD account, a trader is limited to 0.01 standard lot as the absolute minimum trade size in MetaTrader platform (MT4 and MT5 are the same in this regard for Forex instruments, but MT5 allows smaller position sizes in cryptocurrency trading). Consequently, a trader can operate with as little as 0.0001 standard lot in a cent account, which otherwise would be impossible in MetaTrader. The following two screenshots illustrate the limitation. Notice that the Buy and Sell buttons are active when 0.01 size is selected: 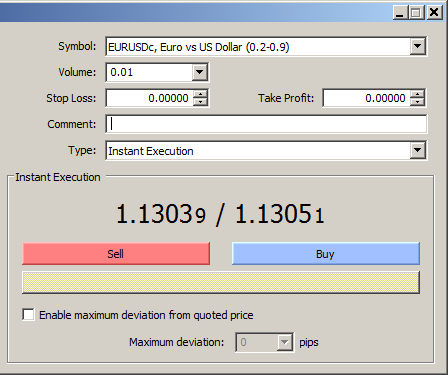 Switching the order volume to 0.001 disables the Buy and Sell buttons: 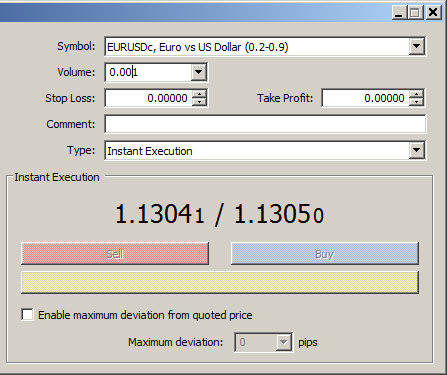 In both cases, it is a cent account. The first screenshot implies a 0.01 cent lot position, which is the same as 0.0001 standard lot position. The second one tries to go down to 0.00001 of a standard lot, which is the smallest tradable amount in the current retail Forex market — 1 unit of currency. Unfortunately, it is still off limits even for cent MetaTrader accounts.

The history of cent accounts in the online Forex trading industry was very slow at start but gained traction during its late stage when the number of MetaTrader brokers skyrocketed:

After that, cent accounts had entered mainstream and soon have reached their current rather high level of popularity.

Getting opportunity to decrease the minimum available position size to 0.0001 of a standard lot is the biggest advantage of a cent account. While such brokers as AGEA and OANDA make it possible to trade with 0.00001 lot (1 currency unit) with their proprietary platforms, getting below the 0.01 lot size is impossible in MetaTrader platform without resorting to using a cent account. Other advantages are derived from this one:

The greatest disadvantage of cent accounts is hidden in the fact that the majority of Forex brokers offering such a service limit the maximum account and position size to keep the usage down to a minimum. It is seen as a nice way to promote a business, but companies prefer to make money with live mini or standard accounts. Generally, traders will see the following drawbacks in using the cent accounts:

About 10% of all the 258 Forex brokers listed on our website are providing cent accounts in one form or another. Obviously, the noticeable advantages of such accounts outweigh their less significant disadvantages for many beginning traders. For as long as brokers will be interested in getting new traders with smaller balances to join them, companies will continue offering cent accounts. At least until MetaQuotes releases a version of MetaTrader that allows trades of any size.

If you have any further insights on how cent accounts first appeared in Forex or if you want to share your experience trading via such an account, you can use our forum to discuss cent accounts with other traders.