Euro rose in European trade against dollar for third straight session, hitting six-month highs and on track for the second weekly profit in a row as concerns about the widening policy gap between Europe and the US fades away. Dollar is extending its heavy losses against a basket of major rivals following recent remarks by Fed Chair Jerome Powell, at which he hinted strongly at only a 0.5% rate hike in December.

Investors await important official US payrolls data later today for November, which will provide fresh clues on growth. EURUSD rose over 0.2% to 1.0542, the highest since June, with a session-low at 1.0504, and the largest profit since November 11.​

EURCHF attempts to resume the rise

The EURCHF pair succeeded to provide new positive close above the moving average 55 at 0.9845, to confirm its surrender to the domination of the suggested bullish bias and approach the first target at 0.99. Note that stochastic continuous positive momentum will provide additional chance to record additional gains that might extend towards 0.9935 followed by 1.0 in the medium term period. 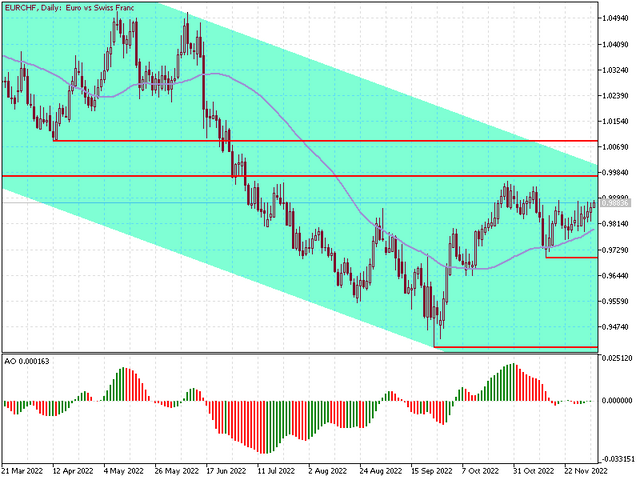 EURJPY fluctuates within the bearish track

The EURJPY pair touched 140.75 level on last Friday, to rebound positively towards 42.20 and settles near the moving average 55, these factors won’t affect the bearish track by settling below 142.60 resistance line, to confirm confining trades within the negative track and wait to renew the negative attack to target the first main target at 140.25. On the other hand, breaching the mentioned resistance will confirm regaining the bullish bias by consolidating within the bullish channel again, allowing us to start suggesting the bullish trades and target 143.15 initially. 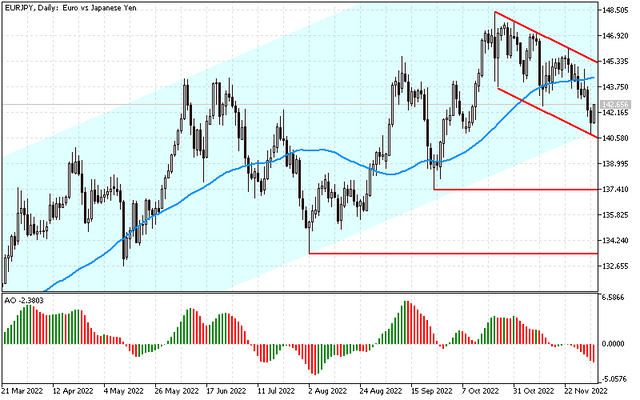 The EURUSD pair ended last Friday above 1.0515 level after the mixed trades that it witnessed in the previous sessions, starting today with new bullish bias to resume the main bullish trend, approaching our first waited target at 1.0600, waiting for more rise to visit 1.0750 as a next main target. Therefore, the bullish trend scenario will remain valid and active for the upcoming period, supported by the EMA50, noting that it is important to hold above 1.0515 to continue the expected rise.

The GBPUSD pair shows some bearish bias now to move below 1.2300, to achieve some temporary bearish correction, waiting to get positive motive that assists to push the price to resume the expected bullish trend for today, which depends on the price stability above 1.2130, reminding you that our next main target reaches 1.2465. 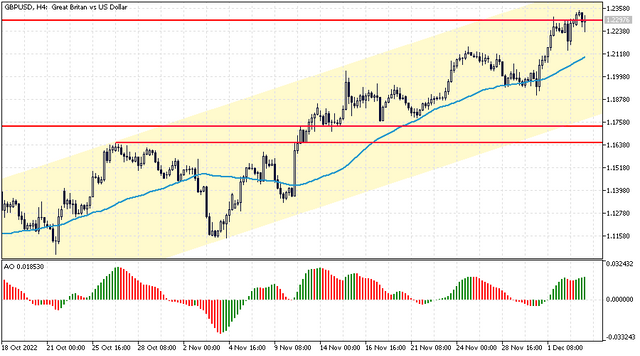 The USDJPY pair succeeded to achieve our first extended target at 133.90 and settles near it now, and we suggest resuming the negative trades in the upcoming sessions supported by the negative pressure coming by the EMA50, reminding you that our next target is located at 132.75, which breaking it represents the key to head towards the previously recorded low at 131.72. 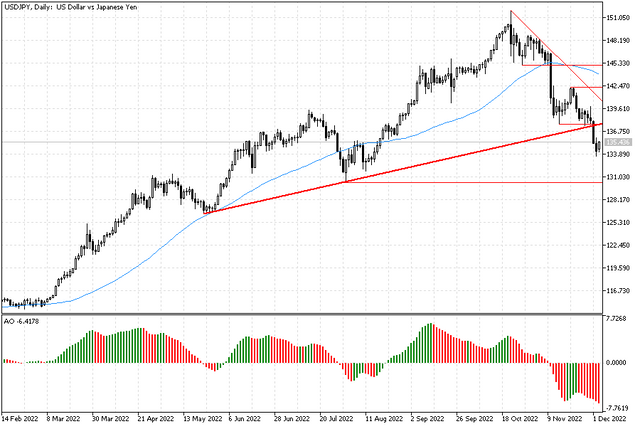 USDCAD pair traded with strong positivity yesterday to breach 1.3500 and settles near 1.3600 barrier, to head towards achieving more expected gains in the upcoming sessions, on its ways to visit 1.3680 as a next main target. The EMA50 supports the expected rise, which will remain valid as long as 1.3500 level remains intact. On the daily chart, the trading instrument moves above the resistance line of the downward channel, approaching it from above for reverse testing, and the technical indicators maintain a stable buy signal, ignoring a possible local correction. 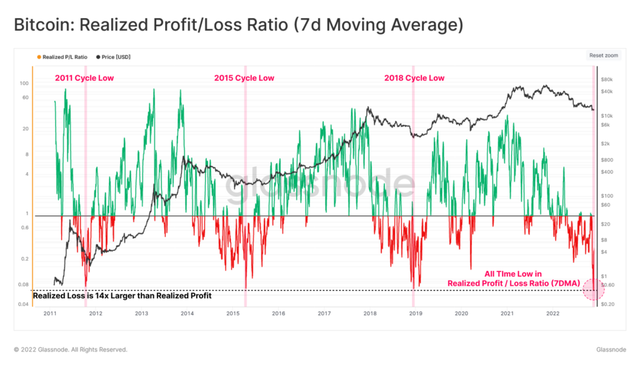 The average of realized losses was at new historical peaks at 0.60, indicating a progressive, unprecedented sell-off in the cryptocurrency market. Historically, these levels have proven to be opportunities for accumulation and heralded an impending rally by cryptocurrency bulls. The level of losses realized by the market since 2011 has become 14 times the level of realized gains. We also see a preserved '4-year cyclicality' in relation to the previous 'cryptocurrency winters' of 2011, 2015 and 2018. 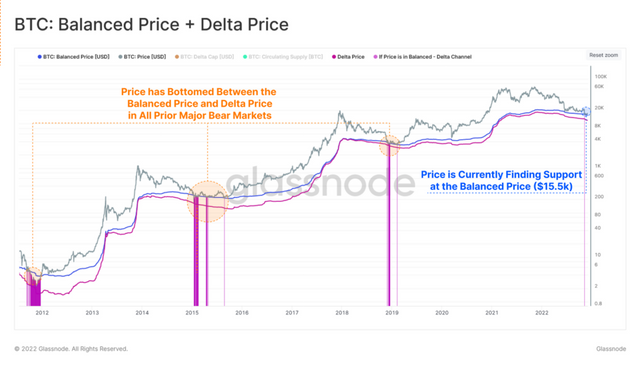 The chart shows two on-chain metrics to better represent the network's cost basis, and which have been breached in previous bear markets. Balanced price (Balanced price, blue band) is an experimental attempt to capture the 'fair' valuation of Bitcoin by measuring the difference between the value investors paid for it and the value of liquidated Bitcoins (Transferred price). The delta price (Delta price, purple band) is the difference between Bitcoin's realized capital and capitalization divided by circulating supply; the moving average refers to Bitcoin's total lifetime. In none of the previous besses did the price of Bitcoin fall below the 'Delta Price' (purple). Only for about 136 of the last 4518 BTC days was there a period where we could see the price 'touching' the balanced price. Currently, we see that both lines are between $15,500 and $12,000. Bitcoin's price briefly found itself near the balanced price after the collapse of FTX, but the bulls quickly reacted by taking the stock up. Throughout BTC's history, the balanced price has proven to be the ultimate support level for Bitcoin, below which declines have never occurred.

Bitcoin chart, M30 interval. The major cryptocurrency managed to hold the $17,000 level despite yesterday's dynamic sell-off, during which supply quickly pushed the bulls on the defensive and prevented it from reaching the $17,500 level. We also see that bitcoin continues to correlate with the NASDAQ index (yellow chart). Yesterday's declines on the indexes translated into sentiment in the cryptocurrency industry. As a result, Bitcoin has again slipped below the 200-session average (red line), and the next closest support is the levels at $16,800, where the 38.2 Fibonacci abolition of the upward wave that began in late November is located.​

The EURUSD pair trades with calm negativity to move away from 1.0515 level, to hint continuing the decline on the intraday basis, targeting visiting 1.0425 followed by 1.0285 after breaking the previous level. Therefore, the bearish bias will be suggested for today, noting that failing to break 1.0425 will lead the price to build bullish wave and attempt to resume the correctional bullish trend again.

USDJPY - Trading in a local downtrend

Thus, the average salary compared to 2021 added only 1.8%, while last month, it increased by 2.1%, and analysts predicted a continuation of the positive trend to 2.0%. The Household Expenditure Index slowed to 1.1% in October from 1.8% a month earlier, which led to a decrease in the annual rate to 1.2% from 2.3% in the previous period, while the total income of employees in the form of wages increased by 1.8%, down from 2.2% a month earlier. 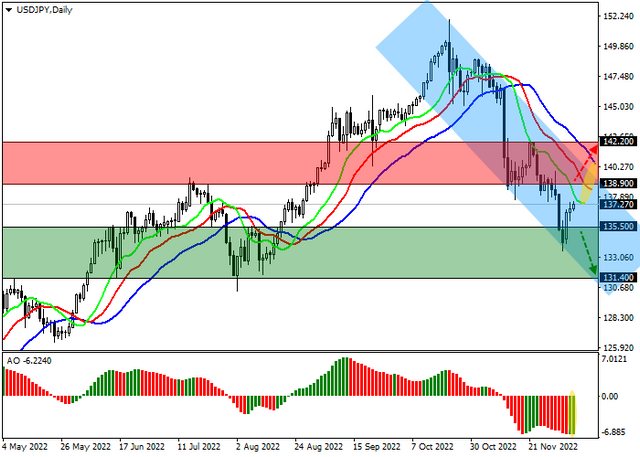 On the daily chart, the trading instrument is moving in a local downward corridor, and the technical indicators maintain a stable sell signal.

In recent days GBPUSD moved further away from six-month high of $1.2355 reached earlier this month as recession fears sparked demand for safe haven assets including US dollar. Also the outlook for the sterling remains clouded by fears of a domestic recession. BOE Governor Andrew Bailey has been warning markets that tightening expectations is overdone with the UK toppling into a two-year recession. Nevertheless today we can observe some dollar weakness which enables the GBPUSD pair to bounce off the local support at 1.2150. Nevertheless, the main sentiment remains bearish, therefore a move towards 1.20 level or even key support 1.1865 cannot be ruled out.

USDIDX struggles to break above key resistance at 105.30 which is marked with previous price reactions, 200 SMA (red line) and 23.6% Fibonacci retracement of the upward wave launched in May 2021.

Thus, according to November data, the growth of Q3 gross domestic product (GDP) amounted to 0.3%, which exceeded analysts' expectations of 0.2%, and the annual rate slowed to 2.3% from 4.2% earlier, according to preliminary estimates at 2.1%, helped by an increase in employment by 0.3% from an estimated 0.2%. Thus, employment in the region increases by 1.8% YoY and leads to an increase in the overall level of the indicator to 164.499K from 164.475K a quarter earlier. 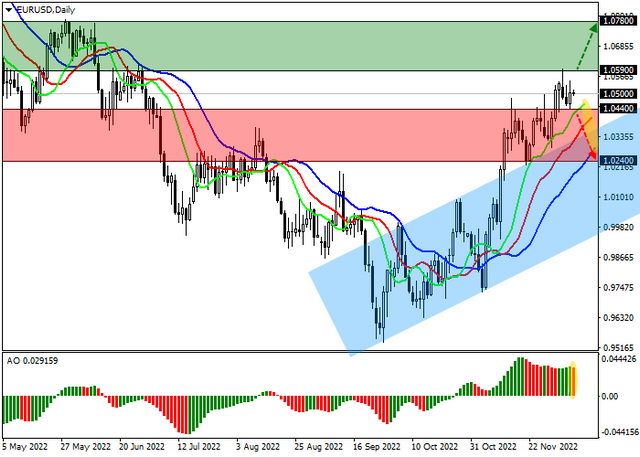 On the daily chart, the trading instrument continues its corrective growth and is confidently holding above the resistance line of the local ascending corridor, and the technical indicators maintain a stable upward signal.

The GBPUSD pair shows some slight bearish bias now to move around 1.2200 level, affected by stochastic negativity, while the EMA50 continues to support the price from below, to keep the chances valid to continue the expected bullish trend on the intraday and short term basis, which its next target located at 1.2345. Note that breaking 1.2130 will stop the expected rise and press on the price to start bearish correction that its targets begin by visiting 1.1925 areas. 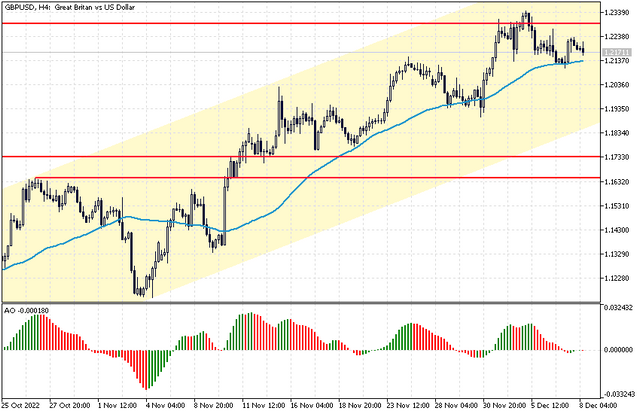 A while ago we saw a recovery in the oil market due to the Keystone pipeline spill, for which a federal investigation has already been launched. However, oil started its downward movement after markets circulated reports indicating that some senators in Congress have come up with a new initiative to increase taxation on 'Big Oil' companies in order to boost budget revenues. In addition to increasing taxation, the senators want to push oil companies to dramatically increase production. Politicians are clearly concerned about pro-inflationary increases in US oil prices. As a result, 'black gold' has come under pressure again and is giving back much of its earlier gains.

NZDUSD leans on the channel’s support

The NZDUSD pair faced temporary negative pressure to test the bullish channel’s support line, starting to rise now, to keep the main bullish trend valid, waiting to test 0.6467 as a first station, noting that breaching this level will extend the bullish wave to reach 0.6530. Therefore, we will continue to suggest the bullish trend for the upcoming period conditioned by the price stability above 0.6375 and 0.6345 levels. 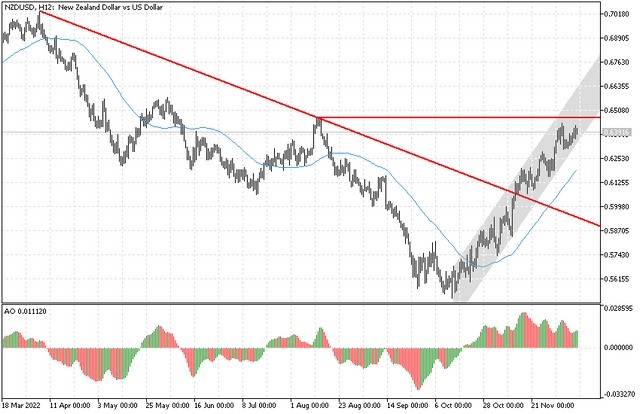 The USDJPY pair shows positive trades by today’s open to attempt to breach 136.50 level, to hint the attempt to recover in the upcoming sessions, but we notice that the technical indicators provide negative signals that hinder the positive attempts, to face contradiction between the technical factors that makes us prefer to stay aside until the price confirms its situation according to the mentioned level. Note that holding above 136.50 will lead the price to achieve intraday gains that target testing 138.25 areas mainly, while trading below it again will reactivate the negative scenario that its targets begin at 135.25 and extend to 134.25.

The USDCAD pair traded positively on last Friday to test the key resistance 1.3680, keeping its stability below it until now, to keep the bearish trend scenario valid for the upcoming period, supported by stochastic loss to the positive momentum, waiting to head towards 1.3500 mainly. On the other hand, we should note that breaching 1.3680 will push the price to turn to rise and achieve gains that start at 1.38. The USDCHF pair trades positively by today’s open to attempt to breach 0.9355 level, but we will depend on the last daily close below this level to keep our bearish overview, which targets 0.93 followed by 0.9240 levels as next main stations. Stochastic loses its positive momentum clearly to support the expected decline, besides the negative pressure formed by the EMA50, taking into consideration that consolidating above 0.9355 will stop the negative scenario and lead the price to start new recovery attempts.

The EURUSD pair returns to test the bullish channel’s support line, and we need to get positive motive that assists to push the price to resume the main bullish trend within the mentioned channel, which targets 1.0600 followed by 1.0745 levels as next main stations. Until now, we continue to suggest the bullish trend that gets continuous support by the EMA50 conditioned by the price stability above 1.0515, noting that breaking this level will stop the positive scenario and cause key turn to the trend to the downside.