GBPUSD - Statistics from the US again disappointed investors

The pound is actively gaining in value after the publication of data on business activity in the leading sectors of the economy and the depreciation of the US currency, currently trading around 1.2110. 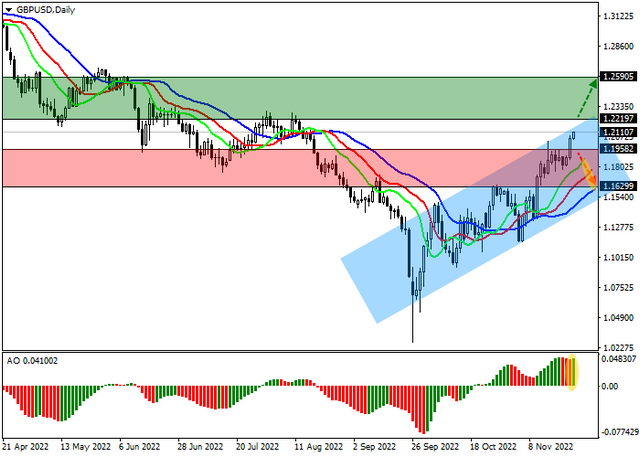 On the daily chart, the trading instrument moves within the local rising channel, reaching the resistance line at 1.2200 yesterday, and technical indicators are preparing for a local correction.

The GBPUSD pair fluctuates within tight track since morning, which keeps the bullish trend scenario valid as it is without any change, depending on the price stability above 1.1990, supported by stochastic approach to the oversold areas, reminding you that we are waiting to rally towards our next positive target that reaches 1.2260. 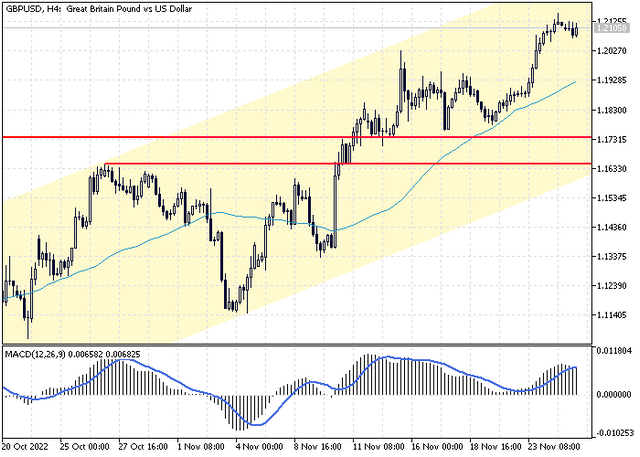 The USDCAD pair didn’t show any strong move since yesterday, to remain stable below 1.3350 level, thus, our bearish overview will remain valid and active for the upcoming period, as the price completed forming double top pattern that has negative targets that reach 1.3205. 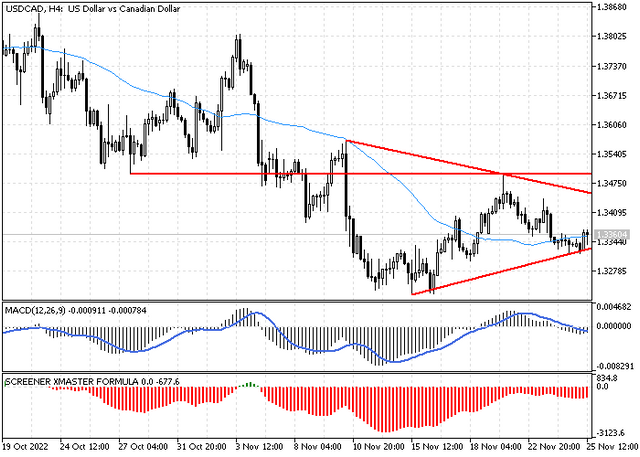 Gold price tests the key support 1746.4 and keeps its stability above it until now, which keeps the bullish trend scenario valid for the upcoming period, supported by the EMA50, waiting to resume the bullish bias to visit 1765 initially. On the other hand, we should note that breaking 1746.4 and holding below it will stop the positive scenario and push the price back to the correctional bearish track again, to head towards testing 1721.65 areas initially. 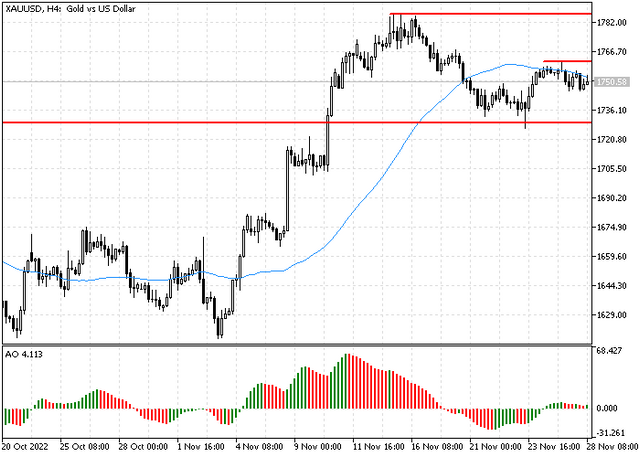 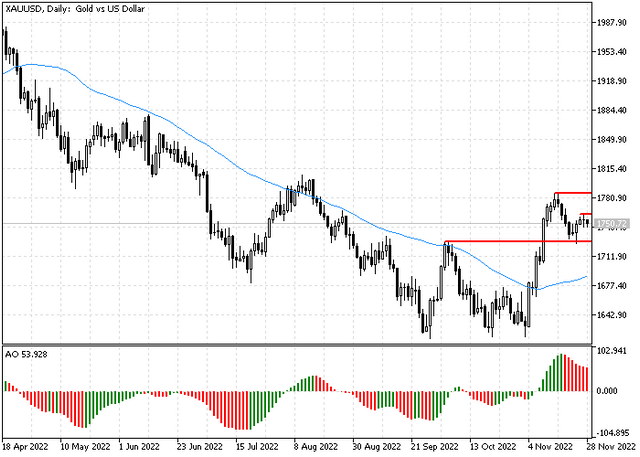 The reason for the negative dynamics was poor macroeconomic data: according to the Australian Bureau of Statistics, retail turnover in October fell by 0.2% after rising by 0.6% in September, which was the first decline since falling by 4.1% in December 2021 and is a consequence of the weakening in all leading industries, except for products retail trade. The leaders of the negative movement were department stores, which lost 2.4%, closely followed by the clothing trade sector (–2.0%), and for the first time since January, the indicators of restaurants and cafes decreased (–0.4%). ABS Head of Retail Statistics Ben Dorber said the correction results from higher interest rates and could be long-term. 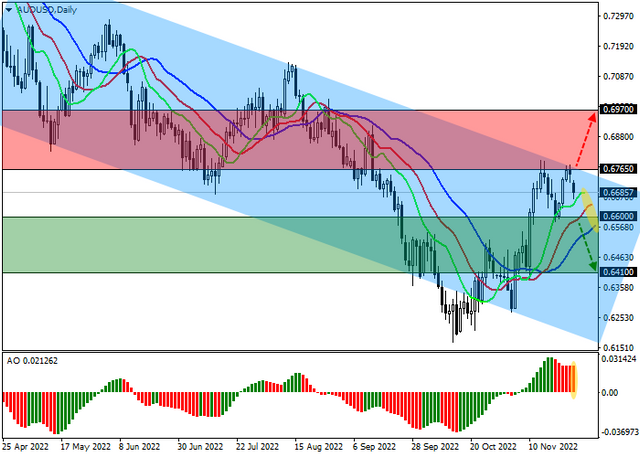 On the daily chart of the asset, the price is moving in a downward channel, and after reaching the resistance line, a reversal begins to form. The technical indicators maintain a weakening buy signal.

The NZDUSD pair faced negative pressure to break 0.6240 and settles below it, which pushes the price to achieve more expected decline in the upcoming sessions, targeting visiting 0.6100 areas mainly. 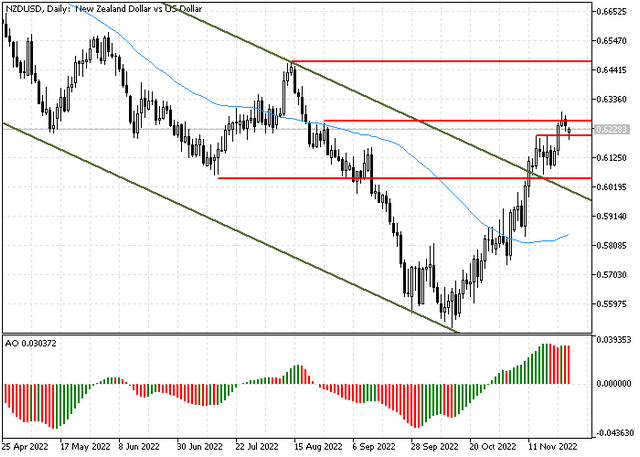 Therefore, the bearish bias will be suggested for today, noting that breaching 0.6240 and holding above it again will reactivate the positive scenario that its first target located at 0.6315. 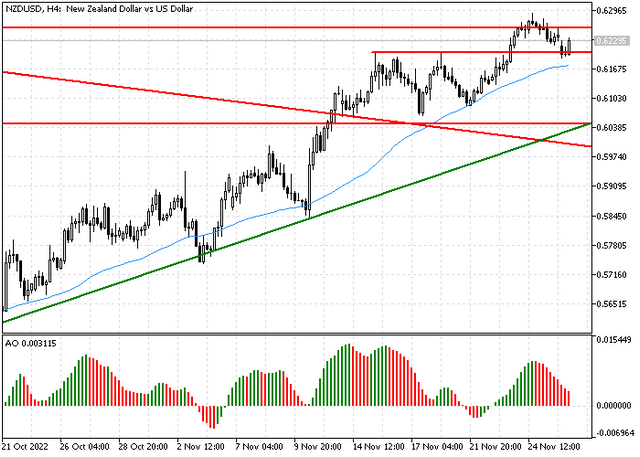 According to the latest survey, the situation of small and medium-sized enterprises in the third quarter improved markedly: 23.5% of enterprises expect difficulties in acquiring resources, and not 26.8%, as it was before, against the backdrop of a decline in inflation to 6.9% from a peak of 8.1%, only 32.4% of organizations expect a new price increase, which is lower than 34.0% in the previous period; and 34.4% predict a decline in profitability, up from the previous 35.9%. Overall, 29.8% of businesses said they still have problems maintaining inventory levels or purchasing, which is lower than the previous estimate but still quite a lot. 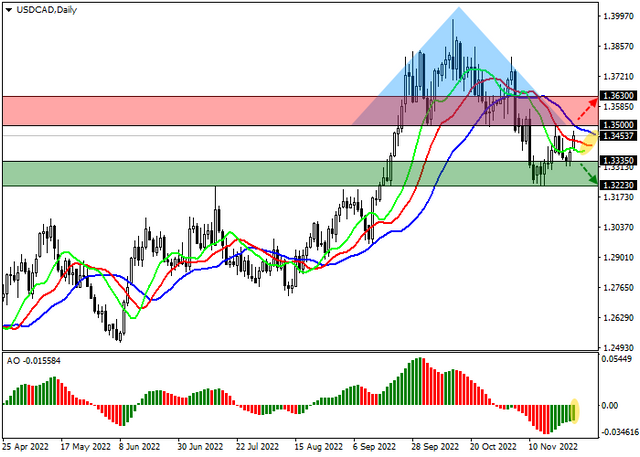 On the daily chart, the asset again approached the Neckline of the previously implemented Head and shoulders pattern to test it. The EMA fluctuation range on the Alligator indicator remains downwards, increasing the likelihood of the trend continuing, and the AO oscillator histogram forms bars in the sell zone.

GBPJPY tends to postpone the rise

The GBPJPY pair surrendered to stochastic negativity by forming new negative wave and press on the additional support 166.80 after failing to surpass 168.20 barrier. We will start suggesting the correctional bearish attempts that might target 165.90 followed by reaching the moving average 55 at 164.50, while surpassing the mentioned barrier will cancel the negative overview and allows us to wait to record many gains by moving towards 169.40 and 170.20. 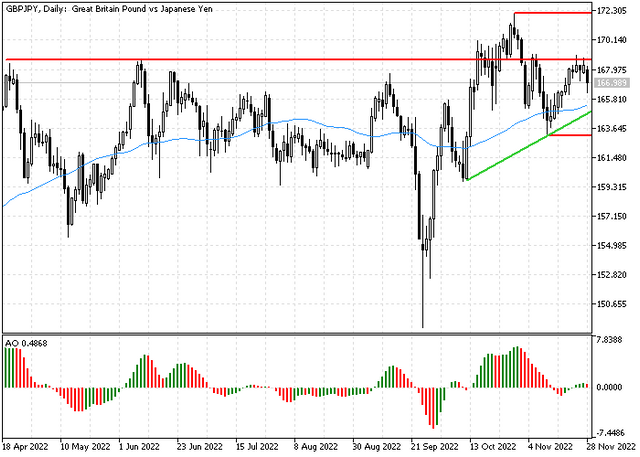 The USDCHF pair fluctuates with calm positivity to approach 0.9500 barrier, noticing that the EMA50 forms continuous negative pressure against the price, to support he continuation of the expected bearish trend for the upcoming period, which its next targets located at 0.9355 followed by 0.93. Therefore, we will continue to suggest the bearish trend on the intraday basis unless breaching 0.9540 and holding with a daily close above it. 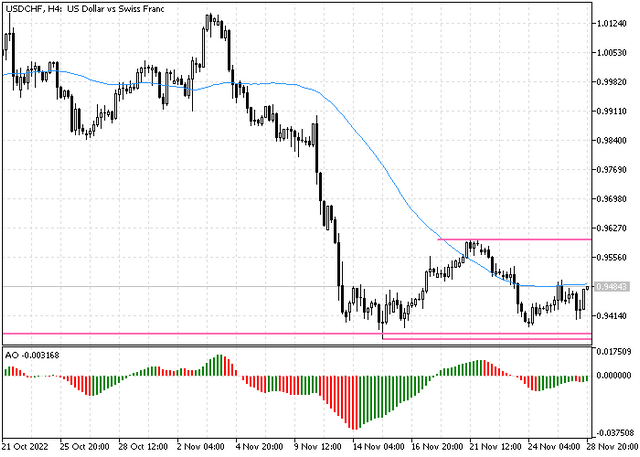 Thus, according to the report of Statistics New Zealand (Stats.nz), employment in the main sectors of the economy in October adjusted to 2.32M jobs, but the decrease in the indicator in the primary sectors was 1.7%, in the commodity-producing sector, growth reached 0.6%, while the service sector showed no change. Regarding age groups, the largest increase in the value was observed in the category of 15–19 years old, which added 18.5%, and the maximum outflow of workers was in the category of 25–29 years old, which amounted to –3.3%. Considering that the first category includes mainly part-time jobs, the increase in this category had little effect on economic activity. The situation in the asset may change tomorrow when the data on building permits is published, the positive dynamics of which reached 3.8% last month. 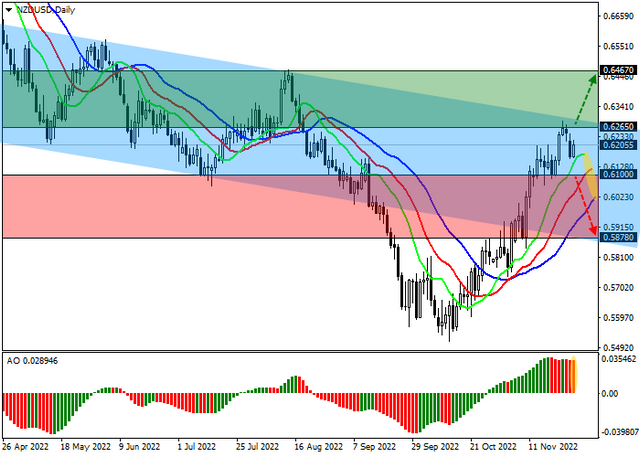 The trading instrument moves within the downward channel on the daily chart, steadily near the resistance line. Technical indicators maintain a stable buy signal, working out a slight correction.

Euro rose in European trade today, resuming the gains against dollar after a two-day hiatus on profit-taking from five-month highs back then, with current gains coming amid estimates of a 0.75% rate hike by the ECB next month. The greenback fell amid improving risk appetite in the market while demand on safe havens slow down, with investors expecting China to control the ongoing protest in China quickly. 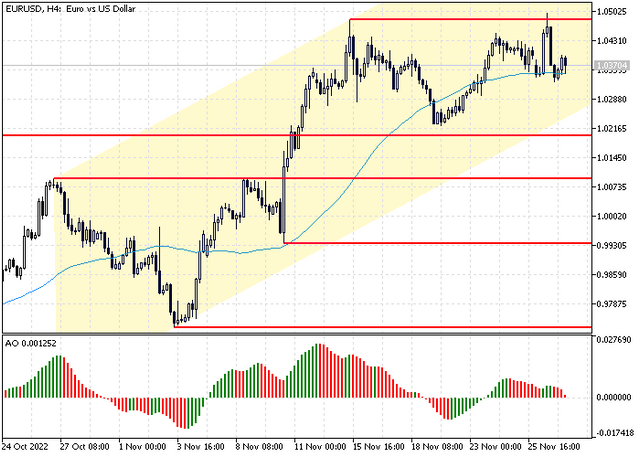 The dollar index fell 0.5% on Tuesday, resuming losses after a two-day advance from three-month lows back then at 105.22 against a basket of major rivals. The greenback recouped recently following some bullish remarks by a few Fed officials that showed the Fed might still be aggressive in its policy tightening efforts. Fed Saint Louis President James Bullard said the ECB needs to raise interest rates by a bit more, while New York Fed President John Williams said the Fed needs to carry on its path of rate hikes.

The USDCAD pair touched the key resistance 1.3500 and consolidated below it, to start providing negative trades by today’s open, which encourages us to suggest building bearish wave on the intraday basis, targeting testing 1.3350 initially. 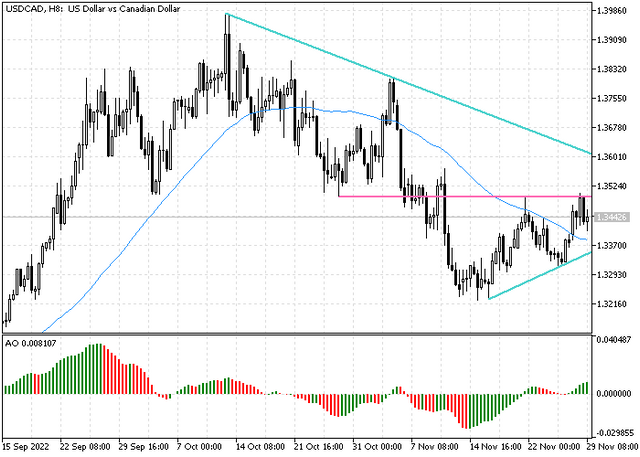 Therefore, the bearish bias will be suggested for today unless breaching 1.3500 and holding above it, noting that breaking the targeted level will extend the bearish wave to reach 1.3205 areas as a next main station.

The EURUSD pair shows some slight bearish bias to test the EMA50, while stochastic continues to move within the oversold areas, waiting to motivate the price to resume the expected bullish trend for the upcoming period, which targets testing 1.0515 as a next main station. On the other hand, we should note that breaking 1.0285 and holding below it will stop the expected rise and press on the price to turn to decline and achieve negative targets that start at 1.02 and extend to 1.0.

The GBPUSD pair trades within minor bearish channel that appears on the chart, and we believe it forms bullish flag pattern, as the price needs to breach 1.1995 to activate the positive effect of this pattern followed by rallying to resume the main bullish trend, which targets 1.2080 followed by 1.2200 levels as next main stations. Therefore, we will continue to suggest the bullish trend for the upcoming period unless breaking 1.1950 and holding below it. 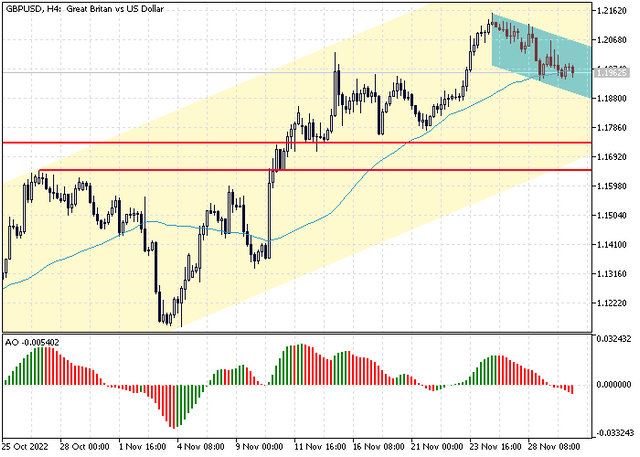 The USDCAD pair rallied upwards strongly to breach 1.3500 level and heads towards achieving positive targets on the intraday basis, on its way to visit 1.3680 areas mainly. Therefore, we expect to witness more rise in the upcoming sessions supported by the EMA50 that carries the price from below, noting that the continuation of the bullish wave requires holding above 1.35. 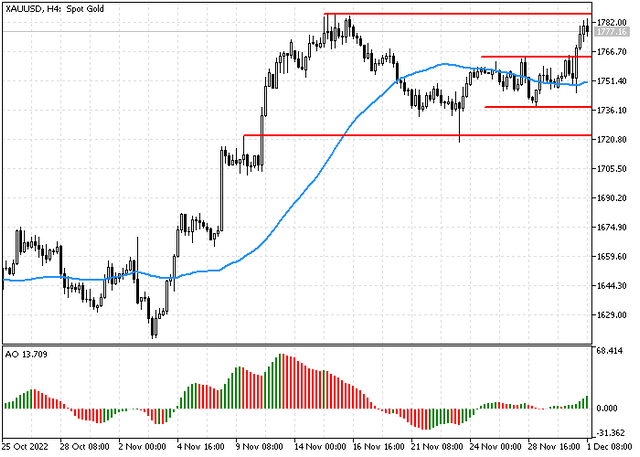 Therefore, the bullish trend will remain valid for the upcoming period, supported by the EMA50 that carries the price from below, noting that the continuation of the bullish wave requires holding above 1765 and the most important above 1746.4. 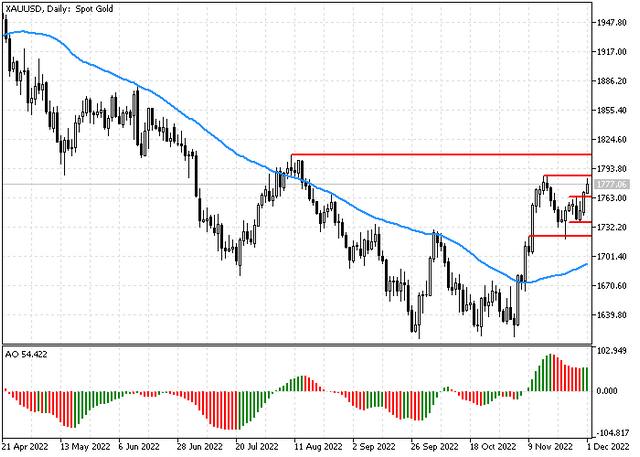 The NZDUSD pair rallied upwards strongly to succeed breaching 0.6240 and achieve our waited positive target at 0.6300, waiting for more expected rise in the upcoming period, and the way is open to head towards 0.6400 barrier as a next positive station. Therefore, the bullish wave will remain dominant in the upcoming sessions unless breaking 0.6240 and holding below it.

USDJPY - the US dollar continues to lose ground

Japan's industrial output lost 2.6% in October after falling 1.7% a month earlier, but the Economy Ministry forecasted an upward correction of 3.3% in November and a slowdown to 2.4% in December. Against this background, Manufacturing PMI also showed a negative trend to 49.0 points from 49.4 points earlier. Tomorrow, the national currency may receive the necessary support, as the speech of the Bank of Japan Governor Haruhiko Kuroda is expected, within the framework of which the next plans to support the yen exchange rate may be announced. 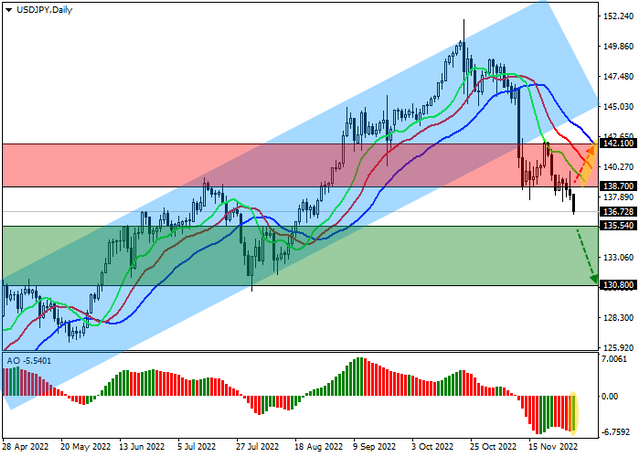 On the daily chart of the asset, the trading instrument is moving below the global ascending corridor, dropping to the lows of July, and the technical indicators maintain a stable sell signal.

AUDUSD - Key parameters of the Australian economy are declining​

Thus, the index of manufacturing activity from AIG in November fell to 44.7 points from 49.6 points earlier, and the Manufacturing PMI amounted to 51.3 points, which is lower than 52.7 points earlier. The volume of investments also continues to decline: investments in production equipment in the third quarter lost 1.6%, and capital investments of individuals decreased by 0.6%. Even more critical is the 0.2% decline in retail sales in November after a positive 0.6% trend in October, which reflects a drop in buying activity due to rising prices. 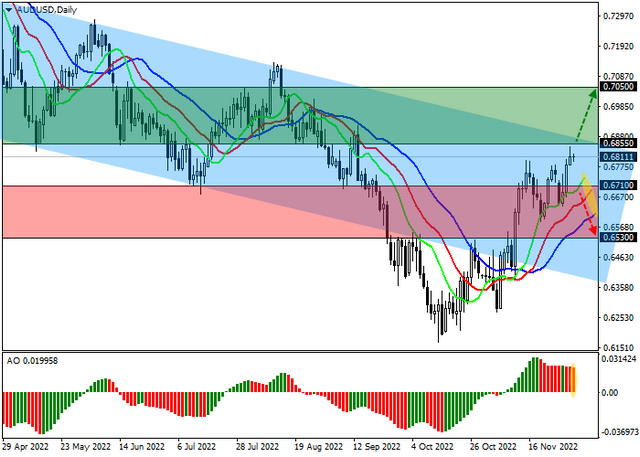 On the daily chart of the asset, the trading instrument is moving within a downward channel and is preparing to break the range resistance line, and the technical indicators keep a buy signal.

USDCHF - Dollar weakness does not allow the pair to recover

Yesterday in Switzerland, the Federal Statistical Office (FSO) published data on the volume of retail sales, which for the first time since the beginning of the summer, fell by 2.5% after rising by 2.6% in September. Inflation remained at 3.0% YoY, and there was no monthly change in the indicator, although analysts predicted its increase by 0.1%. The information portal procure.ch published a monthly index of business activity, which fell to 53.9 points in November from 54.9 points a month earlier, thus continuing the negative dynamics that began in April. 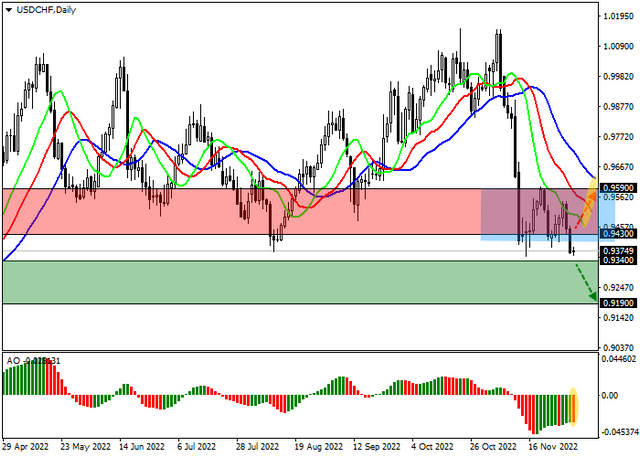 On the daily chart of the asset, the trading instrument has slowed down the decline and is gaining new strength to continue the trend, and the technical indicators maintain a sell signal.