US new jobs grew and worker compensation remained at 10-year high in September. Will the SP500 recovery continue?

Recent US economic data were positive: the employment cost index remained at 2.8% over year in September, a 10-year high. Private sector wages and salaries grew even faster: 3.1% over year. The private sector added more new jobs in October than expected - 227,000 versus 202,000 forecast, according to payroll firm Automatic Data Processing. And a week earlier the Bureau of Economic Analysis reported the US economic growth slowed less than expected in the third quarter: GDP grew 3.5% after 4.2% over year growth in the second quarter when a 3.3% expansion was forecast. Positive US data are bullish for SP500. However a weaker than expected October nonfarm payrolls report, due today at 14:30 CET is a downside risk which may weigh on US growth prospects. 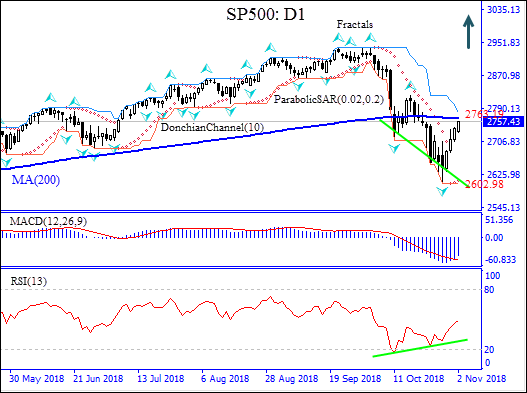 We believe the bullish momentum will continue after the price breaches above the MA(200) at 2763.19. This level can be used as an entry point for placing a pending order to buy. The stop loss can be placed below the lower Donchian channel at 2602.98. After placing the pending order the stop loss is to be moved every day to the next fractal low, following Parabolic signals. Thus, we are changing the expected profit/loss ratio to the breakeven point. If the price meets the stop-loss level (2602.98) without reaching the order (2963.19) we recommend cancelling the order: the market sustains internal changes which were not taken into account.