Most of the indicators currently used by traders in the Forex market were created for another market - the stock market and for another time, when there were quite monotonous trends and quotes were not so volatile as at present, when there are no trends as steady trends of unidirectional price movement. Therefore, the entire existing arsenal of indicators is not very suitable for trading in the Forex market and does not reflect the key moments of the state of this market. To assess the condition of the Forex market and its instruments, it is necessary first of all to analyze statistical histories of their quotations, which allows identifying patterns that are important for trade, which are latent for the standard indicators (supplied with the MT4 trading platform). One of these, providing a deep statistical analysis of instruments is the indicator PDP, which, based on the analysis of the smaller time frames, calculates in real time the probability distribution of the price for the larger time frames. The visual control of probability distributions, which provides the indicator PDP, allows us to achieve a deeper understanding of the modern market, namely:

2. Modes of operation of the indicator PDP.
For the convenience of reading the color-coded probability values from the indicator prob_distrib, it is desirable to make a black background on the color scheme of the main window of the MT4 terminal and display prices also with a dark line or red and green bars, the template of which is attached to this indicator.

The moving average, taken with the averaging period , is known to lag behind the bars; the sliding probability distribution that calculates the first mode of the PDP indicator also lags behind, which in this case represents the data in such form (Fig. 1). 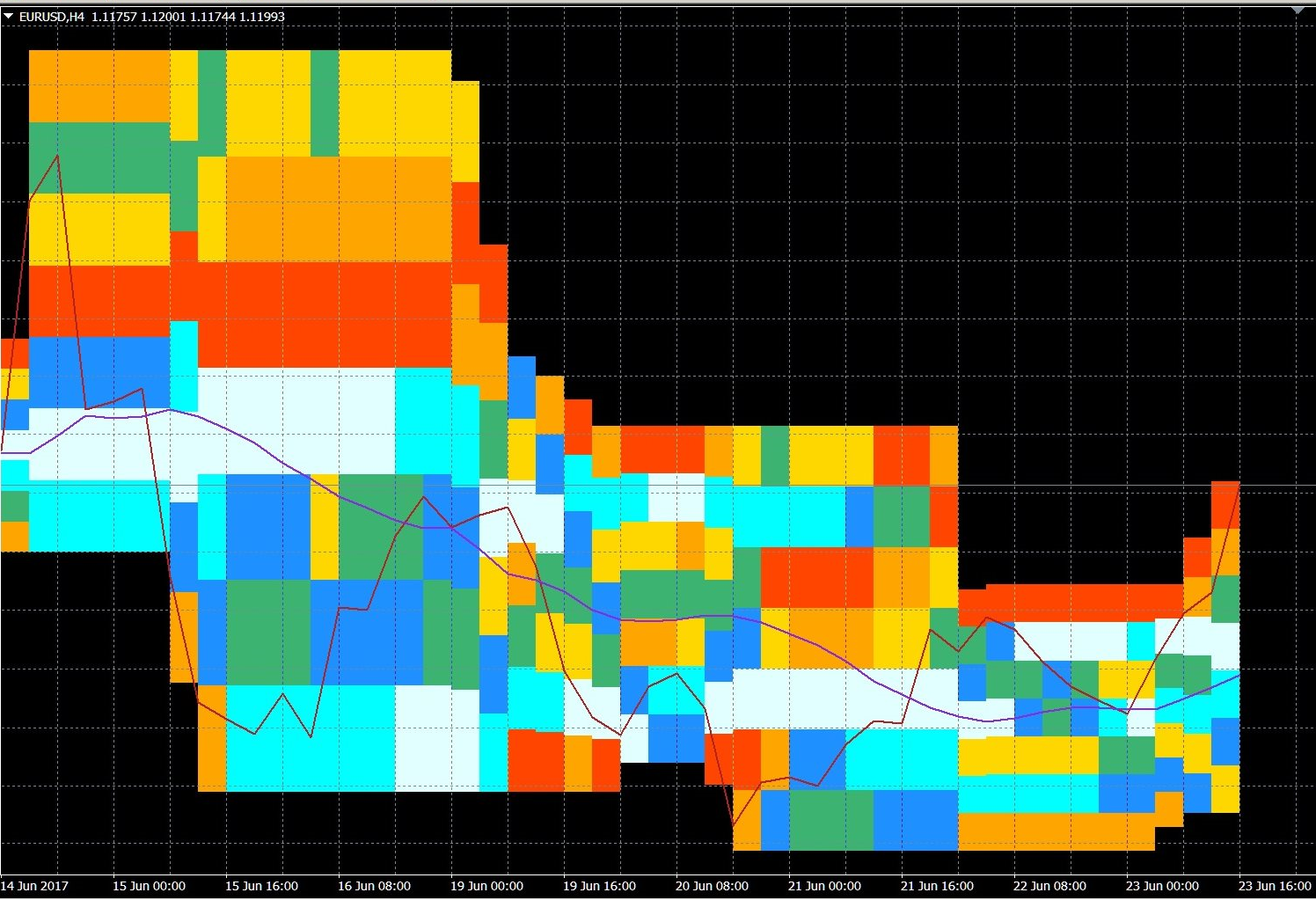 However, since the information on the frequencies of the price hit in given intervals is obtained on the basis of a large amount of data extracted from the lower time frames, it is possible to obtain algorithmically the without delay probability distribution, the calculation of which constitutes the second mode of operation of the indicator. In this case, the previous type of distribution is shifted to bars to the past, and information about the distribution on the bar is found on the bars of a large time frame, i.e. on the points where - the duration of a large time frame, a - the duration of a small time frame, that detailing a large, the bar on the bars of a large time frame, i.e. on points, and about a zero bar on on it himself, more precisely, on an array of the prices equal quantity ; at the same time, the probability distribution is calculated not on a bar that may be incomplete, but on the last such number of points of a small time frame that forms a full bar, which allows obtaining distributions for individual bars (Figure 2.1). By the same principle of using small, detailing time frames for analyzing large time frames, the average without delay is also calculated, which is also displayted by the indicator (blue-purple line or asterisks). 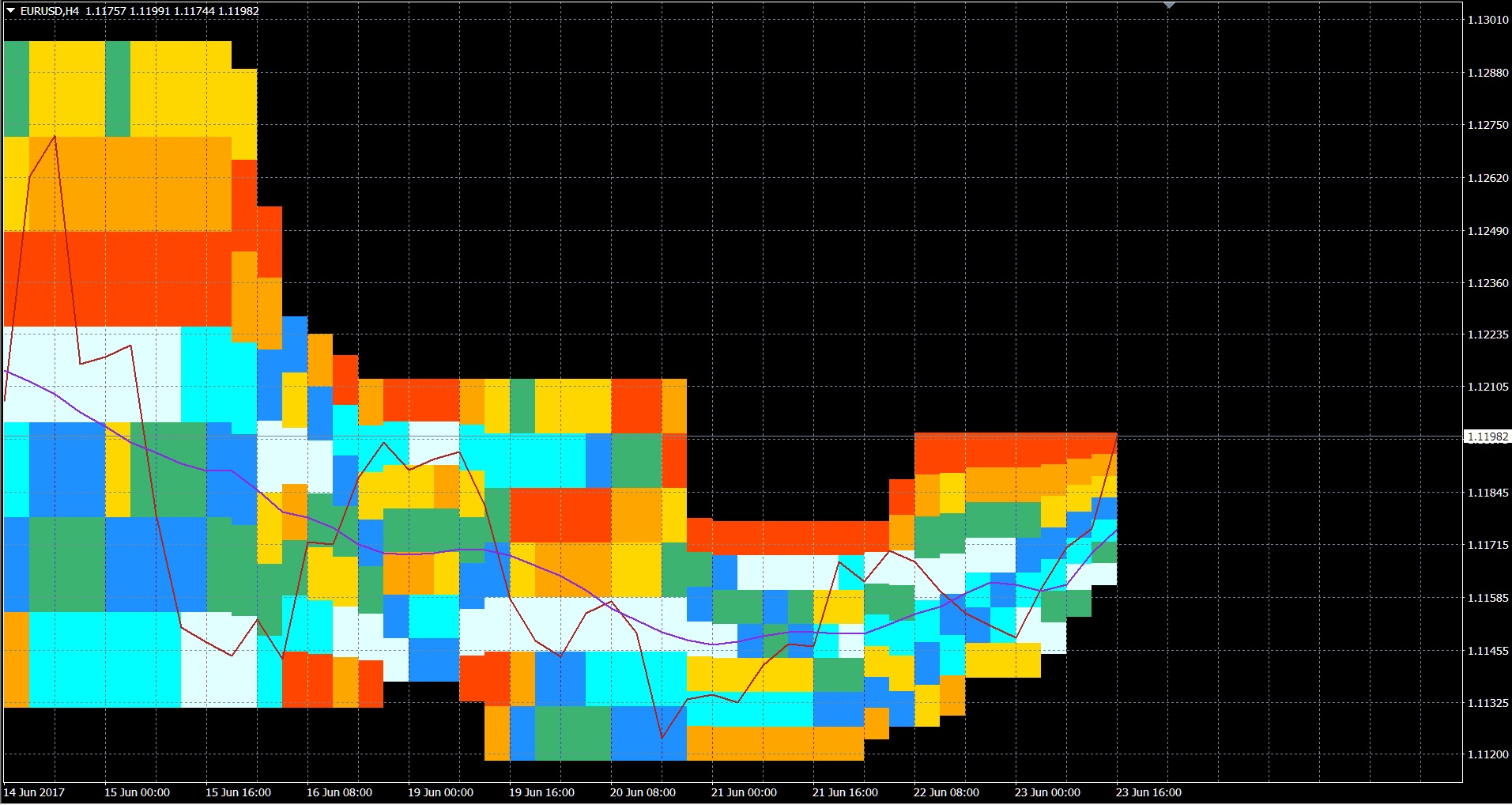 Fig. 2.1. Probability distribution over bars IS=1.

In the third mode, the algorithm for calculating the without delay probability distribution is even more complicated and, firstly, the current price channels corresponding to the averaging period are calculated at the end of the history, and secondly, by a special one (reminiscent of exponential smoothing with varying coefficients depending on the varying statistics calculation of smoothing points), suitable for this period, the filtering mean without delay (Fig. 3). 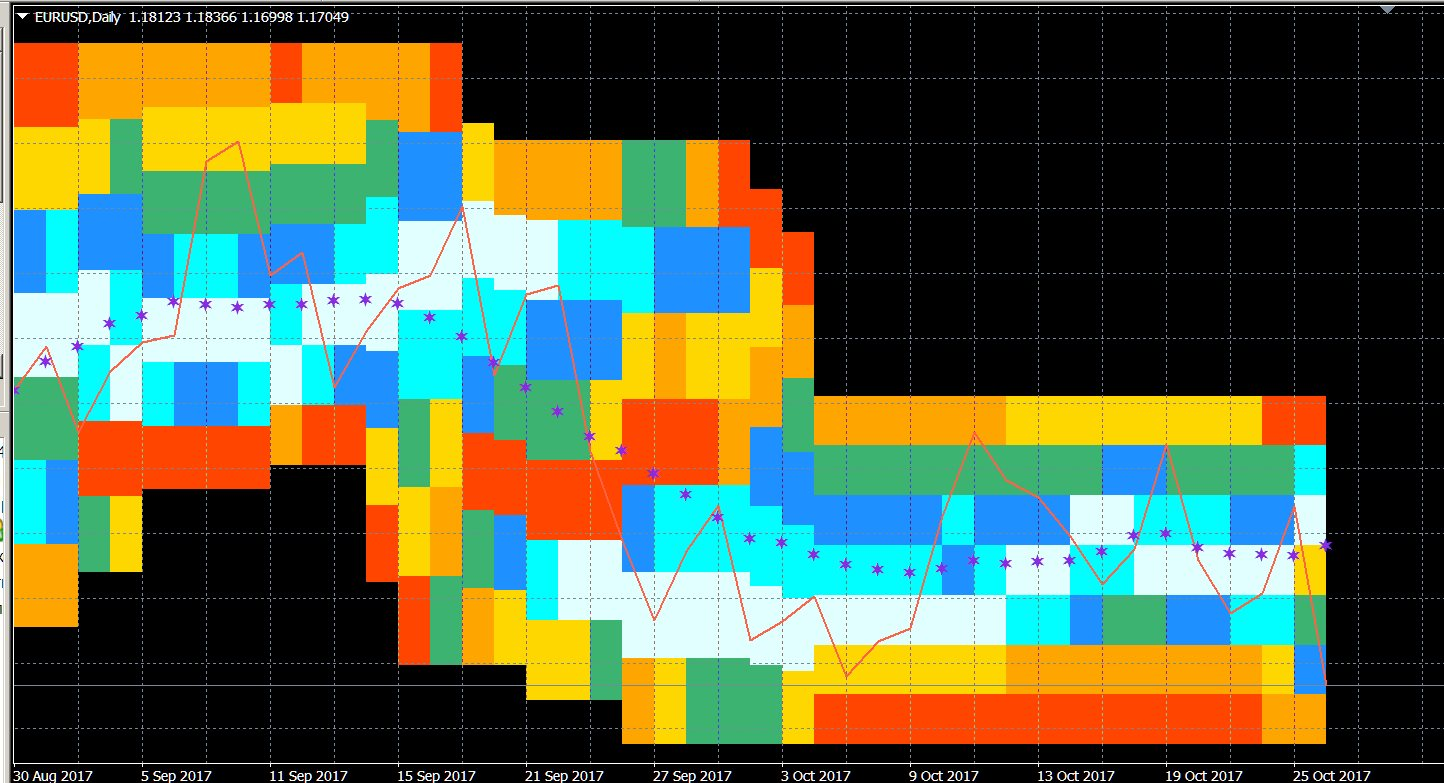 Fig. 3. The mode of calculating the without delay distribution with channels and adjusted mean IS=15.

In each of the above modes (1-3), the probability density mapping can be changed from its color coding (colors can be customized by the user) to the numerical presentation (Fig.4). 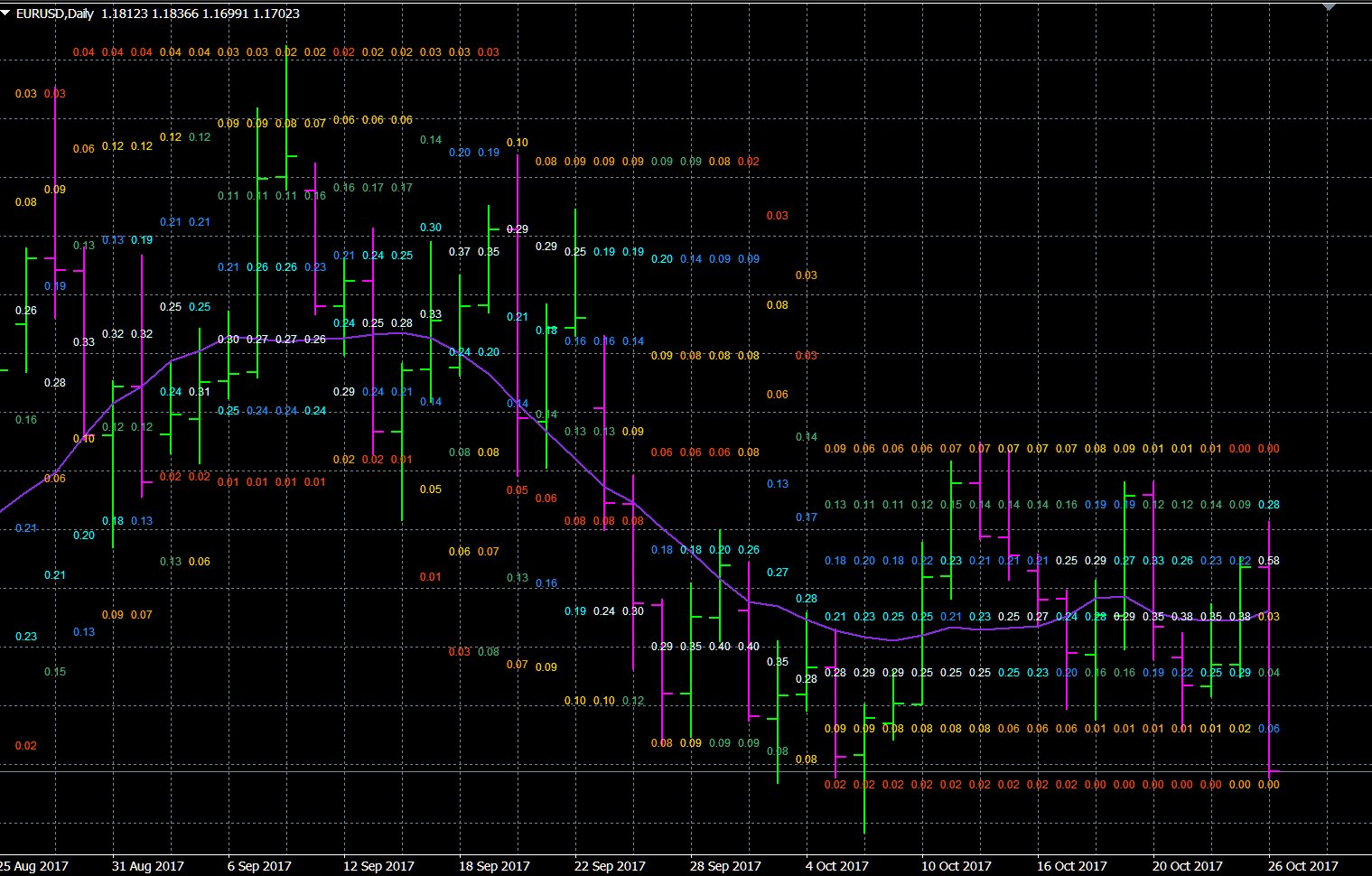 Fig. 4. The third mode with numerical probability mapping IS=15.

In the third mode, based on the calculated channel limits (which then need to place stops), the deposit and the specified risk level, you can also calculate the lot size for the trade within this channel, the lot information is displayed in the main window where its location is configured and can be selected, both at the bottom of the channel and at the top (Fig. 5). 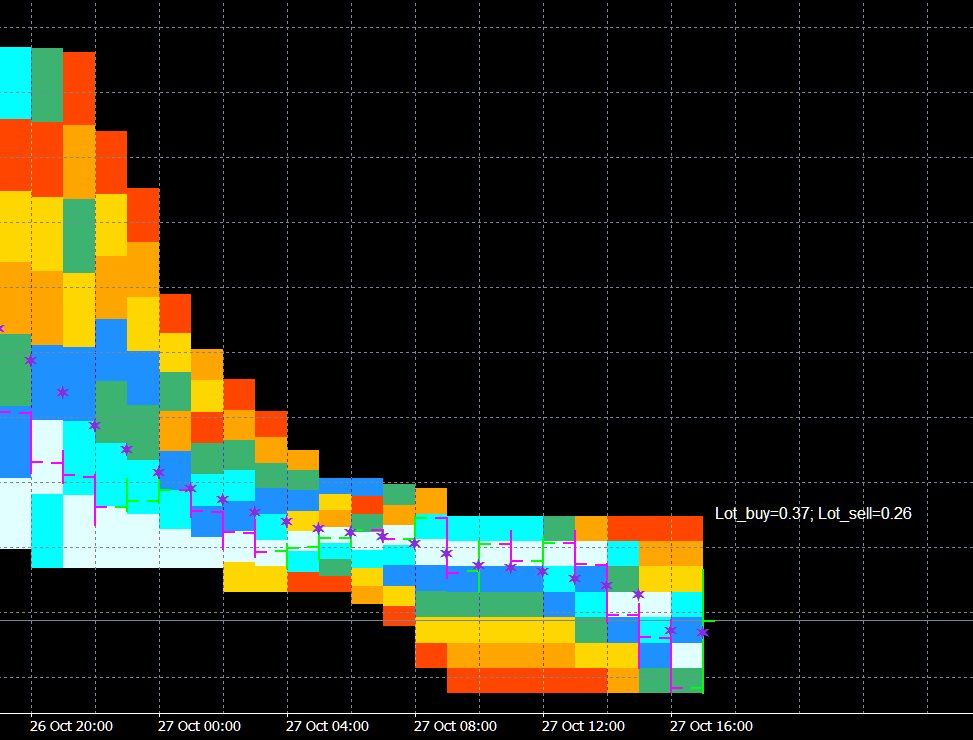 Fig. 5. The third mode with the calculation of the lot.

The current mode of operation and all its characteristics are printed on the "Experts" tab of the window of the terminal MT4.

Fig. 6. Information about the indicator mode.


The indicator settings are shown in Fig. 7, where they are described in the terminal window “inputs”.

The indicator settings are divided into:

4. Identified by the PDP indicator of the laws of the market and how to use them for successful trading.
Looking at the color maps of the probability distribution, it is easy to notice that the places where the price "trampled on" the most, form on all time frames rather extensive horizontal bands (Figure 8-9), which are similar to discrete energy levels, when the price from one level to another passes jump, almost avoiding intermediate points, in which the probability density of its hit are sometimes minimal. And, if the averages move smoothly, falling into such zones of maximum probability by passing through all intermediate points (and otherwise can not be) and do not distinguish similar probability concentration bands, these zones are easily identifiable by the indicator PDP, since they really form are constant levels that are essentially discrete or torn apart from each other. 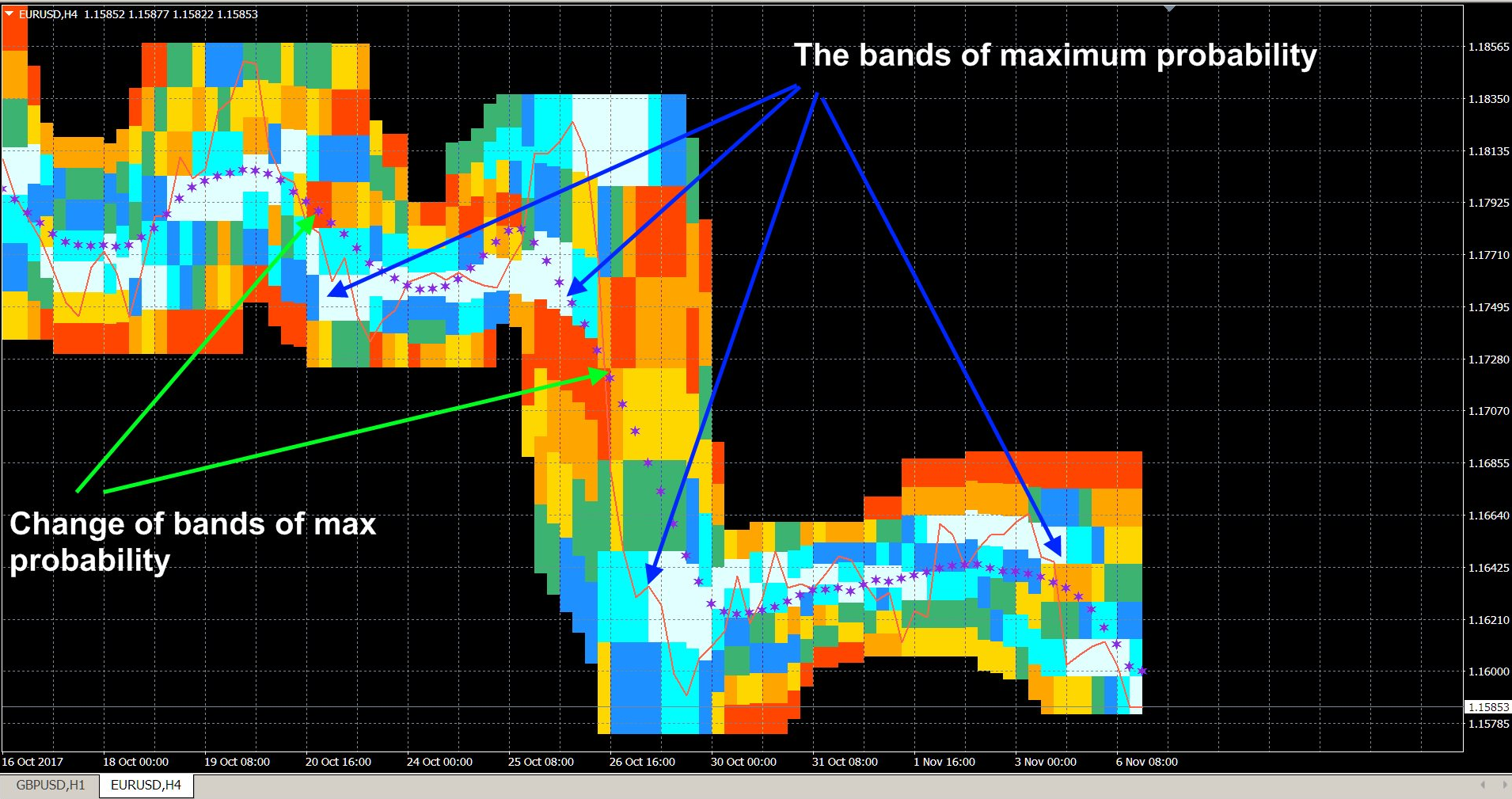 Fig. 8. The bands of the maximum probability concentration on H4.

The existence of such zones can be explained from a psychological standpoint, as a consequence of the habit of key market participants, which determines pricing, when they are confident in the adequacy of certain price values determined at a given moment. This key market participants try set this price for some time, which continues until important events occur. Such levels, imprinted in the memory of these participants, acquire a strong tendency to repeat, which can also be seen on the color distribution of the probability and should be used in the game. Namely, if a trend has been signify, say, to an increase in the price, then necessary (by examining the probability distribution on history, for which it may be necessary to shift the indicator calculation area in the past by the «Shifting the calculation area of the indicator» option) to identify maximum probability zone above current price, where to place the take-profit, since it is possible that the direction of price motion will change after this zone, but price will reach its with a high probability. From the analytical point of view, the existence of such price zones and their isolation from each other is also understandable, since highly nonlinear equations, in principle, describe such complex systems as the market, have huge sets of sharply differing solutions that jump and unpredictably replace each other in points of bifurcation, after which the price only fluctuates around such solutions until the next bifurcation. 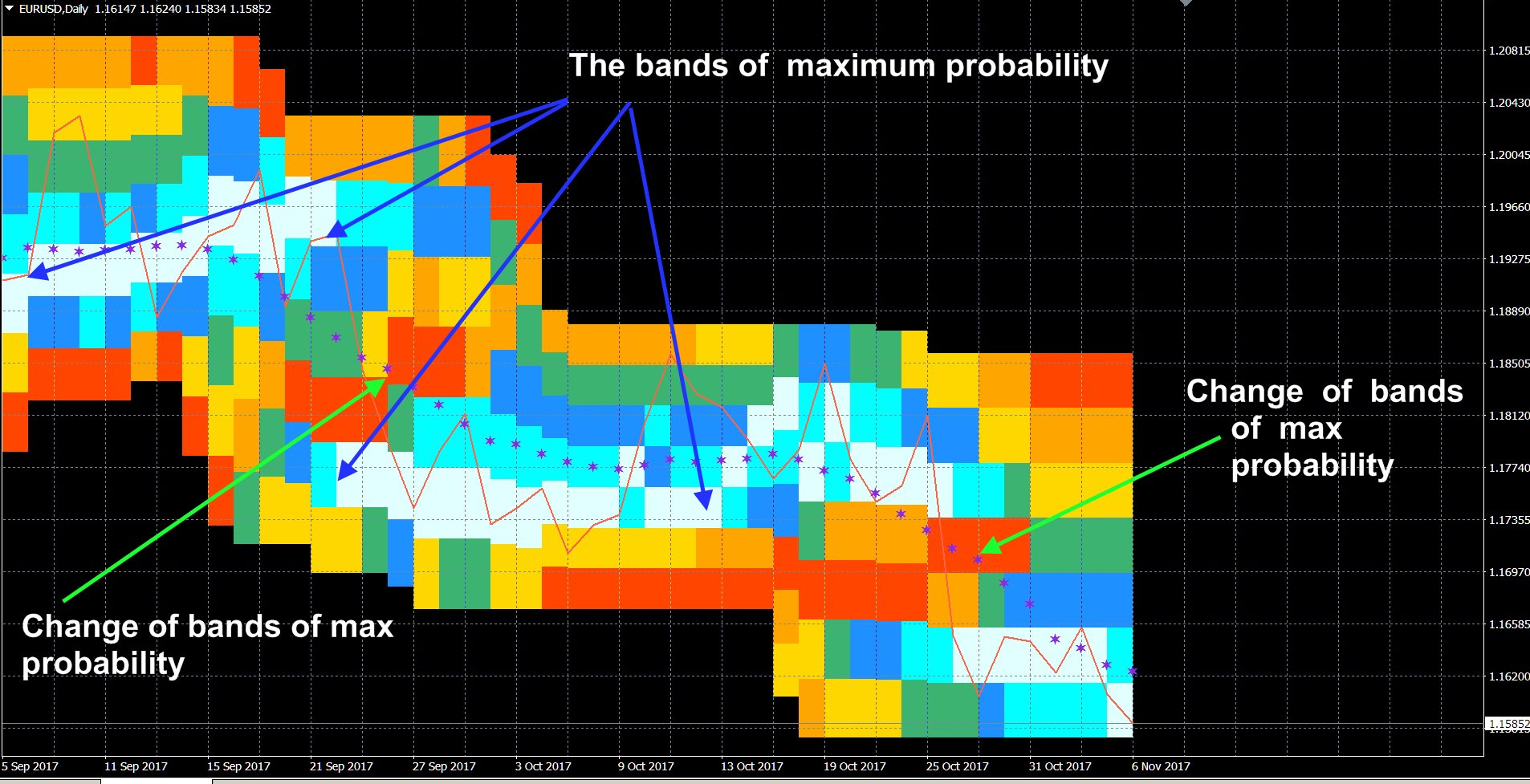 Fig. 9. The bands of maximum probability concentration and the order of their change to D1.

First, on the timeframe chosen by you for trading (M30-D1), roughly estimate the average length of the white bands , where - the number of bands visible on the chart, - their extent.

The indicator for both strategies is used in the third mode, where are calculated channels, probability distributions and mean without lag. The indicator channel and, accordingly, is intended mainly for trading through channels.

The indicator PDP allows you to reliably trade in channel strategies. Such trade should be carried out on the already well-drawn (but not too long compared to their average lengths) white bands and, of course, beforehand (at least 2 hours for trading on H1 and H4) before important news that may shift the price level to the new channel. In this case, the opening of positions should be done when the current price is either in the yellow or green sectors, and take the take-profit in the middle of the white line. The stops are placed slightly further than the full distribution channel (Figure 10). The value of the lot is calculated by the indicator itself, if in the indicator settings "Is channel strategy used?" set true. 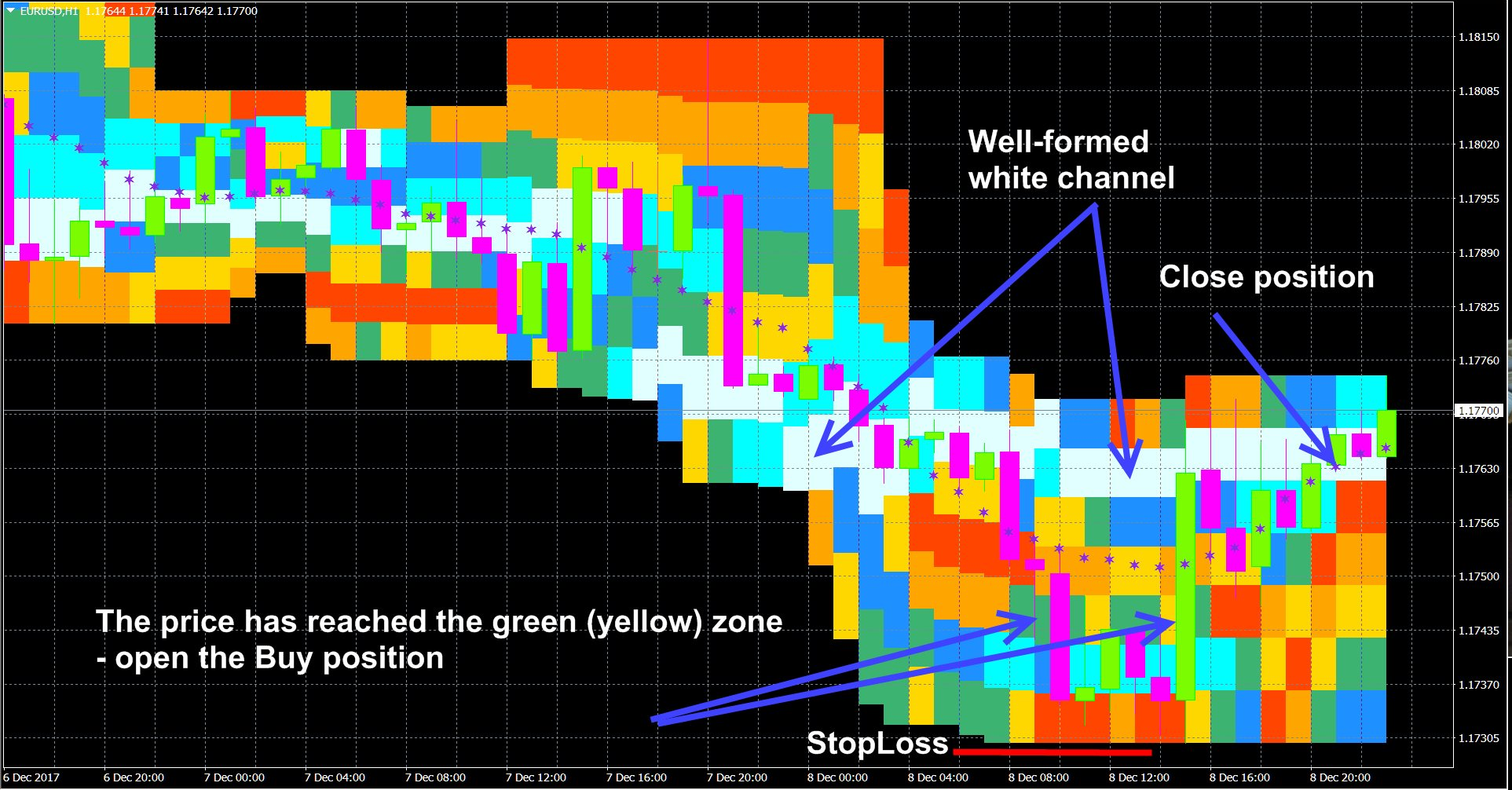 The bands of maximum probability jump discontinuously at the intersection of the without lagging mean of the red strip, which is the band with the minimum probability. Therefore, with the PDP indicator, the channel breakdown strategy can also be implemented in the form of a breakdown of the lowest possible level in an absolutely established channel , namely: put a pending order in the middle of the current red band (Buy_stop - if the red band is above the white and Sell_stop - if the red band is below white). A profitable order is closed manually when the price reaches a new established white band . Stoploss is also placed a little further than the full probability distribution channel (Fig. 11). To calculate the lot, the option "Is channel strategy used?" must be set to false. 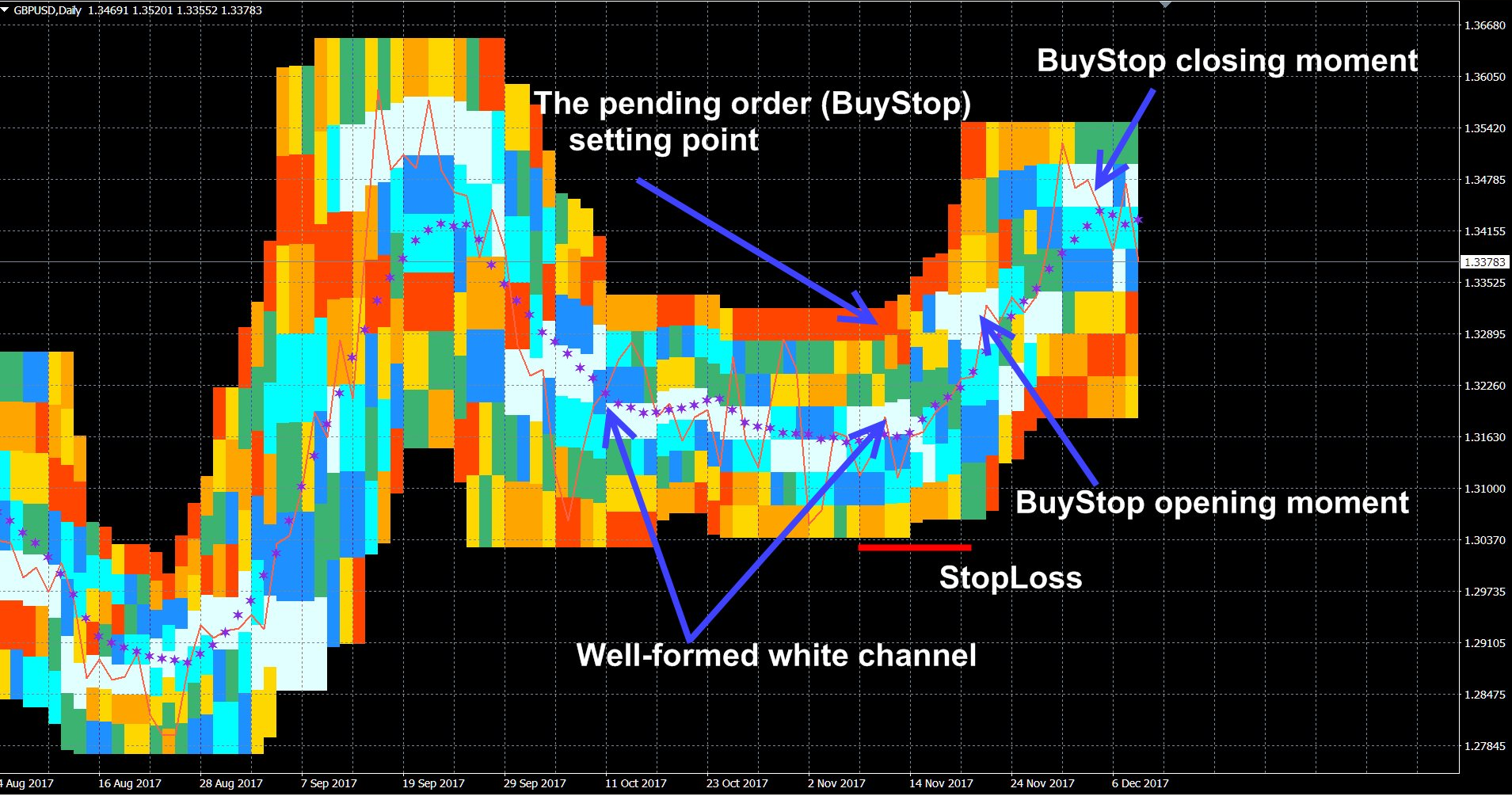 With this indicator, you can also use the classic form of the channel breakdown strategy by placing a pair of pending orders (Buy_stop and Sell_stop) and their stops just below both boundaries of the established channel.

For currency pairs, the trend strategy in pure form is realized only on very large-scale charts. If the trend and, most importantly, the high probability of its continuation in the same direction are established (fundamental analysis together with other indicators), then the PDP indicator can be used for the trend strategy for order placement and Stop Loss, more precisely, (3.1) the Buy Stop order for the uptrend (and Sell stop for the downtrend) and Stop Loss are set as in the channel breakdown strategy. It is possible (3.2) also to open an order as in the case of an in-channel strategy, i.e. when rolling back, when the price falls in the green or yellow sectors, separated from the white in the direction opposite to the trend (Fig. 12). In this case, the lot is calculated according to the appropriate types of channel strategies. Then, when the price steadily takes a new price level, Stop Loss is transferred in accordance with the boundaries of the new channel, etc., with a profitable closing of the Stop Loss order, when the price starts to unfold. In this case, if the trend is identified, for example, by MN, then the channel is determined by W1, if the trend is identified by W1, then the channel by D1, the trend is identified by D1, the channel by H4.


Fig. 12. Trend strategy with opening of a warrant on rollback and iteration of modifications Stop Loss.

Download or buy the indicator you can by reference

Information on other statistical indicators is available on the manufacturer's website http://www.statlab.simplesite.com.

A new version (v2.3) of the Probabilities distribution of price indicator has been released.