This guide sheds light on a very important but often overlooked concept in EA optimization — . But before we describe the actual use case of optimization, it would be wise to explain a bit more about this interesting trading system performance indicator.

A (or standard score) measures the distance between the mean of some set of the statistical results and the given observation.

In Forex systems, traders are interested in Z-score not of a trade's return (profit/loss size) but rather in a of the outcome — was it a profitable one or a losing one? A , calculated using winning and losing streaks, measures the dependence between the outcome of the previous position and the outcome of the next position.

If we consider profitable positions as positive results and losing positions as negative statistical results, counting the total number of all wins, losses, overall trades, as well as the number of win and loss streaks, we can calculate a for a given trading strategy or expert advisor.

Usually, a fluctuates between -3 to +3, but sometimes, can go above and below these "limits". A value of 0 means that we are dealing with completely random results.

As you can see, their Z-scores are totally different, with a large positive Z-score of the second system signaling high likelihood of switching between profitable and losing trades.

How to calculate Z-score of Forex system

To calculate a Z-score of your system, you need a rather large sample of trade outcomes recorded in chronological order. Using these outcomes, you can calculate Z-score with this formula:

You can see your by loading your MT4 or MT5 trading report into our Forex report analyzer.

Let's look at the following example calculation process of a system's Z-score.

Let's assume a sample of 100 trading outcomes with 40 streaks (winning and losing), 50 winning trades, and 50 losing trades; then:

Each Z-score value has a certain probability associated with it. This probability tells us how likely is it that the system that we analyze produces outcomes that are dependent on the previous outcome.

You can look at this table to quickly find the probability of such a connection between your trading results if you already know your Z-score: 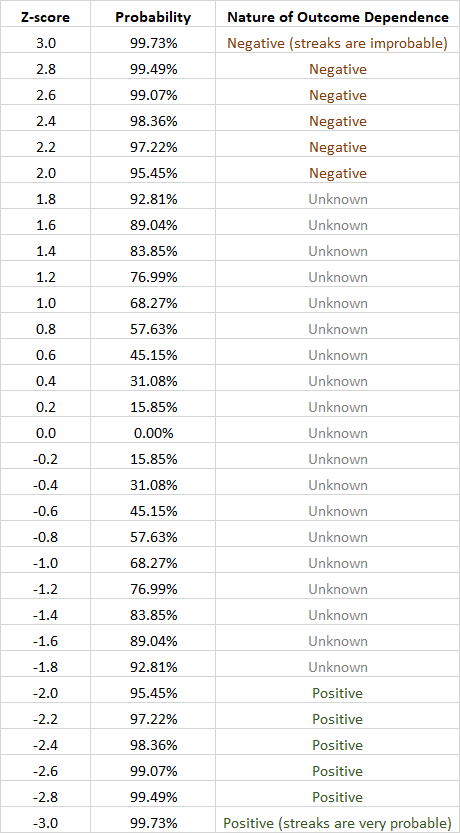 If we consider the Z-score value of -2.11 from the example above, we can see that the probability of positive dependence between the system's outcomes is between 95.45% and 97.22%, which is quite significant.

How to use Z-score in Forex?

If you know the of your expert advisor or trading system and its value is above +2 or below -2, you can "skip" a trade when a losing position is expected. Nevertheless, the profit on this "skipped" position should be tracked (virtually), to know when to start trading again.

It should also be noted that Z-score calculation makes sense only for sufficiently large samples. Math literature suggests a sample size of no less than 51 to get a reliable Z-score value.

For example, you backtested your expert advisor and found out that after more than a hundred trades, the resulting is +3.02, which means that profitable and losing positions are likely to appear in an alternating order (long streaks of losses or wins are not probable). The probability for Z-score value of +3.02 is greater than 99.73%.

It would make sense to modify the code of such an expert advisor to stop sending live orders when a profitable position is closed (the next one is very likely to be a loss). The EA would then enter a sort of a virtual trading mode, where position is opened and tracked only virtually (using MQL4 variables). When such position is closed (virtually of course), its profit/loss is considered — if it is a loss, live trading becomes enabled once again; if it is a win, operation in virtual mode should be continued. This is how it should be done for positive .

Of course, it can be easily modified to work with negative .

You can download an example MT5 EA with positive Z-score optimization implemented:

This scheme of  optimization implies that you measure your on a backtest and then consider that it won't change much during the live run in future. An alternative plan would be to implement a constant measurement of  inside your EA's code and to adjust the optimization . The problem is that it is quite difficult to implement this in a live expert advisor.

When the shares of the winning and losing positions are very unequal, optimization may become a bit tricky. In this case, it is probably better to make it asymmetrical (favoring less rare outcomes) or to skip it completely, even if is above/below +2/-2.

One notable case where Z-score optimization would be very inefficient and even ruinous is when your expert advisor opens more than one trade at once and these trades have nearly identical chance of ending up in loss or in profit. If your EA trades like that, you need to count such a group of nearly simultaneous trades as one outcome when computing a Z-score.

If you have any questions regarding the use of a metric in expert advisor optimization or if you want to share some idea for using values in Forex trading, you can start a discussion on our forum.