What Is Moving Average?

Let's start with simple moving averages (SMA). A simple moving average is calculated by adding up the most recent N number of prices and then dividing that sum by N. What is N? It is called the period of a moving average and you can set it via your charting software. It can take any positive integer value from 1 to infinity. It indicates how many days (or hours, or weeks, or any other chosen periods of time) you will be averaging. The general formula for calculating a simple moving average for a given moment of time is:

With an exponential moving average (EMA), the calculation is more or less the same, but the difference is that exponentially less weight is given to the older data. This is done to reduce the lag. Here is a general formula to calculate an EMA:

It means that the EMA for today is calculated based on the EMA value yesterday, today's price and the special multiplier α, which can be anything from 0 to 1 (the higher it is, the sharper is the exponential decline of the weight of the older data). In Forex, α for an exponential moving average is usually calculated as 2 / (N + 1), where N is the period of the MA.

For example, we have the same data and period as in the above example for SMA. Let's calculate α:

The EMA of the first day is considered equal to the price of that day:

As you see, it is quite different from the result obtained using the simple moving average calculation.

If, for example, we choose the same data and period as in the examples above, we will get the following result for the weighted moving average:

Once again, the result is somewhat different from both SMA and EMA.

Consider the same example with the same 5 pieces of data. Let's calculate the multiplier:

The SMMA of the first day is taken as the price of that day:

Although it differs from all of the three previous variants of an MA, as you see, it is closer to the result obtained with the EMA calculation.

The nice thing about charting software is that you do not have to learn all these formulas; your charting platform will do the calculation for you. All you have to do is choose the period you want to calculate the moving average across and let the software plot it. Here is a MetaTrader chart of the daily GBP/USD showing all four types of moving averages applied to the closing price with a period of 14. The SMA is red, the EMA is blue, the WMA is green, and the SMMA is orange: 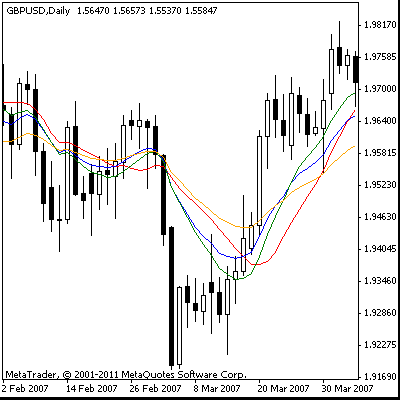