If you read Diary of a Professional Commodity Trader by Peter Brandt, among other good things, you would find a mention of a hikkake pattern there. Hikkake is often called a Japanese candlestick pattern, but in reality, it can be used with the common bar chart too as it doesn't rely on the Open and Close levels.

The pattern consists of two bars (though the first one also relies on the previous bar). The first bar (the blue one, on the images below) is the inside bar — its high should be lower than the previous bar's high and its low should be higher than the previous bar's low. The second bar (magenta) should have either higher high and higher low for a bearish hikkake or lower low and lower high for a bullish hikkake. These two bars offer a hikkake setup, which is triggered if any one of the next three bars breaks through the high of the inside bar (for a bullish hikkake) or through its low (for a bearish hikkake):

The patterns shown above demonstrate a breakout line (dashed), which is violated by the second bar after the pattern is completed, triggering trading signals.

As you see on the chart, the direction of the bars (the Open/Close relation) doesn't matter. Hikkake pattern is particularly good for Forex traders because it doesn't take into account the Open/Close levels of the candles. This offers unspoiled performance in the foreign exchange market, which closes and opens only once a week.

A trading strategy involving the hikkake pattern is evident from the above examples. A trader sets up a pending stop entry order near the inside bar's high or low. The  is set to the high (for a bearish hikkake) or to the low (for the bullish one) of the pattern's second bar. The level can be set according to the trader's preference. Increments of the  value (1×SL, 2×SL or 3×SL) work well, and a trailing stop is another option.

The examples shown on the first chart are from the November 2006 — March 2007 period. Those aren't some  instances — they represent average species of the chart pattern. Patterns A and D are not triggered by any of the three bars following the hikkake formation. Pattern B is triggered on the next bar and in two days reaches its target of 1×SL (). Pattern C was triggered by the second bar and after 5 days it has reached a target of 1×SL.

The second chart shows examples from the 2007 period. This chart is actually rich on hikkake, especially those that never trigger. Patterns A, C, D, G, H, I, and J fail to trigger. The pattern B shoots on the second day and the 1×SL target is fulfilled on the fourth day. The pattern E turns out to be a  one — although it is triggered on the first day, the  level isn't reached until day 13. The pattern F is quite unlucky — it gets both triggered and stopped out on the day #1. It is the only loser (with a rather tight though) across these two charts. 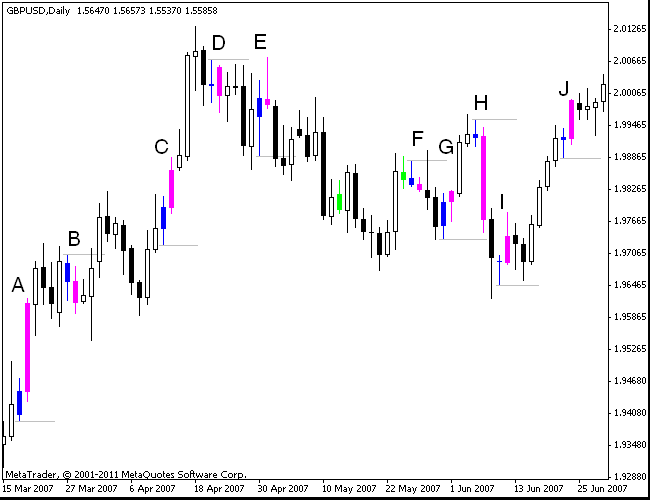 Hikkake is far from being a  pattern. It also doesn't offer too much trading opportunities. Nevertheless, it is a flexible chart figure that offers a chance to trade using pending orders and it has proven to be reliable enough to at least test it further.

If you have any questions or comments regarding the hikkake chart pattern, you can discuss it on our Forex forum.