Nassim Taleb is definitely a  trader and financial writer and, while usually that means something negative, in this case that property turns out to be a great advantage, as he proves in Fooled by Randomness many times that one shouldn't rely on the general wisdom (which is actually foolishness) of the public markets. 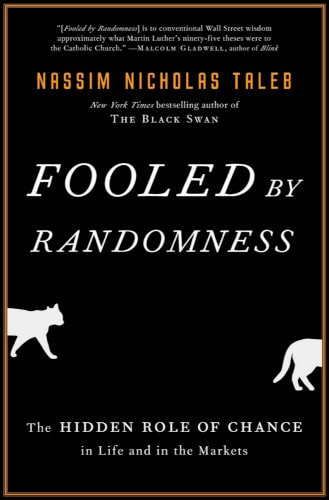 Fooled by Randomness is a book about probabilities in life — both in our daily life and in the financial markets. The problem is that the humans aren't quite fit to be dealing with probabilities. The book tries to approach this matter and states the following theses:

You wouldn't even call this book a "trading book" or a "coach book" as it is full of aestheticism intrinsic to the "real literature" and lacks the "teaching mood" of the " books". To sum up the advantages of Fooled by Randomness:

Of course, it isn't without disadvantages:

It must be said that Fooled by Randomness can really impress. It is a rare case of a trading book being useful even if you aren't going to trade in your life. And it is a book that can help you decide to avoid that path. It is worth every penny of its price.

You can also read our review of Nassim Taleb's newer book on randomness, The Black Swan.

If you have any questions, comments, or opinion regarding Fooled by Randomness by Nassim Nicholas Taleb, feel free to discuss this book on our Forex forum.