Here is the review of another book on probability by the "financial dissident" Nassim Nicholas Taleb. If you still haven't read his previous book — Fooled by Randomness — it is strongly recommended that you do so, even if you aren't into trading. His next book — The Black Swan — became a major bestseller and is a very important book, both for traders and for everyone else who works with the randomness. 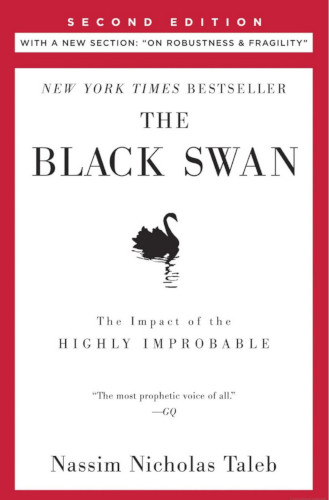 The main idea of the book is that we cannot avoid the Black Swans (rare events that are unpredictable in their nature) but we can try to decrease the amount of "bad" Black Swans in our life and increase the amount of "good" Black Swans — first, by admitting that our knowledge is very limited and by stopping to act like we can forecast rare events and, second, by choosing the life strategies, in which our potential success would be scalable and could surpass the potential failure. Other than that, the book offers the following important theses:

Although most readers like Taleb's previous book (Fooled by Randomness) more, this one also deserves attention and is very interesting despite the small amount of the new ideas compared to his previous work. Here are some advantages pointed out:

To balance this very positive review, it is worth mentioning that you will probably like Fooled by Randomness more than this one. Let's also list some disadvantages:

To sum it all up, if you still haven't read Fooled by Randomness, read it first. If you liked it and want more, read The Black Swan. If you didn't like it, then there is no reason for you to read The Black Swan. But, apart from the direct usefulness of Taleb's books, there is always a big portion of aesthetic pleasure in reading them. So, if you are looking for something to read, you can always stop by The Black Swan and combine the useful with the pleasant.

If you have any questions, comments, or opinion regarding The Black Swan by Nassim N. Taleb, feel free to discuss it on our Forex forum.