The Forex market stands apart from other financial markets in terms of liquidity, capital requirements, trade timings, and leverage. However, much like other businesses, scammers do operate in FX markets as well and always look for an opportunity to prey on unsuspecting investors. Even though authorities continue to expose extensive and  Ponzi schemes regularly, the scammers are able to find newer methods to con investors out of their life savings.

Since no two Ponzi schemes look alike, it becomes all the more difficult for an investor to identify and walk away. Thus, new stories hit headlines frequently. To protect the  money, from the perspective of a Forex trader/investor, it would be better to be aware of the stories of scammers who were caught and punished by law. In this regard, we will look at the story of one of the largest Forex Ponzi scheme operated in the last decade by Minnesota (USA) based residents Trevor G. Cook and Patrick J. Kiley.

Around the beginning of July 2006, Cook and Kiley began offering and selling investments in a foreign currency trading venture through UBS Diversified Growth LLC, an entity unregistered with US Commodities Futures Trading Commission in any manner. Taking advantage of the turmoil in the stock market, Kiley promoted the dubious scheme through the finance themed radio show (Follow the Money) he hosted. Both Cook and Kiley falsely stated that the deposit would be maintained in a segregated account in the name of the investor. Furthermore, the duo lied to investors that there is absolutely no risk to their investment because of the manner in which the trade was conducted. Kiley further elaborated to investors that Cook manages the investment activities through advanced and complex software, which performs arbitrage trading by taking advantage of the difference in the interest rates of G5 currencies.

Kiley also misled investors by stating that the program involved no risk to investors’ money as long and short positions were taken simultaneously in a currency pair. Kiley referred it as ‘fully hedged carry trade’. Kiley lied to investors that short positions are taken through an Islamic bank, which complies with Shariah law. Thus, according to Kiley, there is no need to pay interest for opening short positions whereas long positions, taken through other means, will continue to receive interest, thereby resulting in substantial and  profits between 10% and 12% per annum.

To make investors feel that it is a  opportunity, Kiley informed investors that for many years his venture ran the program at institutional level and is being offered to retail investors for the first time. In fact, one of his offerings claimed to have generated returns as high as 46% annually. Kiley also guaranteed through the offer document that investments can be withdrawn at the behest of the investor and the principal is ‘fully protected’. Kiley also went to the extent of informing clients that the position in USD/JPY pair is fully insured by a bond held at Deutsche Bank.

Until late 2007, both Cook and Kiley used UBS Diversified Growth LLC to receive deposits. As more and more investors (many of whom were senior citizens with little knowledge about Forex market) came forward to invest, Cook and Kiley formed several shell companies to accept deposits. While Kiley primarily used Universal Brokerage FX Management LLC, to collect deposits, Cook largely used Oxford Global Advisors LLC (reformed as Oxford Global Partners LLC in 2008) for receiving funds from investors. However, the offerings from all the companies were identical. Furthermore, the Universal Brokerage FX Management and UBS Diversified Growth shared the same registered address. Even the visiting cards of both Cook and Kiley indicated that they worked from the same office.

In 2008, Cook and Kiley further misled new investors by saying that the payments would be held in segregated trading accounts at the Swiss firm Crown Forex S.A. In this regard, two more domestic shell companies namely Basel Group LLC and Crown Forex LLC were also formed to defraud investors. Beginning July 2008, the investors were asked to make their checks payable to Crown Forex. The checks were then deposited in domestic bank accounts opened in the name of the shell companies. Kiley was the signatory for the account even though Cook made the final decision regarding the deposit, transfer and withdrawal of funds.

In the meantime, Kiley went to the extent of soliciting investors through his personal and official (Universal Brokerage FX Management LLC) website. The promotional materials also made false claims that UBS Diversified and Universal Brokerage are accredited financial firms.

Cook, on the other hand, solicited investors by hosting investment seminars and through Oxford Global Partners website. The promotional materials also made a bogus claim that Oxford Global Partners had assets worth $4 billion. None of the promotional materials offered by Cook and Kiley had details about the background and educational qualifications of themselves or those who worked under them.

Keeping investors on the hook

Additionally, to bring in investors, Cook also made use of the contacts he had established earlier on from his work experience at various commodities and futures trading firms. The prominent ones included The Oxford Private Client Group LLC, an investment adviser registered with CFTC at that time. All the companies with name beginning with Oxford had their offices in the 117- gothic style mansion (Van Dusen) on LaSalle Avenue in Minneapolis.

More than of the 1,200 investors and 70% of the $194 million in deposits were brought in by Kiley. Cook and Kiley had three more assisting sale personnel in the conspiracy: Jason Beckman, Gerald Durand, and Christopher Pettengill. Of the total deposits, the final $79 million dollars was received by Crown Forex LLC.

To keep the investors in a good mood, Cook and Kiley emailed fabricated account statements reflecting a gain of 0.8% to 1% per month (in line with the 10% to 12% yearly returns promised earlier on during the marketing of the scheme).

Further, to gain investors trust, approximately $51 million of the total deposits received was used to pay purported profits to early investors. Cook and Kiley spent $42.8 million for personal pleasures. This includes $18 million spent for ownership interests in two trading firms (35% in JDFX Holdings and 51% in Crown Forex S.A. – both headquartered in Switzerland), $12.8 million transferred to Panama for financing the construction of a casino, $4.8 million used for online gambling, $2.8 million used for the acquiring the Van Dusen mansion, $1.3 million for the attorneys, and $1 million to repay personal credit card bills.

Around $108 million of investors’ funds was pooled in trading accounts in the name of shell companies. This includes $48 million transferred between July 2006 and July 2009 to several accounts at PFG Best Inc., (at that time, it was a CFTC registered brokerage firm). The high-risk strategy employed by Cook and Kiley resulted in a loss of over $35 million. The rest of the money, around $11 million, returned to the bank accounts of the shell companies. Similarly, $23 million was deposited in several trading accounts held with JDFX Holdings. Cook and Kiley lost over $9.6 million because of risky trading strategies. Only $13 million returned to UBS Diversified, Oxford FX Growth and Cook’s personal account.

Cook and Kiley raised about $35 million between January and July, 2009. Withdrawal requests, if any, were processed using the money held in the name of shell companies in domestic bank accounts.

The eventual collapse began as more and more investors started sending withdrawal requests. In fact, lawsuits were filed and complaints were made to regulatory agencies as early as 2008. However, Cook managed to sweep the dirt under the carpet. When things started beginning to go out of control, as a final attempt to conceal investors’ assets, Cook paid $948,848 to his wife’s parents for their investment of $293,769. This includes $829,469 paid between June and July 2009.

In January 2009, Ty Schlobohm, an experienced trader working for Cherry Tree investment fund, was asked to check out Oxford Global. Schlobohm, who had the experience of reviewing hundreds of hedge funds, understood within 30 minutes that the offer and performance record put forth before him was 100% unreal. Following the meeting at the mansion, Schlobohm went to the FBI. As directed, he again went to the mansion several times as government informant and videotaped the meetings.

On November 23, 2009, the US district court of Minnesota ordered freezing of assets of Trevor Cook, Patrick Kiley and their respective (Oxford and Universal) companies. The order came on the basis of a complaint filed by CFTC charging Cook and Kiley with running a Ponzi Forex scheme since 2006 and defrauding US investors of more than $190 million.

In 2010, Cook was sentenced to 25 years of imprisonment at the federal prison in Sandstone, Minnesota. The  Beckman, Durand and Pettengill were sentenced to 30 years, 20 years and 7.5 years respectively. Kiley was able to delay the sentencing by accusing his attorney of ineffective advocacy. In July 2013, the judge sentenced Kiley to 20 years imprisonment (15 years for fraud and 5 years for money laundering). 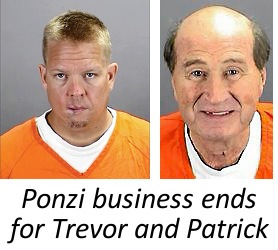 Of the 1,200 investors, 200 have received more than they invested. They were asked to return the excess money either as a single bullet payment or in installments.

As of August 2013, the remaining 1000 investors have received only 5.5 cents for every dollar invested. Most of them have lost at least half of their net worth. Some of them have lost their entire life savings, a lesson which should never be forgotten by any investor.

If you have any comments on this Forex scam or Trevor Cook and Patrick Kiley and their current activity, you can discuss it on our forum.