Entry and Exit Rules Based on Risk-to-Reward Ratio

It is quite striking how some traders use their ratio as a base for setting either or  of their positions. They usually follow these steps or similar: set to some important chart level, multiply the  in pips by desired ratio, and get the  level from it.

In reality, it should be the other way around. One part of a trading system should dictate the  and  levels dependent only on charts or fundamental indicators. You apply your desired ratio in only one way — you compare it to the one offered by the potential trade and decide whether to enter it or leave it alone. After you have those levels and decide to enter that trade, you apply your money management rules to one variable only — the position size.

Any trader's mindset is composed of these three independent ideas:

A trader may have a number of any other ideas, but they will all boil down to the mentioned three when applied to actual trading process. Of course, any of these three ideas may be absent from trader's mindset, but the resulting outcomes will be unsystematic at best.

As was said earlier, the lack of the first idea leads to random trading. No risk tolerance idea leads to quick loss of the whole account balance or (in rare cases) very slow profit buildup. The lack of minimum RR ratio in a strategy is less rare and destructive but still may lead to risking too much to gain too little.

So, what does it all have to do with mixing ratio with entry and exit rules? Obviously, if you want to keep the ideas independent but connected, and do not want one idea to disrupt one of the two others, you shall not mix them. When you use your idea about minimum RR ratio to position SL or TP of your Forex trades, you are interfering with your idea of price level probabilities. Naturally, some basic entry/exit systems do not allow minimum RR ratio idea at all. For example, if you trade based on moving average crossover only, you will have no idea of proper SL/TP positioning (as you do not know beforehand when the next crossover occurs), unless you do some statistical calculations for median adverse excursion and median favorable excursion before crossover. In case you have such statistics, you can position both SL and TP according to it and trade only when TP/SL ratio fits your idea of good RR ratio. Otherwise, by placing TP or SL solely based on your idea of minimum RR ratio, you would be trying to fit the market for your trading style, which is impossible to do as the market does not care about you.

Here is the diagram illustrating a proper trading decision algorithm: 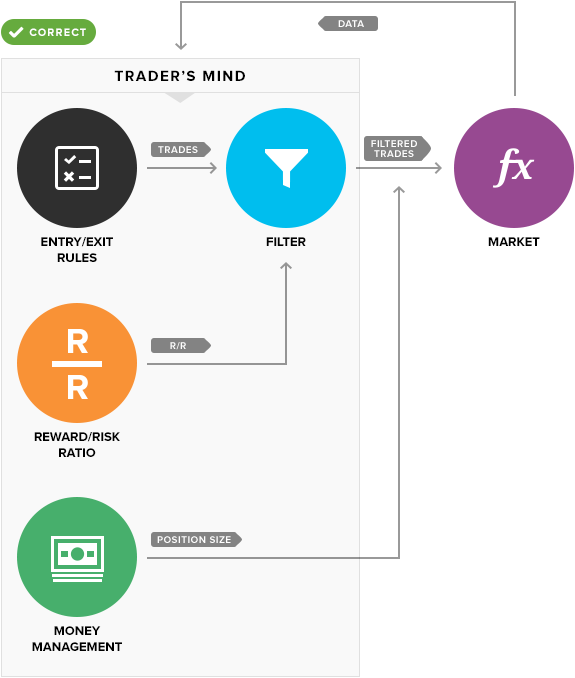 And this one is flawed with the RR ratio affecting position's entry and exit levels: 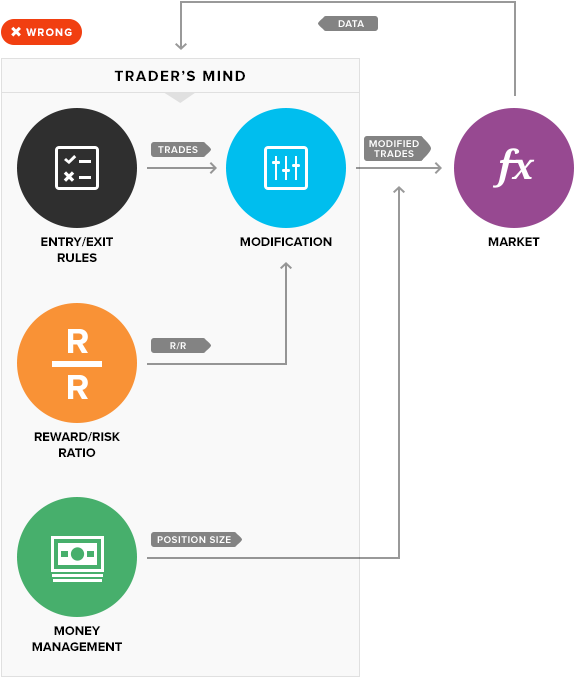 A kind of analogy can be drawn from binary trading. If we translate the idea of basing your entry/exit signals on your ratio into binary options, it would be the same as picking the call with higher strike just because you want to earn more and not because you believe that it is the point the underlying price will rise to.

If you have any questions or wish to express your own opinion on the validity of basing your entry and exit signals on your money management rules, feel free to start a discussion on our Forex forum.