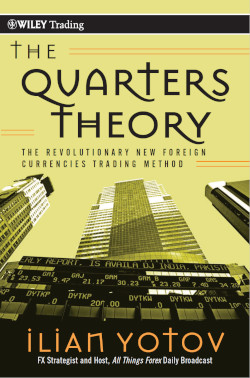 This is not a new book, so the chances are you have probably already read it or at least read about it. The Quarters Theory: The Revolutionary New Foreign Currencies Trading Method was written by Ilian Yotov and published back in 2010, but I have got my hands on it only recently and it took me quite some time to read. It isn't difficult to read in a sense that it isn't a complex book with lots of science in it; it was difficult for me to read because it didn't make much sense and was completely bonkers, with the exception of some sections.

Ilian Yotov is an FX strategist and educator. He also appears on TV and YouTube videos as an expert in trading. Additionally, Ilian is a founder of a trading website — AllThingsForex.com. The Quarters Theory is the author's only published book so far.

Why is it bad?

After struggling through it, I consider The Quarters Theory a really bad book on trading. The main problem is that it presents its main subject, which is the Quarters Theory, as a real deal without providing any evidence. The book just postulates something like this:

Then it simply goes on explaining how orderly are the markets when viewed through the prism of the Quarters Theory and offers neither empirical proof nor theoretical grounds to support the claims.

And since the entire book is based purely on assumptions, and rather bold ones, going through it makes you think that you are just wasting your time. The book isn't fun, there is no value as a work of literature, and it doesn't offer an interesting story to follow — there is no compensation for the lack of trading theory coherence.

Which parts are good?

Still, it was possible to find some good parts in The Quarters Theory. The Chapter 3 (Preparing The Quarters Theory Trades) has two useful sections — Discovering The Fundamental Edge and Identifying The Technical Edge. They both do great job at providing you with the basics on fundamental and technical analysis. They are really good, but that doesn't mean that you should seek this book to read those sections — the information is not exclusive and is available in other books and in free learning content online.

Why is it OK to try?

Despite the lack of statistical evidence for the method presented in the books, it does not seem completely unbelievable, given the predisposition of traders to respect psychologically important levels of whole numbers. So, creating an EA that would exploit this tendency and backtesting it to see if the idea has an edge would be an interesting project. the whole concept of the Quarters Theory Trades on demo account might also be worthwhile, but it would take too much efforts and time in my opinion.

Should you buy it?

My recommendation is not to bother with this book. There are better books on nearly all of the aspects of trading addressed in The Quarters Theory.

If you have any questions or comments, or if you want to express your own opinion regarding The Quarters Theory by Ilian Yotov, please use our Forex forum for this.