Having Trouble Pulling the Trigger on Forex Trades?

Overtrading is a  evil in the world of Forex trading. Its malicious twin — the lack of confidence — is less famous, perhaps, because it does not lead to direct losses, but it can definitely cost traders a lot of money.

Being prevents a trader from entering trades — the execution of the strategy breaks down and the edge is lost. It can happen for a range of reasons. Here are the main three reasons for  in Forex:

The crisis — probably the strongest factors of all. When a trader experiences a big loss or a long series of smaller losses, the emotional pressure may lead to a crisis. It manifests in subconscious reluctance to take trades — any trades at all! A trader suffering from this condition will skip suspiciously looking trade setups, which usually means 99% of them.

Laziness seems like a laughable reason to miss a trade, but it is a real thing for many traders. It usually goes like this: "Looks like a nice trade setup. Need some more analysis to confirm. Oh... I better go do some scalping instead!" Reality is that for many traders, taking some 3–4 extra steps in trade analysis or preparation can be an obstacle to opening a position at all.

is an opposite to the reason described above. Consider a trader with a perfectly working trading strategy. Instead of sticking to it, the trader reads about some new analytical method, which he or she decides to build into his working strategy. As a result, the trader spends more time on  analysis and discards half of the trades that would be totally valid according to the original strategy.

The main effects of being afraid to pull the trigger on trades are rather obvious:

Missing good trades. The most serious consequence is that you stop making money from the trades you would be scoring had you not been . You may think that you only skip the bad trades, but if you do not follow your strategy's rules, the chances are that you are skipping all trades. And if your strategy has some edge, you are skipping more profitable trades than losing ones.

A strategy bias. Skipping some trades means that there is now a bias in your trading. You might be unaware of the factors that make you reluctant to take a particular trade, but in the end, you will see that the diversity of your strategy has suffered and there is now a bias, which can practically kill the effectiveness of the system. The simplest example is the currency pair bias because you are now afraid of taking trades in some particular currency pair after experiencing a series of red trades there. Trading systems depend on diversity — removing one pair from such a system can undermine its performance.

Further emotional downfall. Seeing a missed trade run to a profitable end will inevitably lead to frustration. At the same time, noticing that overall performance did not get any better from extra hesitation will add even more emotional stress. Eventually, more losses will follow, creating a vicious cycle that will call into question the whole idea of trading Forex for you. 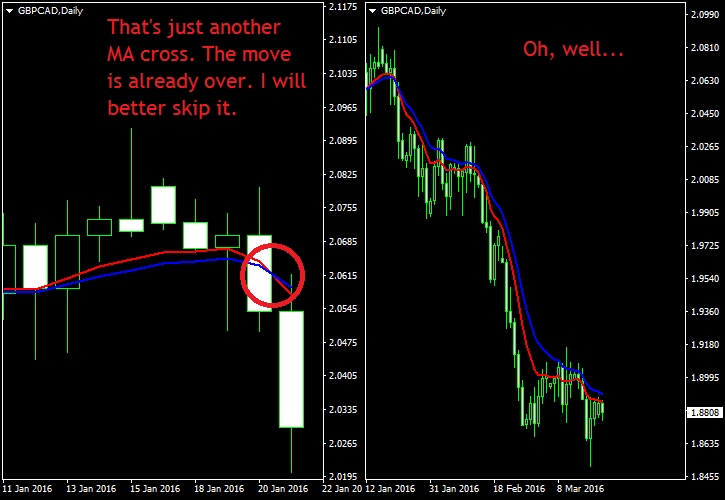 Fortunately, there are three simple steps to remedy the disinclination to take some trades:

If you want to share your opinion on how to cope with trigger-shyness in Forex trading, you can do so on our forum.