The New Zealand dollar is actively falling during morning trading, testing the level of 0.6265 for a breakdown. NZD USD is updating local lows from June 16, reacting to the recovery in demand for the "safe" US dollar, as well as to the aggravation of the geopolitical situation after the Lithuanian authorities announced restrictions on the transit of Russian goods to the territory of Kaliningrad.

Additional pressure on the positions of the trading instrument was exerted by rather weak macroeconomic statistics from New Zealand. Westpac Consumer Survey in Q2 2022 fell from 92.1 to 78.7 points, while analysts expected it to rise to 100 points. Global Dairy Trade index declined 1.3% after gaining 1.5% in the prior period, with only a 0.1% downward correction forecast. The volume of Exports from New Zealand in May rose from 6.16 billion to 6.95 billion dollars; however, against the backdrop of an increase in imports from 5.72 billion to 6.69 billion dollars, the trade deficit in May only increased from –9.29 billion to –9.52 billion dollars. 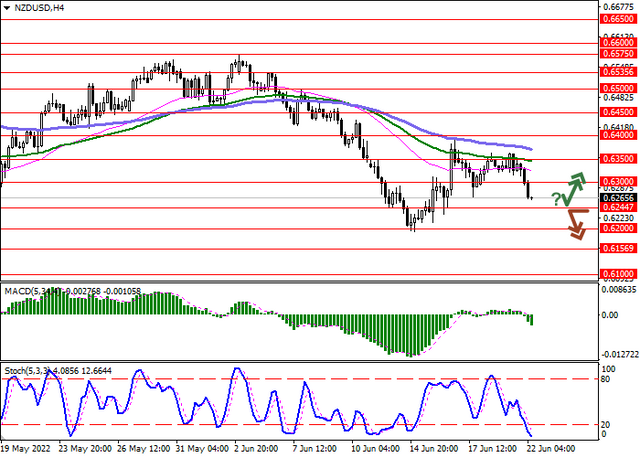 This week, the GBP USD pair attempted to grow, having risen to the area of 1.2323, but today it has lost its position due to the release of negative UK macroeconomic statistics.

The May CPI was 0.7% MoM, slightly higher than the forecast (0.6%), and reached 9.1% YoY, which is a forty-year high. Fuel and food prices increased the most, while the population's purchasing power is declining. Last week, the Bank of England raised interest rates for the fifth time in a row, bringing them to 1.25% but so far, these actions have not had the desired effect. Inflation is increasing and, according to experts, by November, it will be able to exceed 11%, while the tightening of monetary policy increases the risks of a recession.

Under these conditions, the US currency looks more attractive, although the economic downturn due to the “hawkish” monetary policy of the US Federal Reserve also threatens this country. Today, the head of the regulator, Jerome Powell, will address the US Congress with a semi-annual report in which he can outline his vision of the immediate economic prospects and further actions of the department. 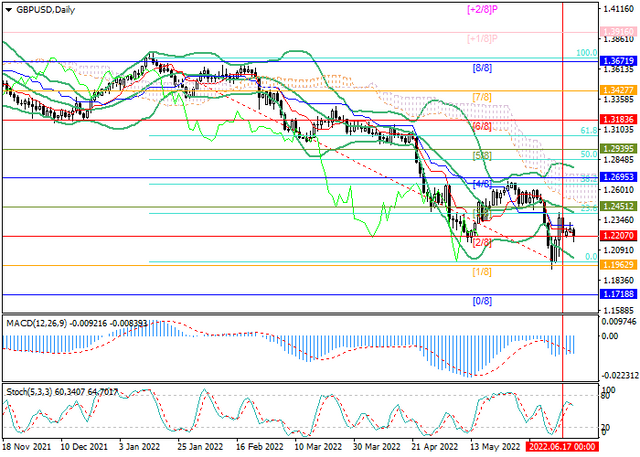 The British pound is trading with multidirectional dynamics against the US currency, consolidating near the level of 1.2260. The day before, GBP/USD also closed with a minimal deviation from the opening levels of the daily session.

Investors are evaluating macroeconomic data from the Office for National Statistics, released yesterday, which reflected an increase in consumer price growth in May: the figure reached 9.1%, which is a record since 1982. The negative dynamics is due to the rapid increase in tariffs for electricity and raw materials in general, which have set a high since 1985, adding 22.1% to the cost against the background of the escalation of the military conflict in Ukraine. At the same time, the monthly inflation rate slowed down from 2.5% to 0.7%, and the Core CPI for the same period decreased from 6.2% to 5.9%, which turned out to be even slightly better than market forecasts of a reduction to 6.0%. In turn, the Retail Price Index in May showed an increase of 11.7%, accelerating from 11.1%, while the forecasts suggested an increase of only up to 11.4%; on a monthly basis, the indicator slowed down from 3.4% to 0.7%, while the market expected a decline to 0.5%. At the same time, according to officials of the Bank of England, consumer price growth may reach 11% by October, exacerbating the crisis in the cost of living for British families. An increase in the interest rate for the fifth time in a row to 1.25% has not yet had the desired effect on the economy, only increasing the risks of a recession. In turn, inflation, taking into account the costs of homeowners for housing maintenance, increased to 7.9% from 7.8% a month earlier. 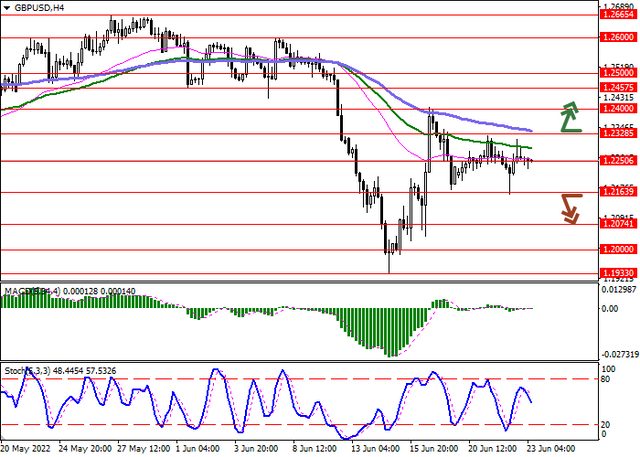 Today, investors are waiting for the publication of statistics on business activity from S&P Global for June. Forecasts suggest that Manufacturing PMI will show a decrease from 54.6 to 53.7 points.

Experts believe that the rapid weakening of the lira is the result of President Recep Tayyip Erdogan's intervention in monetary policy, who insists on lowering interest rates even in the face of rapid inflation, which reached 73.5% in May. So, at the end of 2021, the rate was corrected from 19% to 14%, and, according to the country's leader, this policy will continue soon. It is a powerful driver of the decline of the national currency, the rate of which at the beginning of the week reached the December minimum around 17.3600. Today, the Central Bank of Turkey will announce a decision on the weekly repo auction rate, which has not changed since December 2021. The prospects for monetary policy remain uncertain: it is obvious that a sharp increase in the interest rate should not be expected, while the current measures to combat rising inflation are not enough. Also, rapidly declining foreign exchange reserves are putting pressure on the authorities: last week, they adjusted by 1B dollars and now stand at 7B dollars, forcing the authorities to swap with Saudi Arabia.

Yesterday, at the opening of the daytime session, the US dollar showed an active decline but then quickly regained all lost ground with the support of the speech of the head of the US Federal Reserve, Jerome Powell, in the national Congress, which confirmed the regulator's commitment to the course of further tightening of monetary policy. At the same time, the official did not touch upon the topic of a possible economic recession, which still serves as a strong deterrent for the national currency.

Amazon - The price may grow​

On the daily chart, the third wave of the higher level (3) formed, and a downward correction developed as the fourth wave (4). Now, the formation of the fifth wave (5) has started, within which the first entry wave of the lower level i of 1 of (5) has formed, and a local correction has ended as the wave ii of 1. 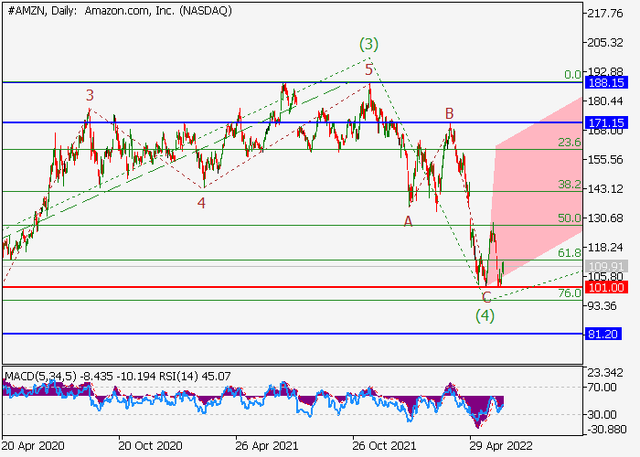 AUD USD - the instrument is consolidating around 0.69​

The Australian dollar shows corrective growth, winning back the losses of the previous two "bearish" sessions. The instrument is again testing the level of 0.6900 for a breakout, receiving support from the growth of corrective moods in the US currency. Investors are in a hurry to fix their profits, and also react to the publication of rather weak macroeconomic statistics from the US.

The data released the day before by S&P Global pointed to a drop in the index of business activity in the US Services sector from 53.4 to 51.6 points, while analysts had expected growth to 53.5 points. The Manufacturing PMI fell sharply from 57.0 to 52.4 points, which also turned out to be significantly worse than the market's expectations of a reduction to 56.0 points. The Composite PMI in June corrected from 53.6 to 51.2 points, while the forecast was at the level of 53.7 points.

Additional pressure on the markets yesterday was exerted by the speech of US Federal Reserve Chairman Jerome Powell in the US Senate, where the official again noted significant risks of expanding inflationary pressure within the country, recognizing the possibility of a recession due to the regulator's "hawkish" position. At the same time, the Fed intends to further tighten monetary policy, trying to return the Consumer Price Index to the target level of 2%. 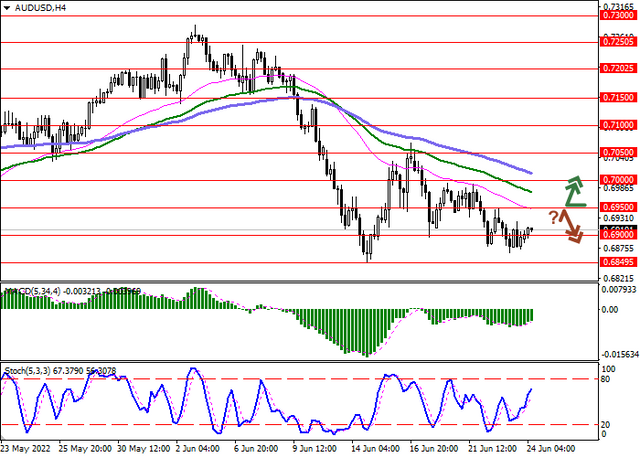 In Australia, against the background of a lack of energy obtained with the help of solar panels and wind generators, a fuel crisis is rapidly developing. Last week, the Australian Energy Market Operator (AEMO) announced it was suspending market and capping wholesale electricity prices until June 23 due to the impossibility of uninterrupted supplies to consumers. Due to the existing deficit, local companies had to buy oil and gas in the spot markets, which contributed to a sharp increase in costs. The government is ready to return to coal-fired infrastructure, as Australian Resources Minister Madeleine King said earlier, noting that the resumption of such enterprises will provide an additional 30% of energy capacity and improve the situation with the energy supply on the east coast.

USD CHF -The US dollar remains under pressure
The US dollar shows a weak corrective growth, trying to recover from a moderate decline for almost the entire week. USD CHF is testing 0.96 for a breakout, remaining close to the local lows of June 3. The pressure on the positions of the US currency remains against the backdrop of the publication of weak macroeconomic statistics from the US the day before, which reflected a quite expected drop in business activity in the Manufacturing and Services sector in June, which turned out to be noticeably worse than analysts' expectations. At the same time, the Initial Jobless Claims for the week ended June 17 showed a slight decrease from 231K to 229K, which was only slightly higher than the expected 227K.

According to a study by The Wall Street Journal, 44% of experts assess the rapid decline of the US economy over the next year as the most likely scenario against the backdrop of current inflation, which has reached a 40-year high. In January, a similar poll showed a result of 18%. Among the main reasons for a possible recession are problems in supply chains, the rapid rise in prices for raw materials, as well as geopolitical tensions caused by the escalation of the military conflict in Ukraine. The negative scenario was also confirmed by Cleveland Fed President Loretta Mester, who noted that the return of the Consumer Price Index to the target level of 2.0% would be a slow process.

Today, investors will focus on statistics from the US on the dynamics of New Home Sales in May, as well as the Michigan Consumer Sentiment Index for June. No noteworthy statistics are expected in Switzerland today, but market participants are closely following the ongoing EU summit, which, among other things, discusses new measures of pressure on Russia in connection with a special military operation in Ukraine. 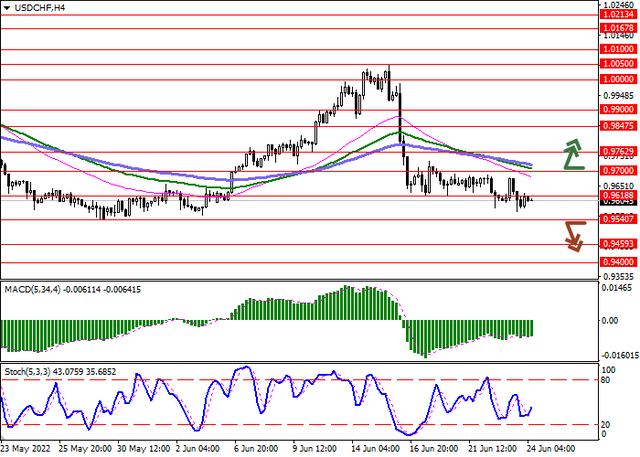 On the D1 chart Bollinger Bands are reversing into the descending plane. The price range is expanding, while remaining spacious enough for the current activity level in the market. MACD is going down preserving a stable sell signal (located below the signal line). Stochastic, being in the oversold area, is trying to reverse upwards, which can be interpreted as a signal to corrective growth of USD in the ultra-short term. 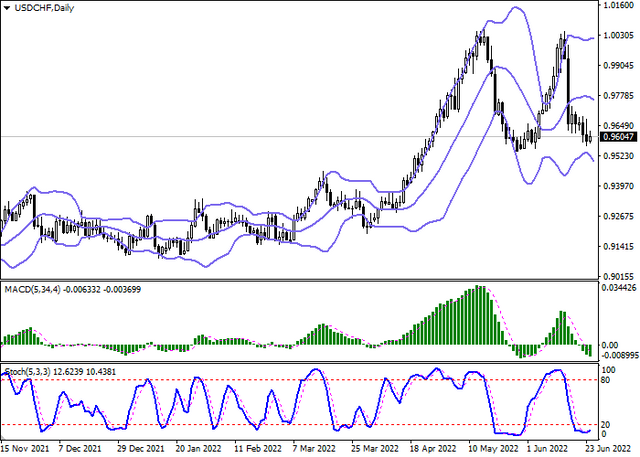