US Treasury Secretary Stephen Mnuchin said he was pleased with the trade negotiations. Inflation in the United States in January was 1.6% in annual terms, which is the minimum increase since June 2017. Core inflation remained at 2.2% year to year for the third consecutive month. Such stability eliminates the likelihood of a Fed rate hike at the next meeting on March 20. Nevertheless the ICE US Dollar Index gained on Wednesday and updated the 3-month high. Investors believe that the Chinese authorities may make some concessions in a trade dispute with the United States. The reporting season of US companies for the 4th quarter of 2018 is close to the end. Market participants believe that the total profit of S&P 500 now it will gain 16.6%, but will decrease by 0.3% in the first quarter of 2019. It limits the potential growth of quotations. Yesterday, after the end of trading, a positive quarterly report was published by the computer company Cisco Systems Inc., so futures on US stock indexes predictably will growth during today's opening. Today at 14:30 CET the weekly data on the labor market will be announced in USA based on producer prices for January and retail sales for December.


The EUR/USD rate again fell below the 1.13 key support level

Industrial production in the Eurozone for December decreased by 4.2% in annual terms, which is noticeably worse than preliminary forecasts. The reduction in the production of fixed assets in industry accelerated to -5.5% year-on-year, compared with -4.4% in November. All this confirms the forecast of the European Commission about the slowdown in the growth of the Eurozone's GDP to 1.3% in the current year compared to 1.9% in 2018. In addition to weak statistics, the negative impact on the EURUSD rate had political problems in the EU. The Spanish Parliament refused to approve the state budget for 2019. However it did not prevent the growth of European stock indices. This was facilitated by good corporate reporting for the 4th quarter of 2018. Market participants expect 3% growth of the total profit of European companies from the STOXX 600 index list. British stock index FTSE 100 updated 4-month high due to a fall in inflation in January to a 2-year low. Today Eurozone GDP for the 4th quarter will be published.

Japanese exporting companies quotations strengthening contributes to the weakening of the yen. USDJPY also gained the 4th day in a row and has already updated the 7-week maximum. Honda Motor shares gained 1.3% and Advantest Corp 1.6%. New Zealand and Australian dollar got additional impetus to strengthen due to the publication of Chinese macroeconomic data. China is the main trading partner of these countries. In January, Chinese exports and trade surplus significantly exceeded forecasts.


Quotations of Brent significantly lose and updated a maximum of 2019
The oil prices increase is due to the optimism of market participants about the possible successful outcome of the US-China trade negotiations. In this case, the world economy may receive an additional impetus to development due to the cessation of trade wars. China reported an increase in oil imports in January of this year to 10.03 million barrels per day (bvd). This is 4.8% more than in January 2018. Chinese oil imports exceed the psychological level of 10 million USD for the third month in a row. IEA agency expects an increase in global consumption during current year by 1.4 million bvd, which implies the stability of demand. 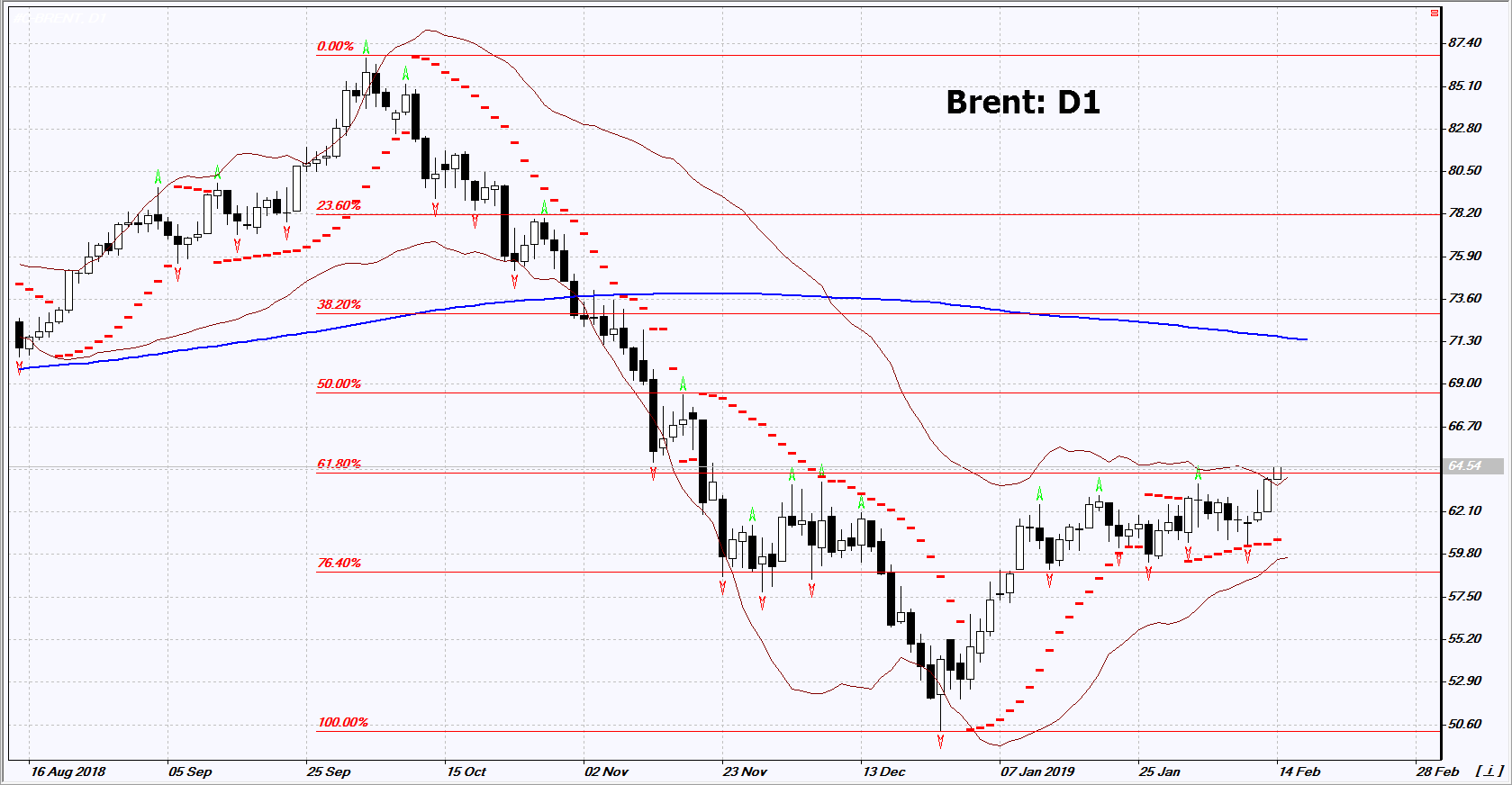 US stocks continue rising in anticipation of trade negotiations with China