Halting interest rate hikes this year by the Fed is bullish for gold. Will the gold price continue rising?

Federal Reserve’s dovish stance hurts US dollar, making gold more affordable and attractive for investors. At a conclusion of March meeting yesterday the Fed cut the projection of the number of interest rate hikes expected this year to zero from the two forecast in December. This is clearly dovish for the dollar. At the same time policymakers indicated in Fed’s statement that continued US economic growth remains “the most likely” scenario for the US, supporting demand for risky assets - stocks. Continued strength in US stock prices is the major risk for gold. Thus, positive recent data attest to continued strength of US economy while reports US Trade Representative Lighthizer and Secretary of Treasury Mnuchin will visit Beijing next week indicate US and China are in the final stages of trade negotiations. Durable goods orders increase together with construction spending in January were above forecast. The consumer price index rose 0.2% on month in February after three months of no change. Retail sales rose above expected 0.2% over month January, after downwardly revised 1.6% drop in December. And factory orders growth was steady in January. The Federal Reserve decision indicating dovish turn in central bank monetary policy is bullish for gold prices. 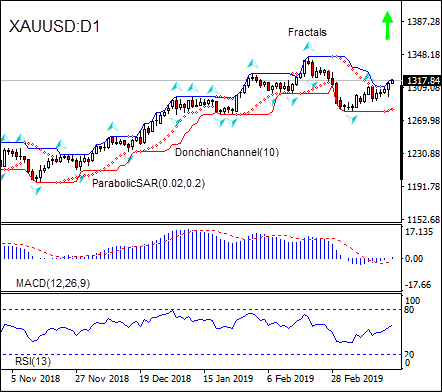 On the daily timeframe the XAUUSD: D1 has been retracing higher after hitting seven-week low in the begging of March.

We believe the bullish momentum will continue after the price breaches above the upper boundary of Donchian channel at 1319.18. This level can be used as an entry point for placing a pending order to buy. The stop loss can be placed below the lower Donchian boundary at 1280.73. After placing the order, the stop loss is to be moved every day to the next fractal low, following Parabolic signals. Thus, we are changing the expected profit/loss ratio to the breakeven point. If the price meets the stop loss level (1280.73) without reaching the order (1319.18), we recommend cancelling the order: the market has undergone internal changes which were not taken into account.