The next round of US-China trade talks is expected
Representatives of the United States and China held talks regarding the conclusion of the first phase of a trade deal. Will the NZDJPY rise?
Such a movement is observed in case of the strengthening of the New Zealand dollar and weakening of the Japanese yen. China is the most important trading partner of New Zealand. In case of successful completion of a trade dispute with the US, its economy may get an extra boost for development, which will increase the demand for New Zealand raw materials and goods. In turn, the Japanese currency is a "safe-haven asset." Demand for it decreases in case of a reduction in global foreign trade risks and conclusion of an interim agreement between China and the US. At the end of last week, the Chinese leadership invited U.S. Trade Representative Robert Lighthizer and Treasury Secretary Steven Mnuchin to negotiate in Beijing. Retail sales for October will be released in Japan on November 28, and unemployment and industrial production data for October and inflation in Tokyo will come out on November 29. These indicators may affect the exchange rate of the yen. The New Zealand trade balance for October will be released on November 27, and the economic review of the National Bank of New Zealand will come out on November 28. 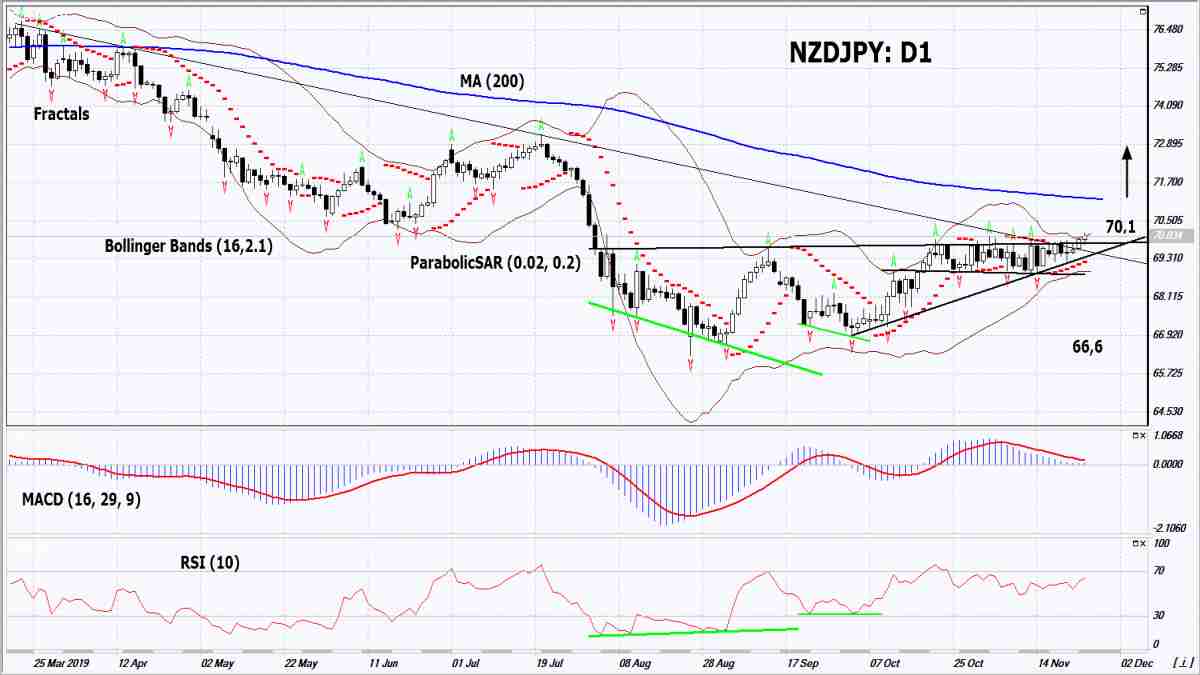 On the daily timeframe, NZDJPY: D1 breached up the resistance line of the downtrend and moved into an uptrend. A number of technical analysis indicators formed buy signals. The further price growth is possible in case of positive news about US-China trade talks.
The bullish momentum may develop in case NZDJPY exceeds the 4 last fractal highs and the upper Bollinger band at 70.1. This level may serve as an entry point. The initial stop loss may be placed below the October low, the Parabolic signal and the lower Bollinger band at 66.6. After opening the pending order, we shall move the stop to the next fractal low following the Bollinger and Parabolic signals. Thus, we are changing the potential profit/loss to the breakeven point. More risk-averse traders may switch to the 4-hour chart after the trade and place there a stop loss moving it in the direction of the trade. If the price meets the stop level (66.6) without reaching the order (70.1), we recommend closing the position: the market sustains internal changes that were not taken into account.
Summary of technical analysis