UK economic data have been mixed recently: retail sales growth in the UK was little changed in February, ticking to 4% over year from 4.1% in January. The expectations were retail sales growth would slow to 3.3%. Reports a week later indicated mortgage approvals in February and realized sales in March declined more than forecast. However the technical setting indicates upside momentum for UK stock market. At the same time a couple days ago the British parliament voted on eight different Brexit alternatives Wednesday but none received the majority support, increasing the likelihood of a hard Brexit. The economic and political uncertainty of the terms of UK’s departure from the European Union remains an unresolved downside risk for UK economy. 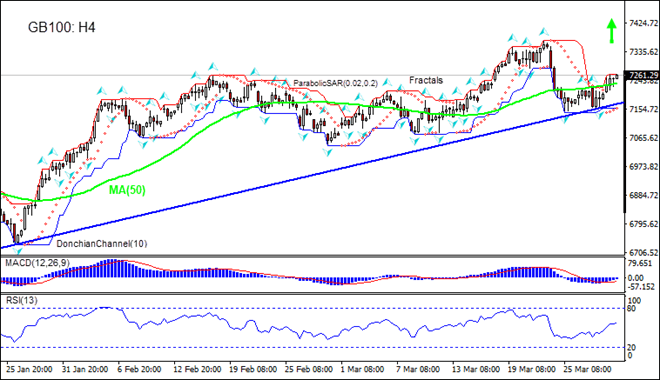 On the daily timeframe GB100: H4 is rising after bouncing off support line. It has breached above the 50-day moving average MA(50). These are bullish developments.

We believe the bullish momentum will continue after the price breaches above the upper Donchian boundary at 7254.37. This level can be used as an entry point for placing a pending order to buy. The stop loss can be placed below the lower fractal at 7151.73. After placing the pending order the stop loss is to be moved every day to the next fractal low, following Parabolic signals. Thus, we are changing the expected profit/loss ratio to the breakeven point. If the price meets the stop-loss level (7151.73) without reaching the order (7254.37) we recommend cancelling the order: the market sustains internal changes which were not taken into account.