Investor sentiment in euro-zone’s largest economy improved: German ZEW investor sentiment index for the country improved to 3.1 in April, up from -3.6 in March. It was better than an expected reading of 0.8. Last Friday Eurostat upgraded euro-zone’s industrial production for February, reporting a reading of just 0.2% on month decline instead of 0.5% contraction. Better investor sentiment is bullish for euro. While euro-zone struggles to overcome the negative effects of last recession, the opening of new possible trade war front after US threatened to levy tariffs on $11 billion of EU products is a downside risk for euro. Chances are US and European Union will reach a solution which will not impede transatlantic trade. 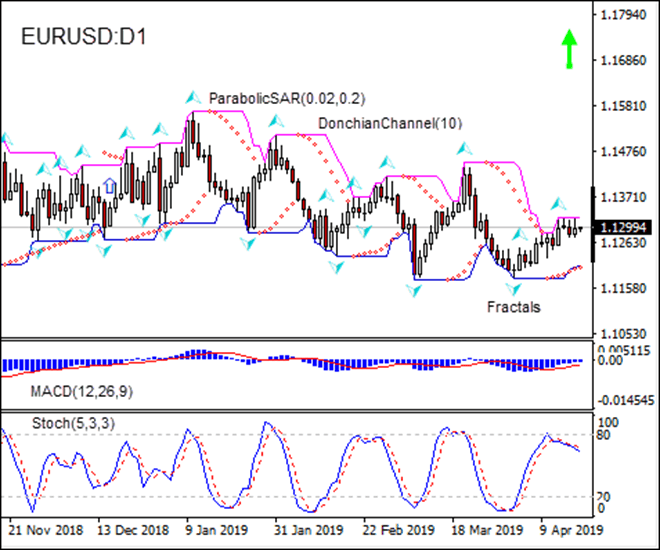 On the daily timeframe EURUSD: D1 is retracing after it hit 5-week low in the beginning of April.

We believe the bullish momentum will continue after the price breaches above the upper Donchian boundary at 1.1323. A price point above that level can be used as an entry point for a pending order to buy. The stop loss can be placed below the lower Donchian bound at 1.1206. After placing the pending order the stop loss is to be moved every day to the next fractal low, following Parabolic signals. Thus, we are changing the expected profit/loss ratio to the breakeven point. If the price meets the stop-loss level (1.1206) without reaching the order we recommend cancelling the order: the market sustains internal changes which were not taken into account.