The shares of Bank of America, the largest financial conglomerate in the US, are moving within the corrective trend of around 34.

On the daily chart, the price has left the global downward channel with dynamic boundaries at 27 – 33 and is trying to stay within the corrective trend that began after overcoming the initial 23.6% Fibonacci correction at 34.7. On the four-hour chart, it is seen that the upward impulse has high prospects for implementation. However, they are relevant only after the quotes reconsolidation above 34.70. 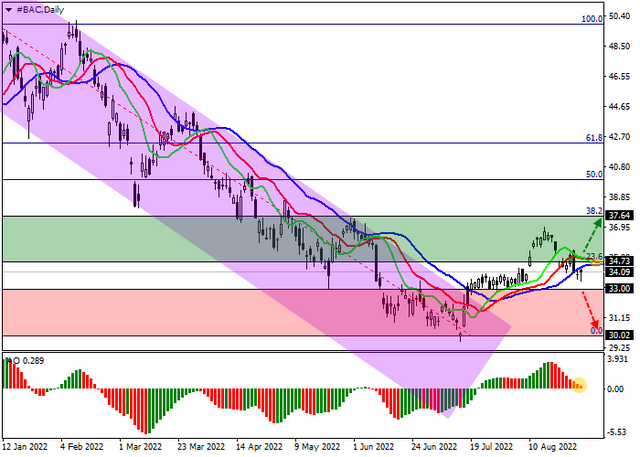 Technical indicators keep a buy signal: indicator Alligator’s EMA oscillation range is directed upwards, although it is narrowing, and the histogram of the AO oscillator forms downward bars in the buying zone.​

Inflation in the UK reached 10.1% in annual terms, and the Nationwide house price index in August was 10.0%, and over the winter period, according to many analysts, they can grow even more. In addition, the yield of 10-year British bonds increased by more than 90 basis points, and 2-year securities — by 100 basis points.

An additional negative factor for the pound remains the political uncertainty caused by the election of a new leader of the Conservative Party and the Prime Minister of the country. Foreign Minister Liz Truss and former Chancellor of the Exchequer Rishi Sunak are running for the post, and the name of the winner will be announced early next week. The reaction of the British currency to the results can be unpredictable, so investors are currently continuing to monitor the rhetoric of both candidates.

In turn, the USD is strengthening due to the tightening of the monetary policy of the US Fed. Investors' attention will be focused on the August data on changes in the number of people employed in the non-agricultural sector, which will be published on Friday at 14:30 (GMT+2). It is expected that the indicator will be adjusted from 528.0K to 300.0K. If the actual value turns out to be close to the forecast or exceeds it, then the USD is likely to continue to strengthen. 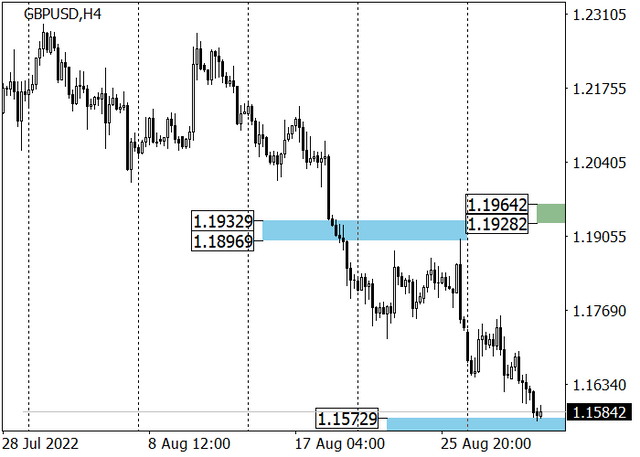 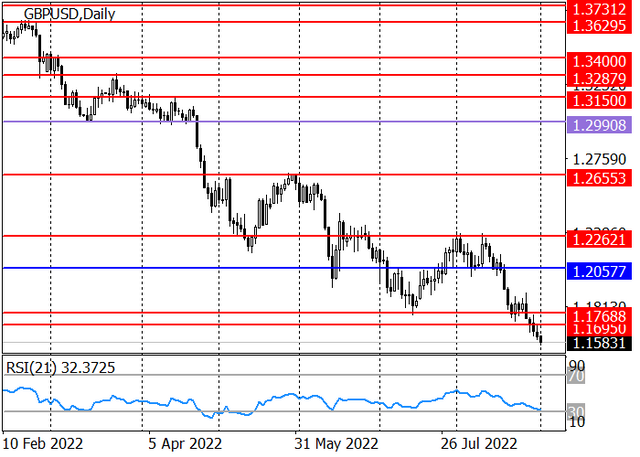 On the daily chart, a global Triangle pattern with dynamically narrowing boundaries at 185 – 217 is developing, and at the moment, the price is heading towards the support line. On the four-hour chart, it is seen that the even down wave has a high potential for implementation since the only serious obstacle in the form of support around 200 has already been overcome by now, and quotes have headed towards the support line around 185. 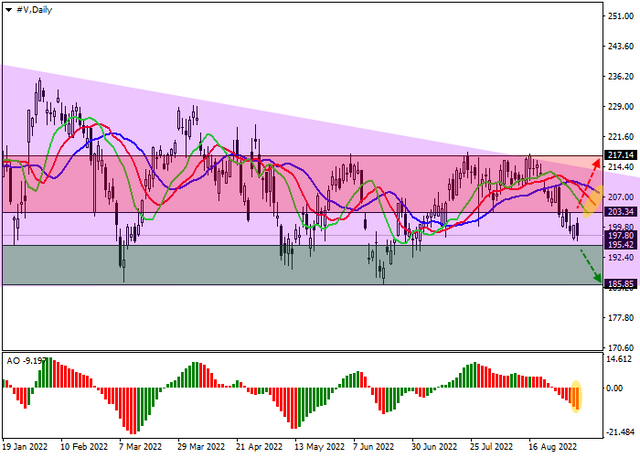 The asset loses value after the publication of data on household spending, reflecting a decrease of 1.4% in monthly terms. Nevertheless, tomorrow the direction of movement of quotations may change after the statistics on the gross domestic product (GDP) of Japan are presented. Preliminary estimates are quite optimistic: analysts assume that the indicator will add 0.7% in Q2, thereby supporting the growth of annual GDP by 2.9% compared to the previous estimate of 2.2%. 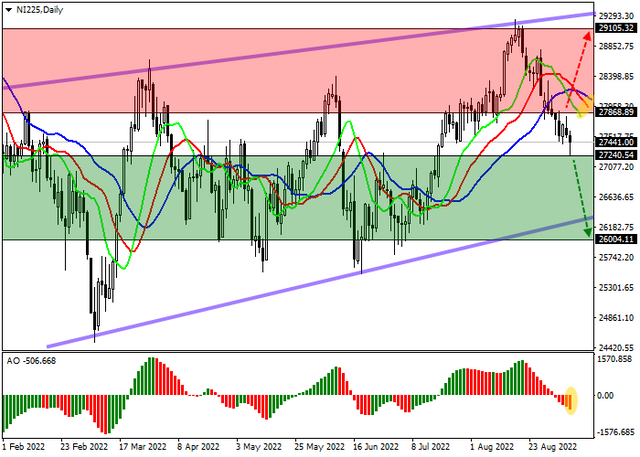 On the daily chart of the asset, the price remains within the local ascending channel, declining in the direction of the support line. Technical indicators have already reversed and issued a sell signal: the histogram of the AO oscillator is declining in the sales zone, forming new descending bars, and the fast EMAs on the alligator indicator are below the signal line.

Shares of Walmart, the US company that operates the world's largest wholesale and retail chain, are moving around 135.

On the daily chart, after reaching the support line at 130, the price reversed and began to correct, forming a local channel with boundaries of 130–145. On the 4-hour chart, the uptrend has a high chance of continuation as the underlying Fibonacci 38.2% retracement at 134.20 was easily overcome. The next resistance is an intermediate Fibonacci 50.0% correction at 139.3, which will become the target for local growth. Technical indicators confirm the upward momentum: fast EMAs on the Alligator indicator are above the signal line, and the AO oscillator histogram has formed an upward bar in the buying zone.​

On the daily chart, the correction is developing within a wide corridor with dynamic boundaries of 350 – 290.

On the four-hour chart, after reaching the support line, the quotes reversed upwards, breaking the initial correction level of 23.6% Fibonacci around 298. Holding the trading instrument above it is a key factor for the continuation of the upward trend, the target of which is the Fibonacci 61.8% retracement level at 315. 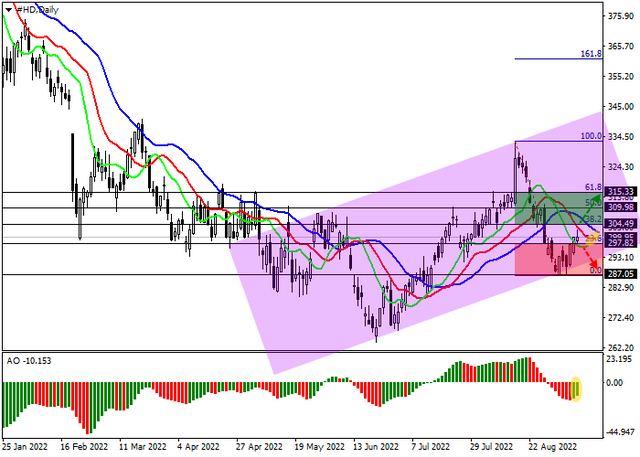 Shares of Pfizer, the largest US pharmaceutical company, are trading around 48. On the daily chart, a global corrective trend is forming, and the price is clamped within the Triangle pattern with dynamic boundaries of 45 – 51.

On the four-hour chart, it is seen that the local decline ended with the support line at 45, after which a reversal was formed, and the quotes of the trading instrument are heading towards the resistance line at 50.3. Taking into account the lengths of local waves, the moment of the pattern implementation will not come soon, and the asset is expected to decline after the end of the current upward impulse. 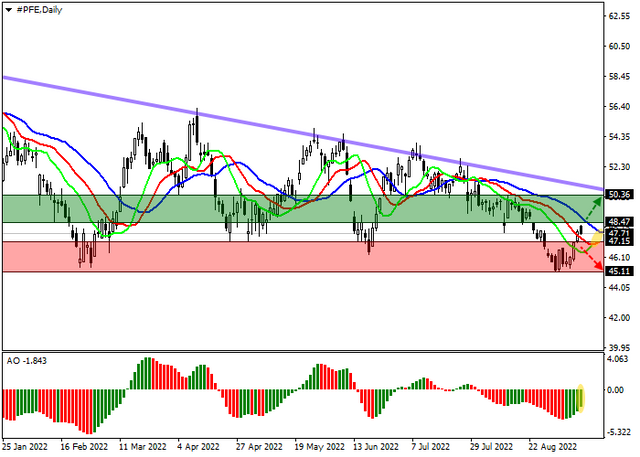 At the moment, fast EMAs on the Alligator indicator are approaching the signal line, and the AO oscillator histogram is forming up bars in the sell zone.​

In turn, the Australian labor market shows positive results, which, however, could not reverse the current trend in the asset: the total number of jobs in Q2 increased by 2.5% to 15.5M, and the number of filled vacancies — by 2.2%, amounting to 15.0M, while the share of unfilled positions reached 3.1%. The number of residents of the country occupying several jobs also increased to 898.9K, exceeding the figure of Q1 by 4.3%. 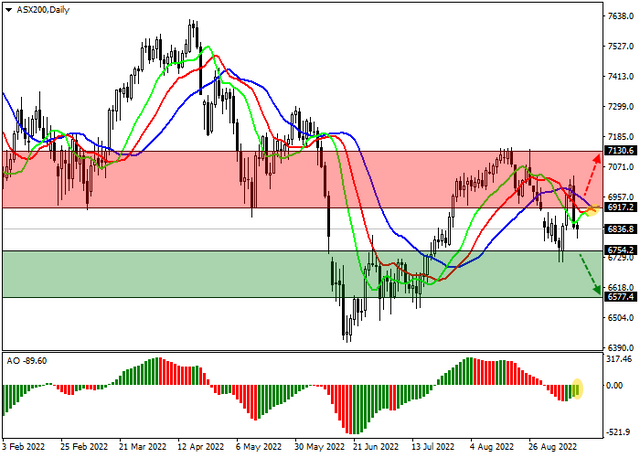 The asset is held in the ascending channel, having reached the support line. Technical indicators have reversed and given a signal for the start of active sales: the fast EMAs of the alligator indicator are below the signal line, and the histogram of the AO oscillator forms ascending bars while being deep in the sales zone.

On the daily chart, the quotes remain within the global Expanding formation pattern, forming a new downward wave, which has already almost reached its intermediate target at the 61.8% Fibonacci full retracement around 146. On the four-hour chart, it can be seen that the current movement is developing according to the classical structure. After rebounding from the initial correction of 23.6% Fibonacci around 163.8, the price continued its global decline, almost breaking the intermediate correction of 50.0% Fibonacci around 151.50, which is key support for the current trend. Nasdaq 100 - The US stock market continues to decline​

One of the world's leading express delivery companies, FedEx Corp., published a preliminary report on the results of the first quarter of fiscal year 2023, saying that its revenue in the period from June to August could fall to 23.2 billion dollars, which is 300.0 million dollars below the forecast. In turn, earnings per share will be around 3.33 dollars, well below the forecast of 5.14 dollars. In addition, the Chief Financial Officer of General Electric Co. Carolina Dybek Happe said that problems in the supply chains of goods remain, and this can have a negative impact on the company's performance in the current quarter. 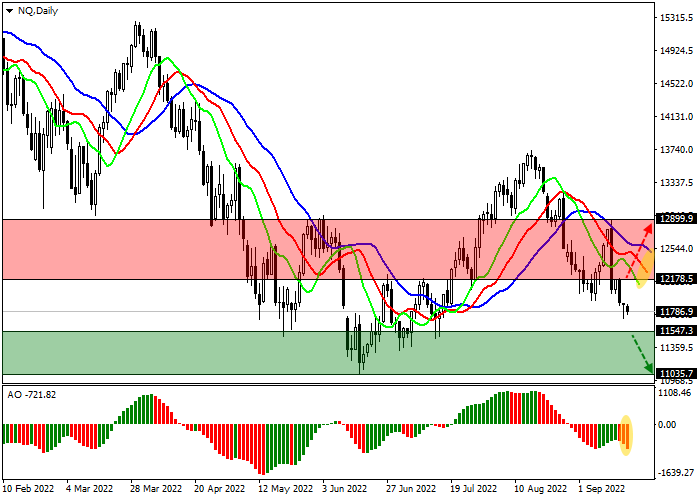 The index quotes are trading within the wide downward channel, declining towards the support line. Technical indicators maintain a steady sell signal: fast EMAs on the Alligator indicator are moving away from the signal line, and the AO oscillator histogram has formed several new descending bars.

The day before, the Association of German Banks (BDB) published an updated forecast for the economic development of Germany, which turned out to be much worse than previous estimates released in the spring. The Association assumes that Germany's Gross Domestic Product (GDP) will increase by 1.4% in 2022 (previously expected to grow by 2.2%), and consumer prices could add 8.0% this year and 6.2% in 2023. In addition, the forecast for Household Spending is also pessimistic, which could rise by 3.3% this year and then decline marginally by 1.2% next year. 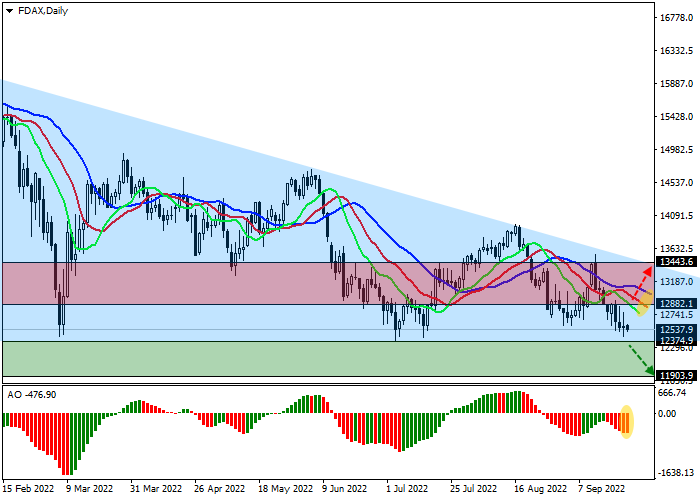 On the daily chart of the asset, the price is trading within a Triangle pattern, approaching the support line. Technical indicators have already reversed to the downside and are strengthening the signal: fast EMAs on the Alligator indicator are moving away from the signal line, and the AO oscillator histogram, having moved to the sell zone, continues forming descending bars.

The upward dynamics in the domestic bond market continues. Today, auctions will be held to place short-term bills, the rate on which may exceed the previous one. In turn, the popular 10-year bonds are trading at a rate of 2.597%, exceeding the 2.442% shown last week. Global 20-year securities continue to grow, and the rate on them exceeded the peak values of mid-summer at the level of 2.724%, amounting to 2.754%. 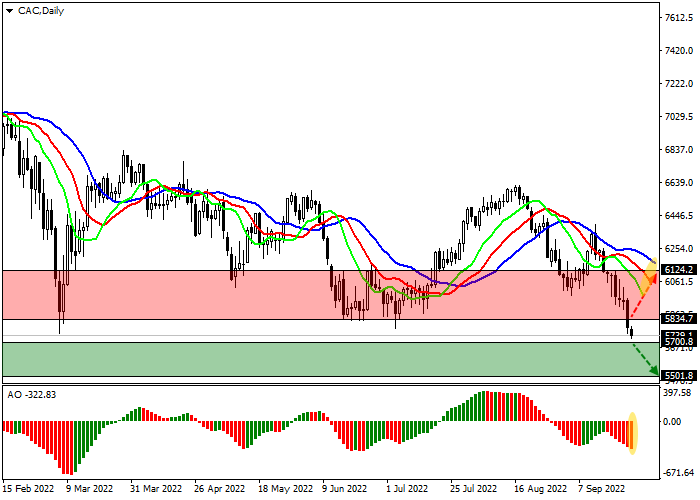 Quotes of the asset continue to show an active decline. Technical indicators strengthen the sell signal: fast EMAs on the Alligator indicator are moving away from the signal line, and the AO oscillator histogram, being in the sell zone, continues to form descending bars.

Despite the fact that the leading stock indicators of the Eurozone showed strong growth in yesterday's trading, the German market index was able to interrupt its global decline only briefly, and now the DAX 40 is correcting down, trading at 12140.

The upward dynamics was a reaction to the rhetoric of the President of the European Central Bank (ECB) Christine Lagarde, who announced an increase in interest rates at at least three subsequent meetings of the regulator. At the same time, the GfK Group published October data on the indicator of Consumer Confidence in Germany, which is the leading indicator. The value turned out to be the worst in the history of observations, dropping to -42.5 points from -36.8 points in September, which was the main reason for the negative dynamics of the DAX 40 index. 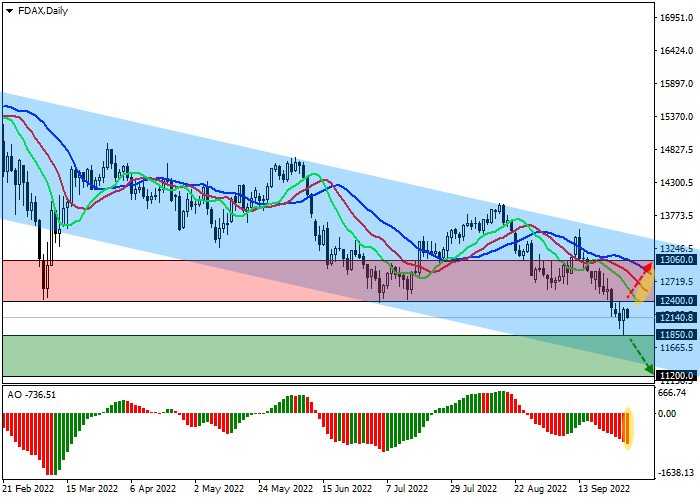 On the daily chart of the asset, the price is trading within the global descending channel, falling towards the support line. Technical indicators have been holding a sell signal for a long time: fast EMAs on the Alligator indicator are moving away from the signal line, and the AO oscillator histogram, having moved into the sell zone, continues to form downward bars.