Futures slip ahead of jobs report

US stocks recover led by oil shares propped by Trump tweet on expected crude output cut
US stock market rebounded on Thursday as optimism on rallying oil prices after President Trump tweeted Saudis and Russia would cut production by about 10 million barrels per day offset concerns about downturn in economy ahead of expected dismal jobs report. The S&P 500 rose 2.3% to 2526.9. erasing over half of previous session loss. The Dow Jones industrial average advanced 2.2% to 21413.44. Nasdaq composite index rebounded 1.7% to 7487.31. The dollar strengthening continued at previous pace despite report more than 6.6 million Americans filed for unemployment insurance for the first time last week doubling the previous week’s record: live dollar index data show the ICE US Dollar index, a measure of the dollar’s strength against a basket of six rival currencies, rose 1.4% to 100.09 and is higher currently. The labor market report due today is feared to show massive job losses caused by businesses shutting down due to the coronavirus pandemic.. Futures point to lower market openings today.

Nikkei edges up while Asian indexes retreat
Asian stock indices are mostly lower today after solid gains on Wall Street staged by rally in energy shares. Nikkei ended marginally higher adding 1.5 points to 17820.19 as yen continued sliding against the dollar. Markets in China are falling despite Caixin report services PMI rebounded in March: the Shanghai Composite Index is down 0.6% while Hong Kong’s Hang Seng Index is 0.5% lower. Australia’s All Ordinaries Index pulled fell 1.7% despite the Australian dollar’s continued slide against the greenback. 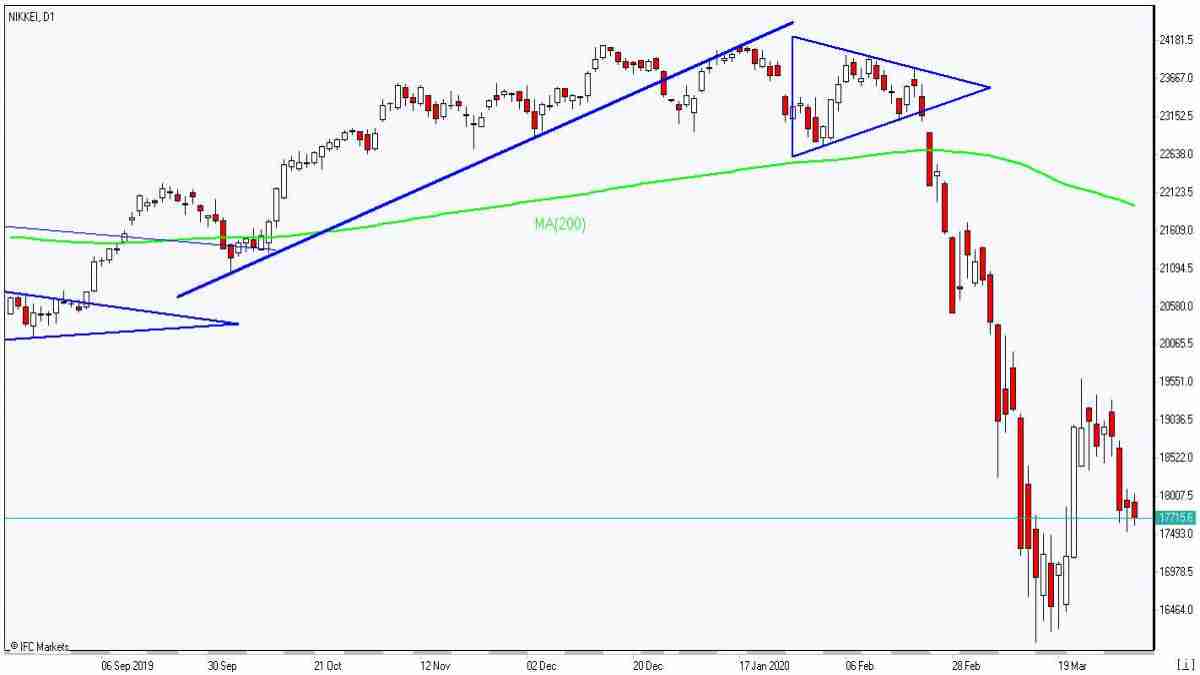 Brent advances
Brent futures prices are extending gains today. Prices jumped yesterday after President Trump tweeted that he expected a cutback of “approximately 10 Million Barrels, and maybe substantially more” in crude oil output by Saudi Arabia and Russia. Saudi Arabia news agencies reported the kingdom had called for an “urgent” meeting of the Organization of the Petroleum Exporting Countries and major producers to discuss restoring “ a desired balance of the oil markets.” The crude output curbing agreement between the Organization of the Petroleum Exporting Countries and non-member allies such as Russia expired on March 31. June Brent crude surged 21% to $29.94 a barrel on Thursday.

Futures up ahead of Good Friday