Futures down even as US stimulus package passes Senate vote

Dow logs back to back gains
US stock market posted back to back gains on Wednesday. However indexes ended off daily maximums as few Senators said they wanted amendments to be made to $2 trillion economic rescue package before they would vote for it. The S&P 500 gained 1.2% to 2475.56. The Dow Jones industrial average rose 2.4% to 21200.55, first back to back gain since February 6. Nasdaq however slipped 0.5% to 7384.30. The dollar weakening continued despite report the durable goods orders jumped 1.2% in February when 1% decline was expected. The live dollar index data show the ICE US Dollar index, a measure of the dollar’s strength against a basket of six rival currencies, fell 0.6% to 100.99 and is lower currently. The Senate passed the coronavirus bill later Wednesday, which is expected to provide $1,200 direct payments to many Americans, offer more than $360 billion in loans to small businesses and $500 billion to industries, cities and states. Futures point to lower market openings today.

CAC 40 led European indexes advance
European stocks also booked successive gains on Wednesday despite weak economic reports. The EUR/USD and GBP/USD continued their climbs yesterday, with both pairs higher currently. The Stoxx Europe 600 ended up 2.5% led by energy shares. Germany’s DAX 30 added 1.8% to 9874.26 despite an Ifo Institute for Economic Research report the business sentiment in Germany suffered its steepest fall in March since the country’s reunification in 1990. France’s CAC 40 advanced 4.47% while UK’s FTSE 100 rose 4.45% to 5688.20 as consumer inflation ticked lower to 1.7% in February from 1.8% in January.

Australia’s All Ordinaries Index up while Asian indexes slump
Asian stock indices are mixed today after Dows first back-to-back gain in 7 weeks overnight. Nikkei fell 4.5% to 18664.60 as yen accelerated its climb against the dollar. Markets in China are falling: Shanghai Composite Index is 0.6% lower while Hong Kong’s Hang Seng Index is down 1.2%. Australia’s All Ordinaries Index however rose 2.3% despite Australian dollar’s resumed climbing against the greenback. 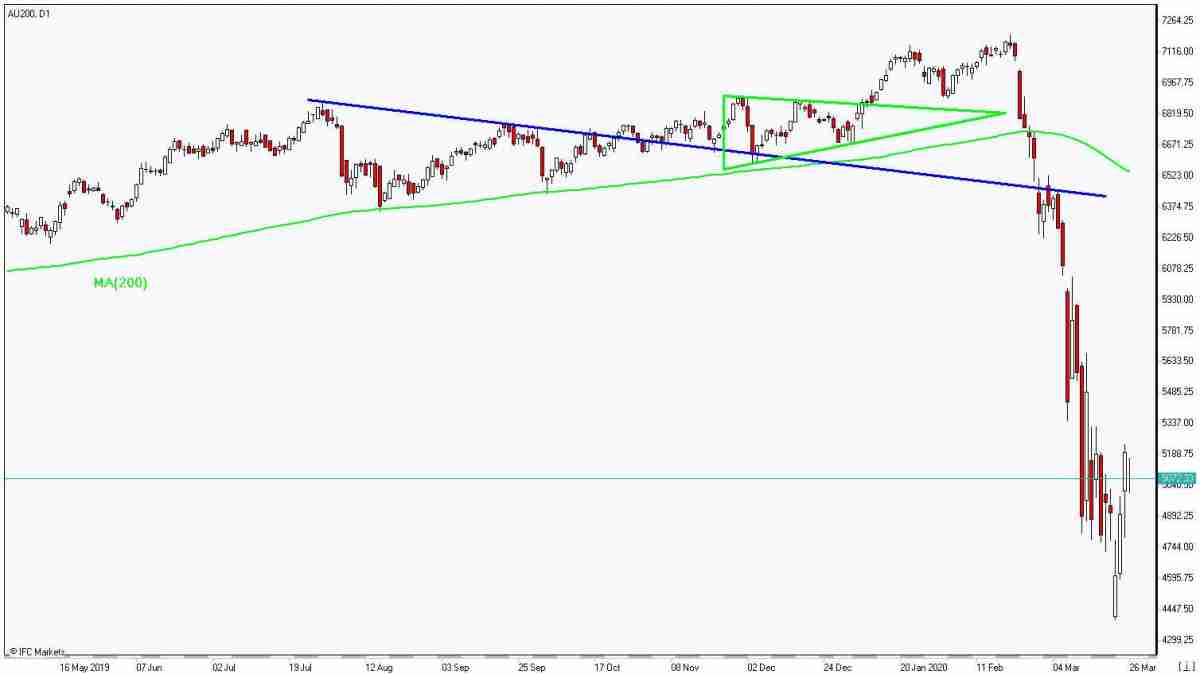 Brent down after ninth weekly build in US crude inventory
Brent futures prices are pulling back today. Prices rose yesterday as the Energy Information Administration reported US crude oil inventories rose by smaller than expected 1.6 million barrels last week, nineth weekly rise in a row: May Brent added 0.9% to $27.39 on Wednesday.

US stocks end mixed in first day of Senate impeachment

Futures rise as US administration signals coronavirus outbreak may be stabilizing