EURUSD: correction ahead of the FOMC meeting

On Tuesday the 12th of December, trading on the euro/dollar pair closed down. The pair spent most of yesterday around the LB balance line (sma 55) at 1.1770. The rate then took a sharp dive after the publication of the producer price index in the US. The year on year value came out higher than expected to give investors more sleepless nights over the country’s low level of inflation.

The euro dropped to 1.1718 on the back of a rising dollar and US 10Y bond yields. After trading in Europe closed, the euro started to mount a recovery. 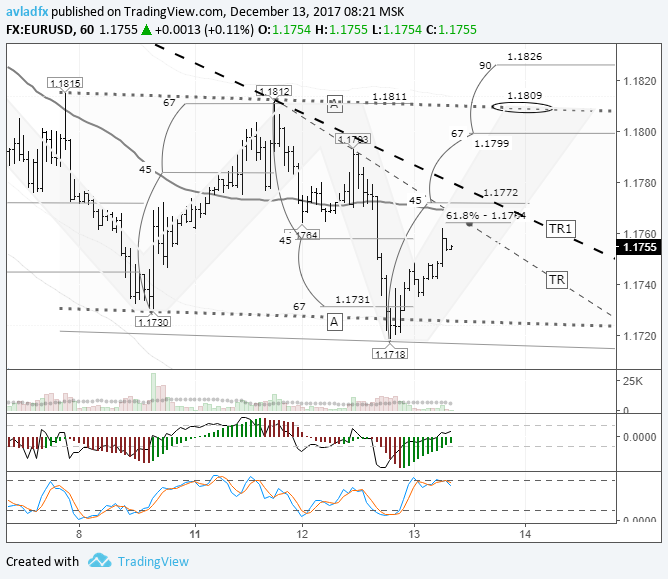 My expectations of a rise to 1.1811 didn’t come to pass. US data got in the way. The increase in producer inflation sent the euro down to 1.1718.

The pair has rebounded from the lower boundary of the A-A channel and as of now has recovered around 60% of yesterday’s losses. At the time of writing, the euro is trading at 1.1758 against a session high of 1.1762.

Now let’s look at the technicals imposed on the hourly chart. The rate has recovered from 1.1718 to 1.1762. The breakout of the A-A channel turned out to be false. A W-model is now forming. For it to complete its formation, we need to break out of the TR and TR1 lines.

Three euro crosses, including the EURGBP, are trading up. With the support of these pairs, buyers should be able to reach 1.1775 quite comfortably. Whether or not they can go higher remains to be seen as markets are holding their breath ahead of the Federal Reserve’s interest rate decision. Since most traders are convinced of a 25-base-point increase, more attention will be given to the Fed’s economic forecasts and Janet Yellen’s press conference. This will be Yellen’s final meeting and press conference as her term expires on the 3rd of February, 2018.
Source: https://alpari.com/en/analytics/reviews/market_sessions/23557_13122017/
Toggle signature
All is possible!!
Show hidden low quality content

F
Euro in correction down or downtrend?