Pound and euro were pressured by UK government release of the first round of documents detailing the expected impact of a “no-deal” Brexit, when the final deadline of March 2019 for the UK exit could pass without any trade agreement ratified. It was deemed as a signal that London is serious about walking away from talks if it doesn’t get a satisfactory agreement with the European Union. In economic news the declines of preliminary manufacturing purchasing managers indexes for euro-zone and Germany in August showed factory activities expansions in the area and Europe’s largest economy slowed more than expected. However expansion in Germany’s services sector accelerated.

Asian indices mixed as US-China talks end without progress
Asian stock indices mixed today with trade tensions still in focus as trade talks between mid-level US and Chinese officials ended on Thursday without any sign of major progress. Nikkei ended 0.9% higher at 22601.77 helped by slowing yen slide against the dollar. Chinese stocks are higher after China’s finance minister said government would increase its spending to support workers and also predicted bond issuance by local governments to support infrastructure investment this year: theShanghai Composite Index is 0.2% higher while Hong Kong’s Hang Seng Index is down 0.5%. Australia’s All Ordinaries Index rebounded 0.05% while Australian dollar turned higher against the greenback. 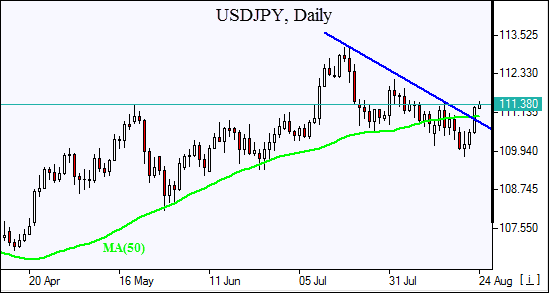