The main support for the entire cryptocurrency sector was provided by monetary factors. After the release on Thursday of the December data on US consumer inflation, which recorded a new slowdown in its growth rate from 7.1% to 6.5% on an annualized basis, investors became stronger in the opinion that the US Fed will also adjust the rate of interest rate hike to 25.0 percentage points, putting pressure on the quotes of the national currency. As a result, the positions of alternative assets, including digital ones, have strengthened. It should be noted that the current trend is in line with the forecasts of the well-known crypto enthusiast, the head of Galaxy Digital, Michael Novogratz, who at the beginning of last year said that the digital asset market would restore positive dynamics after the American regulator retreats from the policy of sharp monetary tightening. Further positive for the sector was the news that the FTX bankruptcy team was able to restore access to the company's assets of about 5.0B dollars, which could provide investors with a significant part of the losses.

However, despite a number of positive factors, the further recovery of BTC positions does not look sustainable, as the position of the cryptocurrency industry as a whole remains difficult. The decline in trading volumes on the leading centralized exchanges continues, in December alone, the number of spot trading decreased by 42.8% at once, and of futures – by 47.6% compared to November. The difficult financial situation caused by a protracted fall in prices last year is forcing companies to optimize costs and reduce staff. Thus, the Coinbase platform announced plans to lay off 950 employees, which is about 20.0% of the staff. Cryptocurrency company ConsenSys intends to lay off about 100 employees, and cryptocurrency wallet operator Blockchain.com – 110. In addition, additional problems for the industry may be created by a new lawsuit by the US Securities and Exchange Commission (SEC) against the Gemini site and the Genesis credit service, which, according to the regulator, are guilty of unregistered sale of securities to investors. 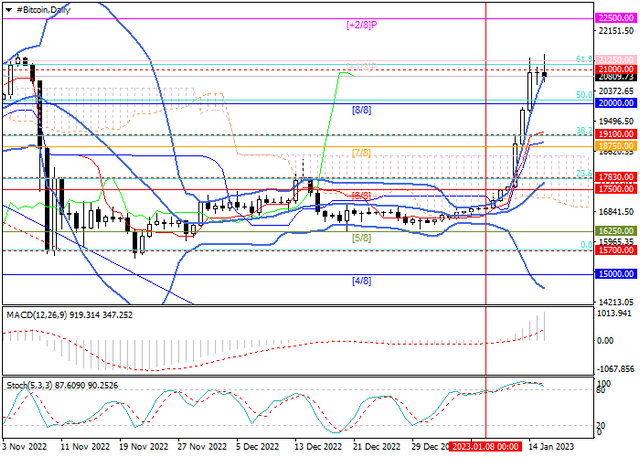 XRPUSD - The pair has stabilized after a week of growth​

In general, investor enthusiasm has somewhat weakened, and the cryptocurrency market has stabilized in anticipation of new drivers of movement. Currently, further price growth is hindered by uncertainty over the US Securities and Exchange Commission (SEC) lawsuit against Ripple. Recall that the regulator insists that the XRP token is an unregistered security, which the company does not agree with. Now the parties have submitted to the court the final versions of their arguments, but no decision has been made yet. The cryptocurrency community estimates Ripple's chances of a successful outcome of the case as high, but even in this case, new lawsuits by the department against the company are not excluded.

Investors are also concerned about the new management of the bankrupt FTX exchange gaining access to assets worth 5.5B dollars, a certain share of which are XRP tokens. It is assumed that they will be used to compensate customers for losses and can be sold, which will put additional pressure on the pair. 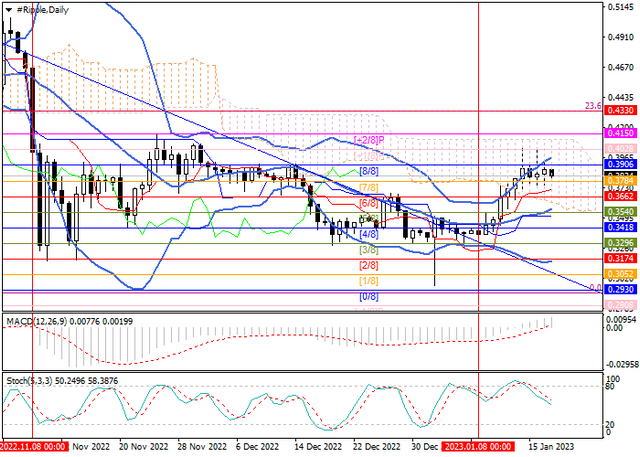 The ADA/USD pair has been growing since the beginning of this year within the framework of a general market trend: last week the price rose to the three-month highs to the level of 0.3662 (Murray level [7/8], Fibo retracement 38.2%), after which it corrected to the area of 0.3300, where it is now trading. 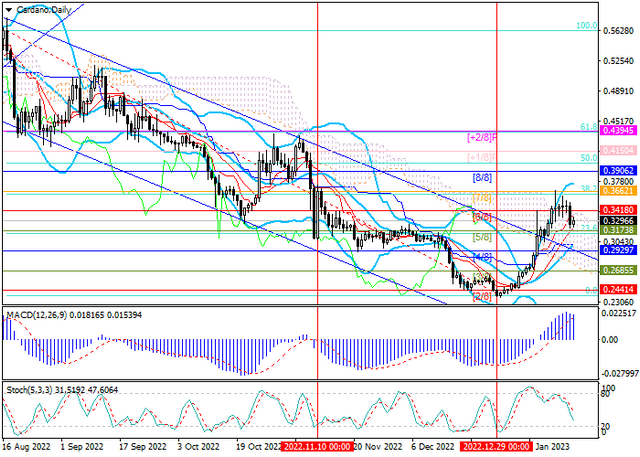 In general, the resumption of the growth of quotations in the near future seems to be a more likely scenario, since the upward trend in the pair persists, which is confirmed by the upward reversal of the Bollinger Bands. At the same time, the development of a downward correction to the area of 0.2929 is also not excluded, but the price is unlikely to go lower, since the Stochastic is close to the oversold zone, which indicates a possible upward reversal.
Resistance levels: 0.3418, 0.3662, 0.3906, 0.415 | Support levels: 0.3173, 0.2929, 0.2685​

Positive sentiment associated with monetary factors still prevails. Investors are confident that against the backdrop of declining inflationary pressures, the US regulator will start raising interest rates less rapidly, reducing the increment to 25 basis points from 50 basis points. These actions should lead to a decrease in support for the US currency and at the same time reduce the likelihood of the US economy going into recession, which increases the risk appetite of investors. 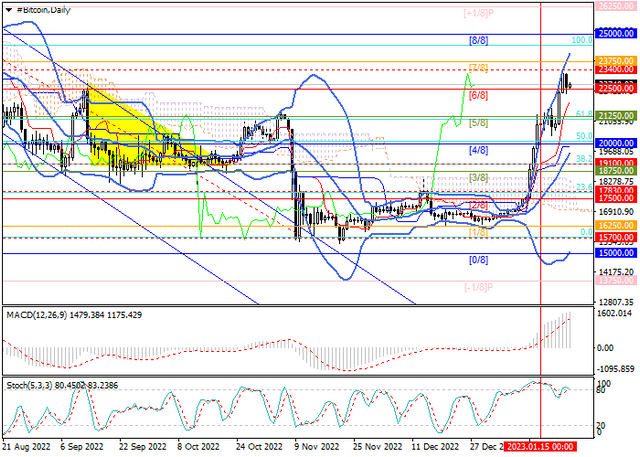 Since the beginning of this year, the ETHUSD pair has been growing within the framework of a general market uptrend: last week, for the first time since September, the quotes rose to the area of 1678.7, but now they have lost some of the positions they won, dropping to the level of 1625 (Murray level [5/8]). 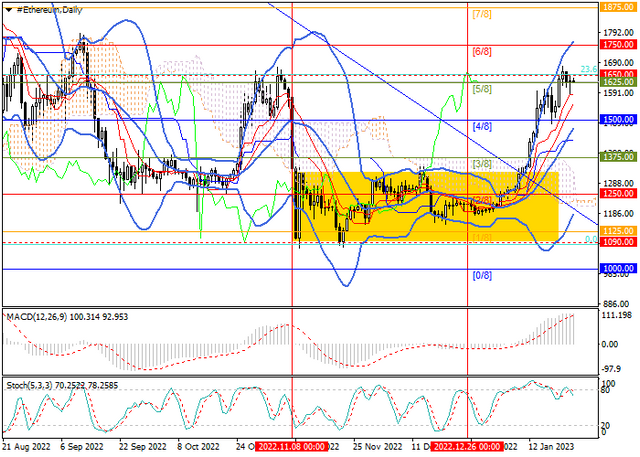 The key for the "bulls" is currently the level of 1650 (Fibo retracement 23.6%), consolidation above it will give the prospect of further growth to the levels of 1750 (Murray level [6/8]) and 1875 (Murray level [7/8]). In general, the upward trend in the market remains, as evidenced by the upward reversal of the Bollinger Bands and the increase in the MACD histogram in the positive zone. The Stochastic's exit from the overbought zone does not exclude a corrective decline, but its potential is seen as limited by the 1500 mark (Murray level [4/8], the middle line of the Bollinger Bands). If the price consolidates below this level, the decline will be able to continue to the area of 1375 (Murray level [3/8]) and 1250 (Murray level [2/8]), but so far this scenario seems less likely.

The XRPUSD pair has been growing within the general market trend since the beginning of this month, and this week has reached 0.4290 for the first time since November. 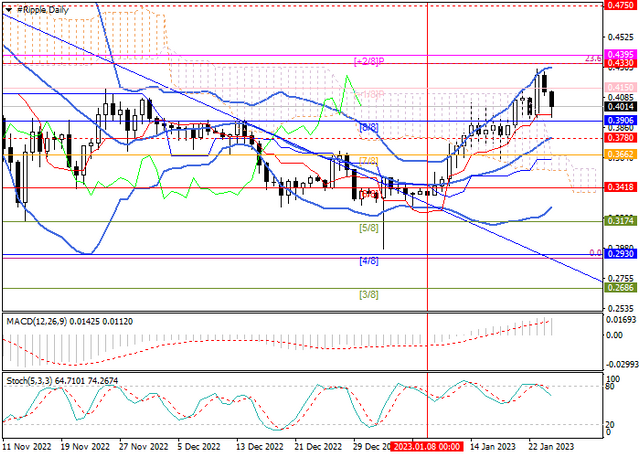 XRPUSD - The Pair is in a State of Uncertainty​

Experts associate the downward correction, which is common for most digital assets, with the expectation of today's results of the US Federal Reserve meeting: the market is ready to soften the "hawkish" rhetoric, but investors are afraid to hear hints that the monetary policy tightening cycle will last a long time, so they remain calm and are in no hurry to buy risky assets.

The growth of quotations is hindered by the uncertainty associated with the suit of the US Securities and Exchange Commission (SEC) against Ripple, the verdict on which should be issued soon: the agency accuses the company of issuing an unregistered security (XRP token) and illegally distributing it in the amount of 1.3B dollars. Separate claims concern the management of the corporation: the company's CEO, Brad Garlinghouse, and its co-founder Chris Larsen, who, according to officials, received 600.0M dollars from the sale of their own coins. Investors were alarmed by the appointment of Monica Long, who previously held the position of general manager, to the post of president of Ripple: analysts believe that the current management of the company allows the outcome of the trial to be negative for her and seeks to prevent chaos in management in the event of serious legal consequences for Garlinghouse and Larsen. 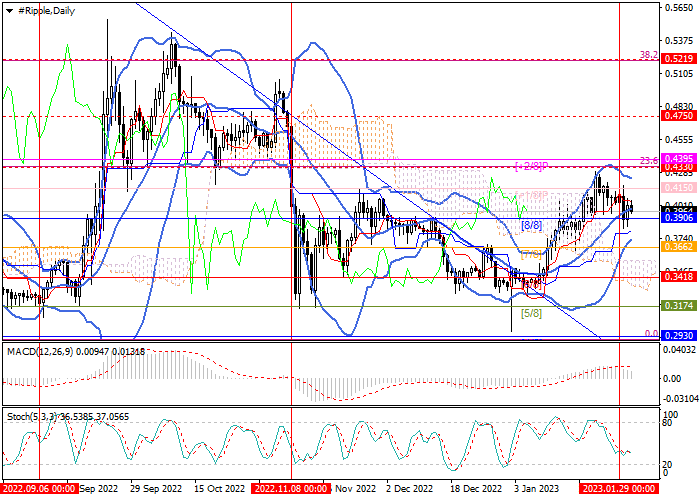 Cryptocurrencies gained on the wave of Jerome Powell's comments and the double-dip of the previous 25bp US rate hike. Although the Fed is far from declaring victory over inflation, and Powell hinted at a possible return of inflation if the central bank does 'too little,' markets particularly liked the comments regarding the 'global disinflation' process that has begun. As a result, the largest cryptocurrency is struggling to rise near its summer 2022 highs.​

The sudden surge of interest in Bitcoin in 2023 caused a massive increase in the average daily number of transactions on the network. Their number has grown exponentially from less than 200,000 to nearly 350,000 in a month, the largest increase in the history of a major cryptocurrency.

Bitcoin chart, H4 interval. The largest cryptocurrency remains above the SMA200 (red band) and SMA100 (black band), which is also the lower limit of the upward formation. Bitcoin has also reached the vicinity of the summer 2022 maxima, although this is the second time it has been pushed back by supply from levels above $24,000. The 50 SMA average (blue band) is approaching the cross with the SMA200, which in the past has most often heralded a prolonged price rebound, and has also crossed the SMA100 for the first time in nearly 10 months, which was a resistance even during summer of 2022.​
Show hidden low quality content

A
ECN vs. Market Maker Comparison