The ETHUSD pair is trading within a wide long-term descending channel, however, in the last three weeks the decline has slowed down, and the price has formed a sideways range of 1000 -1250. Currently, the quotes are close to its lower limit, the breakdown of which will allow the downward movement to continue to the levels of 750, 500 (the lower band of the descending channel). With a breakout of 1250, growth will be able to resume to the area of 1500, 1750. The long-term downward trend in the asset remains, however, to strengthen it, quotes need to break through the current side channel. This may take some more time, which is confirmed by technical indicators illustrating the uncertainty of the market: the Bollinger Bands are horizontal, the MACD histogram is stable in the negative zone, and the Stochastic is directed downwards, but close to the oversold zone, which can become a catalyst for a reversal.

Today, the price is attempting to rise against the backdrop of positive judicial news for Ripple. Earlier, the court rejected the requirement of the US Securities and Exchange Commission (SEC) to recognize the comments of the former head of this regulator, William Hinman. During his tenure, Hinman stated that the SEC does not consider Bitcoin and Ethereum as securities, and therefore XRP, since it is not very different from ETH. If this can be proved to the court, then Ripple is likely to win the dispute with the American regulator. However, positive court news is unlikely to lead to a significant increase in the pair, since the cryptocurrency market is now dominated by negative monetary factors. The US Fed continues its cycle of raising rates and may increase them by another 75 percentage points this month, as it still fails to curb inflation. In the event that June data released today confirms an 8.8% increase in prices, the regulator’s actions may become even sharper, which will lead to a new outflow of investors from the digital asset market. 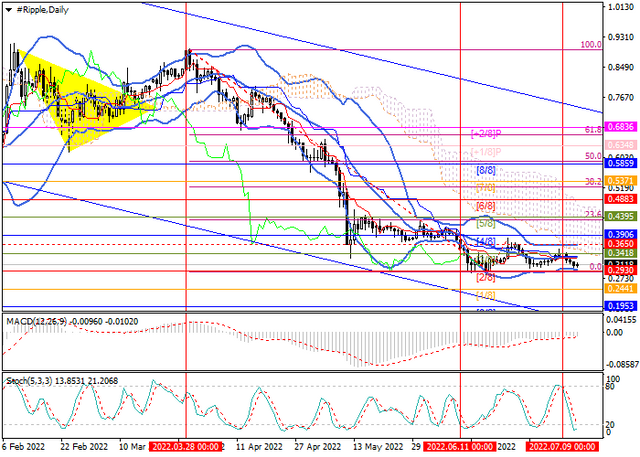 The price is close to 0.293, consolidation below which will give the prospect of further decline to the levels of 0.2441 and 0.1953. A breakout of 0.3650 can cause growth to 0.4395 (Fibo retracement 23.6%) and 0.4883. Technical indicators do not give a single signal: the Bollinger Bands are horizontal and are consolidating, as it happens before a serious price movement, the MACD histogram is stable in the negative zone, and the Stochastic is directed downwards, but approaching the oversold zone, which is fraught with a reversal.

The BTCUSD pair continues to trade within the framework of a long-term downtrend, however, in the last few weeks the decline has slowed down, and the price has formed a sideways range of 18750 - 22500, within which it remains at the present time. Now the quotes of "digital gold" are testing its upper limit, the breakout of which will allow us to continue moving to the levels of 25000 and 28125. The key for the "bears" is the mark of 18750, at the breakdown of which the downward dynamics will resume to the range of 15625, 12500 and 10000. 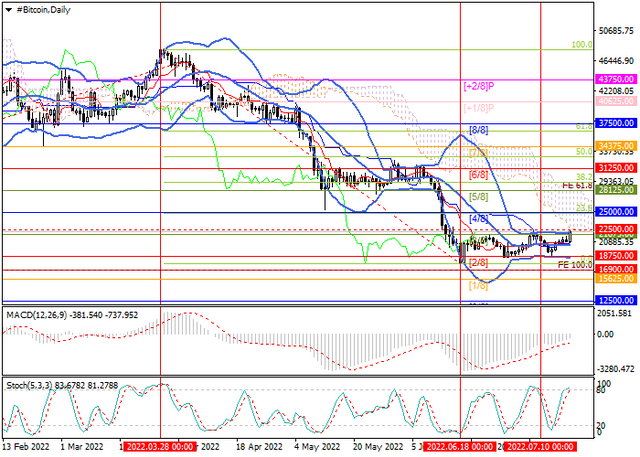 In general, the long-term downward trend is still maintained, but in order for it to continue, quotes need to break through the current side channel. Judging by the indicators illustrating the uncertainty of the market, a trend change is unlikely in the near future, and the price will continue to move sideways. 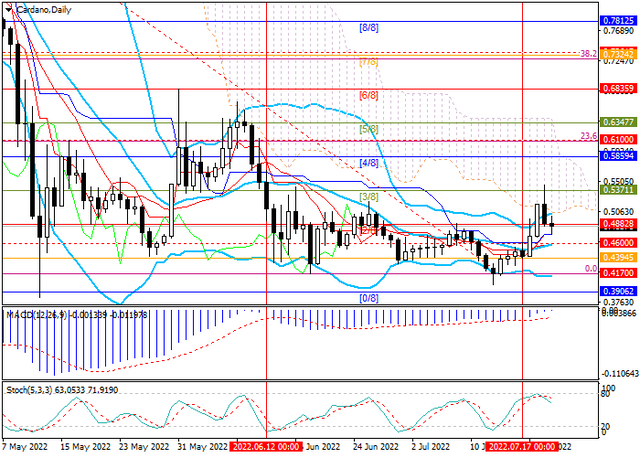 Technical indicators show opposite signals: the Bollinger Bands are reversing upwards, and the Stochastic is reversing downwards, while the MACD histogram is at the zero line and its volumes are insignificant.

The current recovery of the positions of digital instruments so far looks like a temporary correction and an attempt to get prices out of two months of uncertainty, but it is unclear whether it will lead to a reversal of the long-term downward trend. Nevertheless, experts of the financial conglomerate JPMorgan Chase & Co. note the restoration of retail investors' interest in cryptocurrencies, which was provoked by the rapid transition of the Ethereum network from the Proof-of-Work (PoW) algorithm to Proof-of-Stake (PoS). Indeed, during the week, ETH became the leader of growth in the market, which is associated with the designation of the timing of a new network update. The company's lead developer Tim Beiko posted on Twitter a merger plan scheduled for September 19, noting that this is not yet the final date. Nevertheless, the message aroused interest in the second cryptocurrency from the bidders and served as a catalyst for the growth of its rate. The transition to PoS should ensure an improvement in the scalability of the network and a significant reduction in its energy consumption, in addition, token mining will be reduced. Later, the creator of Ethereum, Vitalik Buterin, said that in the long term, the network will reach a data processing speed of 100K transactions per second. The growth of ETH quotations has become a driver of upward dynamics among other market leaders, but so far it does not look stable, since long-term negative factors persist. Thus, the US Fed continues to tighten monetary policy, fighting inflation and strengthening the dollar, and doing so more aggressively. At the same time, the probability of a global recession is seriously increasing, which forces investors to abandon risky assets, including cryptocurrencies. Meanwhile, companies focused on digital assets are experiencing difficulties. Last week it became known that the hedge fund SkyBridge Capital temporarily suspends payments on investment units, and the American cryptocurrency exchange Blockchain.com reported the dismissal of 25% of its employees due to the difficult situation in the market. Gemini trading platform, whose management has already cut 10% of the staff, intends to lay off another 7% of specialists in order to reduce costs. In general, the long-term pressure on the cryptocurrency market and its participants will only increase.

During the week, a number of statements were made by leading representatives of the global financial and political elite. For example, US Senator Elizabeth Warren called on colleagues to take a tougher stance on the regulation of digital instruments due to recent problems with the companies Vauld, Celsius, Voyager and BlockFi. According to the official, many participants of the crypto market are scammers who risk investors' capital. The most dangerous, in her opinion, is the DeFi segment. In turn, the head of the US Securities and Exchange Commission (SEC), Gary Gensler, said that cryptocurrency lenders should be controlled by analogy with investment firms. He stressed that the regulator treats digital assets neutrally, but will take all necessary measures to protect the interests of participants in the crypto sector. British Finance Minister Nadhim Zahavi presented to parliament a bill clarifying the procedure for using stablecoins in the country, indicating that stable currencies can increase the efficiency of transactions. The document, in particular, establishes measures to protect investors and the degree of compensation for their losses in case of fraud, and also clarifies the standards for the use of stablecoins for making payments in retail and banking.

Next week, the quotes of most cryptocurrencies may consolidate or resume a decline.​

The growth of cryptocurrency quotes was due to monetary reasons. Yesterday, the US Federal Reserve chose a more cautious tactic of tightening monetary parameters, increasing the interest rate by only 75 basis points instead of 100 basis points, as predicted by many experts. The regulator also recognized the possibility of reducing the indicator's adjustment rate to assess the impact of the steps taken on the state of the national economy. These statements put pressure on the US currency and strengthened the positions of the main competitors, including digital assets. However, the current quote rise may be temporary, as long-term pressures on the cryptocurrency market persist. First, the US Federal Reserve is not at all abandoning its intended "hawkish" course to fight inflation, and even if its pace slows down, the tightening policy is likely to continue. Also, in the context of the global economic crisis, interest in risky assets is declining, which is also reflected in the dynamics of cryptocurrency rates.

Short-term support for the quotes of the ADA/USD pair may be provided by the launch of the Vasil update, scheduled for August. The hard fork should lead to a significant increase in network scalability and expand the use of smart contracts. However, even with great technical improvements, monetary and economic factors will continue to pressure the instrument's positions. 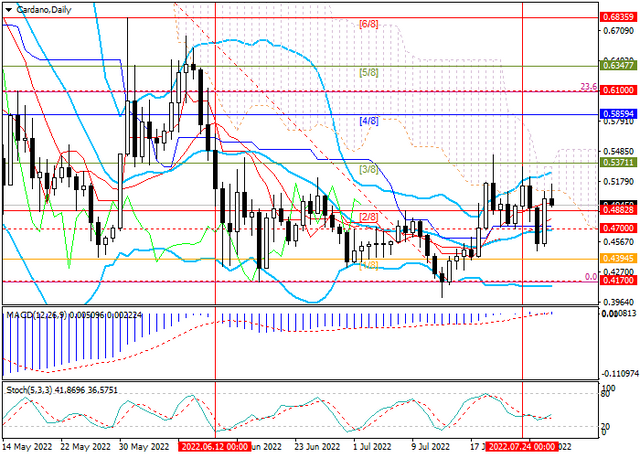 The ADAUSD pair continues to trade in a long-term downtrend. However, in the last few months, the decline has slowed down. Currently, the key "bearish" level is the middle line of Bollinger bands (0.47). After its breakdown, the quotes can return to 0.4395 and 0.4170, otherwise, growth will resume around 0.5371 and 0.5860. 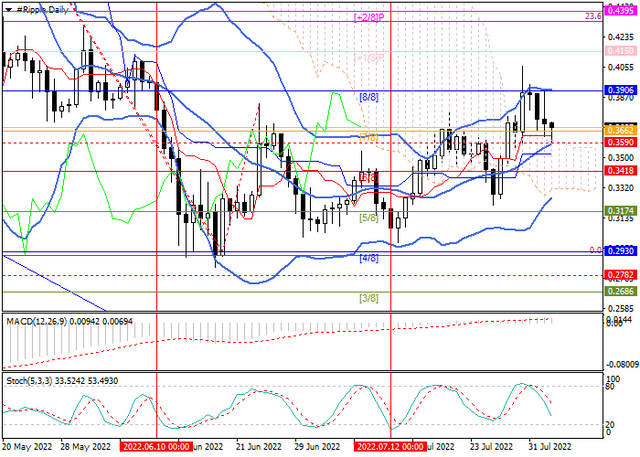 The short-term uptrend persists, which confirms the upward reversal of Bollinger bands and the stabilization of the MACD histogram in the positive zone. However, a downward reversal of Stochastic does not rule out a reversal of the current trend and the quotes returning to the previously formed sideways range of 0.2930–0.3660.